The Bonnies and the Breakaway Brother

Trademark disputes over liquor branding never failed to gain attention in the pre-Prohibition era.   When the conflict involved brother against brother in the distilling hotbed of Louisville, Kentucky, interest could be intense. That is the situation that faced the Bonnie brothers when one of their siblings broke away, started a completing company, and merchandised whiskey with the Bonnie name and a familiar-looking label.

The 1870 Census recorded Frank living in Versailles Township in Woodford County, Kentucky, with his wife and baby.   His occupation was given as “merchant.”  In 1872 the Louisville business directory listed a new whiskey wholesaler located at 29 Fourth Street between Main and River near Water Street.  It was called Bonnie, Murphy & Co.  Within two years, Murphy had departed and the company had reorganized as Bonnie & Co.  Frank Bonnie was listed as head of the firm.  William O. (right) and Robert P., shown below, were part of the management.  In 1879 the firm reorganized and all four Bonnies, including youngest brother Ernest, were involved in its operations.  They called their company “Bonnie Bros.” 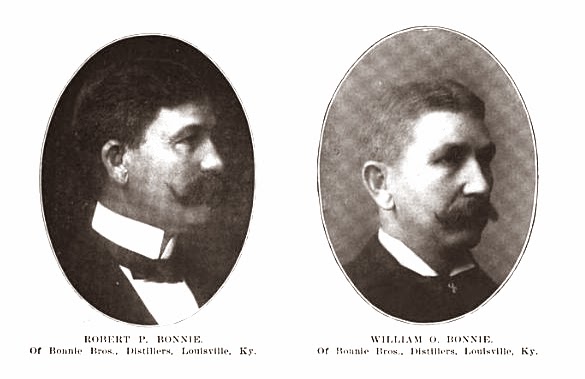 For the first 20 years of its existence as “rectifiers” (blenders) of whiskey and wholesalers, the Bonnie firm was dependent on drawing liquor from a range of Kentucky distillers.  Among them were the J.B. Wathen & Bro. Distillery (RD #363 in the 5th District of Kentucky) and the Fern Cliff Distillery (RD #409, 5th District).  Both plants were major producers of raw whiskey for companies who were wholesalers and rectifiers, some claiming to be distillers in their own right.  The Wathen distillery, founded in 1880 and located not far from Louisville,  had a mashing capacity of 2,000 bushels daily and storage for 83,000 barrels. The Fern Cliff Distillery, founded in 1883 and located inside the city, was smaller, with a daily mashing capacity of 800 bushels and storage for 25,000 barrels. The Bonnies also are recorded in government documents as drawing whiskey from the Crystal Springs Distilling Co., a  smaller Louisville operation that had been founded in 1867.

Being totally dependent on outside sources for their whiskey was often a difficult situation for the Bonnies.  Competition for those stocks among Louisville and other Kentucky liquor wholesalers could be fierce.  Prices too often were elevated and supplies short.  Little wonder then that after almost two decades of such problems the brothers looked around to buy a distillery of their own. They found one right in their home town.  It had been constructed about 1883 by J. B. Mattingly, from a noted Kentucky distilling family.  While the record is not entirely clear, it appears that the Bonnies bought the property about 1890 when Mattingly was forced into bankruptcy.  Insurance underwriters records compiled in 1892 indicate that the distillery was relatively new and located between Bank and Tyler Streets.  In addition to a frame still house,  the facility had two warehouses that were brick with metal or slate roofs.  A barn for cattle, to whom spent mash was fed, was located 235 feet north of the still house.  Over time, the Bonnies would add other buildings.  A wooden saloon sign, shown here, presented a picture of the expanded facility. 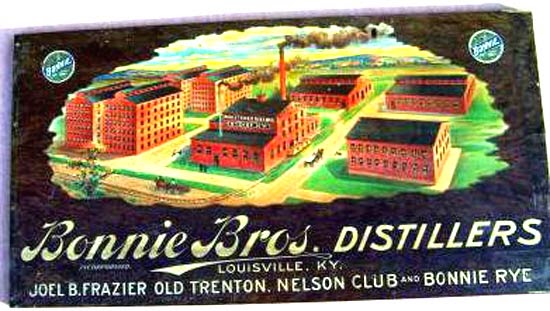 Owning their own distillery gave Bonnie Bros. the freedom to greatly expand the number and variety of their liquor brands.  The four featured on the sign -- “Bonnie Rye,”  “Nelson Club,”  “Old 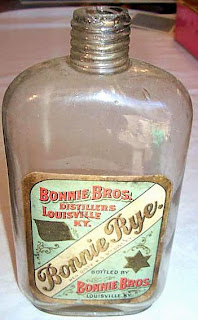 Trenton,” and “Joel B. Frazier” - were “flagship” labels, but the firm featured more than a half dozen others.  Among them were “Belmont,” “Big Rock,”  “C. C.,”  “Kentucky Turf,”  “W. H. Kirby,” and “Woodford County,”  Their most unusual brand was “Dog On Good Whiskey” that featured the profile of a

canine on the label.  Federal record indicate that of these the Bonnies trademarked Big Rock, C.C. and Joel B. Frazier in 1906 and, as will be seen, more importantly, Bonnie Rye and Bonnie Bourbon.

The brothers marketed their whiskey in both glass and ceramic containers.  They also were merchandising far beyond the bounds of Louisville and Kentucky.  Shown below right is a Bonnie

postcard that featured a comely lass bearing an armload of roses/  The other side told a potential customer -- likely a local dealer or saloon-- that the brothers'  representative soon would be in their town and dropping by.  That company man probably would not come empty handed.  He might present his contact with a shot glass advertising  Bonnie Rye,  a back of the bar bottle to hold Old Bonnie, or a watch fob with the “Dog On.”

As their company continued to grow and prosper, both William O. and Robert P. Bonnie were gaining recognition as outstanding Louisville businessmen.  The photo of the brothers above are from the book, “Notable Men of

Kentucky at the Beginning of the 20th Century,”  published in 1902.  By that time William O. Bonnie was living with his family of six and three servants in a large house in Louisville.  William’s first wife having died, he had remarried. She was Katherine, a woman some 27 years younger, who had been born in Ohio. The couple had three young  children of their own, ranging in age from 2 to 8 years. William’s two boys from his earlier marriage were also in the household.  Meanwhile, Robert P. Bonnie had married Maude Johnson Williams in 1880.  They would have a family of four, three of whom would graduate from Yale University including a daughter, Shelby, and two sons, Robert P. Jr. and Hundley. 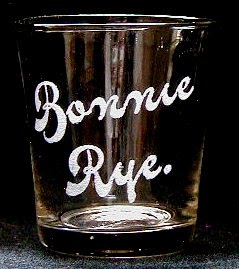 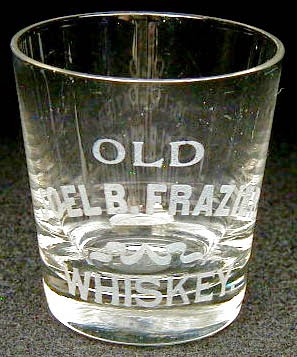 In 1895, Frank Bonnie, age 55, withdrew from the firm, selling his interest in the business, including the whiskey brand names to his remaining three brothers.   His share must have been lucrative.  In the next U.S. census, asked his occupation, Frank replied “Capitalist,” indicating that he was investing, most likely in Louisville real estate.  Frank’s exit was followed in four years by Ernest Bonnie, apparently still in his 30s, wanting out.  Why he broke away has not been explained.  The remaining two Bonnies bought him out for $70, 000, more than a million in today’s dollars.  For that compensation Ernest sold all interest in the business and in the

Unlike his brother Frank, however, Ernest Bonnie had no intention of retiring from the whiskey trade. Taking two Bonnie Bros. employees with him, he shortly thereafter went into competition with his siblings using the name, E.S. Bonnie & Company.  A trade card with that company name appears on an intriguing trade 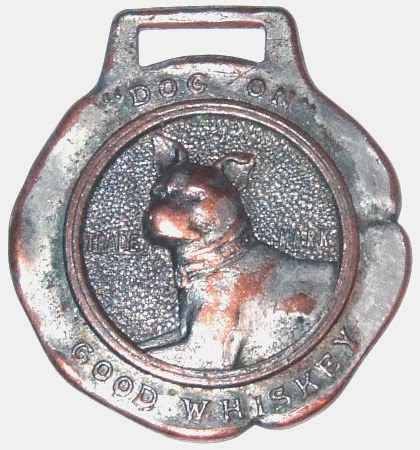 card showing a boy urinating in the snow and tracing the words “Good Drink.”  Was this a symbolic gesture by a young “breakaway”  who was trying to send a message to his older brothers?

After a series of partner changes,  Ernest in 1903 incorporated the firm and changed its name to Bonnie & Company.  Although he initially had sited his firm on Second Street within a year he moved to the 600 block of Louisville’s Main Street,  known as “Whiskey Row,” a prestige location where Bonnie Bros. Company had long been ensconced.    More important,  Ernest Bonnie began 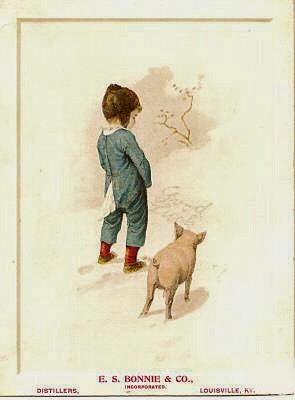 selling whiskey under the brand name, “Bonnie Club.”  His older siblings quickly objected that the use of that brand pirated labels of Bonnie Bros.  After a heated exchange of correspondence on the subject Ernest abandoned the use of the label “Bonnie Club.”

In 1907, however, he died and his firm passed into other hands, some of them likely the former Bonnie Bros. employees.   The new management issued a brand of whiskey that carried the label “E.S. Bonnie Rye.”  It then dropped the letters “E.S.” and began to sell “Bonnie & Co. Rye” with a label, though differing in some respects from the Bonnie Bros. label was very similar in its most notable features.  William and Robert Bonnie had had enough and in 1914 took its competitor to court for trademark infringement.   After a Louisville court found in favor of Bonnie Bros.,  Bonnie and Co. appealed the decision to the Kentucky Supreme Court.

The appellants argued that the Bonnies had not entered into the court proceedings with “clean hands” and thus were not entitled to relief.  They argued that the Bonnie Bros. label was a violation of the Federal Food and Drug Act of 1906 because the law had been interpreted by some as meaning that “rectified” or blended whiskey should be labeled as “imitation” whiskey.  Straight whiskey producers in Kentucky were arguing for that interpretation in Washington.  The Kentucky Court disagreed noting that Bonnie Bros. plainly had labeled their product as a blend and that was good enough. In upholding the lower court ruling, the panel of judges asserted that Bonnie & Co. Rye had been labeled in a way to confuse and deceive consumers and represented “unfair competition” under the trademark laws. 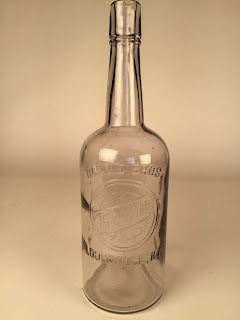 Despite the competition set in motion by their brother,  the other Bonnies were expanding their Louisville facilities.  By 1910 the distillery was mashing 200 bushels per day and had four warehouses with the capacity to store and age 27,500 barrels.  During this period,  William O. Bonnie was the president and had brought two of his sons into the operation.  W.O. Bonnie Jr. was vice president and Herbert T. Bonnie, treasurer.   Robert’s daughter, Shelby, put her Yale education to good use as a company officer, but unfortunately died at the age of 33.

As the 20th Century completed its first decade, the Bonnies became increasingly aware of the pressures of Prohibition forces.   A pro-Dry U.S. Congressional hearing into efforts  to fight the Temperance Movement featured a letter from Bonnie Bros. to an official of the Angelina County Liquor Dealers Assn. of Luftkin Texas.  The letter was in response from the Texans for money to fight a statewide prohibition referendum.  The Bonnies pointed out that they had sent the group a substantial amount of money earlier and added “We have done about all you can expect us to do....”

No matter how much the Bonnies contributed to the “Wet” cause, statewide bans on liquor proliferated and in 1919 National Prohibition was enacted.  Bonnie Bros. was forced to close.  After Repeal family members attempted to restart operation but ultimately they were not success and sold out in 1938.  Under several owners, the distillery survived until 1977 when it was closed forever.  Nonetheless, the longevity of their whiskey-making indicates that the Bonnies,  despite the “breakaway” brother,  had created something special in Kentucky.

Posted by Jack Sullivan at 8:59 AM