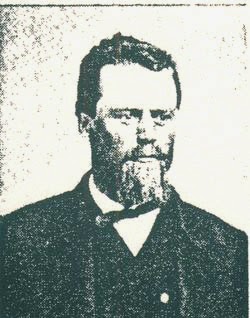 Among those who help to found the West the saloonkeeper and the liquor dealers often played a particularly important role in establishing businesses.  Cyrus Jacobs, shown here, brought whiskey along with other valuable merchandise to the frontier and thereby established his status as a pioneer of considerable rank in the state of Idaho.

Born in Pennsylvania,  Jacobs’ path through life took him progressively West.  At age 17 the U.S. 1850 census found him in Muscatine, Iowa, working as a grocer.  Two years later he had moved on to Oregon.  There in 1856 he found a bride in the lovely and accomplished Mary Ellen Palmer, shown here.  She was the daughter of an acknowledged 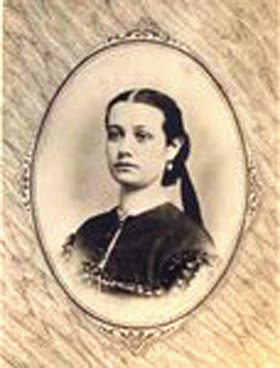 pioneer of the American Northwest, General Joel Palmer,  and a woman obviously accustomed to life on the frontier.  Two years after they wed,  Jacob and Mary Ellen moved to Walla Walla, Washington,  where Jacob opened a general store in which whiskey was a major commodity.

After the 1862 discovery of gold in the Boise Basin across the border in Idaho, Cyrus secured a pack train, loaded it with supplies (including whiskey),  added in Mary Ellen and their new baby, and traveled with the earliest miners to what had been a U.S. military fort, a outpost in the Indian war, called Fort Boise, shown here.

Jacobs opened a store in a tent and and continued to import merchandise using freight teams and pack trains to supply the needs of the miners.  As the town grew, the requirement for more permanent structures and a street layout was paramount.  Jacobs was called upon to work with his neighbors to plat the city of Boise in 1863, the same year it was incorporated. Below is the main drag as it looked in 1866,  with conestoga wagons, muddy street and low frame buildings. 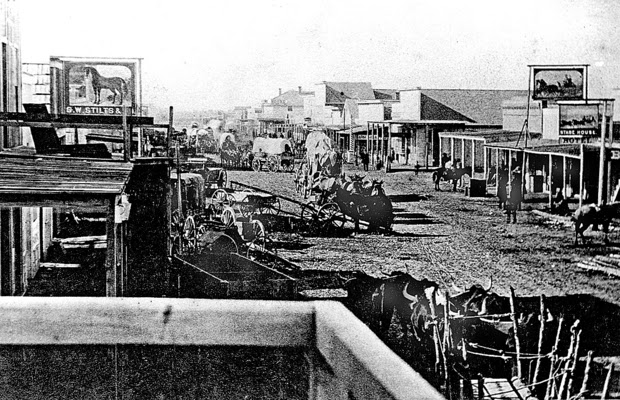 Several structures belonged to Jacobs.  In addition to his general store he built the first flour mill in the town, called the Boise City Mills, as well as a meatpacking plant.  Later he would add a soap factory and cooperage. Ever mindful of the raging thirst for whiskey that miners often exhibited, he made whiskey a primary product , calling himself a “distiller.”  This attribute appeared on Jacobs’

letterhead along with the information that he also sold wine, liquor, cigars and vinegar.   His flagship

With wealth generated through the Boise mining boom,  Cyrus built Mary Ellen the first brick house in Boise,  a two level structure at what is now 607 Grove Street. It required him to transport the building materials from Walla Walla from Boise by oxen over the mountains. Mary Ellen decorated their landscaping with lilac bushes and other flowers, grew a vegetable garden, and is said to have “filled their house with music and laughter.” The Jacobs house acted as a magnet for other newly rich Idahoans.  Grove Street became one of the most opulent areas of Boise with mansions surrounded by gardens and orchards.

On Grove Street the Jacobses raised a family of five children:  Mary (Mamie), Alexander Palmer (Palmer), Carrie, Edith and Fannie.  Another child died in infancy.  Here is a photo of the couple with two of their children on the front porch of the Grove Street house.  They also adopted an Native American girl they called Minnie.  A biographical note told the story: "Minnie’s parents were killed somewhere in this region, a result of a skirmish with the U.S. Army stationed at Fort Boise. Minnie died of a disease as a teenager while living with the Jacobs family and was buried in a “pleasant place,” which is all that is known about her grave and its whereabouts."

In addition to his mercantile pursuits, Jacobs owned mines and was investing heavily in gold and silver exploration in Idaho.  When silver prices crashed, the resulting economic downturn was a financial blow.  Not only were his mining properties worth little or nothing, the market for his mercantile goods slumped significantly.  Even whiskey sales sank as saloon after saloon in Boise closed as miners decamped.   Adversity, however, seemed to bring Jacobs’ entrepreneurial qualities to the fore.  He became an officer in the new Boise electric streetcar company and figured a way that his now-defunct flour mill could become the site of its powerhouse.  Politically Jacobs served a term on the Boise City Council, subsequently was elected City Treasurer, and then served two terms as 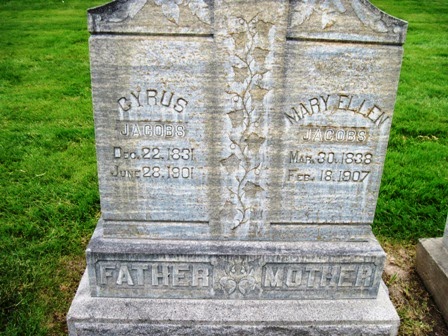 Mayor.  As he aged he and Mary Ellen continued to live in their Grove Street home.   The 1900 census found them there, wedded 40 years, their daughters married and gone, living with their only son Palmer, who was working in his father’s store..

At the age of 69 in June 1901,  Cyrus Jacobs died.  Mary Ellen followed him in February 1907 at 68 years.  They are buried together in the fittingly named Pioneer Cemetery in Boise.  They share a headstone that identifies them fondly as “Father” and “Mother.”  Tragedy would meet the family years later when son Palmer, recorded as a “wealthy farmer,” killed himself by jumping from a window of the Idanaha 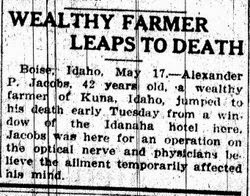 Hotel in Boise.  A newspaper story suggested that he had been crazed by the pain from an eye ailment.

Although the mercantile and mining efforts of Cyrus Jacobs have long been erased, including his “Jacobs Best Rye Whiskey,” the Grove Street house lives on in the National Register of Historical Places, represented by a plaque on its picket fence.  After the pioneer Jacobses died, their home became a boarding house for Basque miners and functioned as such until 1969. In that capacity the building served for a variety of functions that gave the foreign miners an environment to maintain their ethnicity and yet ease the transition to living in America.  As a result, the house that Cyrus built for Mary Ellen with the proceeds from his liquor trade is the now Basque Museum and Cultural Center in Boise.  Open for tours. 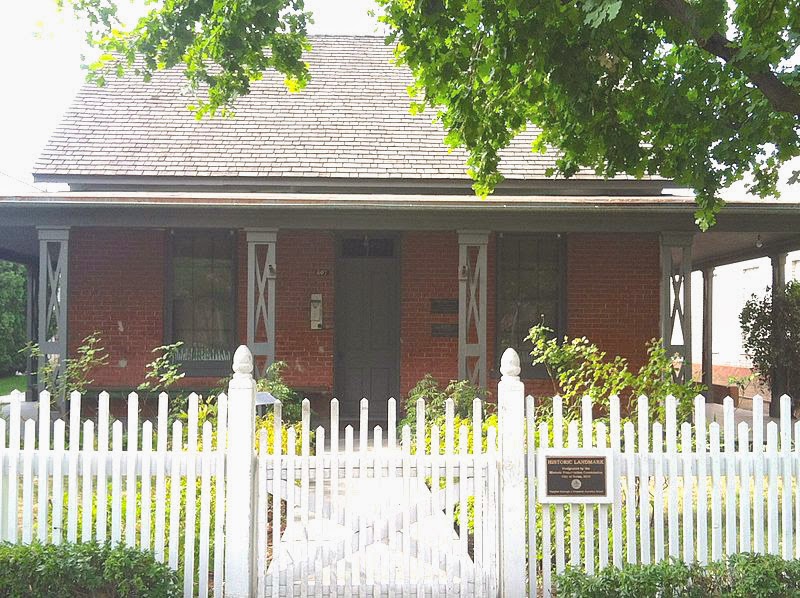 Posted by Jack Sullivan at 8:23 AM