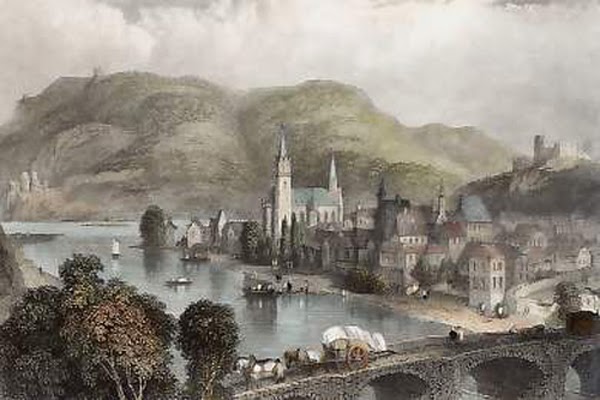 "I saw the blue Rhine sweep along,— I heard, or seemed to hear,
The German songs we used to sing, in chorus sweet and clear;
And down the pleasant river, and up the slanting hill,
The echoing chorus sounded, through the evening calm and still;
And her glad blue eyes were on me, as we passed, with friendly talk,
Down many a path beloved of yore, and well-remembered walk!
And her little hand lay lightly, confidently, in mine,—
But we'll meet no more at Bingen,— loved Bingen on the Rhine."

The picture above is of the German town called Bingen on the Rhine.  That is also the name of the poem of which one stanza appears here.  Bingen is a picturesque town of 25,000 sited at the point where the River Nahe empties into the Rhine Gorge. It is surrounded by low forested mountains.  Aaron Blade left Bingen as a youth to emigrate to the United States and thence to Milwaukee where he operated a successful liquor dealership a few blocks from Lake Michigan. Aaron Blade, shown here in maturity, was born in Bingen of German Jewish parents in December 1828 and was educated in the local schools.  At the age of 20 in 1848 he left mother and father to travel to America.  For all the beauty of its setting and the Germanic romanticism connected with Bingen, over the years the town had proved inhospitable to Jews.  During the 13th Century  religious officials there are said to have regularly extorted sums from Jewish moneylenders.  Jews were expelled from Bingen in 1507 and did not return until the second half of the 16th Century.   Strong evidence exists of a persistent anti-Semitism in Bingen and possibly one of the reasons Blade left.

The Wisconsin city in which he settled bore some resemblance to his homeland.  Milwaukee was a German town.  The population at that time was predominantly of German ancestry.  German commonly was spoken on the street and in homes.  There were German schools, German churches, German newspapers and German social and sports clubs.  The city had also attracted a number of German brewers and the sweet smell of mashed barley permeated the air.  Milwaukee was “Beertown.”

Aaron Blade, however, was selling whiskey.  In 1860, after serving an apprenticeship working for other merchants,  he founded his own wholesale liquor house on Milwaukee’s Water Street, shown below.  It was an avenue that held a number of liquor dealerships, both wholesale and retail, as well as a proliferation of saloons.   Although beer was the predominant booze passed over the bar,  whiskey made serious headway among the Milwaukee drinking public during the latter half of the 1800s. 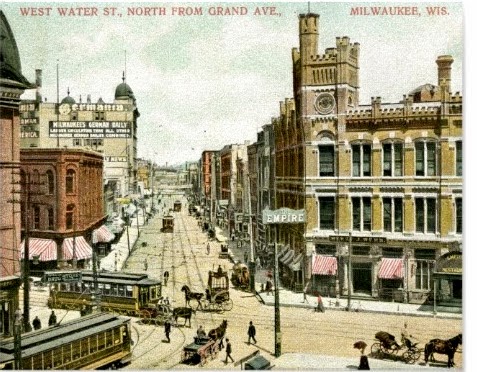 The man from Bingen was credited with helping to change tastes.  A book called “Milwaukee - A Half Century,” published in 1896  suggested that in the past whiskey sold in Milwaukee had fallen short of being “harmless and healthful.” The author indicated Aaron Blade was altering attitudes with his flagship label, called “Old Dave Jones,” asserting:  “This is a matchless brand of whiskey which has achieved a popularity second to none in the market, and whether for social indulgence or medicinal use it has few equals and no superiors.”   In addition to this proprietary offering,  Blade also was handling as a specialty “Springside” fire copper whiskey from Nelson County, Kentucky, and was sole agent for the “P. B. Kavanaugh” brand.

About the time Blade had established his business in Milwaukee he also had married.  His wife, Emma, was a immigrant from France.  Aaron and Emma would have two children, Alexander born in 1862 and Bertha born in 1869.   As Alexander came to manhood, his father in 1882 made him a partner in his liquor house.  He followed by admitting his nephew, Max C. Blade, into a management role. Incorporated in 1896, the firm was known as A. Blade & Son Company: Importers and Jobbers of Fine Kentucky Whiskies, Wines and Liquors.

The Blades’ business occupied an entire four-story building at 281 East Water Street.  Containing a basement and more than 25,000 square feet, it was constructed entirely of brick and, it was said, “perfect in convenience of arrangement for storage, inspection and sale.”  Presumably the structure also had space for the blending and compounding operations that resulted in Old Dave Jones Whiskey.  This headquarters also supported the vigorous sales efforts that

took company representatives, including Aaron himself, throughout Wisconsin, Michigan, Minnesota, and Iowa.  Additionally, Blade advertised in newspapers as far away as the West Coast.  He also gave away etched shot glasses bearing the ad logo illustrated here.

As the liquor business grew, the firm moved into even larger quarters.  Its new building, shown at left in an illustration, had been constructed in 1876 at 241-243 East 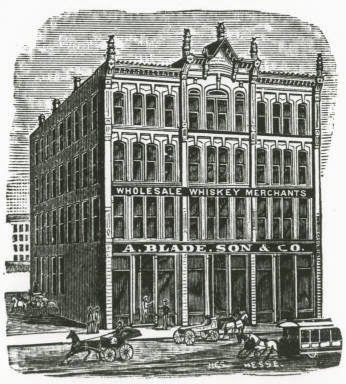 Water Street.  Known then as the Blade & Son Building,  it still stands in Milwaukee and is on the National Register of Historical Places.  The new address was reflected in a trade card from A. Blade, Son & Co. who now designated themselves as “distillers.”  There is unconfirmed evidence that the company may have invested in one or more Kentucky distillery.

Then tragedy struck.  On December 15, 1903, Blade’s son and heir apparent, Alexander, checked into in Milwaukee’s premier hotel, the Pfister, shown right, went to his room and killed himself.  He was 40 years, 5 months and 11 days old, and left a wife, Sarah, and a young 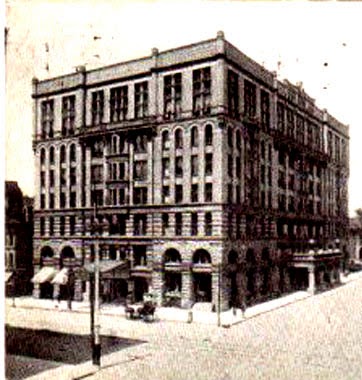 son.  His suicide, for whatever reason, must have been a severe blow to Aaron Blade and his wife, now both advanced in age.   The father continued to manage the company and even went “on the road” personally selling his liquor.  The Milwaukee Sentinel of Dec. 22, 1912, ran a story whose lead read:  “With no thought of retirement and still active in spite of his age of 84, Aaron Blade...continues to make his weekly trips through northern Wisconsin, the territory he has covered for years.”

But time takes its toll.  In 1918 his wife Emma died, apparently in an accident, the cause of her death given as “fractured neck.”  In January of the following year Aaron Blade died at age 90.  The cause given was “senility.”  He was buried in Greenwood Cemetery, a predominantly Jewish burial ground 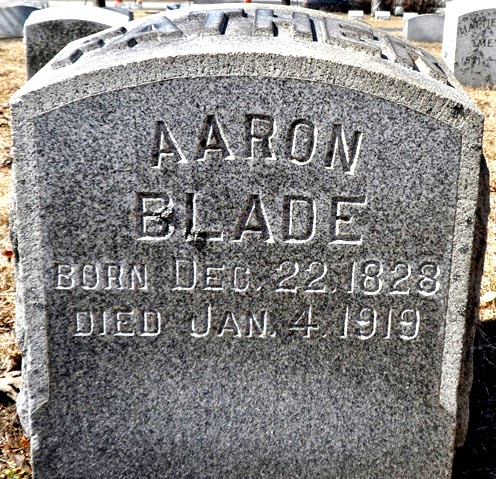 located on Milwaukee’s South Side.  Nearby is his wife and both his children.   It appears from Milwaukee directories that Blade’s liquor business had shut down about a year earlier.

What Aaron Blade found in Milwaukee was real opportunity to make a success through intelligence and hard work.   In Bingen it was a different story for the Jewish population.  When Hitler came to power in Germany in the early 1930s,  the number of Jews in the town was 465.  By 1939 as the result of flight and emigration only about half remained.  Those who were left became victims of the Holocaust.  After the war only four Jews returned.  They found that their synagogue had been destroyed in 1945.  To paraphrase the poem that opened this post:  “They met no more in Bingen, Bingen on the Rhine.”