Down the Mississippi with Pere Marquette and F. P. Gluck 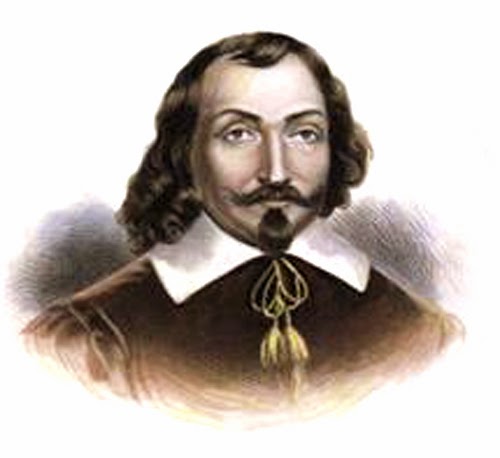 This year is the 375th anniversary of the birth of Pere (Father) Jacque Marquette, the French Jesuit priest, shown here, who with Louis Joliet in 1673  discovered the Mississippi River and traveled south on the waterway past the confluence with the Ohio River.  Over two centuries later a liquor dealer named F. P. Gluck took a similar route south from Minneapolis stopping at Cincinnati.  He celebrated his move by naming his flagship whiskey “Father Marquette 1866 Pure Rye.”

F. P. (Frank) Gluck was born in 1847 in what was then the Austro-Hungarian Empire.  When he was 14, likely with other family members, he emigrated to the United States.  He apparently spent some of his early years in Pennsylvania, likely learning the whiskey trade there.  He married a woman named Celia in 1875 and their first son, George, was born in Pennsylvania the next year.  A decade later, he moved to Minnesota and about 1886 opened a wholesale liquor house, located on Washington Avenue South in Minneapolis. 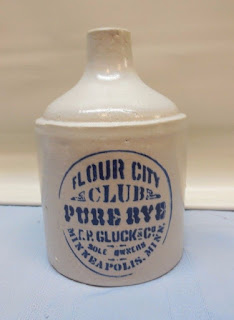 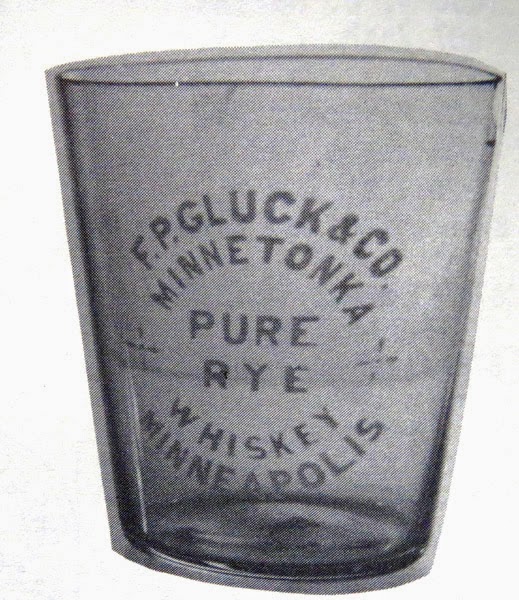 “Minnetonka Rye,” and “St. Anthony Falls” whiskey.  Each name referenced Minnesota.  Minneapolis was known as the Flour City.  Minnetonka was an area near Minneapolis sold by the Dakotah Indians to the United States in 1851.  The name meant “water big” to the Dakotah.  St. Anthony Falls was the only natural major waterfall on the Upper Mississippi River.  The falls were located northeast of downtown Minneapolis.  Gluck featured the Minnetonka name on giveaway shot glasses, along with a Maryland rye, “Old Wilson.”

Gluck’s business history in Minnesota seems to have been a rocky one.  In 1891 the State’s Attorney General took him into court charging him with violating liquor laws.   After a lower court found in his favor, the government appealed to the State Supreme Court which reversed the lower court and found him guilty.   In 1897 Gluck was back in court again in a complicated bankruptcy case, being sued by a Minneapolis bank for the equivalent of $52,000 in current' dollars.   Once again the courts ruled against him and he had to pay up. 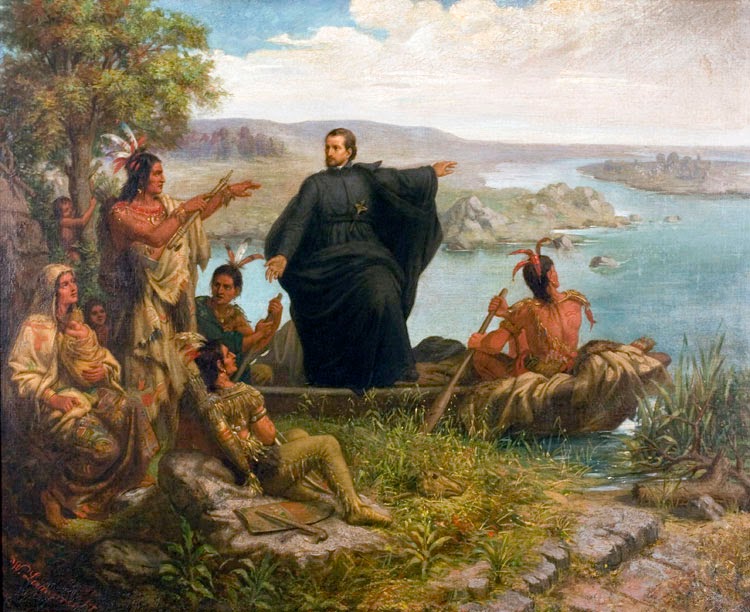 It was not long after this setback that Gluck pulled up stakes in Minneapolis, packed up his small family and followed the Mississippi south to the Ohio River, terminating his journey in Cincinnati.  Father Marquette had been guided by Indians who told him of the great river and triggered his pioneering explorations.  Although he may have had an adventurous spirit, Gluck more likely was attracted by the possibility of better business opportunities in Cincinnati.  At that time the Ohio city was a major center of the U.S. liquor industry, receiving whiskey from Kentucky distillers, often “rectifying” it by blending and compounding, and selling it through hundreds of proprietary brands.

After opening his doors at 11 Pearl Street,  Gluck joined his fellow whiskey men wholeheartedly.  He featured a blizzard of labels, including:  “Aurora Rye,”  “Barclay,” “Belle of Mt. Vernon, "Flour City Club Pure Rye,” "Kentucky Nabob,” "Lonsdale,” "Old Hermit,” "Old Westminster Pure Rye 1886,” "Old Willford,” "Pennfield,” "Rocky Side,” and "Sandy Brook.”  Although he trademarked Barclay Whiskey twice,  in 1898 and again in 1905, he does not seem to have registered the other names.

Gluck’s flagship label was the one he named for the Jesuit explorer whose path south apparently had proven to be an inspiration to him.  He called it “Father Marquette 1866 Rye,”  the date being a possible reference to the year when he first established his liquor business.  Like many other Cincinnati liquor wholesalers,  Gluck issued gift items to favored customers.  Among his were two varieties of mini-jug,  each holding a swallow or two of Father Marquette whiskey.  He also gave away shot glasses bearing the etched visage of Marquette and a corkscrew bearing the priest’s name.  For saloons featuring Gluck brands he

provided back of the bar bottles, such as the one that advertised his Westminster Rye brand.  Note the elaborate stopper and the gold lettering.   Such items were expensive but seen as an important way to impress the faces along the bar to purchase Gluck’s whiskey.

As his business was prospering in Cincinnati,  Gluck was comfortably residing  in Ward 2 of Cincinnati where the U.S.  Census found him in 1910 at age 63, living with Celia and one servant.  His occupation was given as “Manufacturer - Whiskey.”   His son George had left home and married a woman named Helen Epstein several years earlier.  From this union Gluck could claim a three-year-old granddaughter.  He also had taken George into the business.  The same census shows his son as a liquor salesman and treasurer of the firm. 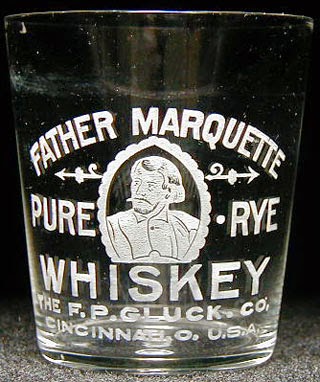 Similar to his experience in Minneapolis,  Gluck found it difficult to keep out of legal troubles in Ohio.  The Cincinnati Enquirer of June 7, 1911,  reported that a judgment had been issued against his firm after a compliant was received from another whiskey firm that Gluck had poached its brand names.  He was “perpetually enjoined” by the court from infringing on the plaintiff’s brands and trademarks.  Upon a report by the U.S. Secretary of Agriculture, filed in the U.S. District Court for Southern Ohio, the company was hauled into court again in 1914, accused of adulterating

and misbranding a quantity of apple brandy sent to Montana,  a violation of the Food and Drugs Act.   The indictment stated:  “...A mixture of apple brandy and neutral spirits had been substituted wholly or in part for a type of apple brandy which the article purported to be.”   When tested the product was shown to be largely neutral spirits.  What may particularly have offended Federal Authorities was a statement on the label of the brandy that stated:  “This article is guaranteed under the National Pure Food Law not to be adulterated or misbranded.”   The F. P. Gluck Company quickly pleaded guilty and paid a fine of $15 and court costs.

By this time F. P. Gluck may have died or otherwise had exited his management role.   Only a year after this incident,  the Wine & Spirits Journal told its readers:  “An important deal by which two well-known local whiskey houses will combine their business was announced yesterday.”   The Gluck Company was being absorbed by the Gill-Herman Company, another Cincinnati whiskey house.  It had been incorporated in 1903 with capital of $50,000.   Gill-Herman took over the company accounts and brands.  Gluck’s rectifying plant was shut down and business conducted entirely from the Gill-Herman offices.  George Gluck was hired as a sales manager and five Gluck Company salesmen were retained bringing the total Gill-Herman sales force to twenty.

The Gill-Herman outfit was forced to close down when Ohio went dry in 1916.  George Gluck lost his job. The 1920 census found him still living in Cincinnati with his wife and daughter.  His occupation was given as “Salesman-Beverage.”   The beverage he was selling clearly was not Father Marquette Rye.  The explorer who helped open up much of the North America continent and so evidently inspired F. P. Gluck has continued to be remembered for his explorations down to this his 375th anniversary but the Jesuit priest no longer is memorialized by whiskey.

Posted by Jack Sullivan at 7:02 AM