“North to Alaska!” with Albert Reinert 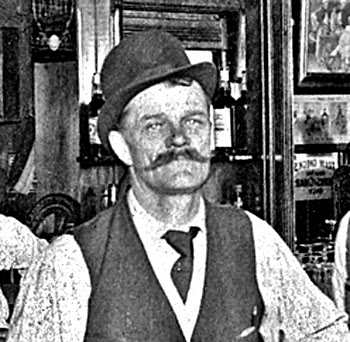 Skagway.  The very name conjures up the early “hurly-burly” days of Alaska as tens of thousands of prospectors headed north seeking their fortunes in the late 1800s.   Albert Reinert knew Skagway well and ran the most successful saloon in town.  So noted was Reinert’s watering hole that today it is the center of a National Park Service site dedicated to the Klondike Gold Rush.

Shown left, Reinert was born in Germany in 1864 and as a youth emigrated to the United States, settling in Seattle, Washington.  He eventually opened a restaurant and became a citizen in 1885.  In 1899 with the hordes heading to the Yukon, many of them through Skagway, described as “one of the roughest places in the world,”  he joined them, not to moil for gold,  but to slake the thirst of the miners.   He found a partner in Charles Sacke, a former Seattle brewer and owner of the  Skagway City Brewery.   They made an opportunity out of a new law requiring Skagway saloons to obtain a $1,500 license (equivalent to $35,000 today) in order to stay in business.  Of the 80 saloons operating in town, only a dozen managed to stay open. 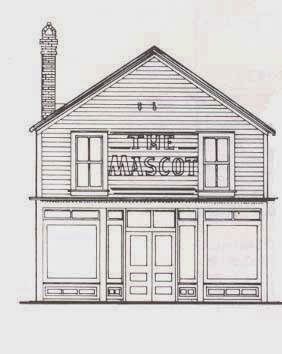 Reinert and Sacke could afford the license fee and bought the newly defunct “Mascotte” Saloon, which had been constructed the previous year at the southeast corner of Broadway and Third Avenue.  In addition to purchasing the building and fixtures, they remodel the interior.  The first floor became all saloon and more tables were added.  A cigar stand and a “club room,” (i.e. gambling den) were added and Reinert moved into an upstairs apartment.  Now called simply “The Mascot,” the saloon facade is shown here in an illustration.

The Mascot proved to be very lucrative for the partners.  A railroad known as the White Pass and Yukon Railroad Road had begun construction during the Klondike Gold Rush.  It linked Skagway with Whitehorse, the Canadian capital of the Yukon.  A single track isolated system the line had no connection with any other railroad.  Equipment, freight and passengers were ferried by ship to the Port of Skagway and then by train inland to stops along the route.  Shown below is a photo of Skagway with the railway running down middle of the Broadway, the main drag. 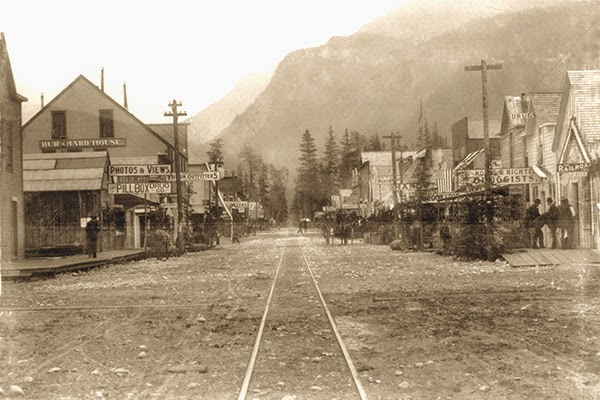 Thousands of prospectors poured through the streets of Skagway, the vast majority men and thirsty. The Mascot was a favored stop.  During the Gold Rush days, weary prospectors could flop their bedrolls down on the floor and sleep there before setting out on the trail.  Albert Reinert proved to be a congenial host.  His free lunches could include clam chowder or spare ribs, German sauerkraut or Mexican enchiladas.  Sacke supplied the Mascot with locally brewed pilsener beer; five cents bought a schooner. During the Gold Rush the drink of choice, however, was whiskey, decanted into glasses or sold by the bottle. Reinert’s bartenders, men like Ham Grease Jimmy and future mayor Chris Shea, were well-known local characters.   Ladies of uncertain virtue also were present on premises.  Although the Mascot was prospering, by 1901 things were not going well between Reinert and Sacke.  They decided to sell the saloon rather than to continue the partnership.  On May 23, 1901, the City Marshall rolled a beer barrel out front and auctioned it off.  The highest bidder was Albert Reinert who plunked $6,025 on the barrel head. 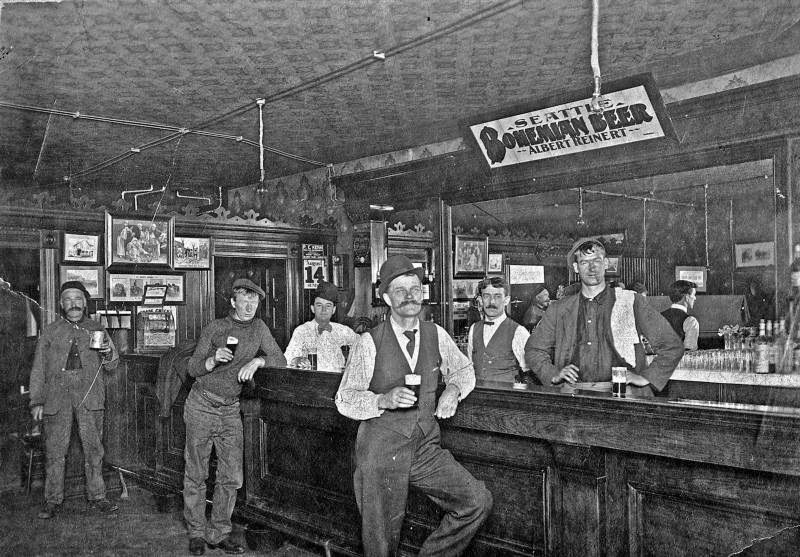 He then began an extensive remodeling and enlarging of the premises.  According to the National Park Service history:  "The east wall was removed and the building was doubled in length. A new plate glass façade went in. Telegraph wires were installed, a possible move to get direct reports on sporting events."  Shown above is a photo of the Mascot when it reopened, sporting the fanciest bar in town. No barstools were provided. Patrons stood to drink and socialize. A bar rail, brass spittoons, and bar

towels were provided for customers use. The proud proprietor, Reinert himself, stood front and center, a foaming beer in his hand.  During the Gold Rush days, weary prospectors could "flop" their bedroll down on the floor and sleep before setting out on the trail.  Not even a flood that struck Skagway in 1902, as shown here, could shut down the Mascot.

As the Gold Rush petered out and prospectors returned home, the saloon’s customer base began to erode.   Perhaps as a counter, in 1903 Reinert brought in a Victor Talking Machine and spun records every night,  advertising it as an “electric  concert.”  He also 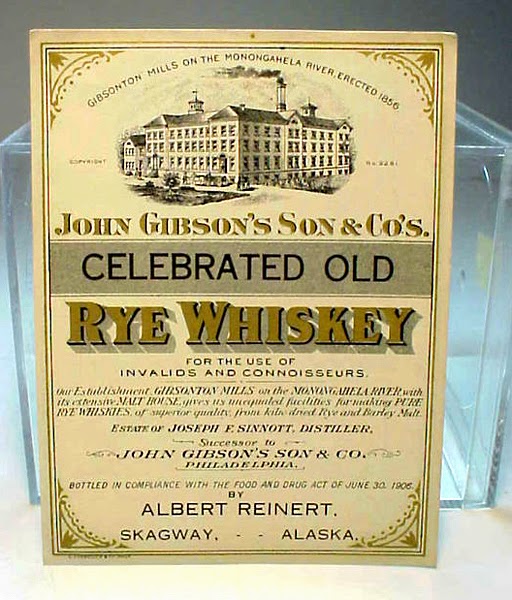 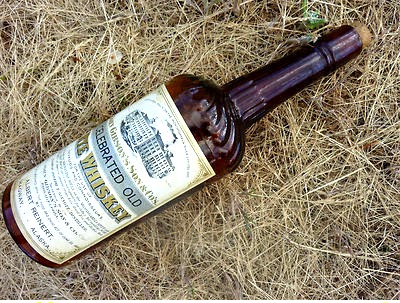 imported a premier Pennsylvania rye whiskey from the John Gibson’s Son & Co., likely bringing it by the barrel from the Continental U.S. and bottling it himself.   The label carried his name in large letters and assured that his bottling was in compliance with the Food and Drug Act of 1906, something of a stretch since the Act did not specifically deal with whiskey.  Like other saloon keepers, he also issued bar tokens to his customers.   The one shown here was good for 12 1/2 cents.  Two would get you a shot of Gibson Rye.

Reinert also was branching out.  The Idaho Saloon, also known as the Idaho Liquor House, was located catty-corner from the Mascot, at the northwest corner of Broadway and Third Avenue. Its owners had a falling out and sold.  Reinert bought it in 1906 and changed the name to the Horseshoe Saloon.  He ran it in conjunction with the Mascot for several years and eventually closed it down.

Located on "Steamboat Row" (named for the numerous steamship companies' offices in the area), the Mascot continued to be popular. When the Gold Rush ebbed and the disappointed miners went home, however, Skagway’s economy suffered.  By sifting through the bottles, bones, and other debris on the Mascot site, archeologists have been able to determine that  as money grew tighter,  more beer and less whiskey was drunk and the quality of the free lunch declined.  Moreover, serving liquor to longshoremen and other hardened Alaskans could spell trouble for Reinert.  Fighting, pulling pistols, or throwing stones through the plate glass windows were some of the incidents reported from his saloon in the local press.  By that time the Mascot was a “men only” establishment, Alaska law having banned women from socializing at bars.

Moreover, anti-alcohol sentiments were growing ever stronger in the Alaska Territory.  In 1903 saloons were forced to close on Sunday.   Perhaps as a means of staving off the “Drys” or suspicions about his loyalties, the German-born Reinert announced during World War One that he would donate 10% of his profits to the Red Cross.  It made no difference to the prohibitionists.  In 1916 Skagway banned all alcohol sales except for medicinal use. A Skagway marshal went from saloon to saloon, shutting them down.  Although the Mascot was not spared, it has been accounted the only Skagway drinking establishment to survive under one ownership from the Gold Rush to 1916.
.
After the ban on alcohol,  Reinert first rented the building and then sold it in 1918 as premises for a 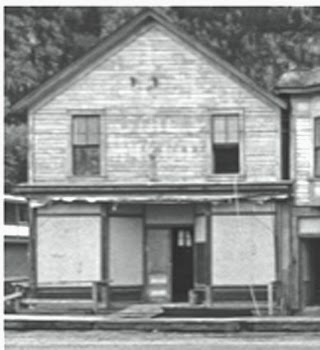 druggist.  Meanwhile he was having a personal life.  While in his forties,  he married a woman named Agnes who had been born in 1887 in Canada to Irish immigrant parents.   She had been brought to Alaska as a child of five and when they married she was 23 years younger than Albert.  The 1920 U.S. Census found them living in Skagway with no children.   Reinert’s occupation was given as “merchant.” 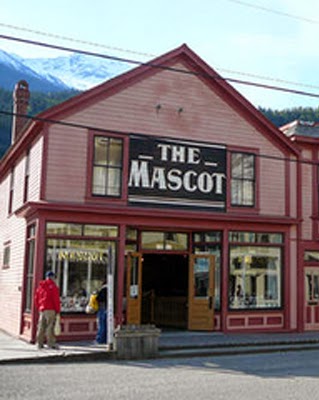 After years serving numerous uses, the Mascot Saloon, shown right as it looked before restoration, came into the possession of the Nation Park Service as the centerpiece of the Klondike Gold Rush National Park.  The saloon and adjacent structures were restored to their 1905-1916 appearance in 1990 at a cost of $1.2 million.   Today the building serves as a museum with exhibits depicting life in Skagway during the Gold Rush, including a reconstruction of the Mascot bar complete with mannequin customers.  As a result, Albert Reinert, the German immigrant who went “North to Alaska,” and found gold in selling liquor, continues to be well remembered in Skagway. 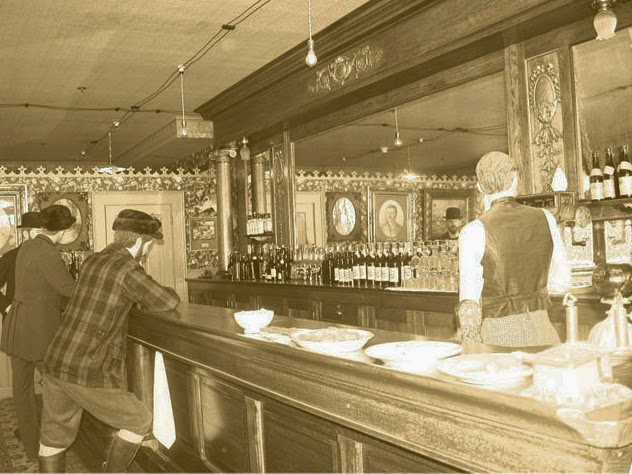 Note:  Much of the information in this post comes from National Park Service documents related to the Klondike Gold Rush National Park in Skagway.