Henry Luyties: Under the Bridge and Before the Flood 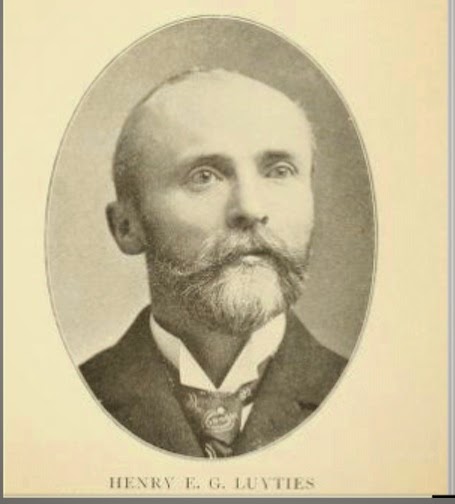 In the late 19th Century Henry E. G. Luyties was credited with processing one-tenth of the liquor output of the country from the Luyties Bros. Company located in the shadow of the Brooklyn Bridge in Manhattan.  Henry’s efforts in several directions brought him and a brand of whiskey he called “Antediluvian” considerable recognition in “The Big Apple” and throughout the United States.

Shown here in maturity, Henry Luyties was born in Germany in November 1847.  Sometime in the mid-1660s, while still a teenager, likely with other family members, he emigrated to the United States.  Later he would testify that he had been involved in alcoholic beverages since 1866.   His first exposure would seem to be with California wines because from early on he had ties with West Coast vintners.  The 1880 U.S. Census found him, age 32, living in New York City, his occupation given as “wine importer.”  he was married to Amalie, a woman nine years his junior and they had two children,  Clara, 3, and Otto, 1.   Also in the household was Henry’s younger sister, also Clara, and his older brother, Gerhard, whose occupation also was “wine importer.” 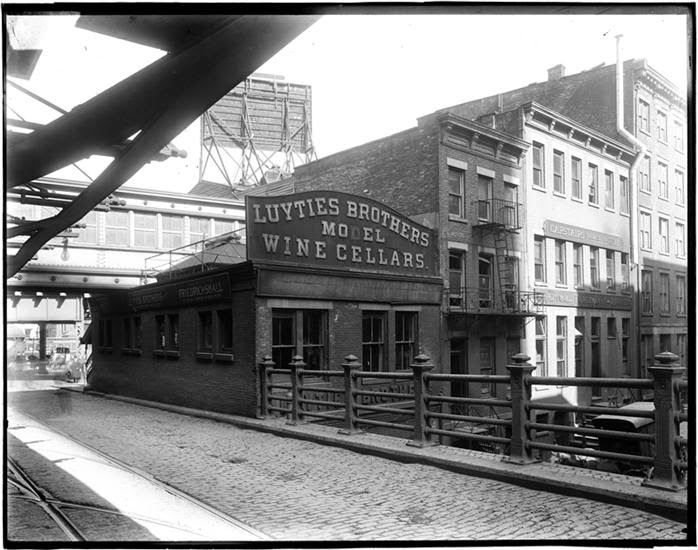 The building of the Brooklyn Bridge, spanning the East River, was underway.  Shown above as it looks today, it was the first steel wire suspension bridge constructed and long considered one of the wonders of the New World.  About the same time Henry and Gerhard had formed Luyties Brothers Co.   The brothers Luyties advertised extensively that their “Model Wine Cellars,” shown here, were nestled in the shadow of the bridge on Manhattan Island.  The address was 204 William Street. 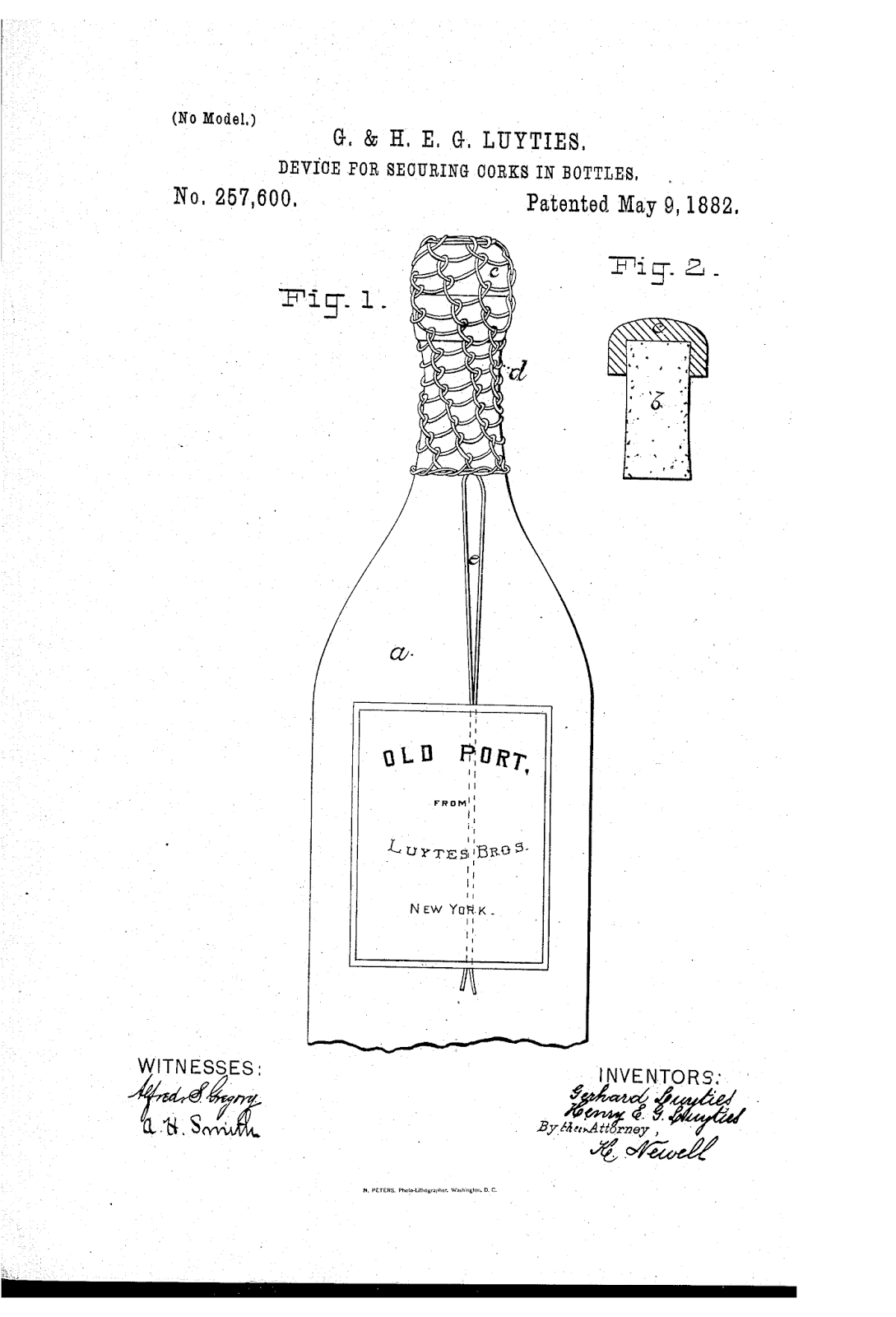 Although Henry was the principal partner in the enterprise, Gerhard may have been the inventive brother.  In 1882, the Luyties, with Gerhard listed first, patented three different devices for closures of wine bottles.  The patent illustration shown here is the most elaborate of the three and was designed to insure that the cork “…cannot be removed without detection.”  Note that the invention is displayed on a bottle of Luyties Bros. Old Port.  The other Luyties patented stoppers involved compressing corks with wooden tops securely within the neck of specially blown glass bottles. 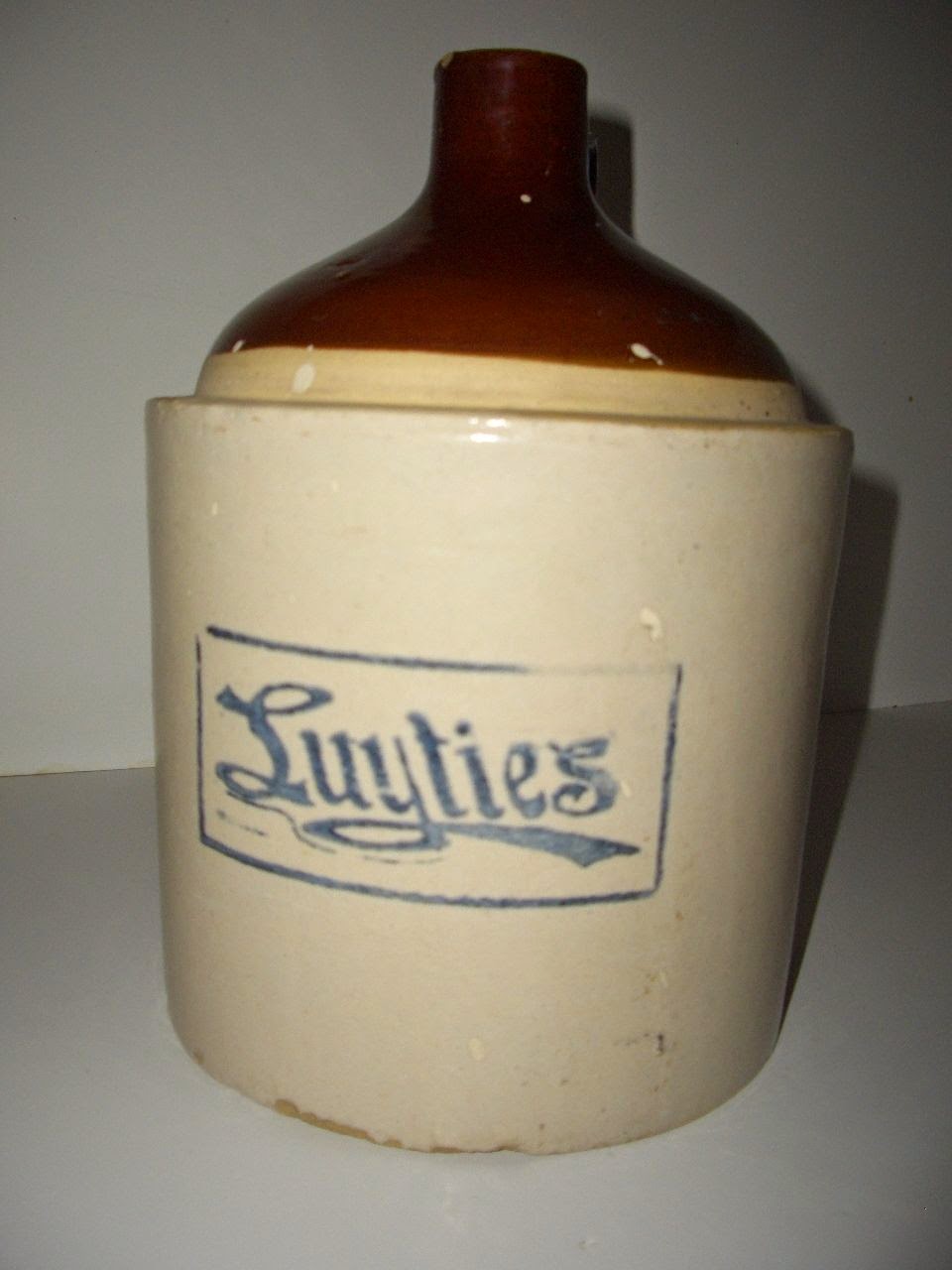 From their beginning in wines, the Luyties soon branched out into the liquor trade, both wholesale and retail.  Their whiskey sold to saloon was packaged in large stoneware jugs with their name in cobalt scrip across the front.   For the retail trade the brothers seemed to have a single flagship brand with the highly unusual name of “Antediluvian,” a word means “before the flood,” referring to the Biblical deluge.  The company advertised the label showing a bottle washing along in the foamy deep;  Mount Ararat, where Noah is said to have landed his ark, was shown in the distance.  Antediluvian Whiskey also came in a unusual bottle.  It was a dark amber with the name and “Luyties Bros.” etched — not embossed — on the surface.  Some bottles also included “New York.” 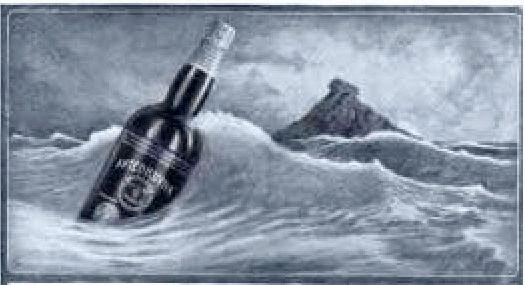 In time Luyties Brothers became one of the largest “rectifiers” of raw whiskey, blending, compounding, and distributing liquor to bottlers all across the East and Midwest.  For several years in the mid-1890s, the firm maintained sales offices in Chicago at 97 North Clark St.  According to information presented to the New York Industrial Commission, by the late 1890s Luyties Brothers was providing about ten percent of the rectified whiskey in the U.S.  Little wonder then that the Commission called Henry Luyties as a key witness in its 1889 investigative hearings on the infamous “Whiskey Trust.”

Luyties was a friendly witness in that he confirmed that the Trust, known formally as the Distilling and Cattle Feeding Company, held a strong hand in the industry:  “Every large dealer uses a considerable quantity of spirits, and the consumption is important and very great just now.  it is the most important article in the trade, being really the cornerstone of the whole business.”  He acknowledged that the Trust “makes a special effort to retain the trade or else drive us out of the business.  I do not know that it has any other objective.” 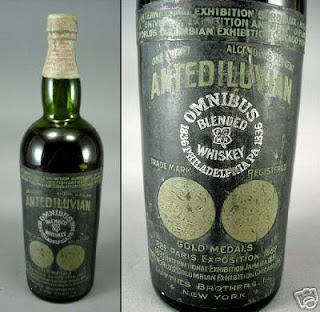 On the other hand, Luyties endorsed the notion of trusts in the whiskey industry.  “There is no business in which the existence of a combination, or trust, as you call it, has become more beneficial and has become more of a matter of necessity than in this line,” he said, arguing that heavy federal and state taxes on liquor had created the need.
The problem with the Distillers & Cattle Feeding organization, he added, was the greed and mismanagement of those running it.

That same year, 1889, Gerhard Luyties returned to live in Germany.  Although Henry did not immediately change the company name and Gerhard continued to be listed as a director, Henry found, as one observer put it, the management task “became too burdensome for one man, no matter how energetic.”  In addition, Henry had purchased the Federal Distilling Company, a gin manufacturer, and had become a director of the Germania Bank in New York.  In November 1904 he effected a merger with wine and spirits business owned by Gustav Amsinck and operated by William Kessler.  The merged business was named Luyties Bros. & Kessler, with Henry and Kessler sharing the management burdens.  A trade publication commented: “…We can well compare the solidity of Luyties Bros. & Kessler with the foundations of the Brooklyn Bridge, under which their unique establishment, now perfected in every detail, is carried on.” 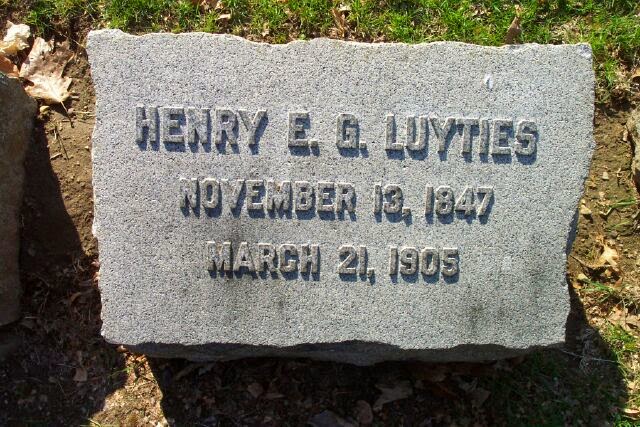 Henry survived the merger only one year, however, dying at the age of 58 in March of 1905. Stricken with pneumonia, he passed away at his home at 987 Madison Avenue and was buried in Woodlawn Cemetery in the Bronx, New York.  His wife Amalie joined him there 23 years later in 1928.  The business he had co-founded continued on for years after his death.  Shown here is an 1910 ad from the firm. 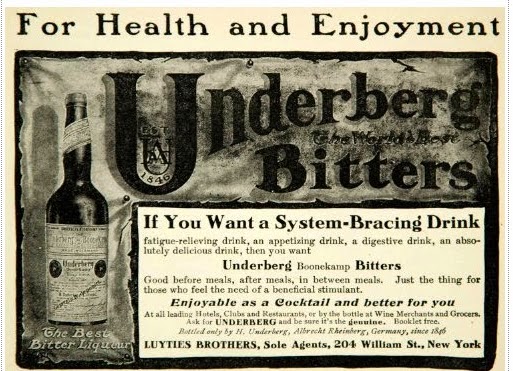 In a reasonably short lifetime this German immigrant had fashioned a flourishing nationally recognized business encompassing both wine and liquor. It was fitting that Henry E. G. Luyties would be among those honored with his photograph included in the book “Notable New Yorkers of 1896-1899 — the portrait that opened this post.