Preserving the Memory of the KC Whiskey Riegers 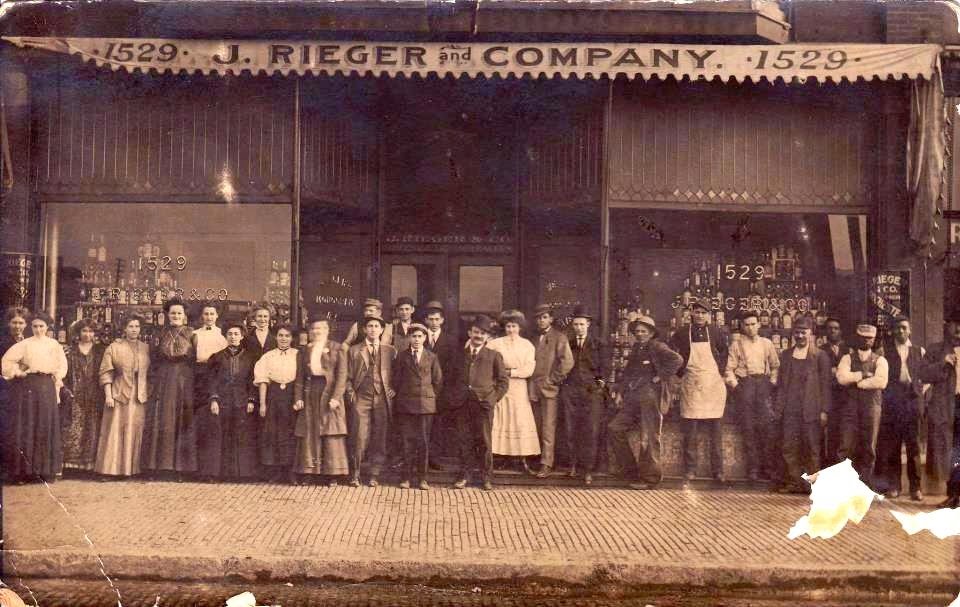 One of the prime objectives of this blog is to recount the histories and pay tribute to the many remarkable men, and a few women, who were an integral part of the alcoholic drink industry in America before the onset of National Prohibition.  In Kansas City, Missouri, some dedicated folks have gone way beyond my efforts to keep fresh the memory of Jacob and Alexander Rieger, whiskey men of considerable accomplishments.

The Rieger story began 1827 in what was known then as the Austro-Hungarian Empire.  Jacob was the son of Isaac Rieger, with his birthplace given variously as Austria,  Hungary, and Czechoslovakia.  He married in his homeland, a woman named Mary, last name possibly Rizor.  The couple had two children, Sallie, born 1866, and Alexander, born 1870.

The family immigrated to the United States in 1876, settling in Kansas City where there was a substantial German population. By this time Jacob was 52,  somewhat old for pulling up stakes in his homeland and starting over in America.  My suspicion is that he had been involved in the liquor trade in Europe and brought that experience with him to our shores.  He seems rapidly to have established himself, reportedly opening a liquor store in Kansas City’s West Bottoms neighborhood just months after arriving.  His location put him on what was known locally as “The Wettest Block in the World.”  Across from the famous Kansas City stockyards, the neighborhood was an easy jaunt for folks from Kansas City, Kansas, to reach after that state went completely dry in 1881.  In the West Bottoms they could drink freely, dance, gamble and party, party, party.  Rieger was among the beneficiaries.

The photo that opens this vignette shows Rieger’s extensive wholesale and retail liquor store as it looked around 1900.  Standing front and center of his 1529 Genesee address was Jacob himself.  Wearing a homberg hat, he assumed a jaunty stance, hands in pockets.  His numerous staff, one that included both women and blacks, were arrayed around him. 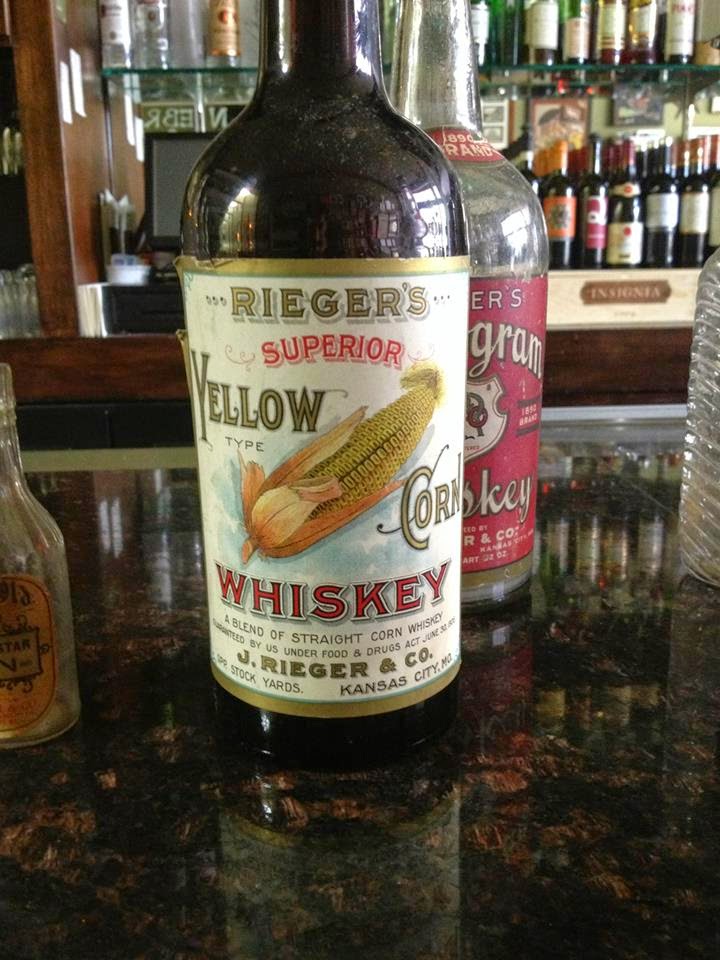 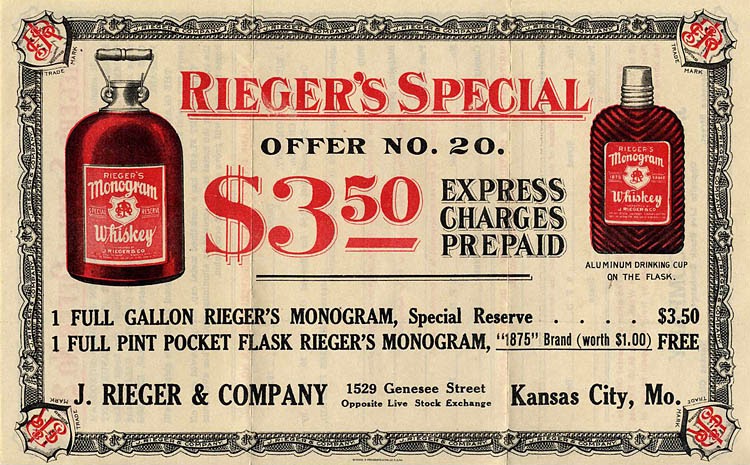 The firm advertised widely across the country,  billing itself as “Largest Wholesale Whiskey House in the United States.”  Its flagship brand was Rieger’s Monogram Whiskey.  A full gallon could be had for $3.50 and Rieger would throw in a pint flask of the same whiskey for free and pre-pay the express charges.   A colorful Christmas ad advertised Rieger’s Monogram as “the World’ Finest Liquor.”  Because many of the states went of Missouri had gone “dry” to one extent or another — and mail order whiskey into those areas was still legal — the firm did a booming business in the West. 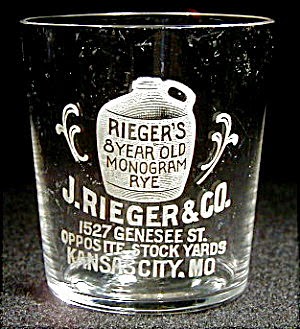 Competition from other KC outfits was stiff, however, particularly for business in the city itself.  Rieger responded with a number of distinctive shot glasses that would have been provided to saloon owners and bartenders.   Another distinctive gift item was a coin purse, also aimed at the men behind the bar who often were called upon for change.

By the dawn of the 20th Century, Jacob Rieger was well into his 70s.  He is shown here in what is said to be the only known photo of him in his later years.  Always provident, he had brought his son, Alexander, with him into the liquor business as the boy had matured.  By 1914 Alexander was advertising that he was “sole owner” of the liquor firm, Jacob having retired from its management.  The following year,  age 88, Jacob died and was buried next to his wife, Mary, at the Rieger plot in Elwood Cemetery in Kansas City.  His grave is marked with the date and “Father.” 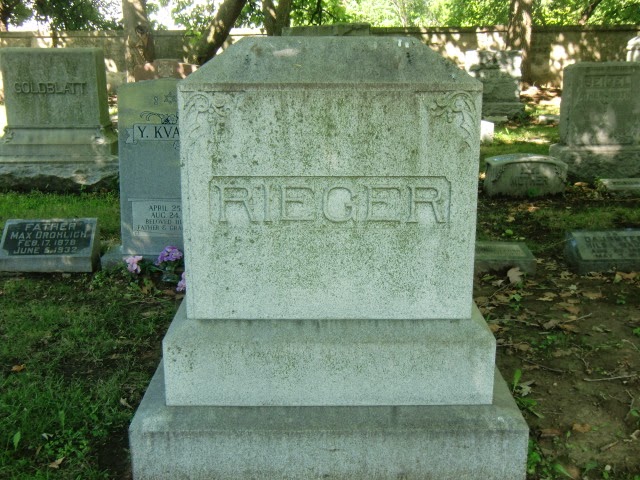 Alexander Rieger, shown here, proved to be every bit the businessman his father was.  While continuing the liquor business Jacob had founded, he branched out in new directions.  In 1915 he opened the Rieger Hotel that is said to have become the home away from home for many traveling salesmen, railroad workers and other transients in Kansas City.  The three story building shown here had a long, rich history and much of the decor, including a fancy tile floor and ornate bathroom fixtures were much admired.  The lobby included a front desk and a lounge restaurant.

The son also moved into banking, becoming the chairman of the Mercantile Bank, was on the the boards of several philanthropic organizations, and served as Honorary Consul for Czechoslovakia in Kansas City.  Because Alexander seems to have escaped the census for most of his years, information on his personal life is sketchy.  He is said to have been married three times. He had two sons, Nathan and Jack, who followed him  into the banking business.  In the 1930 census, living in the Rieger Hotel, he was listed as a widower.  He subsequently was married a third time to a Mrs. Cora Peiser, and the couple lived in the glamorous Sombart Apartments at 420 Armour Boulevard. 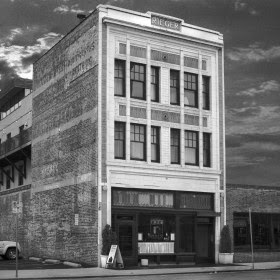 Alexander Rieger died in 1936 at the age of 59.  He had long since shut the doors of the J. Rieger liquor business because of the onset of National Prohibition.  The memory of the Riegers as whiskey men might have faded as badly as the sign shown below.  It is still slightly visible on the side of the Rieger Hotel, an ad featuring a 20 foot tall bottle and the brand name, O-So-Good.

In recent years, however, several Kansas City residents have worked to preserve the memory of the Riegers.  One of them is Ryan Maybee, who has restored the almost century old hotel and calls it the Rieger Hotel Grill and Exchange.  The website for the establishment gives a brief history of the family.  In his efforts Maybee has been assisted by others, principal among them Paul Gronquist, a Topeka resident who is a noted collector of pre-Prohibition artifacts.  He has a sizable assemblage of Rieger items and has given some to the refurbished hotel and restaurant for display.  Through these strong efforts the notable Riegers live on in Kansas City. 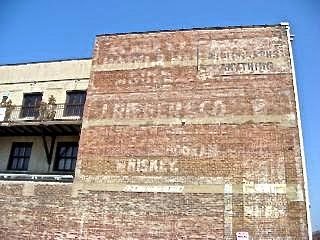 Note:   Some of the information and illustrations for this post are from the website of the Rieger Hotel Grill and Exchange.  The bottles shown are from the Paul Gronquist collection.