For the Holtzermanns of Piqua, Bitters Were Mighty Sweet 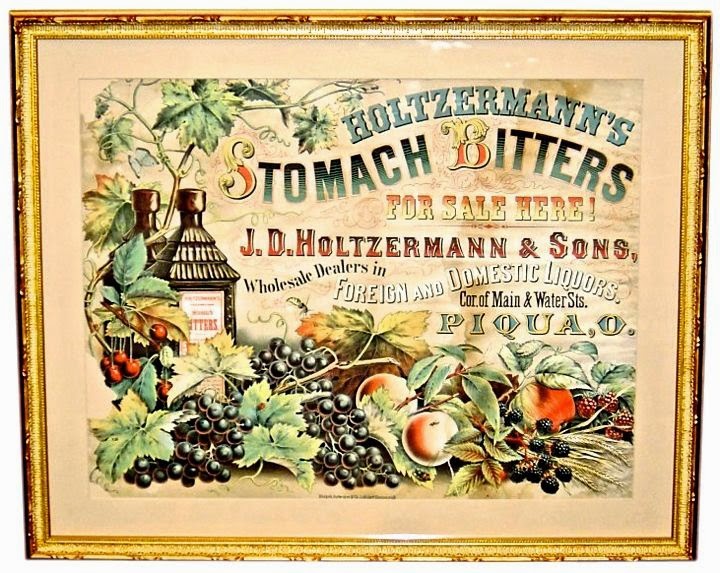 That a major national alcoholic drink originated in tiny Piqua, Ohio, was in itself unusual.  Unusual too were the circumstances surrounding the Holtzermanns who made Piqua their home and, along with whiskey, produced the stomach bitters that made the family a fortune.

The central figure among this clan was Christoph August Holtzermann known by friends and family as August.  He was born in 1840 a Piquod — as residents of Piqua are referred to — from a German family with strong ties into the Prussian military.  His father was Jacob Daniel (J.D.) Holtzermann who had emigrated from Germany in the early 1800s and settled in this southwest Ohio town.  His mother was Johanna L. Dettmer. 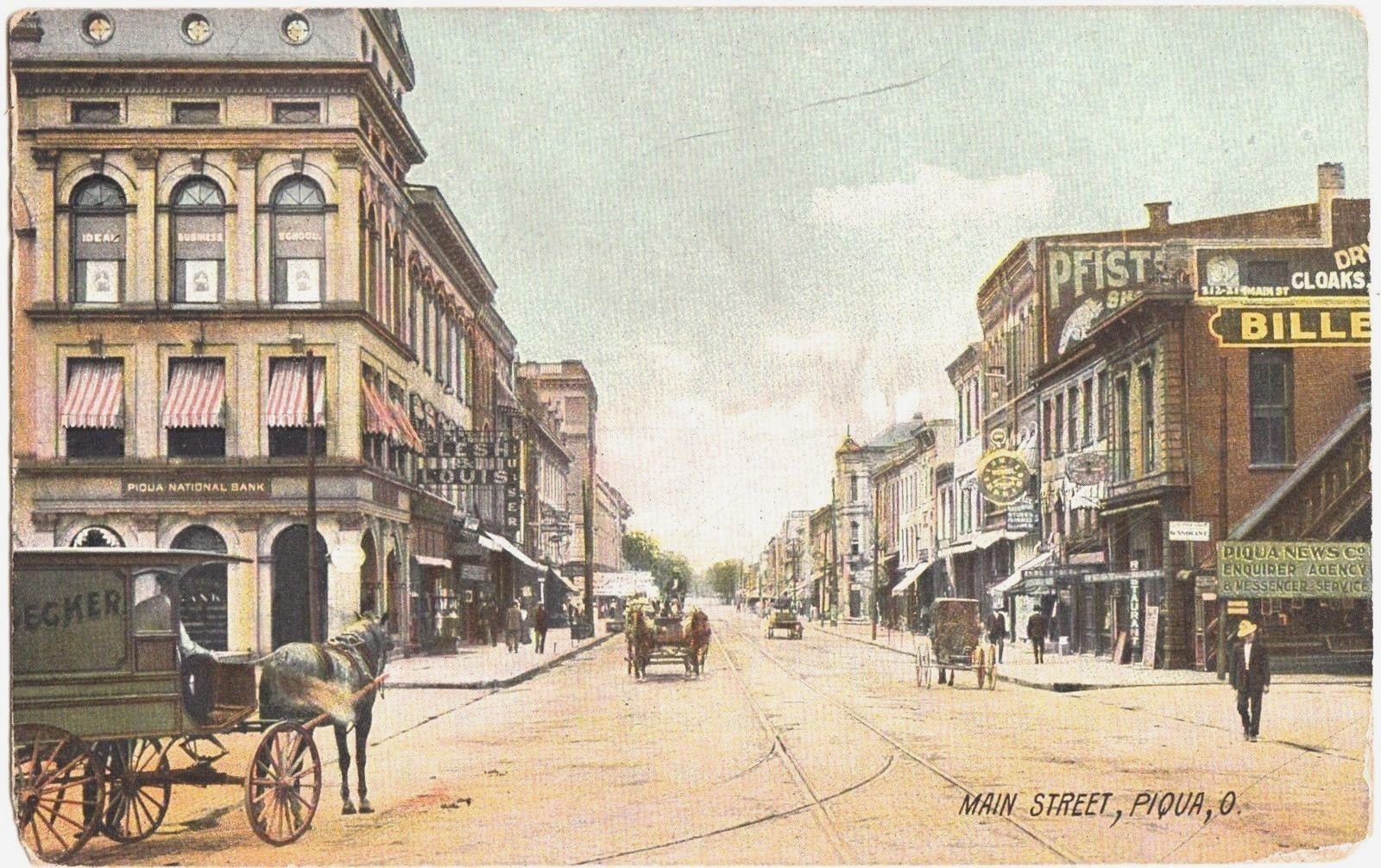 Jacob’s reasons for selecting this location to settle down are unclear.  Piqua originally was a small crossroads hamlet with a combination of log frame houses, ma-and-pa shops, taverns, and small-scale industries.  The completion of the Miami & Erie Canal in 1837 allowed the shipment of goods more easily in and out of town and gave an initial economic boost.   The coming of the Columbus, Piqua and Indiana Railroad in 1856 again led to some increased commercial activity and the bustling downtown shown above.

Both the 1850 and 1860 U.S. Census show Christoph Holtzermann living at home with his parents.  By 1863, however, he had taken a wife.  She was Elise Schletter, born in Germany, and the daughter of Friedrich Ludwig Schletter and Tibetha Gertrude Holtzermann.  Elise was his second cousin and possibly brought to America to marry him.  By the 1870 census, Christoph had established his own full household of Piquods.  Living with the Holtzermanns were their four children, Johanna, George, Louis and Jacob.  Also residing with them were Elise’s mother and her sisters Tibetha and Caroline.  Two domestics served the family.

Holtzermann could well afford to sustain this many people.  His net worth according to the census was equivalent to $250,000 today.   In the early 1860s he had opened a small store at the corner of Main and Water Streets, shown above, advertising himself as a liquor merchant and druggist.  He named the company “J.D. Holtzermann & Sons.” The business was successful but unspectacular until 1867 when Christoph patented his formula for bitters.  He said the beverage was composed of sugar, orange peel, orange apple, oms root, galanga root, gentian root, calamus root, wormwood, ginger, cardamon seed, cassia, mace, nutmeg, clover and coriander seed.  Perhaps the most important ingredient, however, was pure alcoholic spirits. He called it “Holtzermann’s Stomach Bitters.”

Holtermann, working under the name of his father, was awarded a patent for this concoction in May 1867.  In his application he had claimed that:  “The nature of my invention consists in so compounding certain ingredients…as to produce a healthful, pleasant stomach bitters for dyspepsia, weakness of the stomach and bowels, and general debility.” 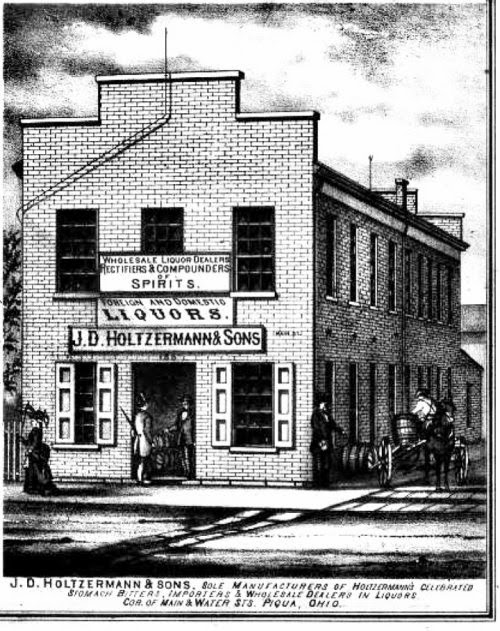 An illustration exists of the J.D. Holtzermann & Sons emporium, emphasizing it as “sole manufacturer of Holzermann’s celebrated stomach bitters, importers & wholesale dealers in liquor.”  Within its two stories, the company was rectifying and compounding a variety of spirits.  Increasingly whiskey men like Christoph were moving to bitters as their flagship brands.  They were trying to avoid paying extra taxes from Civil War imposed levies in whiskey by terming their products “bitters” and thus medicine rather than liquor.

Christoph advertised: “Holtzermann's Stomach Bitters For Sale Here! August Holtzermann Wholesale Dealer in Foreign and Domestic Liquors. Located on the Corner Of Main & Water Streets. Piqua, Ohio the large liquor house on the corner of Main and Water Streets, where are also manufactured the celebrated Holtzermann's Patent Stomach Bitters, which are very extensively sold through Western Ohio, Indiana and Illinois.” 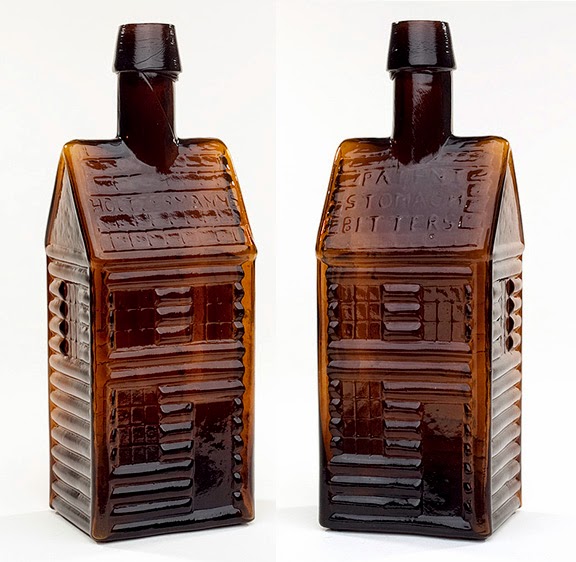 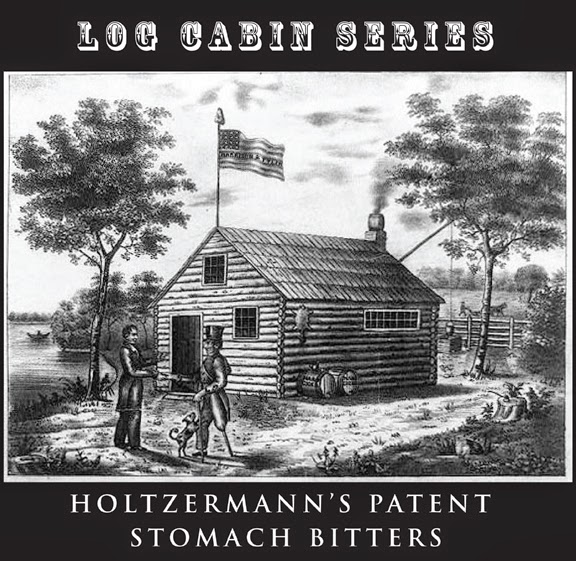 Holtzermann initiated vigorous merchandising, initially with a log cabin theme appropriate to the earlier rustic town Piqua had been.  The theme was carried over to the bitters bottles fashioned to look like two story log structures with embossing of the name on the roof panels.  As shown here, these bottles came in various shades of amber.  Today they are are hotly collected. 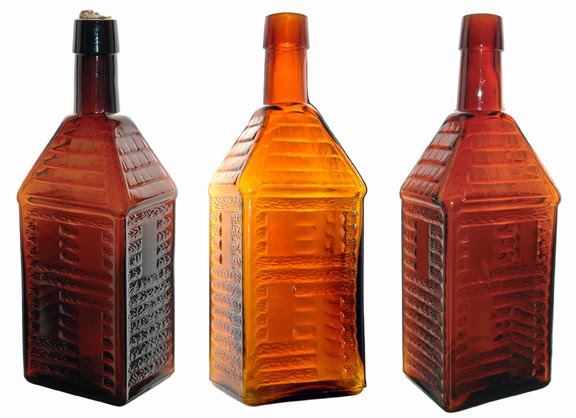 Christoph unfortunately had little time to enjoy his soaring fortunes.  In June 1875 he fell ill and never recovered, dying on July 6 of that year, only 34 years of age.  He was buried in Forest Hill Cemetery, Piqua.   His untimely death must have sent his business affairs into some chaos.  His eldest son, Louis, was still only nine years old and the second son, Jacob Daniel, was only six.  My assumption is that other family members guided the fortunes of the Holtzermann bitters empire until the boys reached maturity.  We know that both were required to work in the whiskey trade at an early age.  At the same time they were able to attend school and Louis is credited with receiving some “higher education” in Piqua.  Both apparently showed business abilities while still in their teens. 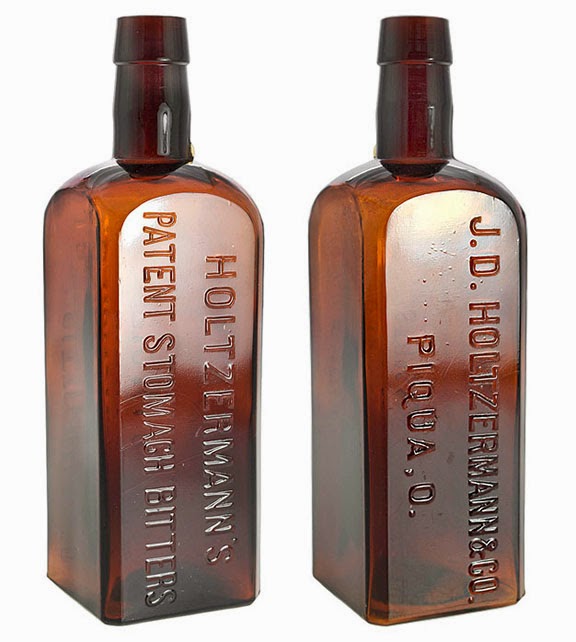 As the sons took over business operations the shape of the Holtzermann’s Patent Stomach Bitters changed.  The log cabin bottle, while distinctive, likely was relatively expensive to produce.  About 1885, a new container was issued, one more like the other bitter bottles of the day.  Shown here, it was square with four panels,  embossed “Holtzermanns/ Stomach/ Bitters” on one panel and then on the opposite panel “J. D. Holtzermann & Co./ Piqua O.”  Even that bottle is said to be rare.

In 1887 when Louis was still just 23 and Jacob only 18, they apparently decided that Piqua was too small a place for their business ambitions and made a move to Minneapolis, Minnesota, where they opened a large department store on Cedar Avenue.  Among the goods featured there were the stomach bitters that had made them wealthy men at an early age.  The 1900 census found Louis, still a bachelor at 36, as the head of his own extended family.  Jacob, now 31 and unmarried, was living with him along with their mother, Elise, and a sister, Johanna, together with her husband and a baby girl.  One hired girl served the family. 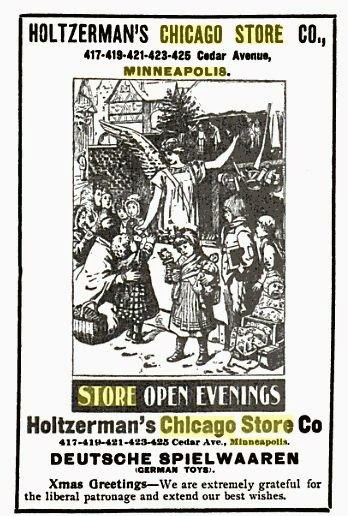 A contemporary biography noted the quick success in Minneapolis of the “Holtzermann’ Chicago Store Company.”  “The firm has built up a large and flourishing business and have won respect and appreciation in the business world and in the community at large.”   Jacob Holtzermann would become a director of the South Side State Bank of Minneapolis, a director of the local Humane Society,  and a member of the Minneapolis Board of Corrections and Charities.  When a “blue-ribbon”  civic commission was created in Minneapolis in 1910 to advise on future city development, Jacob was one of 10 citizen leaders chosen.  The Holtzermann family was recorded as active with the local Evangelical Lutheran Church.

At some point, perhaps finding it difficult to keep businesses going in cities hundreds of miles apart, the Holtzermann brothers sold the rights to the Christoph’s formula and the bitters brand name to Ahrendt & Sons Company of Toledo, Ohio, a liquor dealership established about 1890.  Shown here is a Ahrendt-labeled “fifth” bottle of Holtzermann’s Patented Stomach Bitters.  Note the attempt to approximate the original log cabin bottle shape.  When Ahrendt went out of business in 1915 presumably the Holtzermann brand went with it.  Signaling Christoph’s success, the bitters he had invented had been on the American market for 75 years.

Note:  Two lengthy treatments of Holtzermann bitters with illustrations have preceded this one, one by Steve Sewell, the other by Ferdinand Meyer on his Peachridge site.  Both concentrated on the Holtzermann bottles.  While borrowing information and pictures from both, my purpose was to provide as much of the human side of this family as possible.  The post also has allowed me to remember Piqua, a town I visited from time to time as a newspaper reporter from nearby Springfield, Ohio.