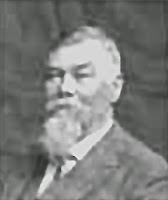 Many whiskey men have used animals as the symbols of their spirits, everything from dogs and bears to ducks and eagles.   Boston’s John S. Doane, shown right, was fixated on the moose for his liquor, employing two bull moose on virtually every advertisement and label of every bottle he sold.  In effect, he issued his personal “moose call” and the customers came running.

By the time John Doane was born in 1842, however, the last moose had been extirpated from Massachusetts more than a century earlier, the victim of hunting and habitat loss.  Doane’s birth place was Wellfleet, Mass., a town about half way down Cape Cod.  It had its beginnings because of whaling, fishing, and rich oyster beds.  As a boy John would have seen the ships come and go from Wellfleet’s harbor.  With the decline of whaling all the schooners had departed by 1900.

Doane came from an old New England family, his ancestors having arrived during colonial times from England.  His father was Hezekiah Doane, son of Henry and Abigail Holbrook Doane.  His mother was Catherine Jenkins Smith, the daughter of John and Ruth Witherell Smith.  Both of John’s parents had been born in Wellfleet.   He was the eldest of five children, with one brother and three sisters. 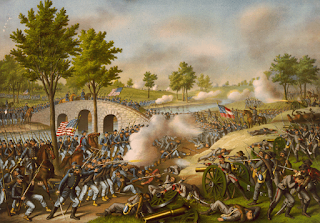 Having reached his maturity in the 1860s, Doane was eligible for Federal service in the Civil War.   History records two Private John Doanes in the Union Army, but an obituary for our man indicates his having joined in 1862.   That would make his unit the Massachusetts Eighth Battery Light Artillery.  It was organized at North Cambridge for six months service in June 1862.   Employed initially in guard duty around Washington, D.C., the regiment saw action at such famous battles as the first Bull Run, South Mountain, and Antietam, the latter shown right, and later was returned to guard functions.  The unit, almost unbelievably, suffered only one enlisted man killed and 10 felled by disease before the regiment finished its short enlistment period in November 1862 and was mustered out.

Although some of Doane’s comrades likely re-enlisted in other newly forming units, no evidence exists that he continued as a fighting man, possibly having seen enough of the carnage to desire to stay out of “harm’s way.”  Nonetheless, after the Civil War he was an active member of the Grand Army of the Republic (GAR), the politically powerful Union veterans organization.

In 1869 he married a Massachusetts-born woman named Sarah.   At the time he was 27 and she was 24.  The 1870 U.S. Census found them living in Ward Two of Boston.  As yet there were no children.  Doane’s occupation was given as proprietor of an “oyster house,” likely a saloon.

Doane next surfaced in Boston as owner of the “John S. Doane Co., Importers, Wholesale Dealers and Jobbers in Foreign and Domestic Wines and Liquors,”  located at 149 & 151 Blackstone Street.  Although Boston business directories first listed the firm several years later, Doane claimed an 1866 founding date for his enterprise.  Almost immediately upon opening his doors he adopted the bull moose as the symbol and brand of his whiskeys and wines. 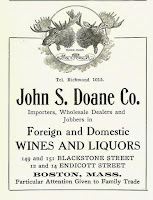 The choice may have signaled his vision about the ultimate size of his business.  Moose are big, the largest mammal in the United States.  A bull moose can weigh anywhere from 600 to 1,000 pounds.  They stand up to six feet at the shoulder.  Moose antlers are also spectacular, spreading at times six feet from end to end. Although the animal was gone from Massachusetts   Doane clearly was thinking big when he chose two bull moose as his calling card.  It was his version of a “moose call.”

In addition to the activities listed on his letterhead, Doane was a “rectifier,” that is, he was buying whiskeys from a variety of distillers, then blending and compounding them to achieve taste and smoothness.   He then was merchandising them with his own labels — virtually all of them bearing the images of moose.  His brands included "Doane's X X X X,” "Doanes 149,” "Fairy Grotto Rye,” "Long Life Malt,” "Old Dimple Rye,” "Old J. S. D.,” and "Sandy Camp Rye."

He sold these whiskeys in large ceramic containers to his wholesale customers, but had a line of retail products ranging from flasks to quarts.  Shown here, his whiskey was sold in clear and amber bottles, apparently not embossed but carrying distinctive paper labels.  A Doane price list indicates that his house brands were low cost liquors, ranging from 75 cents to a dollar a quart.  He also sold a range of more pricey national brands, likely an attempt to foster a mail order customer base. 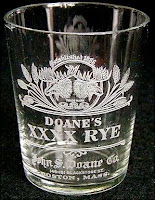 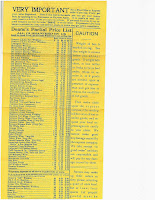 In Boston Doane found himself challenged by stiff competition.  For example, a 1906 city directory listed no fewer than 107 businesses listed as wholesale liquor dealers.  Taking a familiar route to gaining favor with his customers,  he offered shot glasses to saloons and barrooms that carried his liquor.  His glasses were distinctive by the two etched moose.  More unusual was a thermometer giveaway with temperature commentaries including “steam heat,” at 78 degrees, “blood heat,” at 98 and “fever heat” at 110.

At some point Doane, obviously successful in liquor trade, opened a second location at  12-14 Endicott Street in Boston.  The addresses on his labels were appropriately altered to reflect the second outlet.  One is shown left on a Doane wine bottle.  Through all Doane’s years in business, the moose remained linked with the motto:  “Fide et Fiducia.”  Although the Latin meaning of both words varies, my interpretation is “Faithful and Trustworthy.”  My assumption is that this applied to the whiskey as well as to the animals.

The 1900 Federal Census found the John and Sarah Doane boarding on Dudley Street in Boston, likely a residential hostelry known as the Hotel Gladstone.  Doane’s occupation was recorded as “wholesale wine and spirits.”  Five years later, John died and his funeral was held at the Gladstone.  He was buried in Woodlawn Cemetery, shown here, located in Middlesex County, Massachusetts.  With his death and the coming of National Prohibition, his liquor dealership went out of business never to be revived. 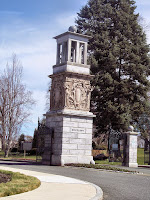 The moose, by contrast, have done well.  The State Division of Wildlife in a recent bulletin announced that the animals have returned to Massachusetts.  Populations have been increasing steadily in New England states as the end of hunting and detrimental forest practices have facilitated higher reproduction and survival rates.  Consequently the moose have reintroduced themselves into northern and central portions of Massachusetts.  Among the places where they frequently have been sighted is Middlesex County.  I fancy that they are there looking for John Doane’s resting place to pay homage to him for the many years he kept their portraits in front of the American drinking public.

Posted by Jack Sullivan at 6:43 AM