Max Mann and Booze Along the Bayou 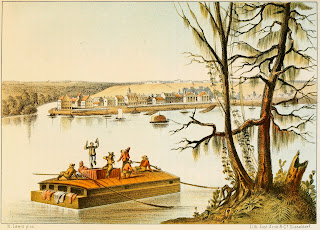 Bayou Sara,  the Mississippi River town shown above, no longer exists.  When it was a bustling Louisiana port in the second half of the 19th Century, however, Max Mann, the son of immigrant Jewish parents, kept the often rowdy residents and visitors well supplied with whiskey and thereby rose to wealth and local prominence.

Mann’s parents likely were among the Jewish emigres from Europe who often were escaping from religious persecution in their own countries and seeking the opportunities offered by America.  Many of them arrived here with little money and began to forge a living as peddlers, bringing needed goods to farm families and isolated communities.   They invested their money wisely and eventually could open stores.   As one writer has put it, these Jewish emigres lent “much needed merchandising and business skills to agrarian societies along the Mississippi River corridor. 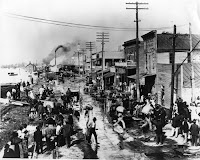 The Manns had selected to settle in a Louisiana river town with a notorious reputation.  According to residents, early in its history ladies did not dare go onto the streets of Bayou Sara, including its main street, shown above, in daytime unescorted — and never after dark.  Saloons abounded, most of them featuring gambling tables.  Drunken brawls were common and since most residents carried pistols killings were not unusual.   It is said that five men were killed in one night in Bayou Sara.

In time things settled down as the town became a busy cotton port with a thriving commercial center and residential areas. It boasted drug stores, sawmills and lumberyards. livestock traders, fish markets, livery stables, grocers, dry goods stores, bakery, post and express offices, icehouses, banks, and clothiers.  Bayou Sara even had a fair grounds and a ball park.   But the focus of much community life was the saloons. 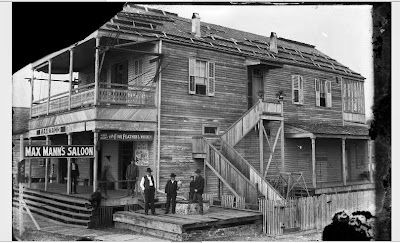 The most popular drink emporium in town belonged to Max Mann.  Shown above, it was two stories tall and backed on the Mississippi River, the front on Bayou Sara’s main drag.  Like other buildings in town, the top story boasted a porch with a fancy wooden balustrade surrounding it. Max’s place was a frequent stop where both steamboat passengers and locals could get a glass of beer or whiskey.  My guess is that Max and his family lived above the saloon. 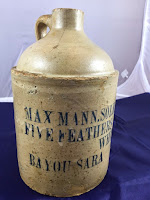 I believe that is Max himself standing next to his establishment in the photo right, balancing a bail type jug on his hand.  Not only was he serving up whiskey over the bar, he was selling it in ceramic containers to the locals.  As advertised on the front of his saloon, the jug probably held “Five Feathers Whiskey.”  This was a brand from Edwin Schiele & Company of St. Louis that Mann was importing from up the Mississippi River, carried in the many river boats plying those waters.  As on a second jug shown here, he claimed to be the sole agent for the label in Bayou Sara and vicinity.  This jug, by the way, recently sold at auction for $1,500.

Five Feathers must have been popular — the saloon shown below during a flood was advertising its “Silver Feathers,” a brand I can find nowhere else and likely named to be competition for Mann’s brand.  Max also was a dealer for “Harper Rye,”  presumably the whiskey that I. W. Bernheim was producing in Louisville, another city with river access for shipping liquor to Bayou Sara.  Mann ran frequent ads for the brand in St. Francisville True Democrat newspaper, emphasizing that Harper Rye had been “scientifically distilled; naturally aged; best and safest for all uses.” 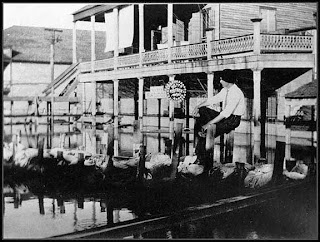 Whatever success Bayou Sara experienced over the years, it could not escape the reality that, as per the picture above, it flooded constantly.  With all its buildings of frame construction, it also suffered from fires.  After one particularly disastrous flood in 1893, Max Mann moved his saloon, lock, stock, barrels and jugs, to Ferdinand Street in St. Francisville, a town located on a high bluff overlooking Bayou Sara.  At this point Max also was wealthy enough to find a place for his family away from his business establishment and built a spacious home nearby on Royal Street.
The U.S. census-taker found the Manns there in 1910.  Max had been married 17 years earlier to a woman named Hettie Schlesinger.   He was 25 when they wed, Hettie was 23.  The couple soon began a family.  When the census taker called there were three children, Theresa, 16; Laurence, 13, and Vivian, 10.  Max’s occupation was given as “proprietor, saloon.”

Mann was not totally tied up in the whiskey trade.  As early as 1896 he was advertising in the local newspapers his availability as an agent for M. Born & Co., billed as “The great Chicago Merchant Tailors,” a firm that made clothes to order.

Also active in civic affairs in Bayou Sara,Max was one of a group of local businessmen who sought a public levy to extend the tracks of the railroad into town by putting a spur track from its then terminus south of town along the levee to the upper end. The railroad brought cotton from local plantations to the river packets docked at Bayou Sara.  The petitioners sought by the tax to raise $1,000 to make the extention possible.  In 1905, Mann was elected as a director of the People’s Bank, a financial institution in St. Francisville, a position he held until the bank was sold in 1913.  He also had a political career, serving a term as an member of the Board of Aldermen for West Feliciana Parish (County).

Things changed drastically for the Manns in 1920.  Even though Louisiana had never voted Prohibition and was counted among the “wettest” states in the Union, with advent of the Volstead Act, Max was forced to shut down his saloon.   The 1930 census found him and wife Hettie living in New Orleans with his married daughter and their grandchild.  Now age 62, he listed no occupation.  Within a year or so, the couple left New Orleans for Woodville, Mississippi, where they made their home in retirement. 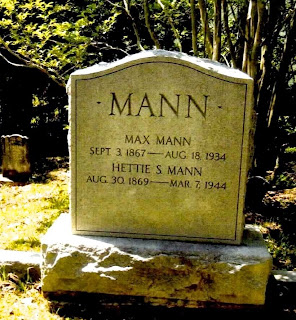 While on a visit to a daughter in Lecompte, Louisiana, in 1934, Mann was stricken suddenly and died,  leaving behind his widow, three grown children, a grandchild and a brother.  He was buried in the Beth Israel Cemetery near Woodville.   Hettie would join him there ten years later.  Their joint headstone is shown here.

An historian of Bayou Sara and St. Francisville has described the benefits that the Jewish settlers brought to Louisiana:  “Accepted as contributing members of their adopted communities along the Mississippi River corridor, these immigrants as they succeeded in business supported public works and served in important civic offices.”  Although Max Mann strictly speaking was not an immigrant but a son of immigrants, his life story speaks to the truth of that observation.

Posted by Jack Sullivan at 5:48 AM