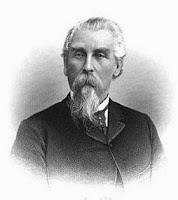 Note:  As in the past, when I come across material about a whiskey man that is as good or better than anything of my authoring, I will reprint it in this blog.   Ron Feldhaus in his 1987 publication, “Bottles, Breweriana and Advertising Jugs” included a lengthy biography of J.C. Oswald.  Feldhaus in turn had gathered information from an 1890 book, “Biographical History of the Northwest” by Alonzo Phelps and an 1893 book, “History of the City of Minneapolis, Minnesota,”  by Isaac Atwater, both of which contained extensive biographies of Oswald. With a few additions signaled by brackets, Ron’s article is reprinted below.
*******

There have been some distinguished men in the history of the Minnesota liquor industry.  Some became known even outside the state, such as A. M. Smith and George Benz.  Others were influential in the growth of Minneapolis, such as Isaac Weil and Jonas F. Brown.  [This blog has posts on each of these whiskey men.]   However there is one man who is virtually unknown to the Minneapolis bottle collector because he seems to have left no embossed or paper labeled bottles or “go-withs” to mark his passing.  Yet this man was in the liquor business for over fifty years.  He was a pioneer of Minneapolis.  He was a State Senator.  He raised race horses of world renown.  And his native wines were known far beyond Minnesota’s borders.  This man [shown above] was John Conrad Oswald. 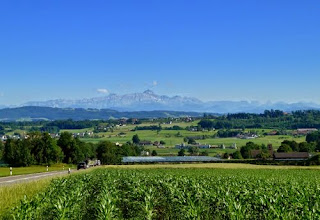 J. C. Oswald was born in the village of Oberaach, Canton Thurgau, Switzerland [shown above] on May 20, 1824.  At age 16 he was apprenticed to a cotton manufacturer, Godfrey Scheitlin,.  In two years his industry and aptness were rewarded by his appointment as overseer,  which he diligently pursued for the next five years. 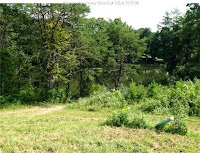 In 1847 he joined the tide of emigration which flowed toward the shores of America.  While in New York he was appointed the agent of large tract of land in Virginia.   He met Ursula Scheitlin, an old girlfriend and also the sister of his former employer.  They soon married and she accompanied him to the scene of his labor for the next ten years.  It was a wild region [Cabell County, now West Virginia, shown here]  and offered none of the comfort and convenience of life.

He opened a country store, cleared and cultivated a farm and met with fair success.  Five children were born while the Oswalds were in the South.  Only one survived.

In 1857, he sold out and came to Minneapolis, where Godfrey Scheitlin, his former employer and now brother-in-law, had preceded him.  He opened a general store with his brother Henry Oswald and after a year bought out his brother’s interest.  He moved his stock goods to the old land office buildings in lower town.  In the spring of 1859 took a new partner, Mathias Nothakel.  The firm continued in business until 1862, when both members sold out.

He then bought a 160 acre farm named “Oak Grove,” which was on the site of the present Bryn Mawr area of Minneapolis.  Experimenting with an unusual crop for Minnesota, he raised tobacco and made a success of it for two years, but the tobacco was destroyed by frost in August 1863 and he never repeated the attempt. Oswald had a fondness for horses, which he bred and raised.  His mares brought him nine colts, every one a trotter and some breaking world records.

His knowledge of wine making in the valleys of his native land directed his attention to the adaptation of the fruits of this country for wine.  In 1858, he and Godfrey Scheitlin experimented in the the manufacture of native fruit wine.  The experiments proved a great success.  In 1862 Oswald constructed a wine cellar on his farm, and engaged in the manufacture of wine on an extensive scale.  “J. C. Oswald’s Native Wines” became celebrated and brought orders from distant places. 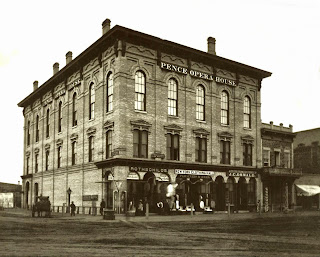 About 1866 he added to the wine business that of distilled liquors and established the first wholesale wine and liquor business in Minneapolis.  [Normandy Rye, Monogram Whiskey and Nelson Rye among his brands.]  The first location was an old stand at the corner of First Street and Hennepin Avenue.  In 1867 he moved to No. 3 Pence Opera House. 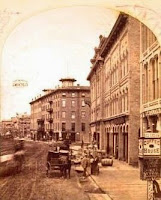 In 1874 he erected a four-story brick store at No. 17 Washington Avenue North, where he stayed until his death  [the building at the far right of the photo]. In 1881 he associated with Mr. Theophil Basting, who long had been manager of the business and also his son-in-law.  The firm’s name was J.C. Oswald and Co. That same year he had a huge elegant home built at 1332 Hennepin Avenue [below].

Oswald always took an active interest in public affairs.  He was on the Board of Commissioners who directed the building of the present County Courthouse in Minneapolis.  He was instrumental in the development of the first electric street car system.  For many years he was a member of the Park Board.  During these years the foundation of the magnificent park system of the city was laid, and its plans largely perfected. 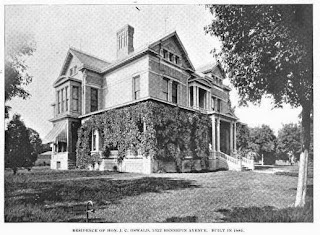 Oswald was a distinguished looking man.  He had piercing eyes, white hair surrounding a bald top and a white General Custer style mustache and goatee.  In 1887 he was elected to the State Senate and he held the office for four years.  At this time he sold his farm, 119 acres of it going for nearly one-half million dollars. 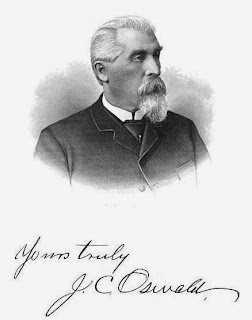 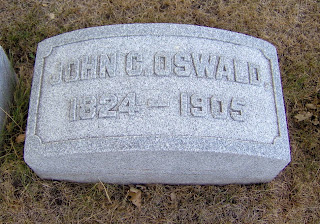 Note:  Oswald is buried in Section 2, Lot 136, Grave 4, of Lakewood Cemetery in Minneapolis.  His headstone is shown here.  The "fancy" jug for Normandy Rye, shown above is a 2018 arrival to this post.  It graciously was sent to me by Verlyn Durene, a Minnesotan who eagerly has sought Oswald materials and artifacts.

Posted by Jack Sullivan at 6:58 AM