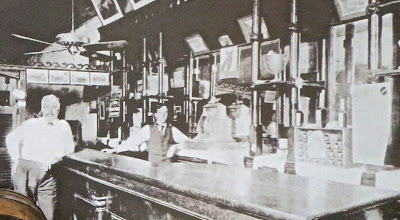 Note:  The tall, distinguished-looking man above standing in front of his bar is Edward Sheehan, saloonkeeper, liquor and beer dealer and bottler of soft drinks in Augusta, Georgia.  Sheehan’s story is one of an enterprising  immigrant Irish boy who made good in America.  As in the past, when a valid account already exists of a notable whiskey man, I try to use it.  In this case a short biography was written several years ago by Sheehan’s great grandson, Atty. Chris Edwards of Jupiter, Florida,  With his kind permission it is reprinted here. 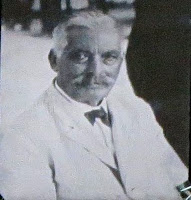 Edward Sheehan [also shown left] was born in Castlemagner, County Cork, Ireland, on June 24, 1849 (his birth name was “Edmond,” but he was known as “Ed” and upon immigrating to America, everyone assumed his name was “Edward,” so he adopted the name to avoid confusion.)  He was baptized in 1849 in Mallow Parish, County Cork, by the Reverend W. Hogan. Edward was the son of Edmond Sheehan and Catherine Ring. He spent his childhood on Bitter Hill Farm, where he helped his father try to make a living as a wheat farmer.

In 1864, when the rent on the property became excessive, his father shipped him and his three elder siblings to America in the company of their cousin, James.   Edward was only fifteen years old at the time. They sailed from Cork in an overcrowded disease-ridden cargo vessel called a “coffin ship.” Their fare only included transportation so they had to bring all their own provisions for the journey.   They arrived in New York Harbor in early 1865, where James took up residence in Brooklyn, establishing a branch of the Sheehan family in the state of New York.

Edward and his siblings then traveled south to Savannah, and finally made their way to Augusta, Georgia, where they arrived on February 14, 1865. They were taken in by two Irish families, the Barretts and Harrises, who lived on Milledge Road.  Edward Sheehan soon found employment at a city bottling business, washing bottles by hand. He started work each morning after attending six o’clock mass, worked all day, and then went to the local night school under the instruction of Professor Pelot.  Four years later, in 1869, he and his family had saved enough money to send for their parents, Edmond and Catherine.

On October 27, 1874, Edward Sheehan married Anna Catherine Hickey, the daughter of John A. Hickey and Mary Hallinan, who had immigrated from County Limerick, Ireland, in 1851 (Annie’s birth on June 20, 1851 was first noted in New York City, where she was baptized, however, she may have actually been born during the passage across the Atlantic Ocean.) Edward and Annie were married in Augusta, Georgia, by Father O’Riley in what was then called St. Patrick’s Church (now the Church of the Most Holy Trinity). His best man at the wedding was also his best friend and future business partner, James Doyle.

Edward Sheehan and his new wife, Anna Hickey, moved to Savannah, where Edward worked at several places, including a grocery store. He was then taken under the wing of John Ryan at the John Ryan Excelsior Bottle Works on Bay Street near the Savannah River. In 1880, when yellow fever broke out in Savannah, Edward Sheehan sent his pregnant wife and two young children (John & Catherine) back to Augusta, Georgia.  Their son, Edward “Knockie” Sheehan, Jr., was born later that year on October 27, 1880. Edward and Anna eventually had thirteen children (three of whom died during infancy). 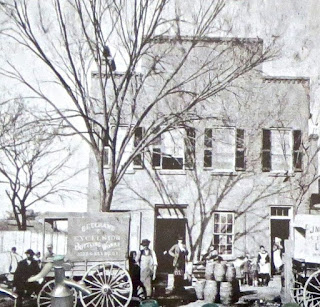 In 1882, after rejoining his family in Augusta, Edward started the Sheehan Excelsior Bottling Works with his old friend James Doyle. The company was originally located at 1025 Greene Street, but in the 1890’s was moved to the 1100 block of Broad Street, right next door to a bar. The company’s mainstay was the beer they bottled for another firm, but Edward also marketed his own soft drinks, including sarsaparilla, orange juice and lemon soda.

Toward the end of the century, Edward and his family moved into a five-bedroom house at 1334 Broad Street. The house had a big front porch with a hallway running the length of the house from the entrance to the back porch. On the ground floor were a front parlor, sitting room, dining room, butler’s pantry and an enormous kitchen. The bedrooms were on the second floor along with one bathroom near the back porch. 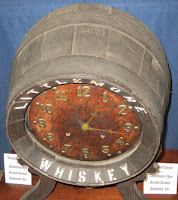 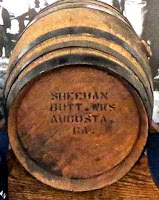 The house was built next to the home of Mayor Walsh, who offered a small pecan tree to Edward as a housewarming gift. Edward declined the offer, explaining that the horses and wagons from his transfer company would surely trample over the small sprig if planted in his front yard. Mayor Walsh then planted the tree next to the fence that separated their two yards and invited the Sheehan children to gather as many of the pecans from the tree as they desired. The tree is still standing in the Curtis Baptist Church parking lot (Edward’s house was demolished in the 1950s to make room for the parking lot.)

Edward was a man of great stature, both physically and in character. He stood six feet two inches tall, but was known to be quite a gentle man, never raising his voice or using a word of profanity. He did not smoke or drink, and his whole life was centered around his family, church and business. When his brother, Michael, drowned in the Savannah River on November 4, 1896, Edward assumed financial responsibility for his wife and young children. Edward was also a devoted and generous member of the Sacred Heart Church, and he attended mass on a daily basis. He donated the “Marriage Feast of Cana” stained-glass window in the church in memory of his younger brother, Michael. 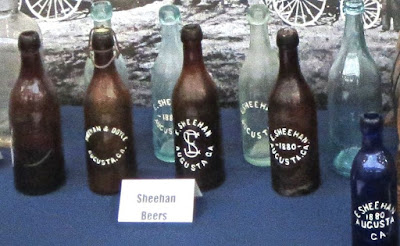 As the century turned, Edward shortened the name of his bottling company to Sheehan Bottling Works. During this period of time, he was also approached by representatives of the Coca-Cola Bottling Company concerning the possibility of operating a bottling franchise in the Augusta, Georgia area. Prior to 1899, Coke was a small business which only sold syrup to soda fountains, but that year they divided the country into territories and started selling the bottling rights to local entrepreneurs. 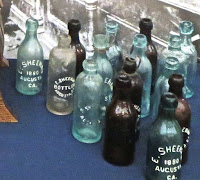 Edward had an opportunity to become the first bottler of Coke in his area of Georgia and South Carolina. He declined the offer because he thought Coca-Cola was a fad, and he preferred the taste of his own sodas. By 1909, nearly 400 Coca-Cola bottling plants were operating, most of them family-owned businesses. Edward did, however, start to branch out into other businesses. He continued to operate his transfer company, and he also opened a grocery store, as well as several saloons and bars. In addition, he managed the Robert Portner Brewing Company.

Edward’s wife, Annie Hickey, died on June 24, 1912, of cancer, and was buried in Magnolia Cemetery in Augusta, Georgia. Annie’s younger sister, Mary Hickey, was a Catholic nun who became Mother Superior of the Sacred Heart Convent in Augusta, Georgia. After the death of his wife, Edward Sheehan continued to operate his businesses, but also started to spend more time with his children and grandchildren.

As a hobby, he raised “game” chickens in his back yard with his eldest son, Johnnie. These chickens were used for cockfighting, not eating. At any given time, Edward and his son would have hundreds of “biddies” in an incubator they kept near the chicken coop. Edward also took care of the family horse “Row Locks,” which he housed in the stable behind his home.

When World War I broke out in 1916, Edward Sheehan started having difficulties replacing the bottles in his business. Unfortunately, there was no deposit system in place, and a bottle of soda only sold for five cents a piece. When prohibition was ratified in 1919, his business began to crumble.

Edward Sheehan died in Augusta, Georgia, on December 26, 1922, his bottling business at an end. He was buried in Magnolia Cemetery next to his beloved wife, Annie. Prior to his death at the age of 72, he had the distinction of being the oldest living independent bottler in the nation. 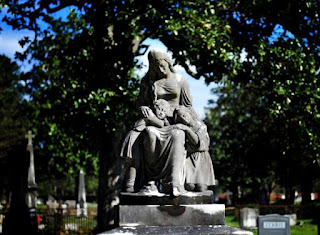 His youngest son, Aloysius “Bubba” Sheehan, died the following year. His eldest son, Johnnie, thrived during prohibition, both as a bar owner and bootlegger (although he claimed never to have consumed the whiskey he sold). Johnnie was arrested seven times during the years of prohibition and he and his employee (a black man named Will Davis) took turns going to jail. Their cell had rugs on the floor, curtains on the windows, and a door that was never locked.

Afterword:  Some of the images I have added to Chris Edward’s biography come from photos of a display created by Augusta bottle collector, Walter Smith, who graciously allowed me to take and use them.  Other assistance came from Bill Baab who has written a much more comprehensive account of Sheehan’s career in his informative book “Augusta on Glass.”  Bill added the following comment:  "Edward Sheehan established his Excelsior Bottling Works on his own in 1880, celebrating his independence by dating all of his bottles with that year. Doyle was employed by the Augusta Brewing Co., as a wagon driver. Sheehan was best man at Doyle’s wedding and vice versa. Sheehan & Doyle existed in business only one year – 1888. For reasons unknown to the family, the two separated in 1889, Doyle returning to the brewery, They may have been best of friends, but did not click as businessmen together."

Posted by Jack Sullivan at 7:18 AM