In January 1896, the San Francisco Call reported on a legal battle related to the economic viability of the Yellowstone Saloon at 22 Montgomery Street, the major commercial avenue shown below.   The original owners, brothers John H. and Harry Wise had sued James T. Murphy and F. Smalley for money owning them on a half interest they had sold the pair in the drinking establishment.  Murphy and Smalley countered by charging that the Wises had lied to them about the profitability of the Yellowstone. 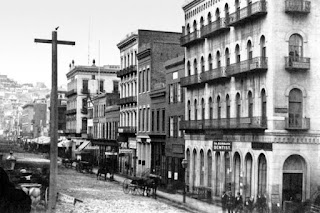 They claimed the brothers had told them the saloon was worth $20,000, half a million in today’s dollar.  Moreover, it was put to them that Yellowstone took in $100 a day and that expenses were $35 a day.  As related by the newspaper:  “They say that these figures are all wrong and that, as a matter of fact, the saloon is not worth $10,000” — apparently the amount of their debt.

However the case was settled, two month later the Yellowstone was worth even less.  In March the place caught fire early one morning.  Although the fire patrol was commended for quick action the interior suffered damage, including some loss of stock and fixtures. 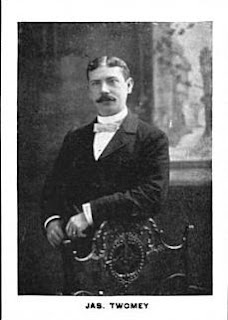 Enter James Twomey and Vincent Miholovich.  Sometime in the months following the fire, they entered on the scene and by 1898 their names appear as “proprietors” of the Yellowstone Saloon.  Twomey was 38, an immigrant from Ireland born in 1860.  Shown right, a dapper looking gent, he was unmarried, living at a rooming house on Geary Street.  Miholovich was two years older, an immigrant from Montenegro, then part of the Austro-Hungarian Empire.  He was married to a woman named Kristina and the couple had one daughter.

Together Twomey and Miholovich set out to build a new reputation for the Yellowstone Saloon.  One strategy was to emphasize their proximity to San Francisco’s grandest hotel, the Palace, shown below.  This hostelry had been opened in 1875 to great fanfare.  Under construction for four years, the Palace Hotel. below, was a stunning edifice.  The skylighted open center of the building featured a Grand Court overlooked by seven stories of white columned balconies.  It attracted the rich and famous alike.  The Yellowstone Saloon was only a half block away, an easy walk. 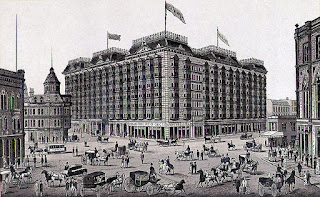 The partners tried to emulate “Palace” class in their advertising.  As in the ad shown above, they made a play for the college crowd, advertising regularly in Stanford University publications, like the “Sequoia,” a bi-weekly newsletter.  Other Twomey and Mihalovich ads exhibit the an “art nouveau” style and elegant restraint that can only be considered remarkable in the saloon trade. 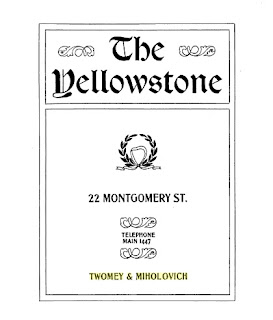 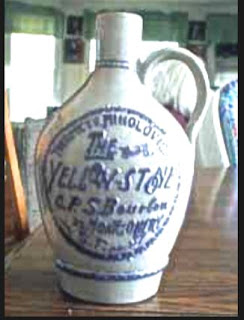 What first sparked my interest in the Yellowstone Saloon and the men who ran it was their choice of containers for the whiskey they were selling to retail customers.  They fancied pint sized jugs in white Albany slip with their label on the front.  The jug at right deserves special mention.  It advertises The Yellowstone C.P.S. (copper pot still) Bourbon in a distinctive container.  The design identifies it immediately as a product of White’s Pottery in Utica, New York — often referred to as “White’s Utica.”  The partners had reached more than 2,800 miles across the United States to commission this jug — an expensive effort but one that made their whiskey distinctive in San Francisco. 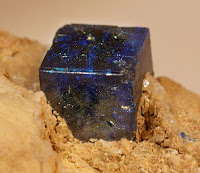 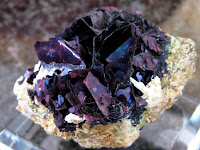 To these merchandising measures, Twomey & Miholovich added another attraction at the Yellowstone Saloon. It held, as one commentator noted:  “One of the most varied and interesting collections of minerals to be found in the state.”  The partners collected interesting rocks for years and displayed them in their drinking establishment.  Their assemblage included nuggets of gold, silver, copper, antimony, lead, tin, quicksilver, nickel and cobalt as well as “rare ores” such as covelite, shown left, and boleite, shown right.  The collection also featured semi-precious stones such as opals, agates, topaz in lava, and quartz.

The Yellowstone Saloon minerals exhibit was reputed to be “a great attraction to visitors,” even those not interested in mining.  The proprietors welcomed questions about the items and, it was said, “all information is freely and cheerfully furnished.”  It probably did not hurt to buy a drink first at the Yellowstone bar. 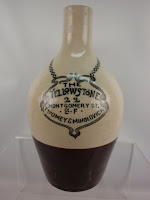 Surviving the great San Francisco earthquake and fire of 1906, the Yellowstone Saloon continued to prosper.  The Pacific Wine & Spirits Review reported to its readers that patrons of the “famous” Yellowstone Saloon need not fear “a possible dearth in their favorite resort.”  Twomey and Miholovich had the largest and best supplied cellars of all the retailers in San Francisco, the trade paper reported.  The partners apparently continued to operate their watering hole until the onset of National Prohibition.  I have been unable to find details of their later lives or what happened to their minerals collection.

It is sufficient to say that James Twomey and Vincent Miholovich had made a smashing success of the Yellowstone.  By dint of hard work and imagination they had resurrected a saloon that was “on the rocks,” and by featuring a roomful of rocks, made it one of San Francisco most notable.

Posted by Jack Sullivan at 6:31 AM