In the days before Prohibition, selling whiskey was an extremely lucrative business.  Many a liquor dealer could be said to have smiled “all the way to the bank” as he deposited the week’s profits.  Patrick J. Kelly went one step further.   This Minneapolis whiskey man also operated the bank.
No one could have predicted Kelly’s business success.  He was born in Hannibal, Missouri, in 1868, just two years after his parents John and Mary (Canty) Kelly had left Ireland and come to America.  Patrick received his education in Hannibal schools, but left during his teens to work on the railroad.  He departed Hannibal in 1890 at the age of 22 for Sioux City, Iowa, soon leaving there for Mankato, Minnesota.  My surmise is that Kelly was engaged in some aspect of the liquor trade in  Mankato.   He also found time in 1904 to marry there.  His bride was Celia Morain, about ten years his junior and a native of Iowa.  They seemingly had no children. 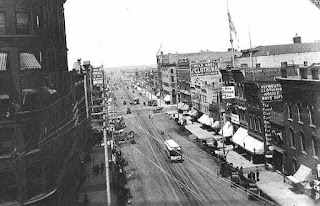 Kelly arrived in Minneapolis in 1906, apparently primed to open his own liquor business.  In 1890 a local named J.C. Oswald had opened a wholesale/retail whiskey store at 17 Washington Avenue, North, shown above.  After Oswald died in 1906, Kelly, with a partner, took over the business renaming it The Kelly-Steinmetz Liquor Company but remaining at the same address for the next decade. 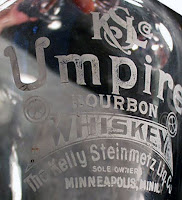 The company was not only selling liquor, it also was rectifying whiskey, that is, blending and compounding the raw products, bottling the results, and selling them under its own brand names.  They included: “Umpire,” “Tandem,” “Green Leaf,” and “KSL Co. Monogram.”  Those labels seem to have been successful.  In 1910 and 1911, Kelly took steps to trademark his brands, indicating a concern about infringements.  He also had his own brand of gin, called “Tanager” that he blended and bottled himself.

As shown here, and below, he also issued “back of the bar” bottles for several of them.  Those would have been given to favored customers such as saloonkeepers and bartenders.  Kelly also provided advertising shot glasses and saloon signs.  One sign for his Tandem Whiskey was particularly attractive, showing a Gibson Girl being driving by  two horses in a tandem hitch team.  The motto was “One Drink Followed by Another.”

Even as his liquor enterprise was flourishing, this enterprising Irishman could see Prohibitionary pressures reducing his markets.  In 1914, for example, the State of North Dakota, having gone “dry” deemed his shipments of Umpire Whiskey into the state as “in violation of the beverage law” and liable to prosecution.  As a result Kelly looked for other business opportunities.  One presented itself in the field of banking.  With others he organized the Gateway State Bank, formed in September 1915, soon after becoming its president and chief executive officer.  By 1923 it was capitalized at $100,000 ($2.5 million equivalent today) and had on hand cash of $50,000.  Gateway was described in the local press as “one of the substantial and growing banks of Minneapolis.” 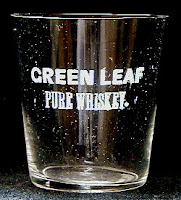 Meanwhile Kelly was active in Democratic Party politics, he never ran for office. He also was involved in local social organizations, including the Minnesota Athletic Club, the Elks Club, and the Interlachen Country Club.   Closest to Kelly’s heart was his relationship to the Minneapolis Baseball Association and its often winning team, the Minneapolis Millers, where he was a director and treasurer.

In 1916, with prohibitionary force gradually “drying up”  markets for his whiskey, Kelly moved to new and likely smaller quarters at 25-29 North Second Street.  By 1918 as National Prohibition threatened, he shut down his liquor business completely.  The firm became Kelly Brothers Company, a real estate development and investment enterprise.  Patrick also became a director of the Franklin Motor Car Company, a popular automobile at the time. 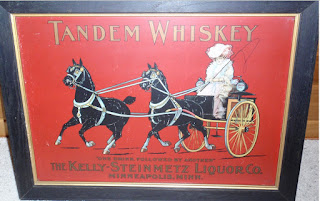 The 1920 U.S. census found him, age 51, at home with his wife, Celia.  Asked his occupation, he said “none,” likely still smarting over the end of the Kelly-Steinmetz Company and ignoring his other business activities.  Kelly was still living at the age of 71, still at the same West 22nd Street address in the 1940 census with Celia still by his side. This time he gave his occupation as “president-real estate company.”   I cannot find his date of death or place of interment.
A final word on this remarkable whiskey man can be taken from in his biography in the 1923 volume, “History of Minneapolis, Gateway to the Northeast,” edited by Dr. Marion Shutter.  That publication asserted:  “Mr. Kelly…in all things he has undertaken has met with success, wisely and carefully directing his interests along the paths that led to prosperity.”   These words remind us that the main path Patrick Kelly trod regularly was from his liquor business, smiling all the way, to the bank -- his own bank.