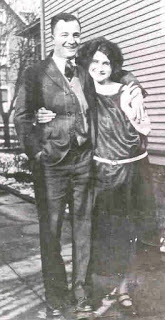 It must have seemed like the perfect scheme. With accomplices, Ralph Parilla, a Youngstown, Ohio, saloonkeeper and liquor dealer closed down by prohibitionary laws, in 1919 planned to remove barrels of whiskey that he owned from a government-guarded warehouse under the pretext of exporting them to Canada.  He first would extract the whiskey, substitute water, and truck the results over the border. The whiskey he could bottle and sell. Then things went terribly, terribly awry.

Shown above in a happier day is Parilla with his wife Rose.  He had been born in Caserta, Campania Province, Italy, in 1884, the son of Sylvestro Parilla, who brought his wife and family of four boys to the United States in 1889, when Ralph was only five years old.  The family settled in Youngstown, Ohio, a city with a sizable Italian population.  Parilla was educated in the city’s public schools and it may be there he met the love of his life, Rose, a girl also of Italian extraction.  They married circa 1903 when he was 19 and she was just 16. 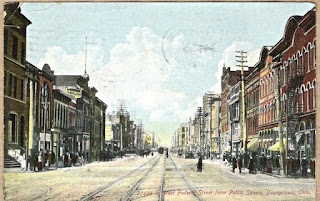 At the time they wed, Parilla was working as a clerk, according to city directories.  Four years later he was recorded running a saloon at 324-326 East Federal Street, shown above.  About the same time he also appears to have been managing a whiskey rectifying business down the street at 229 West Federal.  It was called the Crab Creek Distilling Company, Crab Creek being a tributary to the Mahoning River that runs through Youngstown.  The company logo shown below is from a letter written by Parilla in 1906. 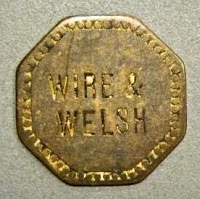 The company was blending and bottling “raw” whiskeys it likely received from the only true distillery in the area.  That was Wire, Welsh & Company in nearby New Middleton, Ohio.  Represented here by a trade token, this distillery had formed in 1889 when Ezra C. Welsh, a liquor salesman, became partners with Solomon M. Wire, a distiller.  Their facility was known in federal records as Registered Distillery #5, Tax District #18 (Ohio).

Apparently business early on was good for Parilla both at the Crab Creek address and his saloon.  Unfortunately, he was late to the liquor party.  The forces of prohibition were on the march in Ohio and the Nation.  The Crab Creek facility appears to have closed about 1912.  As late as 1917, however, Parilla advertised a liquor and beer wholesale and retail house at a new address, 330 East Federal Street.  His ad shown below signaled the possibility of future problems when it read:  “Bottled-in-Bond Whiskey Our Specialty.”

In order insure a regular supply of product, Parilla evidently had contracted with Wire, Welsh, who had a bonded warehouse, for a number of barrels of their whiskey, paying down cash and owning the whiskey on their premises as it aged.  With the imposition of Ohio’s statewide prohibition in 1918, the Italian immigrant was forced to shut down both liquor sales and his saloon.  Perhaps worst of all, he had thousands of dollars tied up in barrels of whiskey languishing in the Wire, Welsh warehouses.  The War Prohibition Act had made it impossible for him to remove it and National Prohibition was just around the corner.

In 1919 Padilla had an idea.  No legal way existed for him as an owner of whiskey in bond to get it out — except to export it.  The law allowed him, upon getting an federal permit, to withdraw the whiskey from the warehouse without paying taxes, by giving a bond that he would forfeit if the whiskey were not within a prescribed time passed out of the U.S. through a designated port of export.  Recalling for us the Biblical miracle of “water into wine,” Parilla hatched a scheme to make whiskey into water.

A saloonkeeper named Henry C. Dammeyer who also had whiskey in bondage and Parilla applied for export permits, posting $30,000 bond to get 75 barrels from the warehouse ostensibly to be sent over the border from Niagara Falls to Canada.  The plot was that on the way they would substitute water for whiskey and export the barrels of water.  They had arranged with a trucker, David Friedman, to carry the tampered cargo.  It was a triple “killing.”  Padilla and his partner would have 1) retrieved their whiskey investment, 2) avoided the $6.60 per gallon tax, and 3) have the liquor in their possession to bootleg later at high prices.

At first the plot seemed to go well.  Friedman, with the help of two brothers, brought barrels to a farm Parilla owned on the outskirts of Youngstown.  There Parilla, likely with others, syphoned off the whiskey into smaller containers through small holes in the barrels that could be covered and concealed once the water had been substituted.  Other barrels were transported to Dammeyer’s shuttered saloon for processing.  Then things began to unravel.

Along the line, the plan to truck the watered barrels to Canada was abandoned and the conspirators decided to obtain a railroad car and load the barrels there. The process of obtaining the whiskey from the warehouse raised suspicions, however, and were communicated to Fred Counts, a government agent for prohibition enforcement.  Working with other federal agents Counts spent 24 hours gathering evidence and the next day authorities popped into Dammeyer’s saloon.  There they found one of the men with a pump and a hose in his hands, filling a barrel with water.  Dammeyer and his accomplices were promptly arrested.

Then Counts went looking for Parilla, fingered by the others as the “mastermind.”  On the farm Counts found the empty barrels, soon caught up with Parilla, arrested him, and took him to jail.  The gambit proved costly to Parilla and Dammeyer who immediately forfeited their $30,000 bond to the Feds. Each also was required to post $10,000 personal bond to get out of jail, the sum total equivalent to $1 million today.

On trial in Federal Court, Parilla and his co-conspirators were found guilty but appealed the decision on technical grounds to the U.S. Sixth Circuit Court of Appeals. That court proved equally unsympathetic and upheld their convictions and fines.  There is no indication that they served jail time.  Their names and crimes, however, were splashed all over newspapers in Ohio and beyond.  Afterwards, Parilla seems not to have sought other work.  The 1930 census found him living with wife Rose at 173 West Chambers Street in Youngstown with his occupation listed as “none.”  With the couple were their three children, William, 27; Ralph,15; and Rose M.,13. 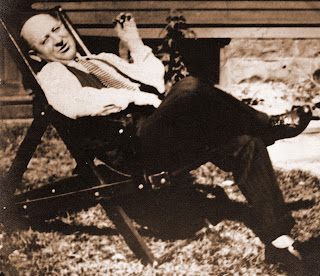 The disastrous scheme Parilla had perpetrated seems to have left him unbowed.  A photo of Ralph in his early ‘50s shows him relaxing on a lawn chair with a half-smoked cigar in his hand, smirking at the camera, the picture of contentment. Parilla did not have much longer to live, however, dying at the relatively young age of 53 in July 1938.  With his widow and children grieving by his graveside, he was interred in a family plot in Youngstown’s Calvary Cemetery.  Rose joined him there in 1965. 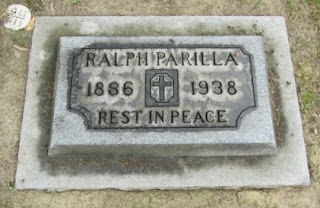 Ralph Parilla deserves to be remembered as a whiskey man who thought up one of the most audacious conspiracies in American history to circumvent the laws of Prohibition and avoid federal liquor taxes.  His attempt at turning whiskey into water fell considerably short of being a miracle, however, in the end becoming only what might be better described as the “Youngstown debacle.”

Note:  Much of the information about Parilla’s “whiskey into water” scheme came from the extensive details provided in the opinion of the judges of the Sixth Circuit Court of Appeals in the case of Parilla et al v. United States, dated May 12, 1922.