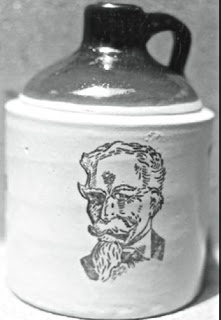 The face seen at right is, perhaps, the most imposing visage to be seen on an American stoneware whiskey jug.  The imposing eyebrows, the thick mustache, and the goatee mark the individual as a quintessential Kentucky colonel.   He was the emblem of Glenmore whiskey, a product of James Thompson and later his sons.   Over time the Thompsons, even as they prospered, saw fit to “shrink” the colonel.

As several authors have pointed out, there is no consensus about when or how the Thompsons or Glenmore appeared on the Kentucky distilling landscape.  James Thompson is said to have been born in May 1855 in the town of Eglington, County Derry, Northern Ireland, and emigrated to the United States in 1871.  He is reputed to have arrived here at 16 with only the clothes on his back.

Thompson had a singular advantage.  He was related to the Brown distilling family of Kentucky.   About 1873, the firm of J.T.S. Brown, Chambers & Co. had been established in Louisville and was producing whiskey.  Records indicate that in 1876 James was hired by the firm as a salesman.  Three years later, joining with another salesman, George Foreman, Thompson formed a sales agency to represent Brown, Chambers & Co. as a broker, selling spirits to both wholesale and retail customers. 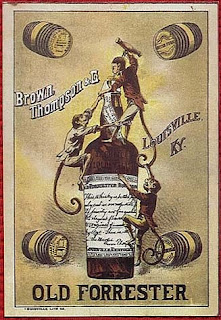 When Chambers retired in 1881 he sold his shares in the Louisville plant to Thompson and his cousin, George Garvin Brown, with Foreman as a junior partner.  The distillery became Brown, Thompson & Co.  Shown here is a trade card from the company, showing its flagship brand “Old Forrester.”  For the next nine years this triumvirate ran a highly successful whiskey business.  As time went along, Thompson apparently was anxious to strike out on his own.  The opportunity arose in 1901.  Richard Monarch’s distillery in Owensboro, Kentucky, had gone into bankruptcy about 1898 and facility went on the auction block in 1901.  Thompson with his  brother, Francis P. Thompson, jumped at the chance to buy it for a “bargain basement” $30,000.

Thus was born the firm of  “Jas. Thompson & Bro. Distillers and Whiskey Merchants.”  The company had its Louisville offices in a building at First and Main Streets that had been vacated in 1900 by the N. M. Uri Co.  The distillery itself was located two miles east of Owensboro, a distance of more than 100 miles from Louisville.  Insurance records and an illustration below dating from 1892 indicate that it was a relatively small operation. The property also included a cattle shed where cows were fed the spent mash. 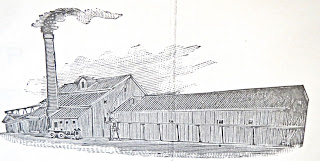 Subsequently a legend has grown up that Thompson founded the Owensboro distillery, and named it and the flagship brand Glenmore after a castle in his native Ireland.  Not so.  As early as 1893, Monarch had called his plant “The Glenmore Distillery Company” and featured a Glenmore label he boasted as “the queen of Daviess County whiskies.”   It was Thompson, however, who hooked the brand to the Kentucky colonel.  Shown below is the flip side of the jug above. 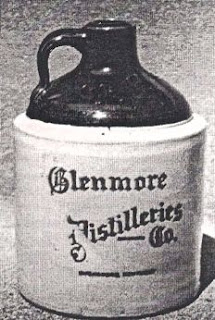 Thompson wasted no time in making improvements.  He hired his wife’s uncle, H. S. Barton, to upgrade the plant which had been dormant for a time.  Barton became the master distiller and plant manager, positions he held until 1919.  The new ownership greatly expanded the facility until it was capable of mashing 5,500 bushels, considered at one time to have been the largest capacity in Kentucky.   This permitted Thompson to market multiple brands in addition to Glenmore.  They included “Kentucky Tavern,” “Old Black Thorn,” “Old Chauncey Bourbon,” “Old Velvet Corn,” “Old Thompson,” and “Jefferson County Bourbon.” 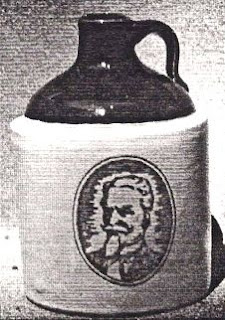 Somewhere along the line, Thompson seemingly decided that his Kentucky colonel visage was too severe.  The artist had given him a look of intensity, bordering on a scowl that rendered him very formidable looking, indeed.  The colonel might well have been modeled on the fanatical John Brown of the Harper’s Ferry raid.  As the most striking face ever to appear on an American whiskey jug, perhaps the portrait was just too strong.  A later jug, shown here, definitely toned down the Colonel.  The bust was now smaller and within an oval medallion.   The Colonel’s eyebrows no longer were bushy and his beard was trimmed.   The scowl was gone and he seemed to be smiling.  He could have been someone’s favorite grandfather. 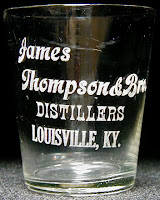 With his growing wealth and reputation as a leading Kentucky distiller, Thompson showed a flair for the giveaway items common in the whiskey trade, gifting his customers with attractive etched shot glasses advertising his distillery and products.

He also showed a taste for elegance by building his wife and family an impressive mansion about 1894.  Shown here, it is significant as an example of American eclecticism, combining the shingle style with Queen Anne motifs.  Thompson’s mansion boasted a porch with columns that surround three sides of the house and details such as oval windows and leaded glass.  Today it is on the National Register of Historical Places. 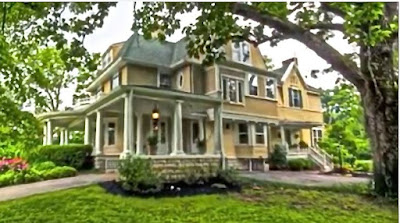 At the conclusion of World War One, James took his sons, Frank B. and James P., with him into the business.  By that time he had bought up several other Kentucky distilleries and is said to have been producing hundreds of whiskey brands.  Together the family weathered the coming of National Prohibition in 1920.  Their first effort was to make and sell vinegar.  “We didn’t do very well at it,” Frank Thompson admitted later. They found success, however, in lobbying for and becoming one of a handful of distilleries in the country allowed to operate on a limited scale for “medicinal uses.”  With prescriptions for spirits exploding in number during 14 “dry” years, this privilege proved very lucrative. 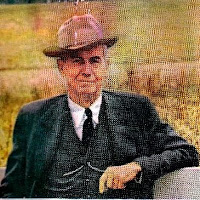 Sadly, James Thompson died in 1924 at the age of 69, never to see Repeal. Frank, shown left,  became the chairman and president of the Glenmore Distilleries.   He was destined to become a true colonel, joining the U.S. Army in World War Two as a private and rising through the ranks to a lieutenant colonel and battalion commander.  With the end of Prohibition in 1934, unlike other Kentucky distillers, the Thompsons already were up and running with some 31,000 barrels of aged whiskey in their warehouses and Glenmore Distillery cranked up to make more.

In the post-Prohibition era, a final indignity was done to the Kentucky colonel.  Although the Glenmore brand was revived and packaged in stoneware as before, the once commanding visage was reduced to the size of a finger smudge. Finally, as if to add insult to injury, the distillery subsequently abandoned the tradition of stoneware packaging in favor of glass — glass made to look like ceramic.

Surviving floods and fires, the Glenmore Distillery, shown below in the 1930s, went on to fill its two millionth barrel of whisky in 1946,  The Thompson family maintained control of the distillery until 1991 at which time it was acquired by another firm of Northern Irish heritage, Guinness.  In recent years the Owensboro facility has been through many ownerships and name changes.  Although distilling ceased there in 1993, it remains one of the major whiskey bottling facilities in the U.S. 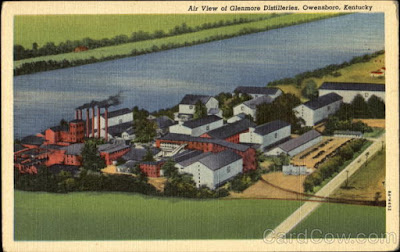