The Wisdom of Solomon Herbst and Naming “Old Fitzgerald”

“Old Fitzgerald” is one of the truly iconic names in the whiskey trade.  The legend has been that this liquor first was produced by a master whiskey-maker named John E. Fitzgerald at a distillery near Frankfort, Kentucky.  Solomon C. Herbst, a Prussian-born wholesale wine and liquor dealer in Milwaukee, knew the tale well.  In fact, with the canny wisdom his Biblical namesake, Herbst wrote the script for the story when he bought the distillery.

Born in 1842 in Ostrono, Prussia, and educated in local schools, Herbst left his homeland in 1859 at the age of 16 for the United States.   Many German youth, including my own Grandfather, emigrated at that stage, many avoiding the Prussian military draft with its high death rate for recruits in basic training.  Herbst seems to have headed directly to Milwaukee, a city with a large German population where the language widely was spoken.  The 1860 U.S. census found him, age 18, living Milwaukee’s Third Ward with a family named Nathan.  He was working as a tinsmith.

Herbst soon understood that other employment opportunities offered greater reward.  In 1868 at the age of 22 he emerged in Milwaukee as a partner in wholesale liquor firm called Eggart & Herbst, located at 401-403 Chestnut Avenue, later to be changed to West Juneau Avenue.  By 1870 Eggart had departed the scene and left Solomon as the sole proprietor.  The  name of the enterprise became S.C. Herbst Importing Company.  According to Herbst’s newspaper obituary it was a “small beginning” for his liquor business.

During this same period Solomon had married.  Described as 5 feet, 9 1/2 inches tall, with gray eyes and an oval face, his hair already was beginning to gray.  His bride was Emma, a Wisconsin-born woman seven years his junior whose parents were immigrants from Bohemia, now a region in the Czech Republic.  The 1880 census found the couple living on Milwaukee’s 14th Street, an area of large homes, with their three daughters, Carsie, 12; Della, 6, and Helen, 4.  Indicating Herbst’s growing wealth, the household boasted two servants. 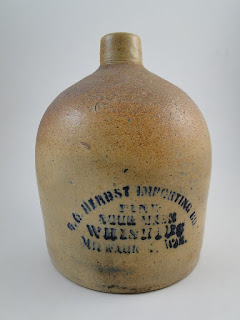 Herbst began his career as a “rectifer,” that is, someone blending and mixing raw whiskeys in order to achieve a certain taste, smoothness and color.  For his wholesale trade he packaged his products in multi-gallon stoneware jugs.  These were then stenciled in cobalt with his name and other information.  For his retail trade, he used glass.  Shown here is an amber quart bottle embossed with his name. He also issued flasks, like the two Herbst bottles, amber and clear, shown below.

As Herbst’s liquor trade grew, he likely was facing a problem in obtaining sufficient raw product for his rectifying activities.  Competition for supplies from Kentucky and other distillery sources, as well as attempts to create supplier “trusts,” were driving up prices and drying up available sources of whiskey.  Like many wholesalers, Herbst looked for a guaranteed flow of supplies.  About 1900 he found and bought a small distillery located outside Frankfort on Benson Creek.  The locals called it the “Old Judge Distillery” for its flagship brand.  In Federal parlance it was known as Registered Distillery #11 of the Seventh Revenue District.

Now owning his own plant, Herbst began to fashion a myth for it.  He recognized that giving his own name to the distillery might not resonate far in Kentucky and spun a story, still perpetuated by some authors, that the distillery had been built by an Irish master distiller named John E. Fitzgerald who then sold the facility to him.  Fitzgerald then had moved to Hammond, Indiana, to run another distillery, so the story went.  In reality, Fitzgerald was a U.S. Treasury agent assigned to bonded warehouses who had a reputation as a heavy drinker with a taste for the best in whiskey.  Using his post to good advantage, he held the keys to the warehouses of his assigned distilleries. While the owners discretely looked the other way, John E. frequently tapped the best barrels for his personal consumption.  As word spread in the trade about the revenue man’s practices, prime whiskeys began to be known as “Fitzgeralds.”

Even before buying the distillery Herbst had recognized the attraction of an Irish name and in 1884 registered the brand of his flagship blend under the name “Jno. E. Fitzgerald.”  With his purchase of the Frankfort distillery, in 1905 he re-registered that name, adding a second label as “Old Fitzgerald Bourbon.”  Vastly expanding the plant size and capacity to become one of the largest distilleries in the country, he renamed it the Old Fitzgerald Distillery Co.  An illustration below shows the name on all the buildings and even on freight cars being transported past the site.  To run this major facility as manager and master distiller Herbst hired Jerry Bixler, a member of a highly respected Kentucky whiskey-making family. 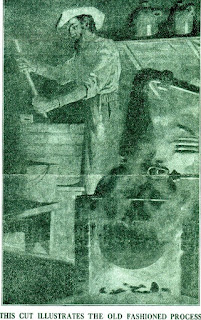 Despite the impressive size of his distillery, Herbst in his advertising featured workers using an “old fashioned process,” preparing the mash in a wooden tub.  His proof of the claim, he advertised, was a letter from Sam J. Roberts, the collector of whiskey revenue for the Seventh District.  Herbst had asked the official to attest that in his Frankfort distillery “small tubs are exclusively used.”  Without responding directly to the owner,  Roberts replied that the paperwork in his office indicated that the process “called for the use of seventy-one mash tubs, of which seventy are small and one large used as a cooler; the mode of mashing ‘by hand;’ the mode of fermenting ‘yeasting back, sour mash.”  Period. Roberts signed off without really confirming Herbst, who still found his reply good enough to run in an advertisement that contained the illustration here. 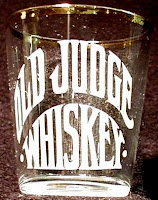 With his distillery running full out, the Milwaukee entrepreneur featured at least five brands, among them “Benson Creek,”  “Old John,” “Clifton Springs,” and “Old Judge,” the last a brand purchased with the distillery.  Herbst’s flagship, needless to say, was Old Fitzgerald, bottled as both bourbon and rye.  It was sold over the counter in quart and flask sizes bearing a highly recognized label.  Old Fitzgerald found a ready audience on steamships, trains, and high class “gentleman’s” clubs. To help distribute these whiskeys from a central location Herbst opened an office in Chicago in 1901 and maintained it for a dozen years.

As his reputation for success in business grew in Milwaukee, Herbst expanded into other fields. In 1904 as S. Charles Herbst, he became an investor, incorporator and vice president of the Milwaukee Investment Company, a local financial institution.  Later, He help found the Citizens Trust Company with assets of more than $3 million.   With his family he moved from the downtown fringe of Milwaukee to a house on at 3015 Shepard Street in the more fashionable Upper East Side, adjacent to Lake Michigan.  It is shown below. 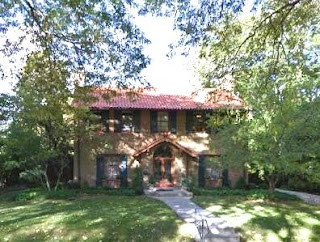 With no sons to succeed him, even as he aged Solomon continued to manage his major whiskey distilling and distribution businesses.  He was well into his seventies when National Prohibition caused the shut-down of both his Kentucky distillery and Milwaukee liquor dealership.  Herbst sold the rights to Old Fitzgerald to W.L. Weller for “medicinal  whiskey” during the “dry” 14 years, thus keeping the brand name alive and recognized by the drinking public.  After Repeal it became the lead label of the Stitzel-Weller distillery when “Pappy” Van Winkle and others in 1934 reorganized the Frankfort area plant.  [See my post on Van Winkle, November 2014.] 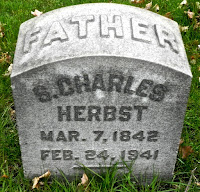 As he aged Herbst must have had many a quiet chuckle as he saw the fictitious origin story he had concocted being repeated again and again.  Late in his life he is said to have revealed that naming a brand for the tippling Fitzgerald was a wickedly funny insider joke.  This Solomon lived to be 98, dying in February 1941.  As his three daughters and their families looked on, Herbst was given a funeral of the Masonic orders at his Shepard Street home and buried in Milwaukee’s Greenwood Cemetery beside his wife, Emma, who had preceded him in death by 31 years. 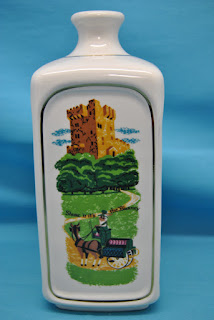 Note:  The story Solomon Herbst had concocted about John E. Fitzgerald, as a famous distiller, rolled on for decades.  I have a 2001 book on bourbon that repeats the myth.  Well-known bottle authority,  Chuck Cowdery, using evidence he says surfaced a decade earlier, in 2011 wrote an expose’ of Herbst’s story that now is generally accepted as the truth behind the naming of Old Fitzgerald.  The last image here is of a post-Pro Old Fitzgerald milk glass decanter featuring a famous Irish castle.  The legend says, :”Shure’n it’s the Blarney.”  “Blarney” aptly describes Herbst’s story about the origins of the Old Fitzgerald name.

Posted by Jack Sullivan at 6:12 AM