Abraham Keller and Whiskey for the Ages

Credited with being among the first Kentucky distillers, the names of Evan Williams and Elijah Craig have continued to grace bourbon bottles down to this very day.  The name of Abraham Keller, another Kentucky distilling pioneer, was seen on whiskey labels for eighty years but the brand, sadly, was swept away by National Prohibition, with only token remembrance today.

Records indicate that Keller was born on May 4, 1809, in Pennsylvania and as a youngster brought with his family to Kentucky.  His father, also Abraham, may have started a small distillery there.  The young Abraham, first came to public notice in 1840 when he bought a property in Harrison County located about one mile southwest of Cynthiana, Kentucky, on the South Fork of the Licking River. 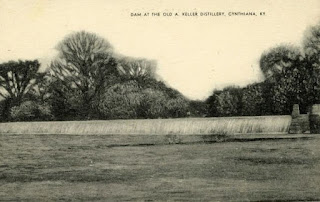 A man named Lamb previously had owned the property and placed a dam on the South Licking in order to turn a water wheel to provide power for a flour mill he operated. The dam is shown right.  Lamb was grinding flour and cornmeal, hauling it to nearby Maysville and shipping by flatboat to New Orleans.  Apparently uninterested pursuing that trade, Keller converted the flour mill into a distillery.   Taking as a partner a member of the Shawhan distilling family, Keller produced a whiskey under the brand name “Old A. Keller.”  Below is a later, highly imaginative drawing of what Keller’s early distillery might have looked like. 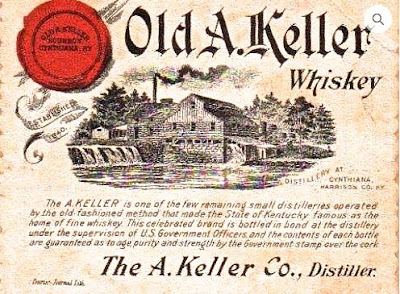 For the next twenty years, Keller watched as the quality of his whiskey brought it attention throughout Northeastern Kentucky and beyond.  The profits were important to feed and cloth his rapidly growing family.  In 1832, at the age of 23 Abraham had married Polly Ann Miller, the daughter of Hugh and Mary (Ewalt) Miller.  The couple would go on to have ten living children.  To house this growing brood, Abraham bought 169 acres of good farm land located at the intersection of Cynthiana and Lair’s Road where he built a large house.  Polly named it “Pleasant Home.”

After two decades of successful distilling, Keller sold the property in 1861.  He may have been prompted by the war clouds gathering on the horizon.  Indeed, Cynthiana was the site for the two battles during the Civil War, one of them at a bridge that Keller had built over the South Licking.  There members of the 171st Ohio Infantry fought a force led by Brig. Gen. John H. Morgan, who headed a cavalry troop known as “Morgan’s Raiders.”  They captured about 1,300 Yankee prisoners but were forced to release them when the Union Army sent reinforcements and caused the Confederates to retreat.  The engagement, became known as the Battle of Keller’s Bridge. Keller sold his distillery to J. A. Cook who ran the facility for the next five years, maintaining the A. Keller brand.  Shown here is a photo of the distillery as it  looked at the time.  In 1863, Cook sold a half interest in the facility to Thomas A. Ashbrook, changing the company name to Cook & Ashbrook.  When Cook died in 1873, his share was bought by Ashbrook’s sons, Felix G. and Samuel J. The Ashbrooks recognized the “celebrated” reputation of the A. Keller brand and advertised as above.

When Thomas Ashbrook died, his sons took over running the distillery.  By the mid-1880s the plant was mashing 160 bushels a day and had a bonded warehouse capable of aging 3,000 barrels.  Operating it as The A. Keller Company, Distiller, the brothers sold several brands nationwide bearing the founder’s name.  They included “Old A. Keller,” “Keller’s 67,” “Keller’s Imperial” and “Keller’s Superior” bourbon and rye.  Two examples of Keller labeled glass bottles, quart and flask size, are shown here.

The Wine and Spirits Journal in 1891 noted that: “Cynthiana is the birth-place of old “A. Keller,” one of the most widely-known and easiest-selling brands coming from Kentucky to New York and Boston and in the East.”  The trade publication further explained that the major East Coast distributor for the brand for many years had been and was continuing to be the highly capable P.W. Engs & Sons. [See my post on Engs, Jan. , 2017.] 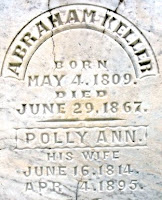 In 1884 Felix Ashbrook died and was interred in Cythiania’s Battlefield Cemetery.  In the same burying grounds in Section G, Lot 8, lay Abraham Keller who had passed in 1867.  The Keller family erected a large plinth to mark the site.  It carried a plaque memorializing him and his wife Polly who joined him there in 1895.

Despite the death of his father and brother, Samuel Ashbrook continued to expand the A. Keller Distillery, erecting a new warehouse with capacity for 12,000 barrels of whiskey.  The new building shows up in another idealized depiction of the Cythiana facility that can be dated from after 1897, the year of the Bottle-in-Bond Act because of the designation that the warehouse was bonded.  In 1902 under pressure from the Kentucky Distilleries & Warehouse Co., e.g. the Whiskey Trust,  Ashbrook sold out to the conglomerate. 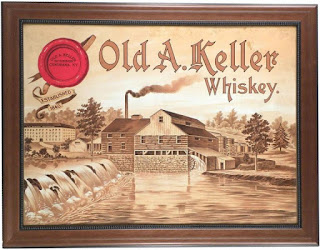 Recognizing the marketing power of the brand name, Trust executives continued to market A. Keller whiskeys.  By 1910 they had expanded the distillery to increase mashing capacity to about 450 bushels per day and warehouse capacity to well over 30,000 barrels.  A photograph here exists from that time that provided a  realistic look at the facility.  The automobile visible in the picture dates it from the late 1910s. 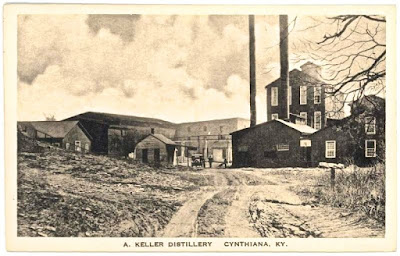 Although the Trust continued to market the Keller brand, the name of the distillery was changed at least once more to the G. G. White Distillery.   White was a former clerk in a Bourbon County distillery who received an inheritance of several thousand dollars when the owner died.  He began to invest in whiskey-making properties and subsequently allied himself with the Trust, who put him in charge of the Cynthiana facility.  The plant operated until the advent of National Prohibition and closed.. 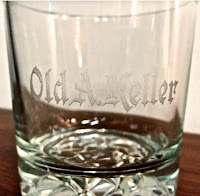 That ended an eighty-year run for the distillery that Abraham Keller founded in 1840 and the effective termination of the Keller brand name.   While Evan Williams and Elijah Craig continue to be remembered because of the whiskeys that bear their name, Abraham Keller, equally a pioneer Kentucky distiller, remains in obscurity.  Except, however, in Cynthiana where one can buy what is described as a “unique  bourbon (or whiskey, depending on what your drinkin’)” shot glass inscribed  "Old A. Keller."   Etched by a local craftsman, the glass memento includes a “keepsake” card that tells the history of the distillery.  Sold in packs of four, a single Keller shot glass costs $18.00.

Note:  Some information for this post on Keller came from the book, “Bourbon in Kentucky, A History of Distilleries in Kentucky”  by Chester Zoeller, published in 2010 by Butler Books, Louisville.

Posted by Jack Sullivan at 5:49 AM