Adolph Schwarz: A Wealthy Patron Was No Guarantee

Most immigrants to these shores in the 1800s arrived with few if any dollars in their pockets and no wealthy relatives to welcome them.  When Adolph Schwarz arrived from what was then Bohemia, awaiting him was his cousin, a wealthy and well-placed New York City lawyer.  That connection, however, did not shield Schwarz from the vagaries of the liquor trade in America. 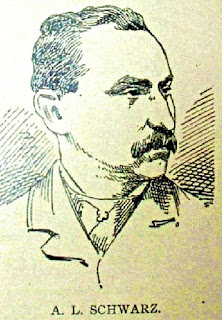 Schwarz, shown here in a newspaper illustration, was born in 1847, a cousin to Samuel D. Sewards, a prominent New York attorney.  Sewards was particularly active in German-American circles, the president of two elementary schools in Manhattan devoted to the education of German-speaking children not able to attend public schools because of their lack of English.   For some time Sewards had urged Schwarz to come to the U.S. and when Adolph reached the age when he could travel alone across the Atlantic, he came.

Using his contacts, Sewards secured a place for his cousin in the house of a dry goods company, a job Schwarz reportedly found tedious.  He stuck at it for a number of years, saving his money and achieving a level of economic independence.  Thoroughly sick of dry goods, and perhaps seeking some distance from Sewards, he left New York City about 1867 for Patterson, New Jersey.  That city was booming with dozens of mill buildings, and firearms, silk, and railroad locomotive manufacturing industries that had attracted tens of thousands of immigrant workers.  They in turn had spawned dozens of saloons.

Schwarz almost immediately joined the firm of Ledner & Steppen, a newly-established house in the wholesale and retail wine and liquor business.  When that partnership dissolved sometime later, Adolph stayed with one of the partners for several more years, until he had saved a substantial sum and earned the respect of potential clientele in Patterson.  Then he went into the liquor trade on his own account, locating his establishment at the corner of Straight and Mechanic Streets.

His wholesale liquor business seems to have been successful from the start. It resulted in his issuing a number of liquor containers, varying in size from half gallon to gallon jugs and glass bottles from half-pints to quarts.  Examples are shown throughout this post.  Schwarz proprietary brands included “Old Family Rye,” “Canoe Club Whiskey,” and “Forest Club.”   He never bothered to trademark any of them. 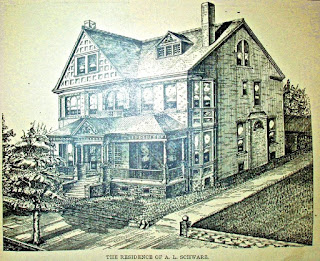 Meanwhile, Adolp was having a personal life.  About 1876 he wed Bertha, like himself, an immigrant, having been born in Prussia.  He was about 26 at the time of their marriage, Bertha was 22.  The 1880 census found the couple living in Patterson with their daughter, Isabelle, known as “Belle,” who was five.  Later Schwarz would commission a noted local architect, F. W. Rumpf, to design an elegant residence for the family, shown here.

So robust was his trade that Schwarz decided to establish two branch outlets, one on the corner of Man and Water Streets and the other at 96 Broadway.  He had not, however, reckoned on the vagaries of the U.S. economy.  The panic of 1873 was a severe nationwide economic depression that lasted until 1877.  Patterson’s industries laid off hundreds of workers.  Business at local saloons dropped off precipitously and along with it Schwarz’s sales of liquor.  He was forced to close the two branches and confine himself to his original location.  As the economy improved into the 1880s, his business rebounded and he moved to single larger quarters at 99 Main Street, occupying an entire building.

Schwarz also had noted an increased demand for domestic wine. In order to satisfy customer requirements he made arrangements directly with growers in Ohio, Missouri and California for shipments of product.  His ad for champagne claimed that “Mrs. Langtry Drinks our Wines.”  The reference is to Lily Langtry, the English actress, a subject of much public attention, who made several tours of the United States, undoubtedly tasting domestic wines along the way.

In 1881 Schwarz had a carload of wine shipped from St. Louis that was shunted onto a siding and forgotten.  The wine spoiled with a consequent major financial loss to Schwarz.  One observer wrote:  “But, undaunted, he sent another order which turned out in a much more satisfactory manner, and led to the success which is attending him today.  He is at present the proprietor of one of the largest establishments in this city and is agent for four of the largest distilleries in the United States.” 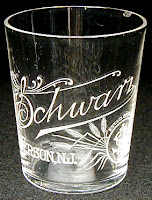 Meanwhile Adolph was diversifying his enterprises, becoming a prime investor in the Paterson Plastic Company and other businesses in New Jersey.  He also conducted a busy social life, with active memberships in the Masons, Old Fellows, Knights of Pythias and several German-oriented societies.  Now a citizen, Schwarz, it was said, “has been importuned on more than one occasion to accept the nomination for public office, but has alway declined.”

Unfortunately, Adolph Schwarz died before his full potential could be achieved.  It occurred on February 27, in either 1896 or 1897.  Both years have been recorded.  At that time he would have been about fifty years old.  Because Schwarz died intestate, it may indicate that his death came suddenly and unexpectedly.  He was buried in the Mount Nebo Cemetery at Totowa, New Jersey. 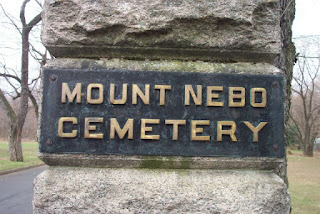 The wholesale liquor firm Schwarz had founded continued on without him for a few years, now under the management of his son-in-law, Isaac Basch, married to Adolph’s daughter, Belle.  In 1897 Basch incorporated the business, keeping the respected Schwarz name.  Under that regime, the company continued to be listed in Patterson directories until Basch died about 1919 and the company and its brands with him. 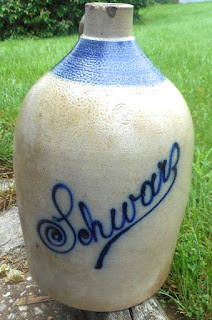 Note:  Much of the information for this article and Schwarz’s likeness and that of his home came from an unsigned, undated article in a Patterson newspaper found on the Internet at the New Jersey Bottle Forum.  The Forum author speculates that Schwarz “...was maybe the most prolific bottler of whiskey and spirits that Patterson has ever known.”