Foreword:   This is the sixth in a series of posts that examines the activities of whiskey men who previously have been profiled on the blog, grouping them for analysis under various headings.  In this case the common thread in each man’s story was an interest in natural history.  In some instances the individual collected items that were of museum quality and interest.  In others, the collections were meant to enhance the interior of a saloon. 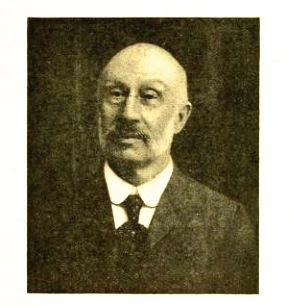 Butterflies and Booze:  In 1906, Edward Louis Graef gifted the Brooklyn Institute of Arts and Sciences with two examples of the rare butterfly shown above.  It is called the “Morpho Hecuba,” perhaps because the differences between the butterfly underside, left, and its top.   Over his lifetime Graef, shown right, would donate some 10,000 individual butterflies and moths, representing 80 species, to the museum.  All the while he was distinguishing himself in the New York business world as a successful liquor dealer.

While still a teenager, Graef became interested in insects and began amassing a collection.  Like many amateur entomologists of the time, he largely confined his acquisitions to butterflies and moths, known to scientists as “Lepidoptera.”  As he matured, he befriended likeminded collectors and professional lepidopterists.  With one of them he would found the Brooklyn Entomological Society. 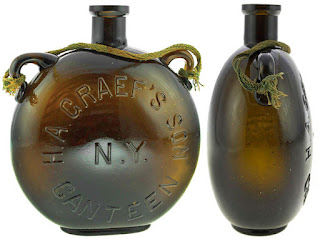 Even before he reached 18 Graef was tasked with earning a living.  With an older brother he began a liquor business on a busy commercial avenue in downtown Brooklyn.  Later, needing more space, he moved the operation a four-story building that provided considerable room for storing whiskey and wine.  He bottled his products in canteen shaped glass bottles containing embossing of his company name, “H. Graef’s Son.” 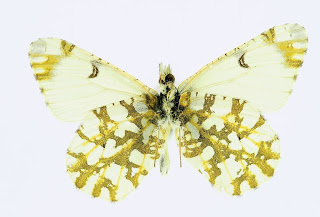 Graef’s collection, one that included insects from the United States as well as from overseas grew to more than 10,000 individuals.  Apparently because they were a distraction from his aggressively pursuing his liquor trade, in 1900 he donated the entirety to the Brooklyn Museum.  Among the specimens was the strikingly attractive moth, “Anthoscharis Ausonides,” shown above.  With the whiskey man’s gift and other donations and purchases, the museum gained recognition for the largest Lepidoptera collection in the U.S.  In recognition of Graef’ s contribution he was appointed honorary curator at the Museum and elected a patron of the Brooklyn Institute of Arts and Scientists. 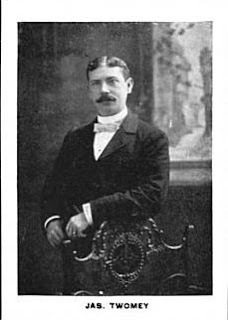 Rocks of the Yellowstone.  San Francisco’s Yellowstone Saloon was in danger of closing.  Previous owners had bailed out.  Then the place caught fire and although the flames were quickly extinguished, the interior suffered damage, including some loss of stock and fixtures.  Enter James Twomey and Vincent Mihalovich.  Twomey, shown right, was a 36-year-old Irish immigrant.  Mihalovich was two years older and an immigrant from Montenegro. 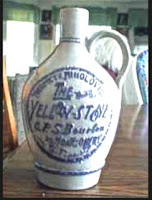 Together they set out to build a new reputation for the Yellowstone Saloon.  One aspect was to sell their proprietary whiskey in attractive jugs, as shown here.  Another was to open a museum devoted to rocks.  According to one commentator, the saloon held “…one of the most varied and interesting collections of minerals to be found in the state.” 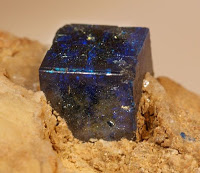 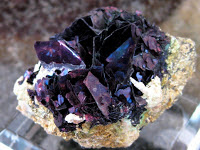 The display included nuggets of gold, silver, copper, antimony, lead, tin, quicksilver, nickel and cobalt as well as “rare ores” such as covelite, shown left, and boleite, shown right.  Assembled over a number of years, the collection also featured semi-precious stones such as opals, agates, topaz, and quartz.

The Yellowstone Saloon minerals exhibit was reputed to be “a great attraction to visitors,” even those not interested in mining.  Twomey and Mihalovich welcomed questions about the items and, it was said “all information is freely and cheerfully furnished.”  It probably did not hurt to buy a drink first at the bar.  Unknown is the fate of the Yellowstone’s mineral collection after the saloon was closed by National Prohibition in 1920. 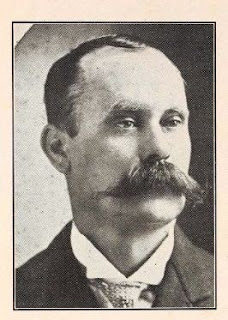 Seashells Along the Bar:  Charlie Rugers, shown left, inherited management of a  Houston, Texas, saloon and liquor dealership from his father when he was barely out of his teens.  A contemporary biography said of Rugers:  “He has had a ‘rough road’ to travel on the highway of life, but out of it he stands today strong and robust.”  After his father died, Rugers soon changed the name of the establishment to his own, the name to be found on the embossing of his whiskey flasks.

Rugers also was aware of the riches of seashells that regularly were washed ashore near Houston, a trove that propelled many locals into collecting.  The Houston Chronicle opined:  “You don’ have to go far to collect sea shells, they have washed up all over town…They’re everywhere…Some people are so passionate that they display them like works of art.”  Charlie used his collection to decorate his saloon.

The bar can be seen in a somewhat fuzzy newspaper photo above.  A sharp eye can make out starfish, conchs, scallops and other seaside flotsam.   Rugers' effort to distinguished his watering hole from others by a display of shells appears to have been effective.  An 1894 Houston business directory advised visitors to the city to pay a call at Rugers' saloon, calling it “particularly striking and remarkable” for its decoration of “sea shells and marine curiosities.”  Tourists were further advised that as they contemplated the wonders of this maritime tableau:  “They will be able to refresh the inner man with good stuff, which cheers but need not inebriate.” 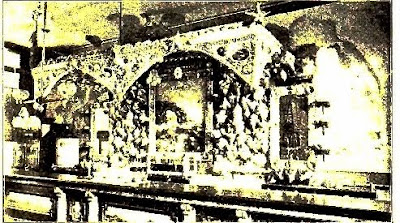 Inebriation, however, was high on the mind of some Texas prohibitionists who were a force in state politics even before the Civil War.  By 1895 fifty-three of 239 counties were dry and another seventy-nine partially dry under local option.  In 1919 Texas voters approved a statewide prohibition law.  Charlie Rugers was forced to shut down his saloon and liquor sales.  He never saw Repeal, dying in May 1828.  The fate of his shell collection is unknown.

“A Historic Legacy”:  In Green Bay, Wisconsin, a town 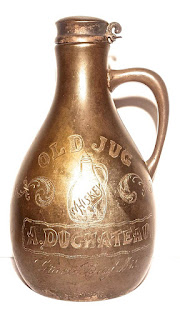 known for its football team rather than natural history, Frank John Baptiste Duchateau, who had inherited a thriving liquor dealership from his father, used his riches to amass a collection of Native American and other early artifacts that became the basis of the city’s history and science museum.   The local newspaper called Duchateau’s gift to Green Bay “a historic legacy.”

Although Duchateau, shown here, was successful in the liquor trade and other pursuits, including five elections as city alderman and a member of many Green Bay social and service organizations, his real passion was for archeology.  Described in the press as “one of Wisconsin’s most ambitious collectors,” he amassed an assemblage of Native American archeological items as well as early farm tools, ceramics, firearms, kitchen utensils and foreign currency.   Among the rarest of those was a wooden mortar and pestle used by the Menominee Indians to crush corn, akin to the item shown here.

Not content with buying vintage artifacts, Duchateau often found rare objects on his own.   While exploring at Point Au Sable near Green Bay, for example, he came upon a brass sundial made in Paris centuries earlier.  It carried the longitude and latitude of many of the cities of an earlier age and is considered extremely rare.

In 1915 Duchateau helped found the Neville Museum of Natural History of Brown County, located in Green Bay.  Over his lifetime he gave an estimated 12,000 items to the museum.  He also donated the first display cases and served as  vice president of the museum board, a post he held until 1929.  Living to be 87 years old he witnessed the growth of the Neville Museum, one that continuously garners plaudits from visitors like this:  “Their permanent exhibit about the history of the area is truly remarkable and can be enjoyed by folks of all ages.”  Thus does the legacy of Frank Duchateau, whiskey man, live on.