Whiskey Men and the Gunslingers

Foreword:  Whiskey and the American West have been inextricably intertwined in both history and myth.   Saloon scenes seem to be a requirement for any motion picture depicting the “Old West” and are a favorite location for shootouts.  As exaggerated as such depictions may be, gunslingers did exist and whiskey men had to deal with them.  As the four saloonkeepers featured here demonstrate, they chose a variety of strategies. 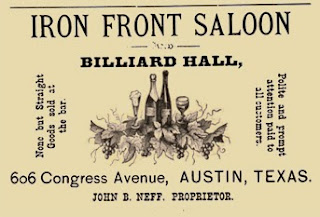 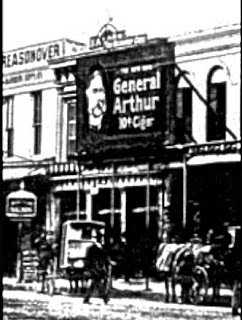 Austin’s Iron Front Saloon, shown right, has been recognized widely as one of the notable “watering holes” of the Old West.  Like other Texas saloons, it saw its share of violent encounters but was known for its gracious and well-liked owner, John B. Neff, a proprietor who was overshadowed in his own establishment, however, by the man who ran the gambling concession upstairs, the notoriously dangerous Ben Thompson. 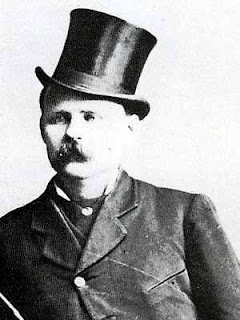 Thompson, shown left, was a gunfighter with a number of killings attributed to him, quick to anger and reach for his gun, especially when he had been drinking.  That Neff selected Thompson to operate the gaming room with its faro, monte, poker, dice and roulette tables, might have puzzled his customers, but the owner had good reason.  Thompson had reputation for running honest games, an oddity in Austin, and his prowess with a pistol kept things orderly .  As much as $30,000 month might pass over the tables — equivalent to a quarter million dollars today.  Shown here is the actual roulette wheel used by the gunslinger.

Unfortunately, Thompson could not avoid violence.  In 1881 he had gotten involved in a dispute with a saloon and hotel owner in San Antonio, shot and killed him.  Although it cost him his job as town marshal, he was tried and ultimately acquitted of murder and returned to Austin to continue to run the gambling at Neff’s Iron Front Saloon.  In 1884 he ventured back to San Antonio, was lured into an ambush, and met with a hail of bullets.  Shot in the head, Thompson died instantly.

The life of Ben Thompson has earned him considerable attention in subsequent years, including a long Wikipedia entry and many Internet photos.  Meanwhile, John Neff, the genial saloonkeeper, ironically has gone largely forgotten.  The bad men of the West unfortunately get far more publicity than the good guys. 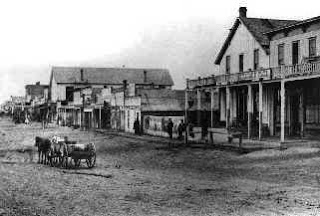 Known as among the wildest of Western towns, Dodge City, Kansas, shown here, had a reputation for frequent murders and casual justice.  A Kansas newspaper in the 1870s declared:  “…We have only room for one Dodge City; Dodge, a synonym for all that is wild, reckless and violent; Hell on the Plains.”  This milieu failed  to deter Henry Sturm, a German immigrant saloonkeeper and liquor dealer, who faced off in Dodge against formidable odds — a gun-toting gang led by Bat Masterson, shown below. 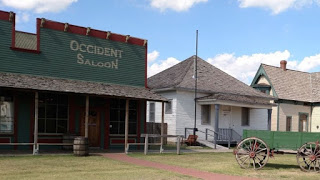 Sturm had arrived in Dodge City about 1876 to establish a wholesale and retail liquor store.  He prospered and a year after arriving bought the Occident Saloon.  It is shown above as reconstructed as part of an “Old Dodge” exhibit.  Sturm soon was heavily engaged with other business owners in efforts to tame Dodge City’s image as a lawless frontier town, involving him deeply in what became known as “The Saloon War of 1883.” 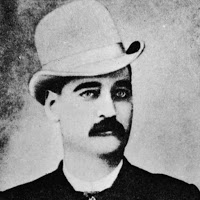 The conflict began when authorities banished from town Luke Short, the owner of the Long Branch Saloon.  Quick with a gun himself, Short was backed by gunslingers like Bat Masterson, described at the time as “one of the most dangerous men in the West.”  Repairing to Topeka, Kansas, Short and Masterson assembled a group of armed men with the purpose of returning to Dodge and reeking revenge. When the pair threaten to bring their rowdies to town, the local sheriff enlisted local guns. 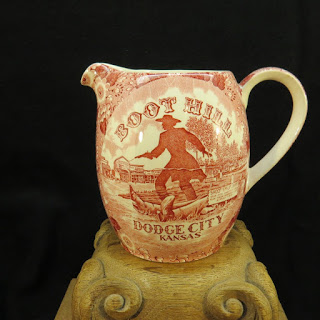 Sturm put himself on the line, signing an anti-gang telegram to a reluctant  Kansas governor, asking that state troops be deployed.  The message talked of the need in Dodge for “clearing out” the guntoting crowd.  It continued “This element has to be banished or else respectable people have to be bulldozed and browbeat by a class of men without any vested interest or visible means of support….”  High tension gripped Dodge City for days.  In the end issues were negotiated and no shots fired.  Masterson returned to town a year later where he opened a short-lived newspaper, seemingly devoted to justifying his position during the Saloon War. 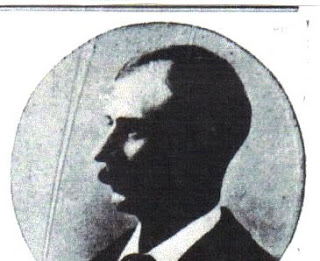 Jack Ryan took an entirely different approach to the outlaw element.  Not being able to beat them, he has been accused of having joined them.  After robbing a coal company payroll of $8,000 the notorious Butch Cassidy and the outlaw gang he headed known as the “Wild Bunch,” stopped in Ryan’s Home Ranch Saloon in Baggs, Wyoming, got drunk and shot up his bar.  As the story goes, Ryan stayed calm through the chaos and was rewarded with a silver dollar for every bullet hole found in his walls and ceiling. 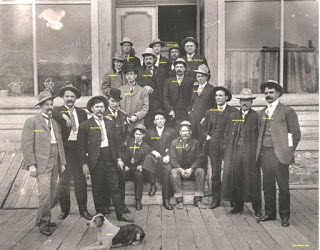 Moreover, Ryan was able to earn the confidence of Cassidy and the others as a reliable collaborator.  When he moved to Rawlings, Wyoming, the Wild Bunch followed.  Shown here is a photo from about 1889, showing the gang and Ryan posed in front of the saloon,  That is Cassidy in the bowler hat, standing fourth from the left.  Jack Ryan is standing on the steps above him, also wearing a bowler.  Mischief would follow. 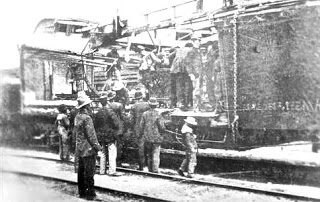 Subsequently two of the last great American train robberies occurred in Wyoming, one at Wilcox where the Wild Bunch got away with $30,000 (equivalent to $750,000 today) and a second near Tipton, Wyoming, when $50,000 in gold was taken.  Suspicion immediately fell on Ryan who was a former brakeman on the Union Pacific and presumably had inside knowledge of railroad operations.  Giving him the code name “Basket,” investigators opened a criminal history dossier on him. 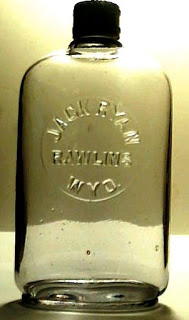 Nothing was ever proved, however, and Ryan continue to prosper as a saloon owner while detectives hunted down most of the train robbers.  The Wild Bunch became history, its members, including Butch Cassidy, shot dead or in prison.  Meanwhile, Ryan was expanding his business interests with large real estate holdings, oil rich lands, a productive stone quarry, and a horse ranch.  He became active in civic affairs and a co-founder of the local lodge of the Fraternal Order of Elks.  Any taint from Ryan’s association with outlaws seem to have been forgotten.  Of him a local newspaper editorialized:   “A man with diversified interests is J. P. Ryan and since his advent in Rawlins no effort has been spared by him for the advancement of the town’s best interests.”

For decades the men of the family of Ernest Schwethelm (pronounced “Sweet-helm”) were virtually synonymous with the famous Texas Rangers, lawmen whose mission was to bring law and order to the Lone Star State.  His father, Henry, was the captain of a ranger company tasked with patrolling the Texas hill country against cattle thieves.   Schwethelm, shown here at a ranger reunion, served with the organization before moving to Kerrville, a market town and county seat, where, with a partner, owned and operated saloons.  Among his drinking establishments were the Ranch Saloon, left, and the Favorite Saloon. Both were housed in sturdy Italianate style buildings and still stand in Kerrville. 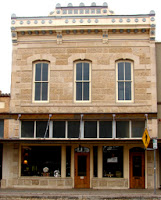 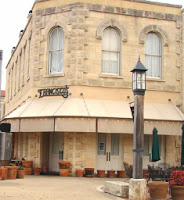 Despite Schwethelm’s background as a lawman, the Ranch Saloon had a reputation for being a rowdy place and reputedly the site of the murder of a Texas Ranger.  His name was Tom Carson, a man with a reputation for being tough, bad tempered and somewhat mysterious.  Although details about the event and his assailant are sketchy, Carson reputedly was shot and killed in the Ranch Saloon in April 1893.

No such violence attached to Schwethelm’s Favorite Saloon.  While catering to the ranch hands who supplied the wool and fleece markets that operated in Kerrville, Ernest was rectifying liquor, blending whiskeys to achieve taste and color and selling the results via the post office and railroad express to the increasing number of “dry” counties around Texas.  He had progressed beyond pushing drinks over the bar into a commercial operation that sought a wider customer base.  In a word, the Wild West saloon was beginning to go Main Street. 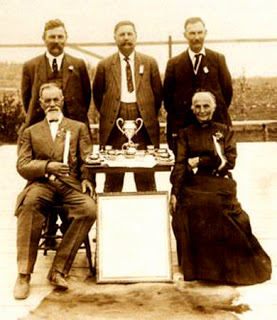 A photograph exists that epitomizes the changes at work in Texas. It is 1912.  Henry Schwethelm and his three sons, Texas Rangers all, who had known the perils of being lawmen when the state teemed with outlaw elements, are with wife and mother, Emilie, for a 50th wedding anniversary.  Ernest Schwethelm is standing center. The men are all dressed in suits and ties, flowers in their button holes, looking like Rotary Club businessmen.

Each of the four saloonkeepers featured here took a different strategy to dealing with armed and dangerous hombres --   from collaboration and tolerance to opposition and active law enforcement.  No matter their approach, a strong and inevitable march toward civilization was taming the West and ending the day of the gunslingers.

Posted by Jack Sullivan at 1:44 PM