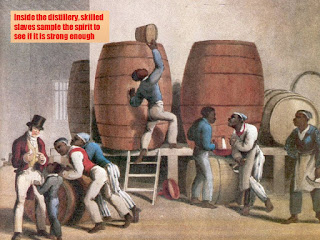 Foreword:  The recent revelation that Jack Daniels was taught how to make good bourbon by a slave has resulted in efforts by historians to research more thoroughly the role that enslaved blacks played in the development of the American whiskey industry.  According to one author, many distilleries in the Mountain South employed at least three slaves.  Presented here as part of the series grouping whiskey men into categories are four examples of distillers, both large and small, who manufactured whiskey with slave labor. 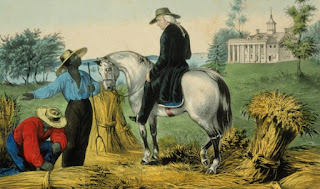 We begin with the Father of Our Country, George Washington.  Washington was a farmer at heart.  Upon returning to Mount Vernon after his presidency, he threw himself wholeheartedly into the agricultural activities of the plantation, including growing corn and rye wheat.  At the urging of his farm manager, James Anderson,  a Scotsman with experience making whiskey both in his homeland and in Virginia, Washington began commercial distilling.  Anderson had advised George that Mount Vernon’s crops, combined with his large gristmill and abundant water supply, would be a profitable venture.  Always looking for ways to make the estate pay off, Washington agreed.

As a result in 1897 the cooperage at Washington’s grist mill, 2.7 miles from the plantation house, was converted to distilling and two stills bought and put into operation.  Success came quickly and Anderson was able to convince Washington to increase production.  That fall construction began on a building large enough to hold five stills.  The foundation was laid from large rocks brought from the Falls of the Potomac where Washington was trying to build a canal.  The walls were of sandstone quarried right on the plantation itself.  George also invested heavily in the interior.  He bought five large copper kettles, 50 mash tubs, five work tubes and a boiler.  Shown below is an artist’s concept of the original complex.

The extensive, back-breaking labor involved in this project was provided almost entirely by slaves.  They constructed the distillery and then, under the guidance of Anderson’s son, were responsible for operating the machinery of the distilling process, as well as making the barrels for holding the finished product.  We know the names of those African slaves:   Hanson, Peter, Nat, Daniel, James and Timothy.  They made it possible for Washington between 1798 and 1799 to produce 11,000 gallons of whiskey, valued in that day at more than $7,000 (equivalent today to several hundred thousand dollars).  The distillery also made brandy using locally grown apples peaches and persimmons. 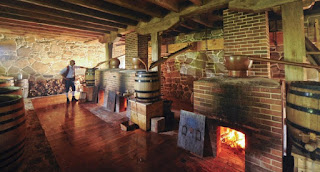 The success of Washingtons’s distillery was short-lived.  After his sudden death in 1799, the facility was closed and the buildings allowed to fall into disrepair, ultimately to be dismantled and the site obliterated.  Early in this century a multi-million dollar grant from the Distilled Spirits Council of America (DICUS) allowed the distillery as conceived and operated by Washington to be recreated on the original site and opened to the public in 2005.  True to the history, African-Americans are cast in the role of the distillery workers.

About the same time that Washington was distilling, Elijah Pepper, a native of Virginia, moved more than 500 miles west to Kentucky, settling near the town of Versailles, Woodford County, and about 1797 built a distillery, almost certainly with slave labor.  Census records for 1810 indicate that the Elijah owned nine enslaved blacks, some of whom worked in making whiskey as well doing as field labor.

With the success of his enterprise, Pepper over the next ten years was able to increase his slave holdings to twelve, seven males and five females.  Owning more hands for field work allowed Elijah to increase his land holdings to 350 acres. Over the next ten years he was able to buy even more slaves.  The 1830 census recorded him now with twenty-five, thirteen males and twelve females.  With the help of those blacks he steadily was increasing the production of his distillery. 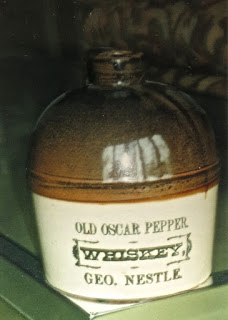 With his death in 1831 the distillery, its equipment, stored whiskey and the slaves devolved upon his widow, Sarah O’Bannon Pepper, who later sold her interest to her son, Oscar N. Pepper.  After buying out his siblings, Oscar, once again using slave labor, replaced the log structure of his father’s distillery to build a new facility, a one-and-a half story rectangular facility that allowed him to expanded whiskey production significantly.  Shown below is is an artist’s concept of the rebuilt Pepper distillery. 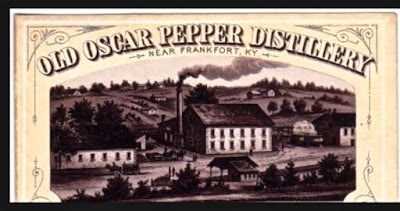 Oscar’s wealth included twelve male and eleven female slaves, some of them inherited from Elijah.  An 1859 Woodford County document recorded that two of his slave women had given birth in August, a girl christened Maria and a boy Willie.  Oscar Pepper is listed in the column for the father’s name.  My guess is that because slaves were considered property, not persons, Oscar’s name appears there as owner.  Three years later, with the outbreak of the Civil War and the Emancipation Proclamation, the slave era ended in Kentucky.  Nevertheless, the Peppers continued to operate the distillery until 1878 when the effects of a bankruptcy passed it to non-family ownership. 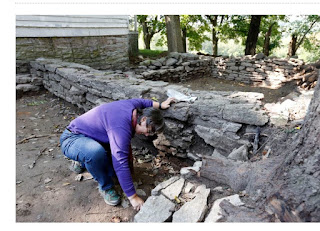 Today archeologists are attempting to reconstruct the Pepper distilling site.  The family home has been returned to its original state and outbuildings have been identified.  To date, however, efforts to find the location of the slave quarters have been unavailing.

To reach Arkansas, William Looney and his family were forced to endure a trek through much of Tennessee, bringing with them their young children and a few slaves.  Perhaps exhausted from the journey, they stopped in the far northeast of the state on the Eleven Point River where Looney settled on the west bank.  In contrast to the large landowners elsewhere in Arkansas, he was a yeoman farmer who also used several slaves to help him built and run a small distillery, likely similar to the scene shown below. 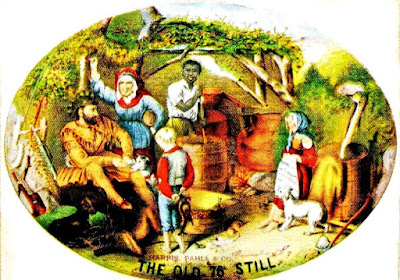 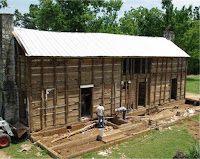 When compared to Washington and the Peppers, Looney was a small operator, prospering economically and socially by making and selling whiskey primarily to his neighbors.  Looney’s liquor warehouse and tavern, originally built with slave labor and shown here under restoration, is accounted the oldest commercial building in the state of Arkansas.

When Looney died in 1846 at about the age of 61, he was one of the richest men in Randolph County with extensive land holdings, owning thirteen slaves and considerable livestock.  Moreover, he had been sought out for public office.  During a period from about 1816 to 1825, he served as justice of the peace and magistrate in two local townships. 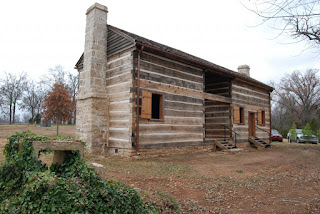 Similar good fortune acceded to Looney’s tavern.  After his death his widow converted the building to a dwelling. Later it was donated to a local college. In recent years the structure has been restored as a tavern by a grant from the Arkansas Natural and Cultural Resources Council.  On the National Register of Historical Places,  Looney Tavern has become an important tourist destination in Northeast Arkansas.  The role of slaves in its original construction, however, does not appear to have been highlighted. 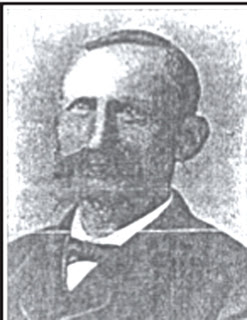 Like Looney, Levi Price, shown here, was a farmer/distiller whose output of whiskey was modest, meant largely for local consumption.  He launched himself in business in Frederick County, Maryland, when he was only 23 and reputedly had only 93 cents to his name.  His early financial success apparently resulted in innovations he made in the distilling process.  He recognized that any form of adulteration led to objectionable tastes in the newly made “raw” whiskey of his day.  Using care in the cleanliness of his process and a reputed “secret method” or two, he was able to manufacture a product that had the taste and smoothness of an aged whiskey while being newly distilled.  By eliminating most of the aging process, he saved money and was able to sell his whiskey for less than the competition.

In all these efforts, Price had the help of slaves and later freed blacks.  They assisted with the distilling process, made barrels, and rolled them out to the wagons of customers.  Shown here is the Price house in the process of its second restoration as an historical residence. Behind the house can be seen a field stone building that has been identified as slave quarters. 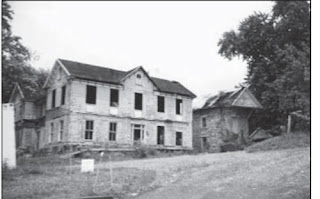 Maryland dragged its feet on antislavery measures.  The state failed to act until 1864 when it conducted a emancipation referendum that only narrowly passed.  The vote tipped only after the absentee ballots of local soldiers in the Union army were counted.  Freedom day for enslaved blacks in Maryland came on November 1, 1864. The change seems not to have bothered Price who continued to prosper.  After his death the quality of his whiskey was recognized in a brand of rye issued under his name.

These four examples of whiskey men with slaves could be multiplied dozens of times.  Likely most distillery operations in the Mountain or Deep South employed African and Native American slaves in the pre-Civil War era.  Renewed interest in the role they played in the development of the U.S. liquor industry should, I believe, lead to a greater understanding and appreciation of their contributions. 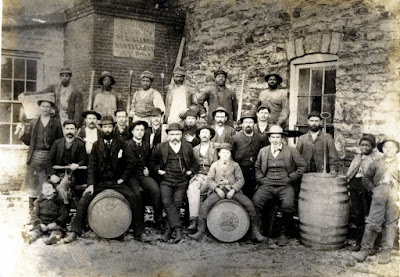 Afterword: After posting this article I came across a picture that indicates the participation of American blacks in distilling.  Above is a photo of the first meeting of the Kentucky Distilling Association in 1880.  Gathered are many of the top distillers in the state.  Note the number of African-Americans included in the group.

Posted by Jack Sullivan at 5:31 AM