Cleveland’s Loews: From Bitters to Beer to Bevo 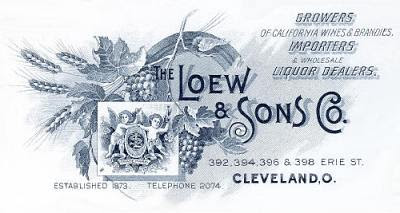 Although many whiskey men right up to the end dismissed the threat posed by prohibitionists, the Loew family of Cleveland, in the liquor trade for at least 38 years, closed out that business in 1912, four years before Ohio went “dry.” But the new enterprise they chose would prove almost as vulnerable to prohibition — manufacturing equipment for breweries.

The liquor house president and founder was John A. Loew.  He is credited with creating the firm in 1873, apparently as an adjunct to his saloon at 63 Willey Street.  As his sons Daniel and Charles matured he took them into the business and about 1883 called it J. A. Loew & Sons.  Daniel was vice president;  Charles was secretary.  At that time the company was located at 677 Lorain Road. 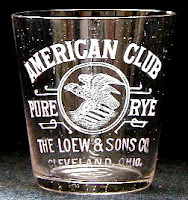 The company featured two proprietary brands, “American Club Rye” and its best seller, “Dr. Loew’s Celebrated Stomach Bitters,” the latter so named despite there being no evidence that any of the Loews had a medical degree.   Advertised as a “nerve tonic,” and sometimes as an “aromatic tonic,”  these stomach bitters were thirty percent alcohol, 60 proof, considerably stronger than a fortified wine. 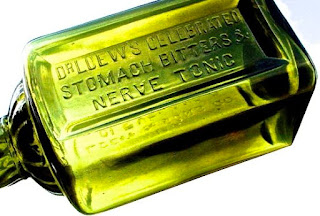 Dr. Loew’s bitters featured an elaborate label of a individual riding a winged horse stabbing a lion with a long lance.   Beneath the label was a square bottle embossed with the the Loew name and other advertising.  Found in four different sizes, the bottles came in clear glass and several shades of olive. Dr. Loew’s  bottles are a favorite with bitters collectors. 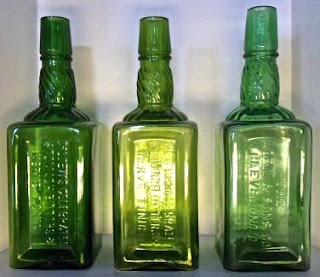 The Loew company grew rapidly, moving to Woodland Avenue before settling at 392-398 Erie Street in a large three-story building, shown below in an artist’s rendering.   About the same time the Loews took a new partner named Fred Bomonti who became a vice president. 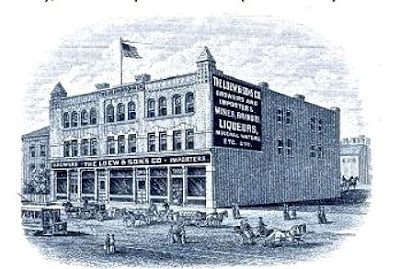 After at least 22 years at the helm of his liquor business, John Loew retired and died in January of 1897 at the age of 63. His mausoleum plaque is shown here. His sons continued the business, Charles became president and Daniel the secretary-treasurer.  They changed the name to The Loew & Sons Company, as shown above on a letterhead.  After 1903 they also moved their operations to several addresses on Cleveland’s Prospect Avenue.

The liquor company remained in business until 1912 when it disappeared from city directories to be followed by the Loews’ brewery equipment company.  My guess is that pressures from prohibitionary forces in Ohio as well as heat from Food and Drug Act enforcement agents caused the Loews to shut their liquor house doors.  The family appear to have sold the rights to their stomach bitters to Henry Christy, a Cleveland wholesale grocer who specialized in alcoholic products. [See my post on Christy, Jan. 2013.]  As shown here, Christy’s name appears on a Dr. Loew’s bottle shaped and colored identically to the original. 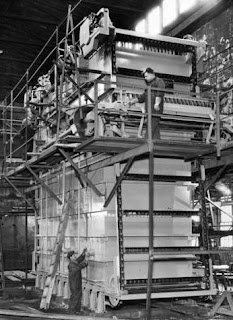 Almost immediately the family created the Loew Manufacturing Company, a supplier to the brewing industry. Two of its inventions for assisting the brewmaster were the Loew “Blitz-Blank” beer filter and the Loew “Magic” filtermass washer.  The firm also made larger machinery, including a beer pasteurizer looming five stories high and a bottle filler and capper, both shown here. 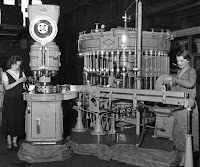 With the 1916 imposition of prohibition in Ohio, the state’s breweries shut down, depriving the Loews of its most robust business, but beer-makers in other states were still going strong and in need of equipment.  With the imposition of National Prohibition in 1920, the Loews simply shifted their attention to bottling equipment for non-alcoholic beverages, like “Bevo,” a soft drink offering from Anheuser-Busch. Note:  In the process of researching this vignette, I came across Ferd Meyer’s post on his Peachridge blog about the Loews’ bitters.  He features a number of excellent photos of the Dr. Loew's bitters bottles.  I have borrowed several for this article and thank him for them.

Posted by Jack Sullivan at 8:45 AM