Theodore Roosevelt and the Whiskey Men 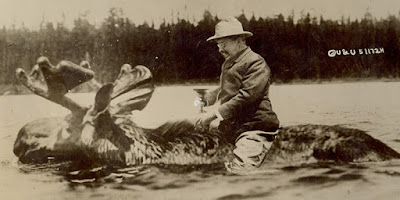 Foreword:   Having profiled the relationship of President Grover Cleveland with several  whiskey men, it seemed natural to follow up with another president, Theodore Roosevelt.  The photo above is a clear spoof.  Although “Teddy” as he was known, had formed the Bull Moose party in his second, unsuccessful, run for President, he never rode one, nor did he drink martinis.   Referenced here are three “whiskey men” whose lives, in varying ways, touched Roosevelt’s. 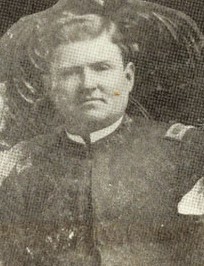 George Curry owed much of his career to his relationship with Roosevelt.  No figure looms larger in the early history of New Mexico than Curry, a transplant from Louisiana who was running a saloon in Lincoln Station NM, shown below,  when the Spanish American War broke out in 1898. The governor of New Mexico was authorized to raise four companies of cavalry.  Curry recruited one company and was appointed its captain. 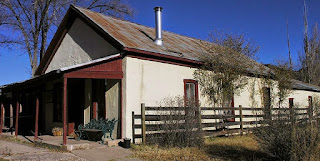 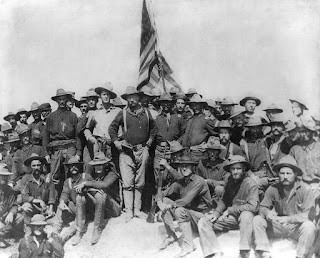 His troops, along with other Western recruits, composed the regiment commanded by Colonel Theodore Roosevelt that became known as the “Rough Riders.” shown here with their commander in the center  During the training Curry became a friend and confidant of Roosevelt but eventually was denied by the flip of a coin the chance to see action in Cuba and participate in the famous charge up San Juan Hill.  Instead he remained in the U.S. to provide logistical support to the Riders.

Almost immediately after the war, with Teddy’s backing, Curry volunteered to go to the Philippines to help put down a revolt by local rebels against American occupation following departure of the defeated Spanish.  His success during two years of combat led to his appointment as governor of several Philippine provinces and eventually as chief of police of Manila.  When now President Roosevelt was looking to appoint a governor for New Mexico, he chose Curry who is said to have accepted only upon Roosevelt’s promise to push for full statehood for the territory.

Although he had been a Democrat, Curry moved to Roosevelt’s Republican Party.  He proved to be an effective territorial governor of New Mexico and was able to see statehood achieved in1910, after years of struggle in which he played a major role.  Perhaps out of gratitude for his years of service the people of New Mexico elected Curry to the U.S. Congress where he served one term. 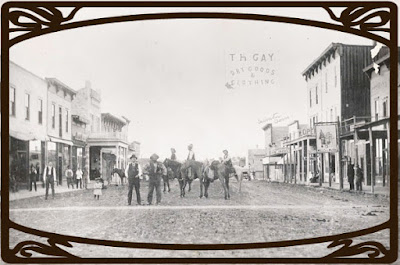 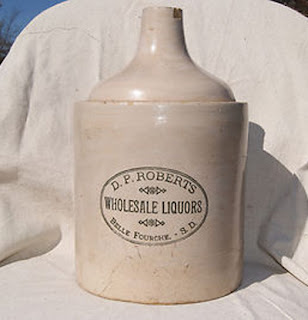 No sooner had the man known as “Devil Dan” Roberts opened his Stand Up Bar in Belle Fourche, South Dakota, shown above, than he was embarked on the trip of his life at the behest of President Roosevelt.  A colleague, Seth Bullock, had been a Rough Rider and had been befriended by Roosevelt. When Teddy was inaugurated as President in 1905 Bullock conceived the idea of having a cowboy section in the inaugural parade.  With Roosevelt’s enthusiastic approval, Bullock recruited 62 cowboys from around the West for the ride. Among them were five from Belle Fourche, including Dan Roberts and his son Henry, the youngest rider in the group. 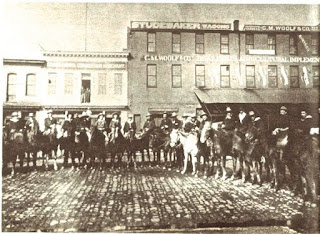 Shipping their horses by rail ahead of them, the cowboys, including future movie star Tom Mix, followed in their own railroad coaches, having a raucous time. In Washington, as shown here, Roberts and the others were reunited with their ponies and rode around streets of the Nation’s Capitol to exercise their mounts. For the parade, security agents allowed the riders to carry pistols in their holsters as part as their costume, but the guns were unloaded. Riding eight abreast in the parade, they were cheered lustily by the waiting crowds. As they passed the reviewing stand President Roosevelt is said to have jumped up, clapped his hands and shouted: "That's bully! That's excellent, Captain Bullock!” 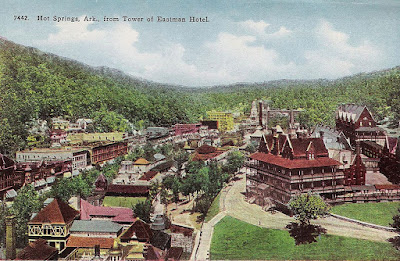 Excitement was running high in Hot Springs, Arkansas, on January 10, 1910, with the anticipated visit of former president, Theodore Roosevelt, for a ceremony and speech.  John Wesley Freeman, as a leading citizen, was among those planning the visit.  At Freeman’s Barrelhouse & Saloon a trio of soldiers from Fort Roots near Little Rock gathered, anticipating their role as honor guard in a reception committee.  Among them was Edward L. Haley, a Mississippian, described as “the most peaceable man in the company.”

When the soldiers got up to leave, Haley got into a dispute about the bill with bartender George Kilgore, a man with a violent temper.  When the soldier refused to pay the designated amount, Kilgore took a hand gun from behind the bar. In the argument that ensued, he shot and killed Haley.  Violence of this nature was not uncommon in Hot Springs. Ten years earlier Kilgore had shot and killed another man in Freeman’s saloon. 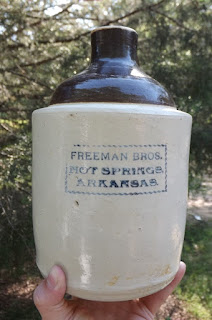 How Haley’s murder affected Freeman, a deputy sheriff, former postmaster, and leading town citizen, has gone unrecorded.  He had been a leader among those who had helped put Hot Springs on the map as highly desirable resort community where 47 "hot springs" gushed forth nearly a million gallons of 143 degree water every day.   By 1903 three Freeman saloons were operating simultaneously in Hot Springs to quench thirsts for something stronger than water.

Freeman undoubtedly was “front and center” to shake the former President’s hand when Roosevelt visited and was the the town’s honored guest.  The photo below shows Teddy during ceremonies at the fairgrounds, looking toward the military honor guard at left, standing at attention.  He may have known that it was missing one young soldier that day. 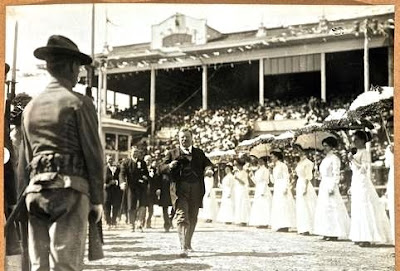 Posted by Jack Sullivan at 1:32 PM