When Albert M. Root and Andrew J. Midler, buddies from Syracuse, New York, came to a booming Saginaw,  Michigan, about 1863, they started a liquor business aimed at slaking the thirst of the lumbermen thronging the city.  Their success provided them with the wealth to own and operate the largest fleet of steamboats plying the busy Saginaw River. 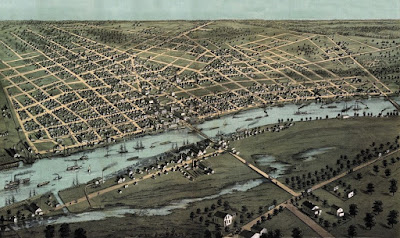 While the map of Saginaw in 1867 above may have exaggerated the amount of river traffic,  from the early days of steamboat navigation a regular river traffic of steamers ran between Saginaw and Bay City on Lake Michigan. It was lucrative business.   Root and Midler would find that maintaining their fleet, however, raised problems beyond those of running a whiskey business

Albert Root was born in Madison County in upstate New York about 1838.  At some point in his youth he gravitated to the nearby city of Syracuse where he met Andrew Midler, who was five years older.  The son of a local coal dealer, Midler had been born in Syracuse.  The 1860 census found him working as a contractor.  How the partners came together is unknown but Root likely had some experience working in a liquor house. 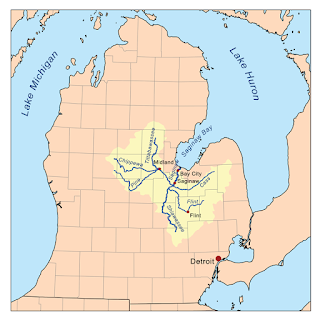 Seeking better opportunities than Syracuse provided, the partners looked westward and decided that the nationwide strong demand for lumber during the Civil War and the virgin pine forests of northern Michigan would create a boom town.  As trees were felled, the logs were float down tributaries to the Saginaw River, then to the multiple sawmills located in Saginaw.   The industry brought crowds of hard drinking men to the Michigan town. 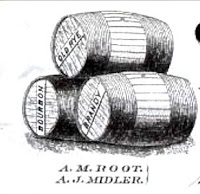 In 1863, the pair pulled up stakes in Syracuse and headed for the Michigan wilderness.  Midler apparently was a lifelong bachelor but Root had married a New Yorker named Lucia about 1857 and they had a six-year-old girl at the time of the move.  Upon arrival, the partners wasted little time in establishing their wholesale and retail liquor and tobacco trade in a building at 121 Water Street, located at the foot of a bridge connecting Saginaw with East Saginaw.  From their storefront Root and Midler could see the constant movement of ships up and down the river, many of them built in Saginaw shipyards.

Over the next nine years as the firm of Root & Midler prospered, their wealth propelled them into shipping.  In 1872 the firm purchased the steamer L.G. Mason and the following year the Daniel Ball. The latter was a well-known vessel for having occasioned a 1871 U.S. Supreme Court decision.  A passenger ship, the Daniel Ball was specifically designed for the forty-mile river route it earlier had traveled on the Grand River between Grand Rapids, Michigan, to Grand Haven at the mouth of Lake Michigan.  Designed with a draft of only two feet, the steamboat was not considered capable of plying the Great Lakes.  Because the ship was never licensed or inspected for safety as required by U.S. law, the federal government took the owners to court.  The district court dismissed the suit, the feds appealed and a circuit court reversed the decision, a judgment upheld by the U.S. Supreme Court.  The Daniel Ball became licensed.

The partners’ final purchase was the Cora Locke, a side-wheeler used as an auxiliary ship on weekends when traveler demand was heavy.   As a result of their fleet, Root and Midler largely controlled the passenger business between Saginaw and Bay City, a monopoly the firm succeeded in maintaining for fifteen years.  Over time the they rebuilt entirely the L.G. Mason.  It was said to emerge “as fresh as a daisy” and remained a favorite river craft for many years, setting a record for Saginaw River trips. 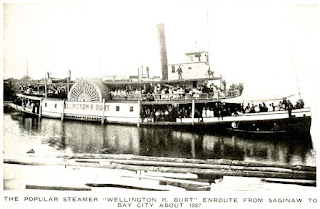 Not everything on the waters went well.  In October 1876 the Daniel Ball caught fire while on the way down river and was run ashore.  The passengers escaped unhurt but the aging craft burned to the water’s edge and sank, a total lost.  Undaunted, Root and Midler commissioned a new steamer from a regional shipyard.  Launched in 1877, the ship was christened the Wellington R. Burt, named for a wealthy local lumberman.  A side-wheeler weighing in a 252 tons, the Burt, shown here, was licensed to carry 500 people.  A popular stop was Lookout Point Harbor near Bay City, below. 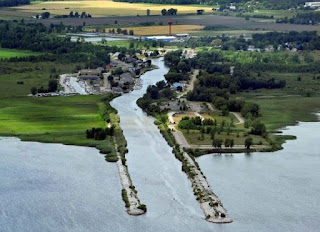 Although the Wellington R. Burt was said to be “a well patronized and popular boat” on the Saginaw River, it was the occasion of Root & Midler Co. being sued in 1885.  Apparently the custom of passengers was to jump on the boat as it approached the dock.  When a 48-year old Ms. Clinton made her jump to the gangway, she fell, broke her leg and sued the steamboat owners for negligence, asking damages.  After a lower court dismissed the suit, she appealed to the Michigan Supreme Court.  That body ruled in her favor, indicating that officers had not taken reasonable precautions against “an obvious frequent danger.” 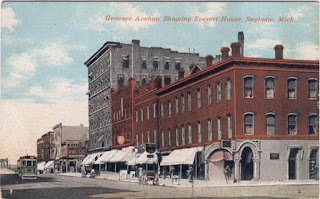 Meanwhile Midler had died, leaving Root to carry on the business, subsequently purchasing his partner’s share from the estate.  He moved the liquor house from the river bank to Genesee Avenue, the main commercial street of Saginaw, purchasing a building in the Everett Block, above, so called because it included the Everett House hotel. 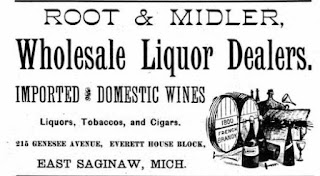 Under Root’s proprietorship the liquor business continued to prosper.  In 1880 one journal opined:  “In the house of Root & Midler we find the ‘spirit’ of enterprise still competing for a foremost position among our liquor houses.  We highly commend this house and and feel confident that their business operations will be fully as successful in the future as they have been in the past.” Said another observer about 1885:  “The business of the firm considerably exceeded $100,000, having an extent covering the entire north portion of the State.”

A master Mason, Root also engaged in politics and was elected for one term as a representative of the Second Ward to the Saginaw Common Council, but declined to run a second time.   Like Midler, Root died relatively young, passing in June 1886 at only 48 years old.   The cause was given as “congestion of the lungs.”  Of Root, his newspaper obituary said:  “In the varied relations of life he was a useful and respected business man and citizen and his private life was as quiet and unostentatious as it was spotless.  Few citizens in this city had so wide a circle of warm personal friends and his death was a source of profound regret.”

Root’s death appears to have spelled the end of both the liquor and steamship businesses.  Saginaw itself was declining. Having peaked about 1870 in timber production, the region faced both diminishing supply and demand.  Lumbering in the region virtually disappeared by 1900. The boom that brought Root and Midler to Saginaw was over.  Nevertheless, the two whiskey men from Syracuse had played an important role in the city’s heyday and its history.

Posted by Jack Sullivan at 5:54 AM