The Baker Boys and Swastika Whiskey 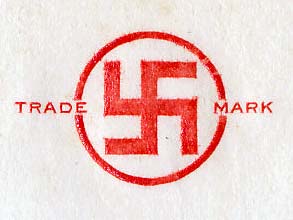 Sometime in the latter third of the 1800s, three sons of a veteran steamboat captain on the Ohio, Mississippi, and Missouri Rivers, determined to make distilling their career.  George Baker, William Jackson Baker and Richard Alexander (R.A.) Baker went on to found Baker Bros. Distillery in Franklin County, Kentucky, not far from Frankfort.  Then they chose a name for their whiskey that later would become a hated symbol of oppression and death:  the swastika. 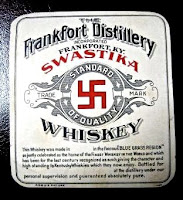 The swastika -- until the Nazis appropriated it -- for ages had been considered a harbinger of good luck. An ancient symbol, the swastika dates back 3,000 years to India. It also is an Native American icon, with origins in prehistory.  Given its positive image, it is no wonder that in the early 20th Century organizations found it an appropriate symbol. Coca Cola used it as the shape for a watch fob and the Boy Scouts of America displayed it on the spine of their 1903 “Handy Book.” It also was the symbol for a Ladies Home Journal-sponsored girls' club. 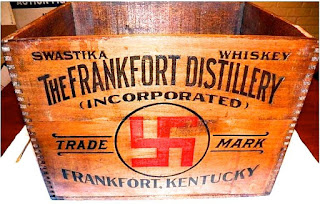 Who among the brothers selected the swastika to represent the Baker flagship brand is unclear.   It may have been George, the first son, born in Marietta, Ohio, in 1850.  William, born in Carroll County, Missouri, arrived eight years later and Richard, the youngest, not until 1865.  Although Chester Zoeller in his book on Kentucky whiskey speculates that the Baker Brothers & Co. Distillery may have been founded as early as 1869, that date makes no sense as the boys would have been too young.  Moreover, when he retired from steamboats to farming in Missouri, their father was wealthy and able to send his sons to college, delaying their entry into commerce.

My guess is that, if built in 1869, the facility was under other ownership and only later purchased by the Bakers, possibly as late as the 1880s.  The distillery was located four miles east of Frankfort on the Georgetown Pike, one mile west of the junction of North and South Elkhorn Creek on the Frankfort and Cincinnati Railroad Line.  Although details are sketchy, the original Baker Bros. distillery likely was run by George and William.  Richard did not arrive in Frankfort until 1887 when he went to work for John D. Hinde, a wealthy Kentuckian and horse breeder, who owned and operated a 600 acre model farm near Frankfort.

Hinde and his son Thomas apparently helped the Baker boys with cash to rebuild and expand their distillery and as compensation Thomas was named president of the company.  Subsequently the Hindes moved permanently to Chicago, apparently leaving the Bakers to run the operation.  Richard became vice president and George the secretary-treasurer.  William’s role at this time is unclear.  For a time he may have been running a small distillery in Pulaski County, Kentucky.

The Bakers also were having personal lives.  George married Mary Chase Donahue in 1889.  They had one child.  In 1911 at Frankfort Richard married Irma Labrot, daughter of Leopold and Louise Welch Labrot.   Her father was the owner of the Labrot-Graham distillery.  Richard and Irma’s union appears to have produced no children.  No record exists of William marrying. 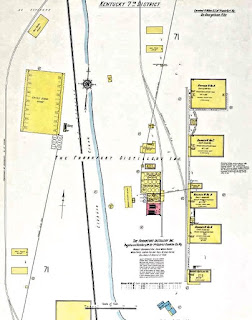 The name of the distillery changed several times, from Baker Brothers to Swastika Distillery to Kentucky Sour Mash & Rye Distillery (1903-1905) to the name by which it became best known, the Frankfort Distillery Company.  By that time the distillery was capable of mashing 700 bushels a day and had four bonded warehouses, as shown on the 1910 Sanborn insurance map here.  By 1912 the daily mashing capacity had been increased to 1,250 bushels.

The company’s flagship brand continued to be Swastika Whiskey, available in half-pints, pints and quarts.  Over the years the distillery issued a variety of other brand names, among them:  “Baker,” "Baker Bourbon,” "Baker Rye,” “Coronet,” "Elkhorn Mills,” "Gallant Knight,” "Kerry Patch,” "Old Chief,” "Old Woodpecker,” Shandon Bells,” and “Victoria.”  Of these in 1906 the company trademarked only Baker, Elkhorn Mills, Kerry Patch and Shandon Bells. Interestingly, Swastika Whiskey was not among them.

In 1913, George Baker died, age 63.  He was buried in the Frankfort Cemetery.  After his death, William took his place as secretary-treasurer of the distillery, continuing in that post until he died in 1918.  With the death of his father-in-law in 1915, Richard with wife Irma also controlled the Labrot-Graham Distillery, twelve miles from Frankfort in Woodford County.  This facility was a successor to the venerable Old Oscar Pepper Distillery, founded in 1817. [See my posts on these distilleries, January 21 and 24, 2017].

Operating two major Kentucky distilleries brought Richard Baker considerable recognition in the whiskey trade.  He is shown here in the only photograph I could find, one taken from a passport application. When National Prohibition was enacted in 1920, Baker’s distillery was one of only six in the United States authorized to sell spirits through pharmacies for medicinal purposes. 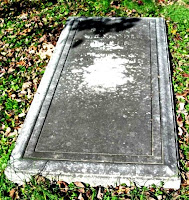 In 1922 Frankfort Distilleries Inc. was sold to  Paul Jones & Co. The new owners kept the name in order to retain the liquor permit.  [See my post on Paul Jones,  Sept 4, 2014.]  As shown here on a 1923 letterhead the offices were transferred to East Main Street (“Whiskey Row”) in Louisville. Richard Baker died in October 1940 at the age of 75 and was interred in the Frankfort Cemetery adjacent to his two brothers.  His grave is shown here.

Although the Frankfort distillery survived National Prohibition, Swastika brand whiskey did not.  By the time of Repeal, Hitler had begun his rise in Germany with the symbol emblazoned on everything from posters to postage stamps.  After the war when the Holocaust was fully understood, the swastika as a good luck symbol had disappeared forever— and with it, except for bottle collectors, any vestige of Swastika Whiskey.

Notes:  Details of the Bakers’ activities in the Kentucky whiskey trade are fragmentary and difficult to track.  While I have tried to cobble together an accurate narrative, the “holes” are evident.  It is my hope some watchful descendant will see this post and help me fill in details about this whiskey producing family.  In addition to Zoeller’s book, “Bourbon in Kentucky,” a key reference was a biography of Richard Baker in the “History of Kentucky,” by Kerr, Connelly and Coulter, dated 1922.

Posted by Jack Sullivan at 7:21 AM