“White Beaver” and His Alcoholic Nostrums

Forward:  It may be a stretch to call Dr. Frank Powell, aka “White Beaver,” a whiskey man—but only slightly.  A medical school graduate, comrade of Buffalo Bill, Western hero of dime novels, and inventor of patent medicines, Powell was peddling nostrums, more alcoholic than most whiskeys.  Moreover, his story is so bizarre as to merit telling. 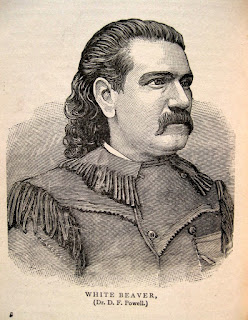 Many a boy, fetching the dime novel hidden in the corn crib, thrilled to the adventures of “White Beaver” as in story after story the hero overcame all odds to best his evil enemies.  In real life White Beaver, in reality Dr. Frank Powell, found one adversary too strong:  It was the federal food and drug agency that declared fraudulent the heavily alcoholic patent medicines that the doctor had invented and sold.

Born in a Kentucky log cabin in 1845, David Frank Powell was the son of a physician of Scottish descent and a mother who was half Seneca Indian.  When his father died at an early age, his mother took him and his brothers to live in New York State during the Civil War.  During the postwar period, the Powells moved to Chicago where Frank went to work as a drug clerk and then on to Nebraska.  In 1868 he entered medical school at Louisville University in Kentucky graduating at the head of his class.

While in Nebraska, Powell had met Buffalo Bill Cody, Wild Bill Hickok, and other figures of the old West.  After graduation he went back to the state and was named to a government post as surgeon in the Department of the Platte and later made Medicine Chief of the Winnebago Indians.  According to legend, Frank got his name, “White Beaver” from riding into the camp of a hostile group of Indians, in order to inoculate the residents against small pox.  Others say he got it by rescuing a Sioux princess.  Regardless, he embraced the title, let his hair grow long, and began to polish his legend.

During this period he also had become reacquainted with Buffalo Bill.  An excellent marksman, Powell from time to time provided Cody’s touring show not only as a doctor but also a sharpshooter.  Shown here is a photo of the two (Frank right) as they looked in their touring days.  With his Indian nickname, his time in the West, and his association with Buffalo Bill Cody,  Frank Powell was a natural for dime novel fiction, a boom business in the late 1800s and early 1900s.  The stories were about his “daring do” against a string of fictional adversaries. 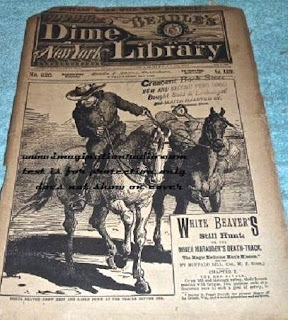 Powell is depicted here on the cover of Beadle’s Dime Library, on the trail of evil-doers.  Among his titles were “White Beaver, the Indian Medicine Chief: the Romantic and Adventurous Life of Dr. Frank Powell;” “The Wizard Brothers, or, White Beaver’s Red Trail,” that also featured Powell’s brothers; “Buffalo Bill’s Sharpshooters, or, the Surgeon Scout to the Rescue;” “Buffalo Bill’s Swoop, a Buffalo Bill and Surgeon Frank Powell Adventure.”   Although some stories  were attributed to him as author it is doubtful that he wrote any.

In fact, much of the time Powell was working as a small town doctor in placid LaCrosse, Wisconsin.  By now divorced and remarried, he also was putting his energies into mixing up and marketing a series of patent medicines.  This was an era when Indian remedies were very popular with the American public and Dr. Powell was quick to jump on the bandwagon.  Buffalo Bill helped him by investing in manufacturing the nostrums. 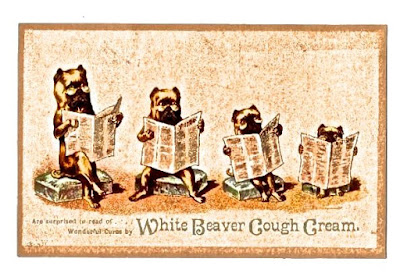 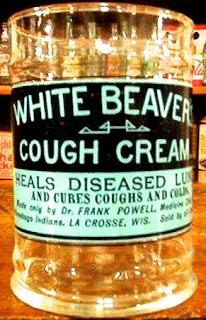 Best known of these concoctions was “White Beaver Cough Cream.  The cough cream was described as:  “A soothing compound of lung healing root and herb juices, an unrivaled remedy for the cure of coughs, colds, croup, pleurisy, bronchitis, and all other diseases of lungs or bronchial tubes.”  Fifty cents would buy a generous helping of the cream in an apothecary type glass jar with a removable top.  Smaller amounts came in clear embossed flask-shaped containers. 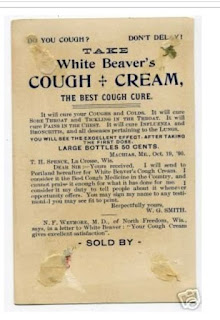 In his advertising Powell often used testimonials.  W. G. Smith of Mahias, Michigan, opined on the cough cream:  “I consider it the Best Cough Medicine in the Country.”  N. F. Wetmore, a M.D. from North Freedom, Wisconsin, hailed it for “excellent satisfaction.”   Another potion was “White Beaver’s Wonder Worker” said to “instantly relieve either internal or external pain.”  A third product Powell dubbed “Yosemite Yarrow.” 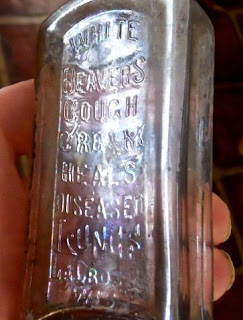 Although for a time the remedies sold well, with Frank regularly visiting Milwaukee and other larger cities in Wisconsin and neighboring states to push his merchandise.  With the passage of the Food and Drugs Act in 1906, however, Federal authorities were on White Beaver’s trail.  In 1915, the United States Attorney for the Western District of Wisconsin filed suit in federal court alleging that both White Beaver’s Cough Cream and Wonder Worker were in violation of the pure foods statute.  Analysis by the Bureau of Chemistry showed that the cough cream contained morphine, chloroform, creosote, ammonium chloride, and methyl slicylate.   It also contained alcohol, one estimate putting the strength at 82% (164 proof).  The cough mediciine was declared misbranded by claiming that it was “a remedy for croup, pleurisy and all other diseases of the lungs and air passages and effective as a lung healer in consumption when, in truth and in fact, it was not,” according to Federal officials. 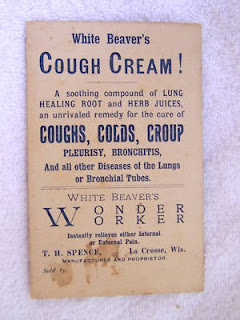 White Beaver’s Wonder Worker came in for similar harsh treatment.  In liquid form, it proved to be just under 75% alcohol, that is, 150 proof — putting it among the strongest alcoholic liquors on the market today.  In addition, it contained 1.70 grams of chloroform, and .09 gram of morphine and traces of camphor, capsicum, oil of turpentine and free ammonia.  This concoction was not a cure for the many ailments claimed in its advertising, including cholera infantum, fever and ague, and “summer complaints of children.”  The company admitted guilt, paid a $300 fine, and White Beaver’s products disappeared. 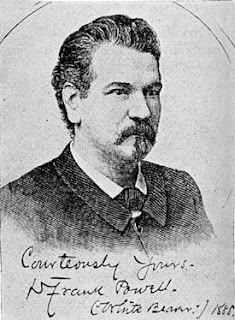 Meanwhile Powell had complemented his doctoring with politics, winning two elections for mayor of LaCrosse and unsuccessfully running for governor of Wisconsin.  His campaigning involved handing out a card with his portrait, one without the long hair and leather garments, shown here.  It did,however, contain a reminder that the candidate was White Beaver.  Eventually Powell’s entrepreneur sights shifted Westward, taking him into lumber, mining and other ventures, likely with Buffalo Bill in tow.  He was on such a business trip to California in May 1906 when he died on a train near El Paso, Texas, at the age of 61. 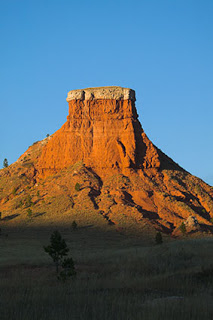 Even White Beaver’s going was the stuff of legends.  Powell reportedly had asked that he be cremated and his ashes be spread at Red Butte, Wyoming, shown here.   According to a biographer, the friends transporting his remains got drunk and failed to notice that his ashes were leaking out of a pack on their mule.  By the time the funeral cortege got to Red Butte, Powell's ashes were spread across a wide swath of the West.