Foreword:  Fire was a constant plague of pre-Prohibition distillers and others dealing with liquor.   The alcohol in whiskey is highly combustible.  An ethanol-water solution that contains 40% alcohol by volume will catch fire if heated to 79 degrees Farenheit and an ignition source is applied to it. This is called its flash point. The flash point of whiskey, therefore, is just about room temperature.  Because open flames were common in pre-Pro distilleries, the threat of fire was ever present.  From among a number of conflagrations that might have been chosen as examples, I have selected three of the most disastrous. 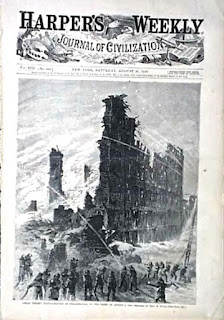 William C. Patterson, a wealthy Philadelphia businessman, neither made nor sold liquor.  His role was in providing storage for whiskey as it aged from Pennsylvania distilleries that entrusted their product to him for safe and sanitary keeping.  To that end, on Front Street above Lombard, he had erected a structure known as Patterson’s Bonded Warehouse.   It comprised eight buildings, all but one seven stories high and 220 by 135 feet.  Each was supposed to be completely fireproof, and built without connection with the others, and therefore supposed to be safe from total destruction by fire. 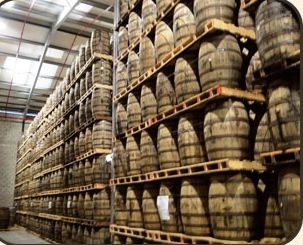 On the night of August 4, 1869, however, one wall of a building facing Lombard Street collapsed, reputedly because of excessive weight from 25,000 liquor barrels on the floors.  Stored whiskey went down with the ruins and in a few moments a violent explosion occurred, scattering timbers, bricks and flames.  Firemen appeared to have isolated the damage and it was thought other sections of the warehouse could be saved.  Then a second building exploded in fire and soon the entire facility was engulfed.  The front page of the Harpers Weekly of August 21,1869, shown above, told the story. 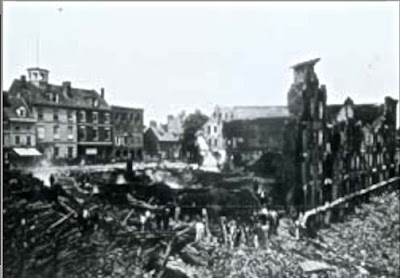 When the smoke cleared the entire warehouse complex lay in ruins.  Although no lives had been lost, the monetary loss was placed at $5,000,000 — more than 20 times that in today’s dollar.  Of that amount only $2,299,000 of the lost whiskey was covered by insurance.  The bottom line for Patterson was the personal responsibility to make good all uncovered losses.  The cost is said to have swept away most the wealth he had amassed earlier.  Said his obituary in the Philadelphia Inquirer: “From this blow his fortunes never entirely recovered, but as he had borne prosperity without being spoiled by it, so he met adversity with a calm front and an equal mind.” 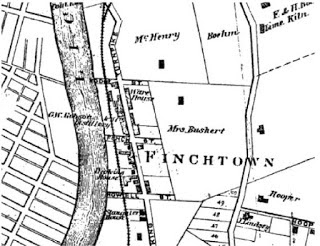 Being a close neighbor to a pre-Prohibition distillery was, at best, a mixed blessing.  It provided employment but put its surroundings at peril from explosions and fires.  A case in point was the distillery owned by George W. Robson Sr. near Newport, Kentucky, located in a small settlement on the Licking River called “Finchtown,” shown on a map here.  Because the massive plant, below, whose flagship brand was “Old 76,” provided residents with steady employment,  Finchtown was the picture of a thriving community. 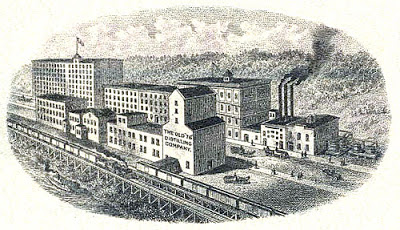 On September 4, 1888, residents got a rude awakening when an explosion rocked the community.  Around 10 p.m. as a night watchman was making his rounds on the third floor of the distillery, he was flattened by a blast from a still.  The force of the explosion collapsed the south wall of the distillery onto a boiler shed.  The watchman suffered severe burns but survived.  No other injuries were reported.  Robson quickly rebuilt with fireproofing in mind.  He issued a statement that cited how much his improvements had decreased fire insurance rates on whiskey held in its warehouses.  The danger of another fire was seen as low by insurers. 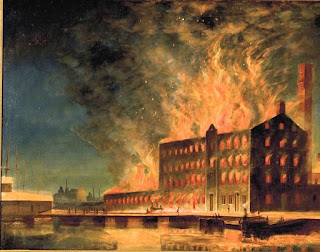 That is, until January 24, 1907.  About 9 p.m. that day, a watchman came across a blaze, one that quickly spread out of control into the community.  As the flames raged, a popular saloon and the Finchtown drug store were consumed.  The fierce conflagration moved rapidly toward the warehouses that were at maximum capacity with aging whiskey.  As the flames engulfed the storage areas, the barrels are said to have exploded like rockets in the night sky.  Once again Robeson rebuilt.  This time the people of Finchtown had had enough and many moved away.  The town ceased to appear in area directories and in 1938 the area was annexed to Newport.

No American distiller before or since has ever been faced with the death and destruction that plagued Franklin T. Corning during an period of just over five years when three major disasters in succession ravaged his Peoria, Illinois, distillery, below.  As one writer described it, Corning faced “torrents of fire.” 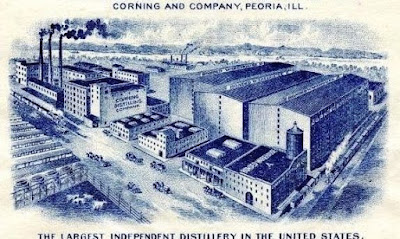 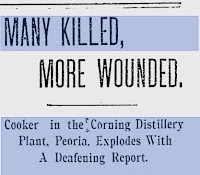 The first disaster occurred in October, 1903 when a huge steel tank used for cooking the mash exploded, hurling it through the north wall of the distillery and landing 250 feet away.  The entire north wall of the distillery was blown down and other walls badly damaged.  Bricks and other debris were propelled throughout the distillery complex.  More important, seven workmen were killed.  Two in the cooker room died instantly in the explosion;  three others, badly scalded by steam, died in the ambulance or later in the hospital, and later two others were found dead amidst the rubble.

Although Corning quickly rebuilt, he could not ward off disaster.  On the afternoon of a warm June day tragedy struck Franklin Corning a second time. Fire was seen billowing out of control from an 11-story warehouse containing some 30,000 barrels of aging whiskey.  The fire touched off explosions that caused the warehouse to collapse. The flames spread rapidly to adjacent buildings. An observer captured the scene:  “Torrents of blazing whiskey that were a foot deep spread quickly through gullies in the street and towards the river.  The burning spirits also spilled into the sewers….The flood of fire continued on its destructive course until it reached the stockyards.  Three thousand head of cattle in their pens were suffocated from the smoke and surrounding buildings that were completed a few months before were burned as well.”  This time fifteen men, including a worker who was visiting from another Peoria distillery, lost their lives in the fires and explosions. 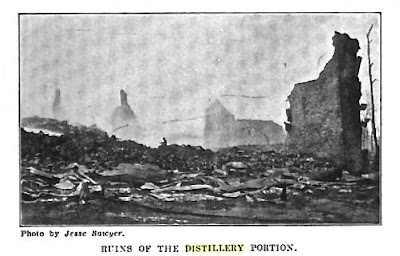 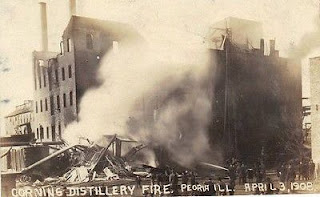 Although Franklin Corning must have been weighed down psychologically by the death of twenty-two workmen during the past eight months, the owner almost immediately announced plans to rebuild a second time.  Within a year the distillery once more was in full operation. Despite his efforts, however, Corning was not through with fire.  In April 1908 a blaze began on the fourth floor of a six-story mill building and spread to adjacent four-story elevators, engine and cooperage rooms, and threatened to engulf an eight story tower containing 125,000 gallons of whiskey.  By quick action Corning this time was able to save substantial whiskey from the flames.  As a result an original damage estimate of $750,000 ($18 million equiv.) was considerably reduced to $187,000 ($4.7 million).  Unlike the two previous disasters, this time no lives were lost.  A third time Corning repaired the damage and continued his distilling.  After overcoming those “torrents of fire,” Corning remained a well-recognized and regarded Peoria “whisky baron” until his death in 1915.

Posted by Jack Sullivan at 6:51 AM