Nautically named, for more than 55 years the Ensign Saloon was a favorite watering hole for seafaring populations along San Francisco’s waterfront.  While the proprietors knew, few patrons likely were aware that the Ensign, on the ground floor of one of city’s then taller buildings, sat on top of a sunken ship.  Not even the 1906 earthquake and fire could shake the saloon from its moorings. 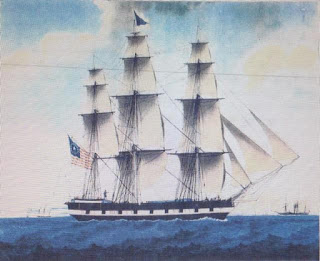 The Ensign story began when a Russian-made three masted sailing ship called the Rome, shown here, rounded the Horn and docked at San Francisco with a load of coal.  The vessel was stripped and purchased by Captain Fred Lawson for $1,000.  Known as the “hulk undertaker,” Lawson was engaged in scuttling abandoned ships in the shallows of San Francisco Bay to create landfill platforms for developers. 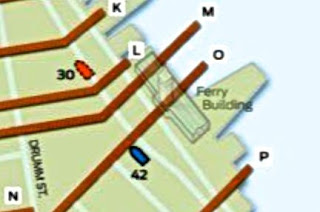 In 1890, Capt. Lawson told the San Francisco Examiner the story of the Rome.  In 1852 he was approached by a developer who urgently needed to claim title on an underwater lot at the wharf at what would become the southwest corner of Market Street and the Embarcadero.  According to Lawson:  “One morning he came running up to me and excitedly asked if I had a ship.  I told him, yes, that I had the Rome.  He told me…that if I could have the ship scuttled before 1 o’clock, he would be all right.  Before 1 o’clock my tow-boat took the Rome into where he wanted it and down she went.  I got $5,000 for that job.”  Shown here at #42 is the location of the Rome, one of 47 ships scuttled in San Francisco Bay to facilitate landfills. Note how far inland it is today.

Over the next few years the wharf area gradually was filled in and the Rome disappeared underground.  A 1895 drawing of the dock area above shows the extent of the fill area on which a number of structures had been built, including the ferry dock and the Southern Pacific Railroad station.  The Ensign Saloon looms large on the landscape as the ground floor of a three story building.  The upper two floors held a boarding residence called the C.P. (Central Pacific) House. 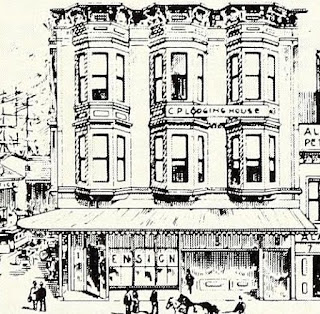 Shown here enlarged, the Ensign was well placed to do brisk business.  The saloon could count on steady traffic coming and going to the ferry and railroad station.  Most of all, the area was a seafarer’s hangout.  An old ships’ captain in 1909 recalled those early days at the wharf:  “If you walked into the Ensign Saloon and called ‘Captain,’ he recalled, “Half the men in the place would look up.”  He also recalled the free lunch offered there and in other nearby saloons:  “If it was wasn’t for the free lunch, I don’t think we would have survived.” 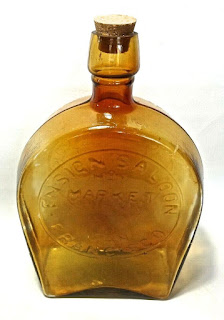 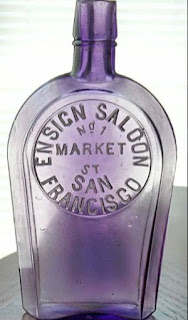 The Ensign was not only providing alcohol over the bar but also selling liquor at retail.   The assumption is that the proprietors were buying whiskey by the barrel from distilleries;  “rectifying,”  that is blending it, decanting it into glass bottles and selling at retail.  Shown here are two flasks that bear the Ensign Saloon name and address.  Each is of interest for color and shape:  a pint “shoo fly” strap sided flask in a beautiful amethyst and an elegantly designed pint in a light amber.  Given the longevity of the Ensign it is difficult to date these bottles any closer than from 1860 to about 1918. 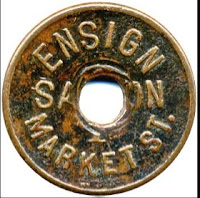 Despite its favorable location the Ensign also had to compete with the saloons and other drinking establishments that abounded in San Francisco.  One method of keeping customers coming back was to issue tokens good for redemption at the bar or later, as shown below, for a telephone call.  In those days a seaman would not likely have had his own personal telephone. 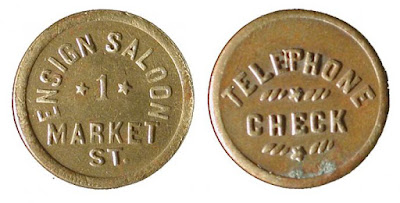 During its history the saloon knew multiple owners.  The first proprietor was Charles Osmer who operated as George Osmer & Company.  Charles and George were brothers, both immigrants from Achim, Germany.  They  appear to have lived in New York City for a time before relocating to San Francisco.  There, according to the 1860 census,  George opened a liquor dealership.  When his health faltered leading to his death in 1866, Charles took over management of the Ensign, living at the same address, perhaps at the C. P. boarding house.  Osmer and partners also managed other San Francisco saloons.

About 1869, after nine years of ownership Charles Osmer and his partners sold the Ensign Saloon and Osmer subsequently moved back to Germany.  The new owners were Claus Schwartz and Rathy Husing, publicans who already operated a drinking establishment on the southeast corner of Mission and Sixteenth Street.  Schwartz was an immigrant from Hanover, Germany.  According to the 1880 census, he was married to a woman from Hanover and had four children, all born in California. 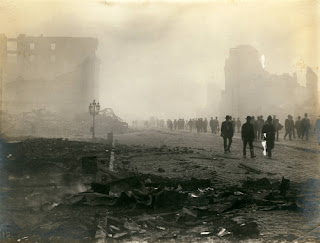 By 1882 a third partner, Alfred Meyer, joined the partnership of Schwartz & Husing.  At some point, Husing left the company.  After Claus’s death about 1898, the Ensign Saloon continued on under Meyer and a Schwartz relative named Henry.  This management team was in charge of the establishment when the Great San Francisco Earthquake and Fire devastated the city.  The Ensign Saloon appears to have been among many structures destroyed.   Shown here is just one of several photos showing the virtually complete devastation on the waterfront.  Like many local businessmen,  Schwartz & Meyer quickly rebuilt.  Shown here in the San Francisco Call  is a 1908 ad for the Ensign Saloon at the usual 1 Market Street address. 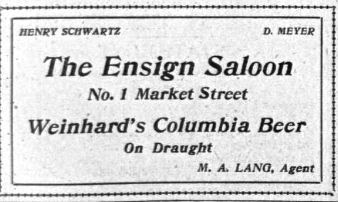 By 1910, the Ensign Saloon was sold for a third time.  The new owner was M. Theodore Reinke.  He like previous owners was an immigrant from Germany. The 1910 census found him living in San Francisco with his wife, Clara, two sons and his mother.   Reinke operated the saloon for the next seven years, apparently closing down in 1919 with the coming of National Prohibition, never to reopen after Repeal.  Despite its ending, the Ensign Saloon had an amazing run of 58 years through multiple ownerships, the Civil War, World War One, several financial “panics” and the 1906 cataclysm in San Francisco. 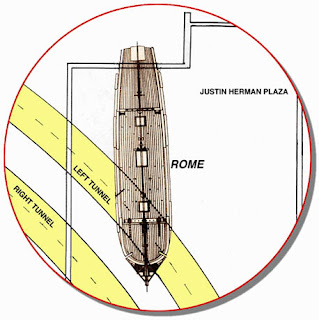 But the story does not end there.  Although the Ensign Saloon had sat on top of a sunken ship for decades, when the building was torn down and the site subsequently turned into a civic plaza, San Francisco had forgotten the vessel was down there.  In 1994, however, while the city was excavating a subway tunnel from the Embarcadero Station to Folsom Street, construction crews ran smack dab into the Rome, where it had laid undisturbed for 144 years.  It was too large to be excavated so the tunnel was bored right through the ship, as shown on the illustration here.  Remnants of the ship are now in a local museum.

Posted by Jack Sullivan at 6:11 AM