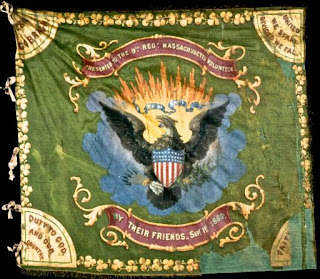 Throughout most of is career heading a major Boston liquor house, Lawrence J. Logan was known as “Colonel” in recognition of his leading the famed Ninth Regiment of Massachusetts Volunteers, better known as the “Irish Regiment,” into battle during the Spanish-American War.  Although the unit had gained national fame for courage during continuous pitched battles in the Civil War, it also suffered significant casualties in the brief war with Spain.  The banner above memorializes the Irish regiment. 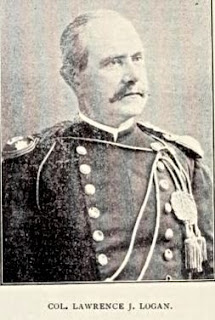 Born in Balllygar, County Galway, Ireland, in 1841, Logan, shown right, received his early education there and emigrated to the United States at the age of 16, settling initially in Worcester, Massachusetts.  He spent the next few years in a Worcester foundry apprenticing in the iron moulding industry.  By that time his brother, Peter Logan, who had preceded him to America was running a saloon and liquor store in Boston.  In 1862, Lawrence joined him there.

The young Irishman did not immediately volunteer for Civil War service, joining the “Ninth Mass”  in 1865 as the conflict was winding down.  In April, 1866, he was elected first lieutenant of Company D, serving in a reserve capacity, and promoted to captain in 1869.  According to a biographer, Logan developed “a love for military life” and after a brief period away from the regiment, he re-enlisted in 1879 and was promoted to lieutenant colonel. 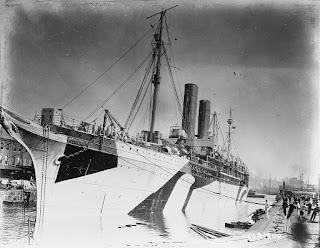 With the outbreak of the Spanish-American War in 1898, Logan, now 57 years old, determined to participate and with the Ninth Mass. was mustered into regular service.  With his fellow Irishmen, he entrained in late May from Massachusetts to Camp Alger, Virginia.   There the regiment received additional training before embarking on June 26 from Newport News, Virginia, on the U.S.S. Harvard. Shown here, the Navy cruiser landed in Cuba on July 1, 1898.

Almost immediately the commanding officer, Colonel Bogan, became violently ill and had to be returned to the U.S.  Lt. Col. Logan took command.  Almost immediately there was trouble.  On 4 July 1898, a remnant of the 9th Mass. was guarding Spanish prisoners of war held inside the Harvard.  A guard ordered a prisoner who was attempting to enter a forbidden area to sit down. The prisoner did not understand English and the guard fired a warning shot causing other prisoners to stand up. Fearing the prisoners were about to attack, guards opened fire, killing six prisoners and wounding thirteen more.  A subsequent Army investigation concluded, however, that the shootings had been a tragic mistake and no blame was attached. The event became known as The Harvard Incident.

At the time Col. Logan was leading the main body of the regiment to the fighting front.  It required an all-night march through forested and swampy ground that one writer termed “tedious and memorable.”  After a brief halt in the morning, the advance continued and by noon of the same day the regiment arrived at field headquarters. With Logan leading, the Massachusetts volunteers were assigned key positions in trenches on the extreme left of the siege of Santiago, shown here.  There the regiment experienced fierce combat and significant casualties from hostile fire and disease, recording 129 fatalities, including four commission officers. 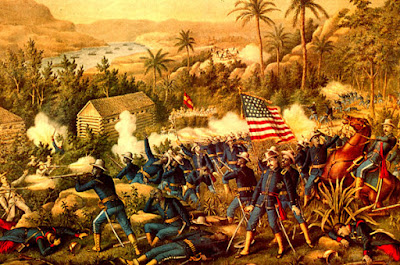 Two days after the surrender of the Spanish-held Cuban city, the 9th Mass. was ordered to secure a swampy area nearby that was a breeding ground for disease.  Soon after, Col. Logan was stricken with yellow fever that prevented him from undertaking further command duties.  He was ordered home and after weeks of care and treatment he regain much of his heath.

One month later Logan was commissioned as a full colonel to replace Col. Bogan who had died in the interim.  Then he and the regiment were mustered out of federal service and returned to reserve status.  Logan remained with the regiment until 1902.  Meanwhile, the Irish immigrant was conducting both a personal and professional life. 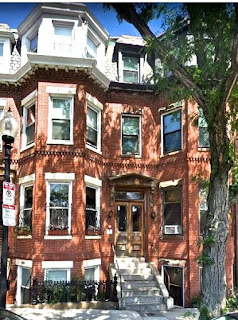 When Logan marched off to Cuba, he left behind his wife of twenty-five years, the former Catherine Mary O’Connor, and eight children, six sons and two daughters.  They ranged in age from 24 to 5 years old.  By this time he had sufficient wealth to domicile them in an impressive four-story home at 560 East Broadway in Boston.  Also in the household were two Irish women, mother and daughter, as servants.

Logan’s rise in Boston’s business circles had been rapid.  After joining his sibling in the whiskey trade in 1866 the name of the wholesale and retail liquor establishment was changed to P. J. Logan and Brother.  Within seven years Lawrence took over the business completely.  As it continued to grow, he was selling his whiskey wholesale in large ceramic jugs with his name incised in the clay. 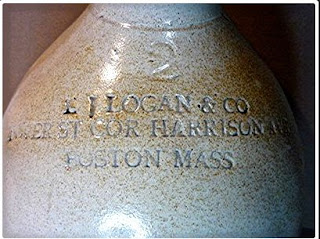 The contents likely were drawn from regional distilleries in barrels that his staff would decant into jugs for sale to Boston saloons, restaurants and hotels.  The customers in turn would pour them into smaller containers for selling over the bar. Eventually the scope of Logan’s sales would cause social historian Dennis Ryan to declare him the “baron of Boston’s liquor business.” 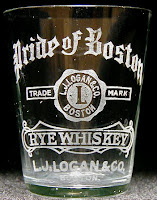 For his retail customers, Logan marketed a single brand that he called “Pride of Boston.”  Shown below is a clear glass quart flask that held his whiskey.  This originally bore a paper label identifying the brand.  Since Pride of Boston was his flagship, the assumption might be that Logan registered the name with federal authorities.  A shot glass indicates that he claimed a trademark on the name.  No evidence exists, however, that he ever actually registered the brand with the government.

The Irishman also took an interest in making beer.  In 1828 a group of Boston merchants had founded a brewery in South Boston to “slake the thirst of Irish laborers working the docks and construction sites of the city,”  As the brewery, shown here, passed from generation to generation it experienced both good and bad years.  During his ascendancy Logan, using profits from liquor sales, began investing in the property until he eventually owned the Boston Beer Company outright.  The brewery is shown here in a promotional trade card he issued. 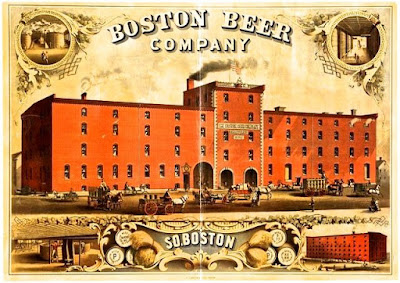 By the turn of the 20th Century, by one account:  “Lawrence Logan was raking it in as head of the company.  There were at least eighteen large breweries operating in and around Boston, but the Galway-man’s outfit dominated the “Irish market,” the pubs in the Irish wards serving up barrel after barrel of ‘suds’ brewed at the corner of D and Second Streets.  In the neighborhood stores, Logan’s wares were well represented.”

The colonel’s business and military prowess carried him into South Boston political prominence.  For many years he was a member of the Democratic City Committee and for four years served as treasurer.  In 1886 and 1887 he was elected to the Massachusetts Governor’s Council, a governmental body that provides legislative and advisory functions to the governor in matters such as judicial nominations, pardons and commutation.

According to a contemporary account: “Shortly afterward, owing to the necessity of devoting all his time to  his rapidly increasing business, he retired from active participation in politics….”  Those business interests also included banking.  Logan became a director of the Mattapan Deposit and Trust Company, the Federal Trust Company, and the South Boston Building Association, and a trustee of the Dorchester Savings Bank, shown here.

One advantage of having many sons for a whiskey man was the possibility of having them upon maturity take part in the father’s business.  In Logan’s case, two younger sons, Theo and Francis, were recorded in the federal census as working with him in his liquor house and later in the brewery.
Lawrence’s eldest son, Edward Logan, was sent to Harvard where he obtained a law degree.  When the Spanish-American War broke out, Edward joined the 9th Mass. but, unlike his father, was kept stateside in an administrative post. 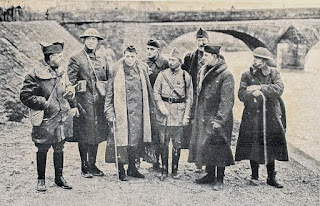 As Lawrence before him, Edward found military life quite compatible with his interest in law and politics.   Continuing to rise in rank with the regiment, in 1912 he became its colonel.  With the outbreak of World War I, the 9th Massachusetts once more was mobilized.  Edward, second from left in the helmet, is shown in France with his staff, commanded the regiment in battle.  His ability recognized by the Army, he ultimately was raised to major general and later headed the National Guard Association of the United States.  Boston’s Logan Airport is named in his honor. 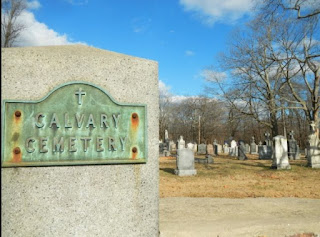 As he saw his son rise through the ranks of the military, Lawrence Logan must have been very proud.   During the same period, however, he was witnessing the onset of National Prohibition and the end of his liquor business and curtailment of his brewery, which stayed open after 1920 making only “near beer” and soft beverages.  Logan died in June 1921, age 80.  His funeral service was conducted by another son, Leo, who had become a Catholic priest.  Lawrence was buried in Boston’s Mt. Calvary Cemetery where Catherine Mary, his wife of 47 years, later would join him.

Coming to America as an impoverished sixteen year old immigrant from Galway, Lawrence Logan had risen through his success in the sale of alcohol and his distinguished military service into the ranks of Boston elite, a heritage carried on by members of his family.  The Logans clearly made their mark in Beantown.

Note:  Although the information for this vignette was obtained from multiple sources, the most important was a 1901 biography of Col. Logan that was a part of the publication, “History of South Boston  (Its Past and Present) and Prospects for the Future” by John J. Toomey and Edward P. B. Rankin, published in Boston by the authors.   Quotes unless otherwise unattributed are from that source.

Posted by Jack Sullivan at 6:38 AM