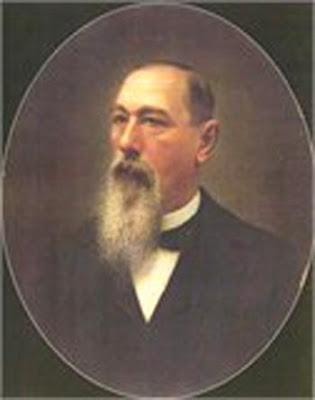 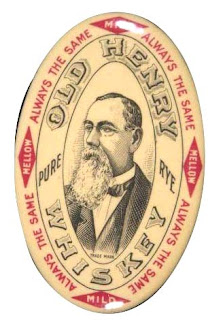 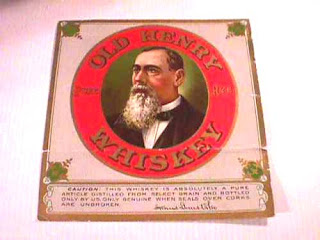 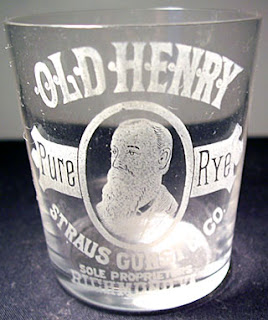 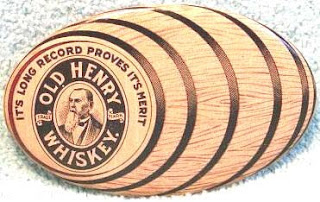 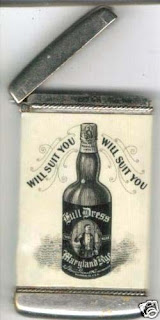 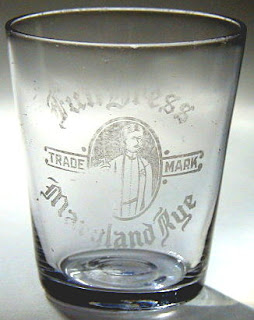 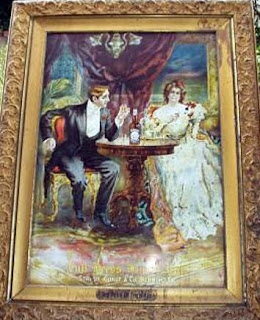 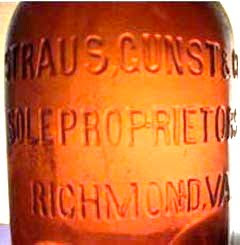 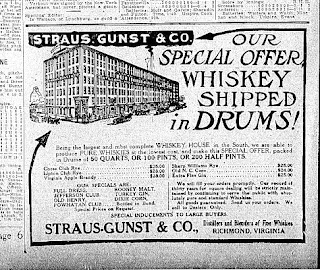 Shown here is a portrait, followed by the back of a celluloid pocket mirror, both of them depicting a distinguished elder gentleman sporting a long beard. It advertises Old Henry Pure Rye whiskey and was the product of a Richmond, Virginia, liquor firm known as Straus-Gunst & Co. They depicts Henry Gunst who indeed was old -- 75 -- when the firm first registered this brand but whose “rebel to riches” story began in 1832.

That was the year Henry Gunst was born of Jewish parentage in Bavaria, Germany. About 1850, at age 18, he emigrated to the United States, sailing from the port of Hamburg accompanied by an older brother. Initially the two worked in Brooklyn, selling baskets to the Fulton Fish Market. After several years in New York, Henry relocated to Bowling Green, Virginia, a small town between Richmond and Washington, D.C.

There Henry found a wife, Bettie Oberdorfer, like himself a German immigrant of Jewish heritage. She was seven years younger and would outlive him by 10 years. He established a tannery and fathered two children. His business was small, just himself and one other worker. He held no slaves. Nevertheless when the Civil War broke out, in the summer of 1961 Henry shut down the business, left his family, and joined the 13th Virginia Infantry Regiment.

This German immigrant saw fierce action throughout the war, fighting at First Manassas, in Jackson’s Valley Campaign, Cold Harbor and in the battles up and down the Shenandoah Valley. Although the 13th Virginia was present at Lee’s Surrender at Appomattox, Henry apparently had returned to Bowling Green by that time. According to a somewhat dubious family legend, when he attempted to restart his tannery, a Yankee officer told him he first had to swear an oath of loyalty to the Union. Henry, the story goes, chased the officer out of town with a pitchfork.

Sometime in the late 1860s, Henry moved to Richmond with his growing family -- six children in all -- and set up in the whiskey trade. At that time the liquor industry beginning to thrive there. As other Southern states increasingly voted “dry,” the Virginia capital became a mecca for whiskey distillers, rectifiers and dealers. .

Henry Gunst was one of the first. In 1879 he founded a whiskey firm, claiming to be both distiller and whiskey blender. His partner, Straus, appears to have exited early. Nevertheless, Straus-Gunst & Co. remained the name of the business throughout its lengthy existence.

The liquor firm advertised widely in regional newspapers and claimed outlets for its whiskey in Washington, D.C., most of the larger cities in Virginia, North Carolina, and in Jacksonville and Pensacola, Florida. It also carried on a vigorous mail order business, particularly in states and localities that had enacted anti-liquor laws.

Although the business marketed a number of brand names, two were principally featured. A moderately priced whiskey was Old Henry Pure Rye. It came in a flask size with a cork pull, as a long-necked pint and in a quart bottle. In addition to the pocket mirror shown above, the firm gave away Old Henry shot glasses and a second style of pocket mirror. All featured the man with the long beard -- “Old Henry” Gunst.

The top quality whiskey featured by Straus-Gunst was Full Dress Maryland Rye. A quart bottle of this brand is shown on a celluloid match safe. Advertising giveaways bearing this brand name were a shot glass, and, for a saloon keeper, a metal sign showing a gent having a drink with a lady of dubious character. Stripped of their labels, many Straus-Gunst containers are embossed with the name of the firm, as shown here.

As the business grew and flourished, Henry Gunst became a rich man, recognized in Richmond for his business acumen and wealth. He and wife Bettie lived in a mansion and he was chauffeured around town in a fashionable buggy. According to an account by his great granddaughter, Henry is said always to have traveled with a gun at his side. The reason he gave was the need to collect bills from saloons in rough parts of Richmond and the surrounding countryside.

Henry continued to be proud of his “Johnny Reb’” Confederate past. In 1888 he attended a Virginia exposition related to the Civil War and displayed a 10-chambered pistol he had taken from an Union officer on the battlefield.  He also was a fond grandfather, as shown below. 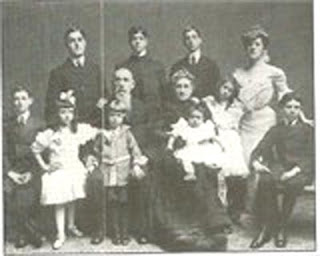 In 1907 Henry Gunst died, age 75. The business was carried on without interruption by other family members, principally his son Emmanuel, until Virginia voted complete prohibition of alcoholic beverages in 1916. That same year the firm moved to Baltimore. With the onset of National Prohibition in 1919 it disappeared completely. Nonetheless, Straus-Gunst had survived 40 years, a long time in the whiskey trade and fulfilled the vision of its “Johnny Reb’ to riches” founder, Old Henry.
Posted by Jack Sullivan at 7:16 AM