Frank Tullidge Was Shaped by War, Prospered in Peace 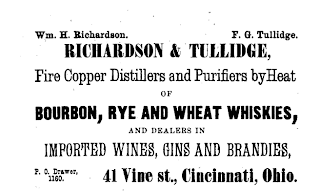 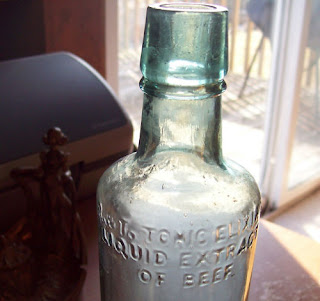 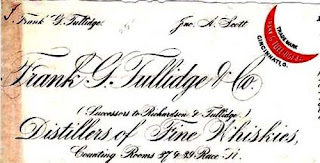 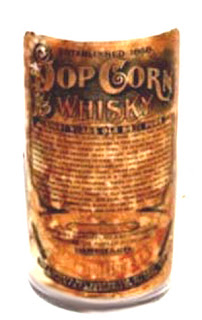 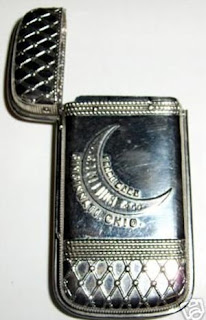 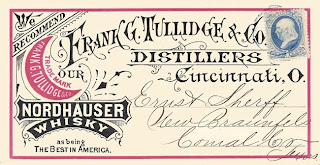 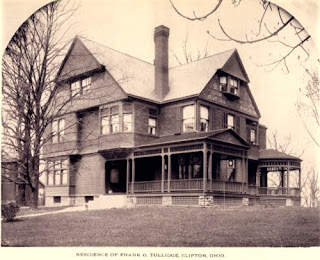 The life of Frank G. Tullidge was unalterably changed by his service in the Union Army during the Civil War during which he was engaged in many major battles. He returned from combat to found a liquor business in Cincinnati that brought him community prestige and prosperity.

Tullidge’s story begins about 1844 when he was born in the village, now city, of Richmond, Indiana. His parents, Alfred and Belinda, had immigrated as a young couple from England and settled in that Midwest frontier community. There the father opened a grocery store and established a reputation as a lively and flamboyant character. Frank was educated in Richmond, worked with his father in the store, and might have lived out his life as a grocer except for the outbreak of the Civil War.

Now in his early 20s, Frank was eager to join the “Boys in Blue” but initially Mother Belinda was strongly opposed. Overcoming her opposition in 1861 he enlisted for three years in the 8th Regiment, of the Indiana Volunteer Infantry. Tullidge was made a lieutenant and second in command of his company. In that role he saw action at many major battles, including Chickamaugua, Missionary Ridge, Kennesaw Mountain and the siege of Atlanta. Eventually he was promoted to captain and released from command to join the staff of General George Henry Thomas as an inspector.

When the war ended, Tullidge was one of the first to join a veterans organization of officers called the Military Order of the Loyal Legion of the U.S., or MOLLUS. They were dedicated to maintaining the Federal union. About the same time he moved south from Richmond about 40 miles to the much larger city of Cincinnati. He may have been drawn there by another former soldier, William H. Richardson. Together about 1868 they founded a liquor business under the name Richardson & Tullidge.

The partnership, although it encompassed three moves in Cincinnati, lasted only eight years. In 1876 Richardson departed and Tullidge renamed the firm Frank G. Tullidge & Co. A bill head emphasized the change. He moved once again, this time to 35-39 Race Street, his address for the next eight years. Over time Tullidge’s company would move with some frequency -- to Vine St. for four years, West Fourth for eight, East Fifth for eight, East Third for two, and Main for one.

Reducing the number of whiskey brands in his stock, Tullidge put a major emphasis on “Pop Corn Whisky” (his spelling), claiming sales of 27,547 gallons in 1879. He featured it on postcards and at least one unusual trade card. The latter shows a man looking into a huge gaping mouth while the caption reads: “Don’t look down in the mouth simply because business isn’t as good as it might be.” The message is aimed at saloon owners suggesting that Pop Corn Whisky might be the answer to their financial woes. The whiskey could be purchased by the barrel, half barrel, or 10 gallons as a sample size. 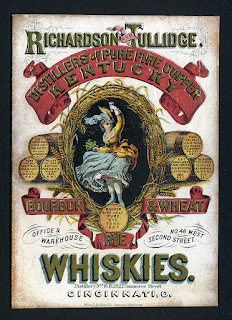 Tullidge also provided fancy giveaway items to his saloon customers, including a large framed picture of a lightly clad aristocratic damsel being attended by a half-nude slave girl. It was styled to hang in a bar and bore his name at the bottom. He handed out a fancy match safe with his logo emblazoned on it. He also advertised widely his import business of brandies, cordials and imported liquors such as Nordhauser Whisky, a type of German schnapps made of corn.

Throughout his career, Tullidge continued to be involved in Civil War veterans affairs. When Civil War General Andrew Hickenlooper died in Cincinnati in 1904, the press recorded that Frank was among the generals, colonels and other high-ranking officers who acted as pallbearers. As a mere captain, Tullidge must have earn his place escorting the hero’s casket because of his prominence among local veterans.

Other details of Frank Tullidge’s personal life remain scanty. We know he grew prosperous, occupying a large home in Clifton, a suburb of both Cincinnati and Dayton. He had one son, Frank, whom he could afford to send to Yale University. But few other family details are available. His liquor company disappeared from city directories in 1911, five years before Ohio voted “dry.” We can speculate that the firm ended with Tullidge’s death or some disability. But that is only speculation.

Posted by Jack Sullivan at 7:31 AM