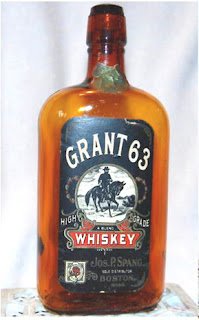 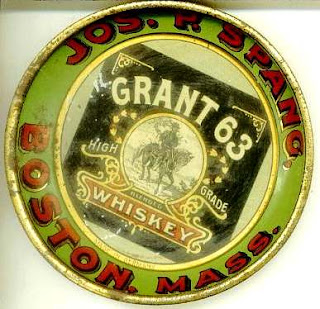 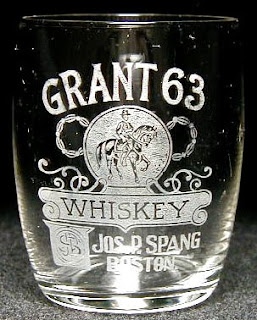 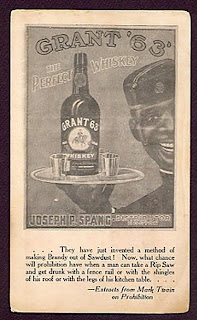 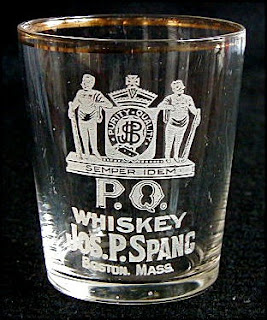 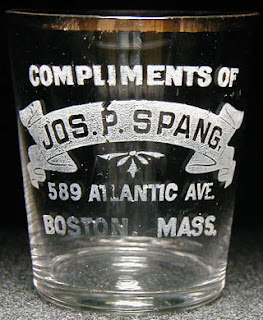 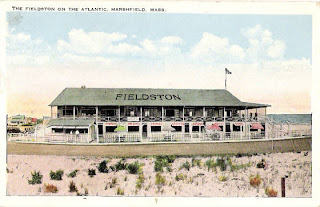 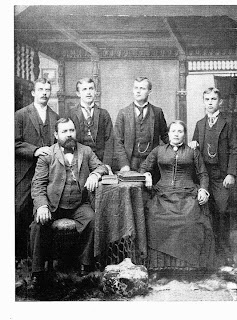 Although Joseph Spang was a relatively older immigrant to the United States, he wasted no time in understanding that a good American name could be a strong asset in selling whiskey. In quick succession he appropriated the Boston Tea Party, Ulysses S. Grant, Mark Twain, and eventually Paul Revere to give legitimacy to his liquor business. He even ventured abroad to appropriate the name of Queen Wilhelmina of Netherlands for his booze.

Spang was born in Trier, Germany, in 1842, the son of Joseph and Maria (Binsen) Spang. While still in his teens, he joined the Prussian army and seemingly reveled in military life. He is shown here in uniform with his rifle. During his period of service Prussia was in almost constant conflicts and Joseph was said to have been part of the Kaiser’s special forces. He received a number of decorations for his valor in battle.

Military service, however, did not deter him at age 25 from marrying Katherine Kolf and, although away from home for extended periods, from fathering four sons. In 1880 after serving 25 years in the Prussian army Spang was discharged. Almost immediately he scooped up Katherine and his boys and emigrated to the United States, settling in Boston.

Spang’s initial few years in America have left little record. He clearly had a talent for commerce and worked hard to succeed. There is evidence he spent time employed in a beer bottling operation, as well as in food and hotel enterprises. From indications of Spang family wealth it can be assumed that he prospered over his first dozen years in America, well enough to start his own business. In 1892 Joseph Spang & Co. first showed up in Boston business directories, operating at 1981-1895 Washington Street.

Spang ran a liquor dealership, one in which he featured his own brands and began dropping names. A featured brand was “Tea Party,” a favorite subject in Boston. The label shows a ship from which Colonials were throwing bales into the ocean. More questionable was his naming of a whiskey “Grant ‘63,” referencing Ulysses S. Grant in the year Grant took over as commander of the Federal armies during the Civil War.

Although a number of whiskey brands had been named for Civil War generals on both sides, no one previously had touched Grant. His reputation for alcoholism apparently had led whiskey men away from claiming him on their labels. Years later, Spang, perhaps because he was not fully aware of Grant’s reputation, forged ahead with the brand as his flagship. Moreover, he featured a logo of the General (later President) on horseback. Grant, known to be an excellent horseman, was pictured by Spang on the bottle label and giveaways such as a tip tray and a shot glass.

The firm also handed out blotters that featured a smiling black bellhop delivering a bottle of Grant ‘63 along with two glasses and the message: “The Perfect Whiskey.” This item additionally dropped the name of Mark Twain, America’s most famous author of the time, and included an observation by Twain on Prohibition. Earlier Spang had circulated a brochure containing Twain’s complete satirical anti-Temperance screed.

He also named a whiskey for Revolutionary War hero Paul Revere. When the young Dutch princess, Wilhelmina, ascended to the throne of the Netherlands and caught the world’s imagination, Spang capitalized on her celebrity by naming a whiskey after her. His firm also featured other brands, including: "589,” "Bay State,” "Deep Water Spring,” "Dr. Seymour's Malt,” "Feldt.” "Jaunting Car,” "Old Minden,” "Old Schedule,” "Ould Andy Scotch," P. Q.,” "Spang's P. Q.,” and "Spang's Pure Food.” Although his firm featured giveaway shot glasses for some labels, it failed to register any of these brands with the Federal Government for trademark protection.

The photo here shows Spang wealthy, well fed and relaxed in the midst of his family during the mid-1890s. Sitting is the man himself, wife Katherine, and standing, from left, sons Joseph P., Frank, John and Clem. Note that all the males are wearing gold watch chains, symbolic of their financial well-being. In 1904 at the age of 62, Joseph Spang died and is buried in Boston's New Calvary Cemetery.

With his father's death, Joseph P. Spang, standing at left in the photo above, became head of the family and the manager of the liquor business. He soon ran into trouble. In 1907 the firm was charged by the Massachusetts Board of Health with food adulteration, accused of adding cane sugar to maple syrup. The charges were not prosecuted. In 1909 the same Board charged it with adulterating its whiskey by adding water. This time Joseph P. was found guilty and paid a fine. Once again in 1913, the Massachusetts Agricultural Extension Station accused the firm among a group of brewers for adulterating beer.

With State officials constantly looking over his shoulder, Joseph P. may not have been too concerned when National Prohibition shut down his alcoholic trade. Perhaps sensing the tide, he already had turned to real estate development. He built Fieldston-on-the-Atlantic, a beach resort near Boston. It was a holiday venue with restaurants, rides, and a ballroom at which top U.S. bands performed.

Joseph P.'s son, Joseph P. Spang Jr. would go on to become one of America’s most recognized business leaders of the 1950s and 60s, credited with making Gillette Safety Razor a major company through its sports sponsorship. After his successful career identifying his whiskey with famous events and individuals, Grandfather Joseph Spang would have appreciated his grandson becoming a name to drop.
Posted by Jack Sullivan at 12:03 PM