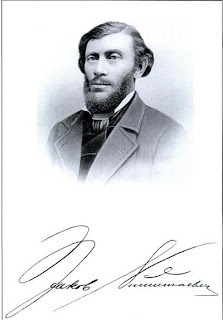 One of the earliest distillers to be treated on this blog is Jacob Nunnemacher of Milwaukee, shown here.  Nunnemacher’s career as a whiskey man was marked by his many accomplishments, major mistakes, a criminal conviction, prison, a Presidential pardon and an early death.

Nunnemacher was born in 1819 in the German-speaking area of Switzerland at the town of Teufan, shown here.  In 1841, age  22 and seeking his fortune, he embarked from Le Havre, France, for the United States.   His first two years were spent in New Orleans.  In 1943 he followed other Swiss immigrants to Milwaukee which already had a large German-speaking population.

Almost immediately he opened a meat stall at the public market that sat on the spot of the current City Hall.  His enterprise was an immediate success and he got married the same year.  His bride was Catharina Barjenbruch who herself had recently arrived in the U.S., probably as a serving girl for the family of an immigrant doctor.

When the market was razed to build City Hall,  Nunnemacher moved into a building he now owned in downtown Milwaukee at the current Wells and Water Streets.  His growing family -- four boys and a girl -- lived in two stories above his retail meat market.  As the Nunnemachers grew more prosperous,  Catharina complained about the living quarters.  In response,  Jacob plunked down $25,000 cash to buy a mansion on fashionable  Wisconsin Avenue.  As shown here, he would later turn the first floor of the house 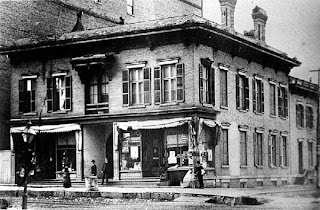 In 1854 the Nunnemachers moved south of Milwaukee to an rural area called Town of
Lake.  His property reportedly was obtained as a U.S. land grant.  There he started a cattle farm and, more important, a distillery.   He also built an Italianate mansion, shown here, and moved his family to the site.   Although it was an hour and a half trip by ox cart back to town to transport wine and spirits, the operation allowed Nunnemacher to fatten steers, brought from

Texas annually, on distillery slops,  the mash left after alcohol was extracted.  He then sold the beef in his downtown meat market.  The Town of Lake location also provided ample wood for Jacob’s whiskey processing.

Before the Civil War,  Nunnemacher found a ready trade both in meat and whiskey.  At the 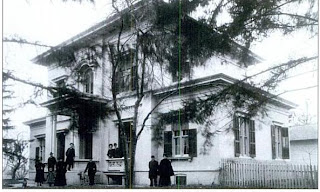 outset of the conflict,  however, the Federal Government slapped a $1 a barrel tax on   beer and a stiff $1 a gallon tax on whiskey.  That made drinking beer cheaper to the detriment of the hard stuff and Nunnemacher’s sales suffered.  His distillery profits took a second hit after the war when Congress raised the whiskey tax to $2 a gallon.  Swallowing hard, initially he paid it.

Before long, he and other Wisconsin distillers ran into difficult competition from Chicago distilleries who were selling their booze in Milwaukee for $1.15 a gallon.  Nunnemacher and his colleagues soon figured out that the Chicagoans were not paying the tax but rather paying off the revenue agents sent to collect it.  Unwisely, Jacob joined  them in the corrupt scheme.

As his bookkeeper put it later:  “He didn’t mind paying a fine now and then or a little protection money to the revenue agents and those higher up.  Everybody was doing it.” By this time Jacob’s eldest son, Hermann, was working with him in the distillery and a conduit 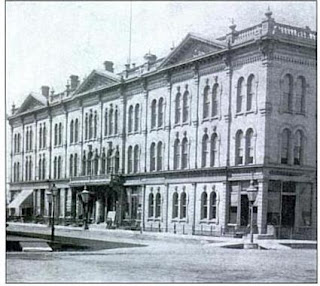 for his payoffs to federal revenue agents.   With Hermann,  Jacob also created the Nunnemacher Block in 1871 in downtown Milwaukee that included a Grand Opera House, shown here with its stage.  Seating more than 500, it was the grandest theater Milwaukee had ever seen.

The Nunnemachers were now recognized among the business elite in Milwaukee and, indeed, Wisconsin.  A contemporary author says of Jacob:  “His friends were always cordially welcome and he received here friendly calls and visits from numerous noted Milwaukee businessmen, who were pleased with the generous hospitality and charmed and greatly entertained by his witty and humorous conversation.” 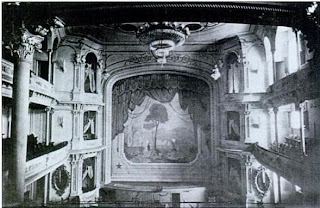 The situation, however, was about to change drastically.  In 1868  Congress amended the revenue laws and stiffened the penalties against avoiding the whiskey tax.  No longer was this fraud punishable only by a fine but now it incurred jail time.  Jacob told his friends that he wanted no more part of distilling under the new law.  Early in the 1890’s he ostensibly sold the distillery to the Kinnikinnick Distilling Company, a whiskey rectifier then located in downtown Milwaukee. 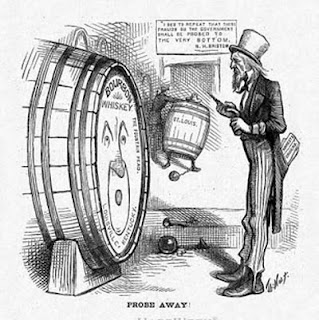 Although the terms of the sale were not public, the U.S. government later would claim it was a sham.  Jacob’s home and cattle business was still contiguous to the whiskey-making and he appears to have directed much of the operation, working with the distillery manager.  His  accountant later recounted:  “But he couldn’t stay away from the plant.  And when he was out there, he couldn’t help ordering the men about, just as he always had done.”

Thus it was in 1875 that Jacob Nunnemacher became caught in what came to be known as the “Great Whiskey Ring.”  On one day in May 1875 the Secretary of the Treasury using secret agents from outside his own department directed a series of raids throughout the country,  including 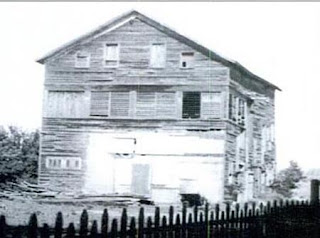 Milwaukee.  They arrested 86 Federal revenue agents and other government officials and 152 whiskey men. Jacob Nunnemacher was among them.

Loudly protesting his innocence,  Jacob demanded an early trial. That occurred in March of 1876.   The government claimed that he was a “party of interest” in the operations of the distillery, that he had conspired with the Kinnikinnick manager to manufacture and remove illicit spirits from the distillery, and that his son, Hermann, was the courier for payoffs to crooked revenue agents.  Although found innocent of three charges, on a fourth, conspiracy to defraud the U.S. government,  Nunnemacher was convicted and sent to prison for six months.

Nunnemacher spent only two months in jail.  His friends, influential Republicans, petitioned President Ulysses S. Grant for a pardon, which he swiftly granted.  Nevertheless, accord to contemporary accounts, the experience broke Jacob physically and mentally.  Only 57 years old, he died the same year as his release from prison. The distillery he founded also went out of business. The buildings were allowed to deteriorate, as one shown above, and ultimately were razed.

Their father’s disgrace did not stain the Nunnemacher family future.  Two of Jacob’s sons became leading Milwaukee businessmen, engaged in banking, manufacturing and grain shipping.  Interestingly, Milwaukee’s historical accounts of Jacob, his distillery and his accomplishments invariably omit his ignominious end.  To this day Nunnemacher is hailed as one of the City’s business pioneers.  His prison term is not mentioned.