Afternoon Cocktails in the Tower with Gilbert 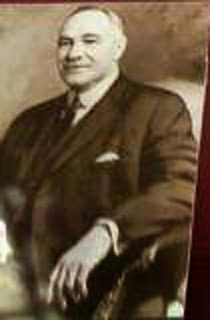 I have spun a fantasy for myself.  It is 1915 and I am among the “beautiful people” who have gathered for cocktails late on a summer afternoon at a mountaintop mansion with a tall tower located not far from Hartford, Connecticut.  But there is no bartender.  Just a man named Gilbert and he pours our already prepared drinks from bottles that bear his name.  We are witnessing a revolution in the liquor trade:  Heublein’s premixed cocktails.

Not that Gilbert F. Heublein, shown here, was anything but a legitimate whiskey man.  In the 1870 U.S. census at age 20 he gave his occupation as “bartender,”  His father, Andrew, with whom he was living, was recorded as “saloon keeper.”   Both had been born in Bavaria, part of Prussia, Gilbert in 1849.  Sometime between 1853 and 1856 Andrew emigrated to the United States with his wife, Lena, Gilbert and a second son, Louis, settling in Hartford.  Two more boys would be born to the couple in America.    Around 1860 Andrew Heublein, having accrued sufficient capital, opened a saloon and a hotel bearing his name on Mulberry Street.  As his sons reached maturity,  the father took them into his thriving business, one that eventually expanded into food and liquor distribution.

At age 25,  Gilbert, well established financially, proposed marriage to Louise M. Gundiach, the daughter of a prominent German-American businessman.   Both avid hikers, the engaged couple spent considerable time tramping on Connecticut’s Talcott Mountain.  On one of those outings, Heublein promised his bride-to-be that someday he would build a mansion on top of the mountain for her, one with a lookout tower.   In 1875 they married and eventually would have two children.  They bought a house, shown here, on Hartford’s fashionable Prospect Street. 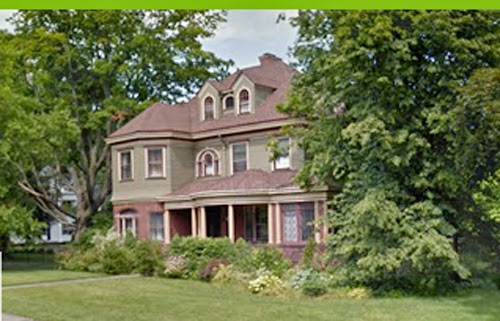 That same year an incident occurred that would help make Gilbert’s promise come true. According to the story, he and Louis had prepared a quantity of premixed cocktails for a large annual picnic.  It rained and the event was canceled.  A few days later a employee of the Heubleins was told to dispose of the unused beverages.  Deciding to taste them first, he found that the drinks had suffered no deterioration and announced the discovery to his bosses.  The Heubleins took note and began selling the premixed libations in their saloon and restaurant.   The cocktails proved very popular with customers and increasingly became the focus of the family’s attention.

In 1890 Andrew Heublein turned the entire business over to his sons and the company became Gilbert F. Heublein & Bro.  The new firm concentrated on the premixed cocktails, advertising them widely.  As shown here, Heublein’s ads called them “Club Cocktails,” to be substituted for tonics of uncertain 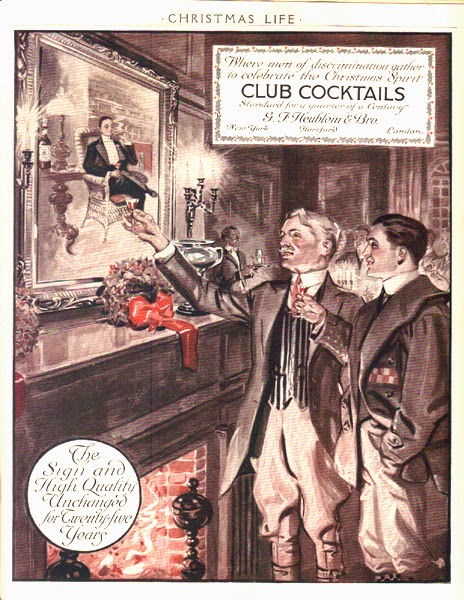 composition:  “Would not such a drink put new life into the tired woman who has shopped all day?   Would it not be the drink to offer to the husband when he returns home after his day’s business?”  The Heubleins offered a choice of premixed drinks, including martinis and manhattans.  Their ads also offered snob appeal, catering to the “carriage trade.”

It has been written that the cocktails proved so popular that a distillery was built to to satisfy the increasing demand.  I can find no reference in government records, however, that the Heubleins ever owned a licensed distillery.  My assumption is that they were operating a “rectifying” operation,  compounding and blending spirits to achieve the cocktails.  The Heubleins also were issuing their own whiskey, a

primary house brand being Federal Club.  They labeled it prominently as a “blend.”  As its liquor business thrived,  G. F. Heublein & Bro. opened a sales office in New York City and in 1915 incorporated the company.

The success of Heubleins' Club Cocktails  made it possible for Gilbert to keep his promise to Louise although some 37 years late.  In 1914 he commissioned the architects Smith and Bassette to design the family a summer home modeled after buildings in his homeland of Bavaria.  The mansion took two years to construct and cost $250,000, the equivalent of almost $6 million today.  The building rises to a tower 165 feet tall  and features a steel frame of 12-inches girders anchored into the bedrock of the mountain ridge.  The tower was an engineering marvel of its own, built to withstand winds of more than 100 miles an hour and featured a five passenger elevator, considered to be the first residential elevator in the state.  For more than 20 years, Heublein and his family enjoyed their mountain retreat, often the scene of gaiety and entertainment of weekend guests. 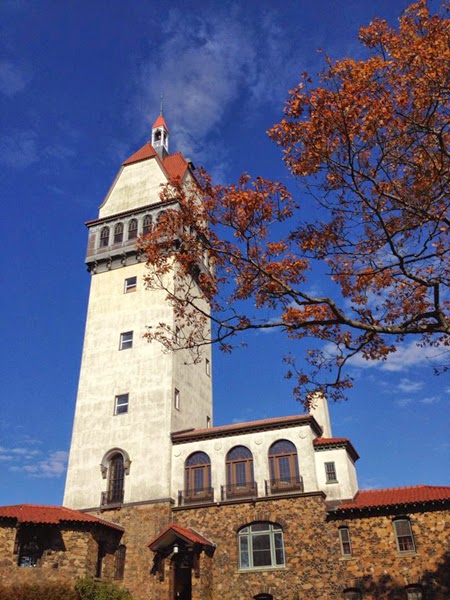 The technologies of the tower must have gratified Heublein who was known throughout his life as an inveterate tinkerer.   Along the way he is said to have invented the highly useful device shown here,  a hexagonal shaped wrench called an Allen key, meant to turn a hex screw head  With the coming of 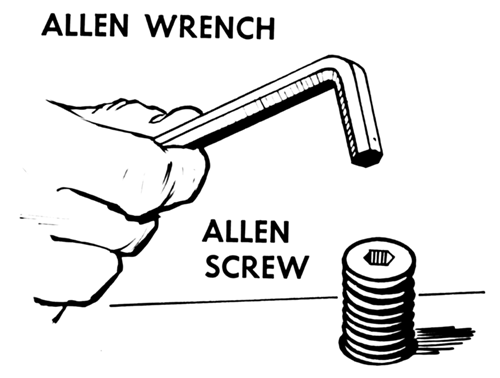 the automobile,  Heublein became a collector and founder of the Hartford Car Club.  So protective was he of his vehicles that he designed and built a turntable at his Prospect Street house so he would not have to back out of his driveway and risk being struck by a passing motorist. 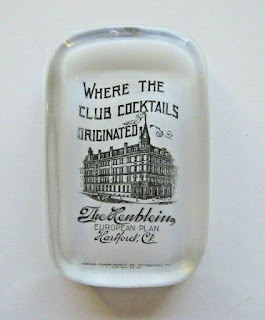 As his liquor trade expanded, Heublein moved into other businesses.  He built a hotel in a prime location in downtown Hartford, one that stood opposite a city park at 180 Wells Street where it joins with Lewis and Trumbull Streets.  It was called the Heublein Hotel and for a time was the top hostelry in town.

Gilbert also was looking around for other products with a nationwide appeal.  Early on he had seen the potential for a steak sauce that had been developed in England about 1830, called “A-1 Sauce.”   He introduced it to a receptive American audience and registered a U.S. trademark in 1895.  Although initially strictly secondary to the the cocktail business,  condiment sales ultimately would prove important.

With the advent of National Prohibition the production, transportation and sale of all Heubleins' alcoholic products was made illegal.  For 13 years Heublein Cocktails were only a memory.  The

company was able to survive because meat was becoming more common on the tables of average Americans and A-1 Steak Sauce became a staple at the dinner table as well as in the restaurants of America.  The company survived Prohibition. When Repeal came Gilbert was 85 years old and it was his grandson, John Martin, who resurrected the bottled cocktails and for a time made Heublein the largest liquor distributorship in America.

Gilbert Heublein died in 1937 at the age of 88 and was buried in Cedar Hill Cemetery in Hartford. His gravestone is shown below.  The Heublein Hotel was torn down in 1965 to make way for an office building.  But his home on Prospect Avenue still stands and the tower he built for his wife can be seen atop Talcott Mountain.  Known as the Heublein Tower, it is now a tourist site.  The liquor business he created was acquired by the R. J. Reynolds Tobacco Company for $1.4 billion in 1982, thus ending almost a century of family ownership.  Still extant are the premixed cocktails that Heublein pioneered and -- Gilbert would be proud -- they continue to bear his name. 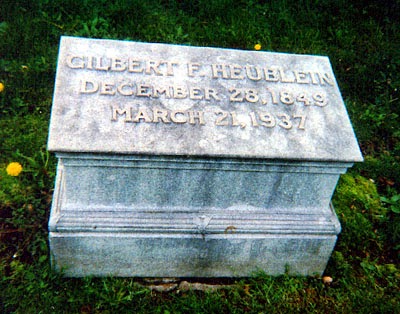 Posted by Jack Sullivan at 8:21 AM