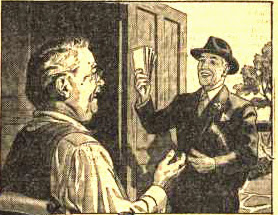 Charles J. Gallagher and Edward Burton ran a liquor wholesale and retail operation in Philadelphia from 1877 to 1918 that advertised by showing sprightly looking elderly gentlemen intoning a rhyme that gave credit to G & B Whiskey for their vitality.  The same could be applied to the partners themselves:  In time they would be well preserved not only through the artifacts they left behind but also by a 1945 advertisement purporting to depict them live and kicking.

Except for short biographies of the partners by the Friendly Sons of St. Patrick, an organization to which both belonged, personal information about them is sparse. Gallagher was born in Philadelphia in March 1839.  His father was an immigrant from County Tyrone in Ireland.  Born in June 1847, Burton, also a native son of Philadelphia, was somewhat younger than Gallagher,   He was recorded as the grandson of Rebecca and Benjamin Hutton through his mother and the son of Robert Burton.   As youths both individuals apparently served apprenticeships working for other Philadelphia merchants, likely in the liquor trade. For a time Burton worked for Philip Powell, a immigrant Irish store owner.

Charles Gallagher open a wholesale Philadelphia liquor establishment in 1872 when he was 33,  locating it initially at 1001 Coates Street.  Adjacent to the Delaware River,  the street was so named because it ran through the estate of the Coates family.  A year after Gallagher moved there, the name was changed to Fairmount Avenue.  It seemed to be of no consequence to his liquor trade because by that time he had moved to 700 North 10th Street. 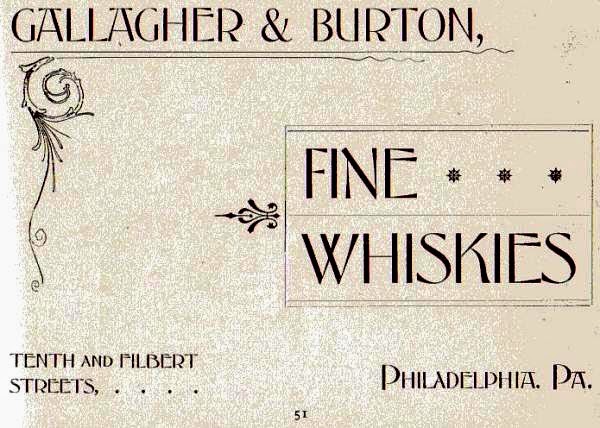 When Gallagher was joined by Burton in 1877 to form their partnership,  a new location was chosen at 10th and Filbert Streets.  An elaborate,  “art nouveau,” trade card advertised that address, as well as “fine whiskies.”  Gallagher & Burton, although at times claiming to be distillers, have no record of owning a distillery.  Many Pennsylvania distillers were very willing to supply them “raw” product for “rectifying,” that is blending and compounding whiskey to achieve desired tastes.  Rectifying is an art and not all whiskey men were accomplished at it.  Gallagher and/or Burton were talented at blending for smoothness and taste and their liquor began to achieve a national reputation. 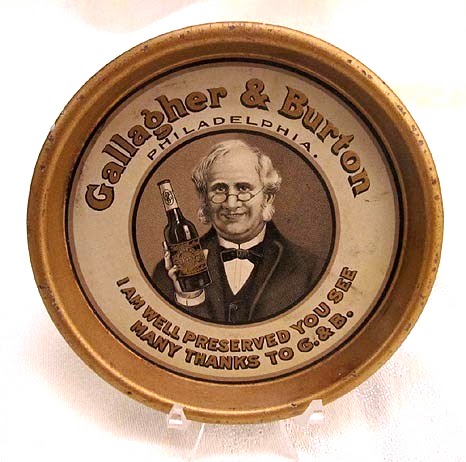 Their flagship brand bore their own name.  It was vigorously 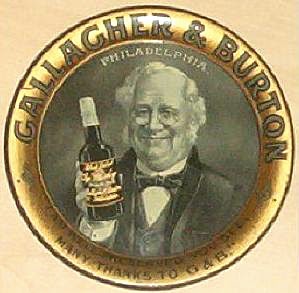 advertised and featured on their giveaway items to favored customers like saloons and restaurants carrying their products.  Among those items were serving trays featuring the Gallagher & Burton name illustrated by prominently and well-dressed elderly gentlemen intoning the doggerel verse: “I am well preserved you see;  many thanks to G. & B.”  Two trays are shown here.  While each geezer is similarly dressed and holds a bottle, differences can be noted in their facial appearance. 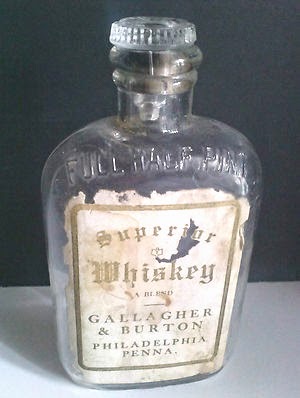 Unlike other whiskey wholesalers/rectifiers, Gallagher & Burton featured only a limited number of brands beside their flagship label.  Among them were “Superior Whiskey” and  ”Black Label,” the

latter shown below as reproduced on an ashtray.  The tray also displays the firm’s logo.  The partners had trademarked that branding illustration in 1906,  describing it as follows:  “The representation of two cross bands, two concentric circles circles thereon, between which appear the words “Gallagher & Burton Philadelphia, within the inner circle appearing the letters “G. & B.” and the numerals “1877.”

Of the partners, Gallagher appears to have been the entrepreneur.  When Ocean City, Maryland was being platted and developed he invested in real estate there. 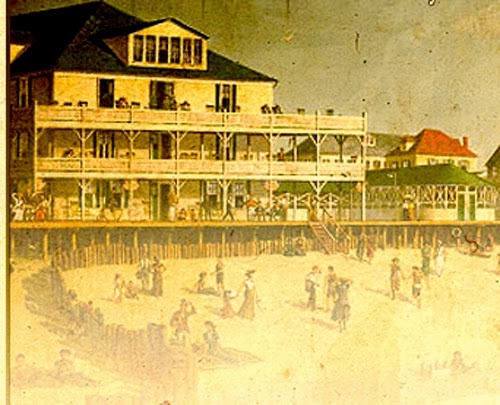 He was a stockholder in the Atlantic Hotel, shown here, for many years the premier hostelry in that resort town.  He also purchased two lots in town and opened a general merchandise store that prominently sold Gallagher & Burton Whiskey.  Gallagher also was prominent in the Philadelphia insurance business, serving as president of the Mechanic’s Insurance Company. That organization had been chartered by the State of Pennsylvania in 1854 and capitalized for today’s equivalent of $6 million. For a time Gallagher also was a Philadelphia insurance commissioner.  His banking interests included serving as a director of the Beneficial Savings Fund of Philadelphia.

Although Gallagher had investments in Ocean City, he built a spacious summer home for his family in Cape May, New Jersey, a resort town on the Atlantic that attracted many wealthy Philadelphians.  Shown here, the mansion featured a mansard roof reflecting the French Second Empire style.  The center entrance was flanked by a three story bay, second story porch, and large side verandah reminiscent of England’s Queen Anne architecture. The exterior displayed an abundance of American “gingerbread” millwork.  Its eclectic architecture defined it as a showy seaside manse,  The house still stands as a bed and breakfast. 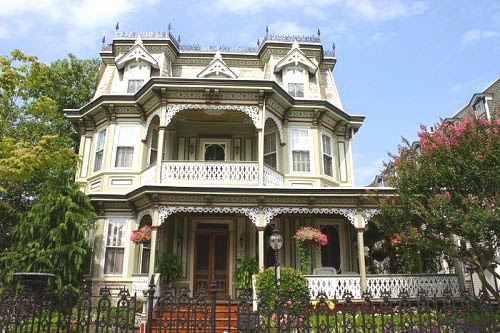 Both Gallagher and Burton seemed to have avoided census takers throughout their lives.
City Directories, however, tell us that in 1890 Charles was living at 1725 Master Street and Edward had his residence at 1512 Tenth Street.  During that period the liquor dealership was also located on Tenth.  In 1902 the company moved to 1204 Arch Street and in 1914 a second outlet  was opened at 1205 Cuthbert.   The coming of Prohibition caused both stores to close in 1918.

After Repeal, a Seagram Canadian subsidiary obtained the rights to the Gallagher & Burton name. 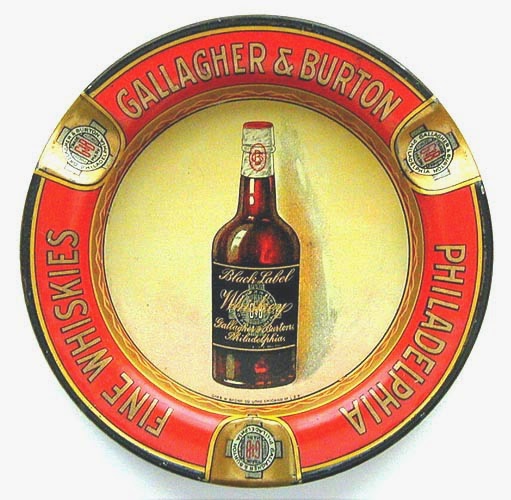 Trading on its national reputation for quality, the brand subsequently was marketed out of Baltimore, Maryland. That is how and where Gallagher and Burton came to be “well preserved.”  In 1945 at the end of World War II the company bearing their name issued an ad that purported to depict the founders.  By this time Gallagher would have been 106 and Burton 98.  The fact that both were dead proved to be no bar to the admen who featured them as very much alive and highly patriotic.

The message:  “Buy Victory Bonds.” The figure on the left, presumably Gallagher, faced toward an open door where a younger man in a homberg hat, presumably Burton, was flashing a wad of U.S. currency.    Gallagher:  “Victory, Mr. Burton, is what our boys brought us.  Backing this loan is the very least you and I can do in return.”   Burton emphatically agreed:  “What’s more,Mr. Gallagher we’re not giving.  We’re investing our money at interest in our own welfare.”   And, oh yes,  the ad additionally suggested that by choosing G&B whiskey “...All is well with your drinks.” 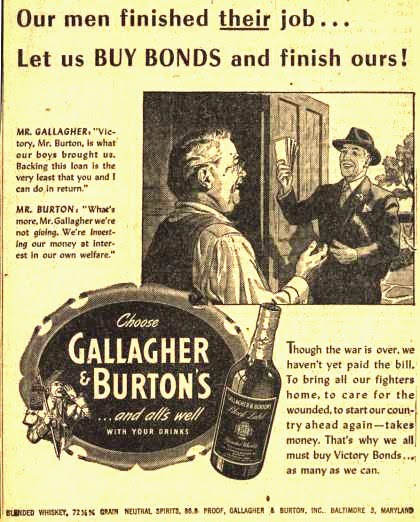 Despite the effort to keep  Gallagher and Burton “alive,”  if only in the minds of the drinking public,  the whiskey ultimately failed to find a strong consumer base.  G. & B. whiskey was taken off the market about 1960.  There may be a moral in the story:  Even the best preserved individuals and whiskeys have a shelf life.

Posted by Jack Sullivan at 7:51 AM