Leo Straus “Loved His Fellow Men” and Sold Them Whiskey 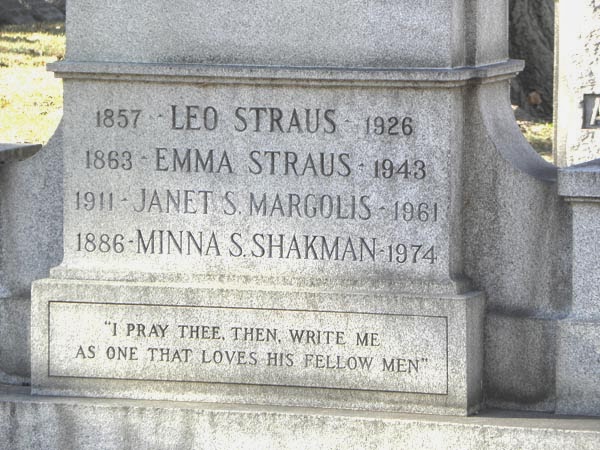 It  is unusual to begin a story about an individual by focusing on his grave marker.  For Leo
(Leopold) Straus, however, the quote on his headstone sets the theme for this vignette on his life.  The inscription reads:  “I pray thee, then, write me as one that loves his fellow men.”  Heeding that admonition,  this post about Straus, a Chicago whiskey man,  emphasizes his contributions of money and time to charitable causes as evidence of his orientation toward humankind.

Straus was born in 1857 in Ligonier, a small town in the northeastern part of the Indiana, the son of  immigrant German Jewish parents. Given his subsequent interest in agriculture, it is possible his father was a farmer and that he was raised on a farm.  Although Straus failed to show up in any U.S.

census,  he was recorded as engaged in the wholesale liquor business in Fort Wayne, Indiana, as early as 1878 when he would have been about 21 years old.  He was admitted to a partnership in a company called “Nathan Bros. & Straus,” described as wholesale liquor dealers and “redistillers,” that is, blenders and compounders of whiskeys.

About 1879 (dates differ)  Leo apparently decided that Fort Wayne, although considerably bigger than Ligonier,  was too small for his ambitions.   He moved to Chicago, Illinois. There he teamed with his younger brother, Eli, to open a liquor emporium at 203-205 East Madison Street.  They called it “Straus Brothers Company,  Distillers and Importers.” Leo was the president;  Eli was the secretary and treasurer.

Their business apparently was successful from the start.  Described in a 1900 business biography as “young men” (Leo was then 43 and Eli was 37), the publication extolled the prowess of the Straus Brothers:  “This firm is one of the most important wholesale liquor dealers in Chicago. It handles only the better quality of goods, principally those used for medicinal and sacramental purposes. It occupies three floors of the large business house at 203 and 205 East Madison Street. It is among the largest dealers in bonded goods in the United States, and is owner of a large distillery at New Haven, Kentucky; has in stock fifty brands of Kentucky whisky, a large line of Pennsylvania and Maryland ryes, and a full line of domestic wines...They employ seven traveling salesmen, and their goods are sold in nine different States. These gentlemen are prominent members of the "Chicago Liquor Dealers Association."

The assertion that Leo and his brother owned a distillery at New Haven, Kentucky, may have been exaggerated.   New Haven, a town in Nelson County, was indeed a center of the state’s whiskey industry, but my research into the histories of distilleries in or near New Haven has failed to disclose any Straus ownership.  More likely the brothers had a financial interest in one or more Kentucky

distilleries that provided them with raw whiskey to use for “rectifying” into their house brands.

There were a number of those labels, including “Monticello Club,” “Germania Club,” “Hecla,”  “Kenwood,”  “Syracuse,” “Roanhorse,” and “Wellington.”  Unlike many rectifiers,  Straus trademarked most of his brands,  Germania Club, Hecla, Solo, Sycamore, and Wellington in 1905;  Kenwood and Roanhorse in 1906.   They advertised Solo as “Best on the Bars.”  Germania Club was named after a well known gathering place for the German elites of Chicago.

Straus Brothers packaged their liquor in a variety of ways.  For wholesale customers, there were large four gallon jugs.  For consumers,  fancy ceramic  containers made by the Fulper Pottery of Flemington, New Jersey.  Their retail trade also included packaging brands like Monticello Club in glass containers from flask to quart sizes.   Stiff 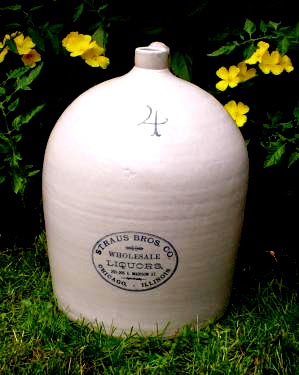 competition from other Chicago liquor dealers also occasioned the firm to distribute a variety of giveaway items to favored customers,  usually saloons and restaurants carrying their liquor.  The Old Cabinet bottle shown below was meant for back of the bar use, as a reminder to the boys on the stools. A fancy match safe embossed with the firm name would have been a gift to an owner or a bartender.  Even members of the drinking public might benefit from Straus Bros. largesse. The invention of printing on celluloid had made items like pocket mirrors inexpensive to produce with ads -- such has the one shown below for Old Cabinet Rye.

By 1913 Straus Brothers had adopted a new letterhead, one probably occasioned by a change in address.  Their company did not move,  the address changed when Chicago’s officialdom decided on a citywide street renumbering.  By that time both brothers had married.  Leo wed a woman named Emma.  His family included two children, a son and a daughter.

It was widely understood that Leo  Straus after a few years in the liquor business had amassed a fortune.  It was then he set out to prove his love for his fellow man.  His philanthropy began to be recognized as something out of the ordinary, not just for Jewish causes, even though those seemed uppermost in his mind, but also his generosity to many local and national organizations.   Possibly

because he had roots on tilling the land, at least two of his charities had farming

connections.   One was the Jewish Agriculturalist Aid Society of America.  That was an organization that bought land in the Middle West and settled Jewish farmers from Europe.  Leo Straus was a director of the organization. By 1903 the Chicago branch he led had recruited more than 230 families for homesteading on the Great Plains, principally in North Dakota.

Leo was also a contributor to the National Farm School, an institution that trained young Jewish boys in “practical and scientific agriculture.”  Located in Doylestown, Bucks County, Pennsylvania, the school had been founded about 1894 by Rabbi Joseph Krauskopf after a visit to a similar institution in Russia.  The institution was dependent on contributions from around the country.  Straus was a principal giver.

Straus also contributed to a program that  provided job opportunities to poor Jewish women in Chicago.  Employed by the organization, some twenty-five women sewed gowns, chemises, shorts, shirts, and other garments.  The products of their labors then were distributed to 400 Jewish families, estimated at 1,825 people, along with bedding, underwear, adult and children’s clothing.  Straus also was a

benefactor of the Michael Reese Hospital, a medical  facility made possible by a contribution from a Jewish real estate developer who died in 1877.  The hospital was open to all people regardless of race, nationality or creed.  When the Associated Jewish Charities of Chicago was founded in 1900 on the eve of Passover, Straus was a founding member and elected as a director.

None of his charity work, unfortunately, could changed the Temperance tide. With the advent of National Prohibition,  Straus was forced to close the doors on his liquor establishment.  At that time in his 60s,  he apparently retired.  His younger 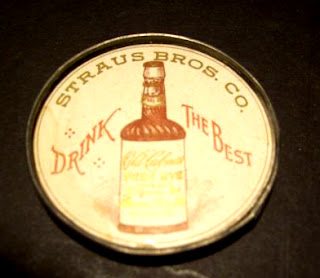 brother, Eli, went on to be the treasurer of a paper factory.  In 1926 at the age 69 Leo suddenly dropped dead.  In apparent good health he had gone to the annual banquet of the Indiana Society of Chicago, collapsed, and died.  With his widow and children mourning his passing, Straus was given a funeral at Sinai Congregation, where he had been a trustee and benefactor, and buried in Rosehill Cemetery.   One Chicago newspaper obituary remembered him as “a well known figure in the city’s business, social, and philanthropic circles.”

Although the eleemosynary history of Leo Straus gave good evidence of his “love of fellow men,” the citation carved at his grave site raises questions:  “I pray thee, then, write me as one that loves his fellow men."  The quote is from an English poem about a man named Ibrahim ibn Adham,  a Middle Eastern legendary king who renounced his throne and became a religious ascetic.  Today Ibrahim is reckoned one of the most prominent Sufi Moslem saints.  It apparently was a different day when a Jew could quote a Moslem on his grave stone.  Or perhaps it was just another example of Leo Straus’s love for his fellow man.