When James Miller’s “Chicken Cock” from Kentucky challenged John Miller’s “Game Cock” from Massachusetts,  the one-on-one battle was not fought within a cockpit of feisty roosters but in a court of law. Those chickens came home to roost in a dispute over whiskey trademark infringement. The conflict ended with one rooster defeated and  the proprietor “licking his wounds.” 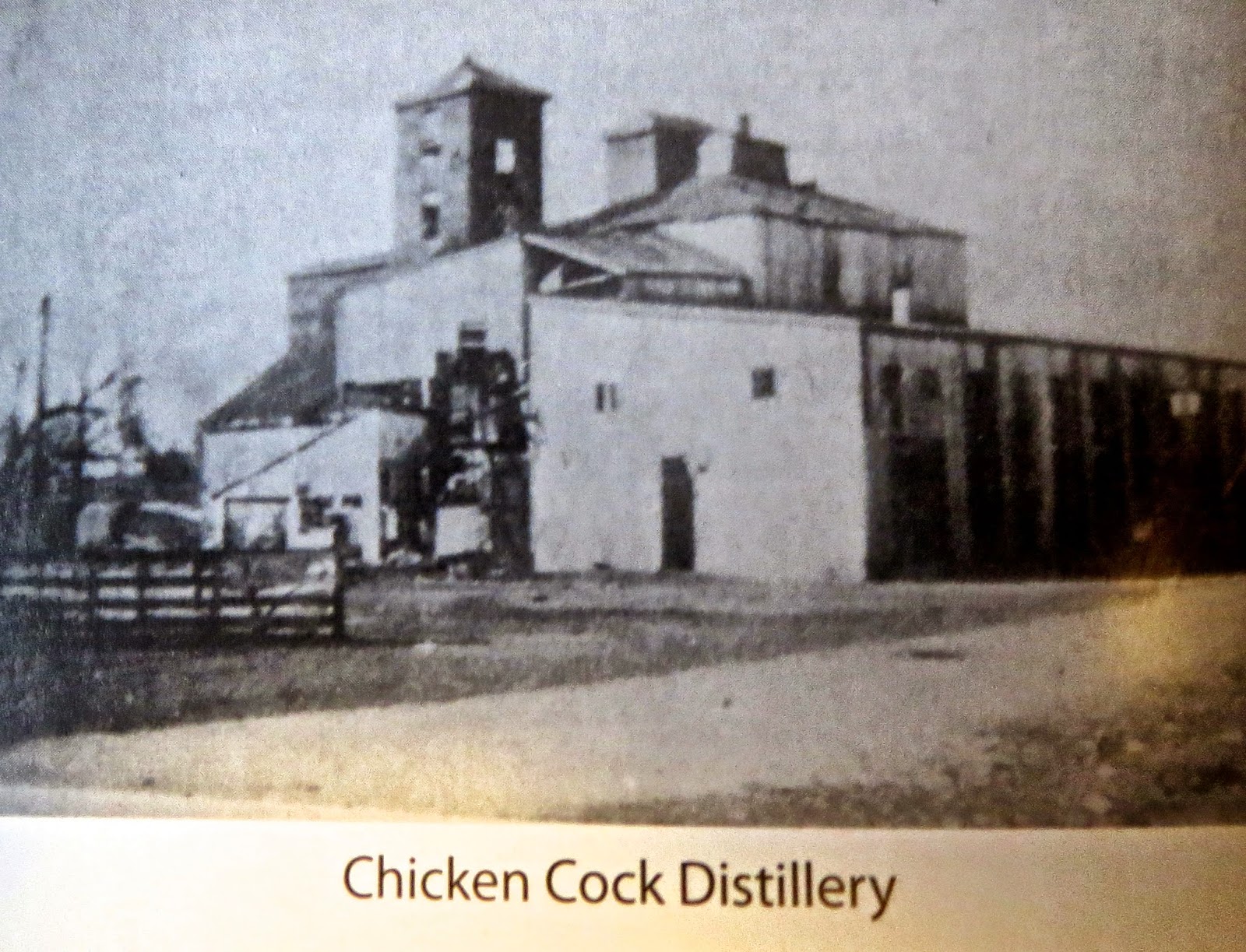 James Miller had been dead almost four decades when these events occurred but his name still was connected to the Bourbon County, Kentucky, liquor he had originated and named “Chicken Cock.”   When Miller died in 1860 he left several thousand dollars to George G. White, a man who had been a clerk at the distillery.  With partners, White bought the facility, operating it as the Chicken Cock Distillery, shown above. 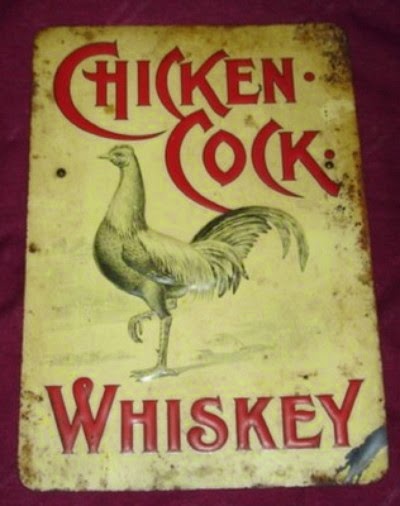 Soon it had a mashing capacity of 400 bushels and was turning out about 9,000 barrels annually.  In addition to making sweet mash whiskey under the Chicken Cock name, the distillery had the capacity to produce its own barrels and feed the spent mash to 500 head of cattle and 800 hogs.  About 1880 the name of the facility was changed to G.G. White Distillery and the whiskey became “J.A. Miller Chicken Cock.”   By 1886 White had expanded its mashing capacity to 600 bushels a day and boasted six warehouses capable of storing some 32,000 barrels.

By dint of vigorous advertising, Chicken Cock Whiskey now was being sold nationwide through a wide network of distributors,  including Kohn & Adler of Rock Island, Illinois; Peter Crowley of Boston, and — as shown in the ad above — Jacob Dudenhoefer of Milwaukee.  One California newspaper, in an 1870 news article discussing the reputation of Chicken Cock whiskey, claimed that it was a favorite with large dealers, selling in lots from fifty to fifteen hundred barrels.

The symbol of George White’s brand was a strutting rooster as displayed on tin signs mean for saloons and bottles meant for pouring from back of the bar.  As the Circuit Court of Massachusetts noted:  “This whiskey for more than 30 years has always been known in the trade as “Miller’s Chicken Cock Whiskey:  or “Chicken Cock Whiskey,” and has been noted for its high grade and uniform excellence; and this mark has been stamped on every barrel or package of the whiskey made or sold by Miller or his successor in the business.” 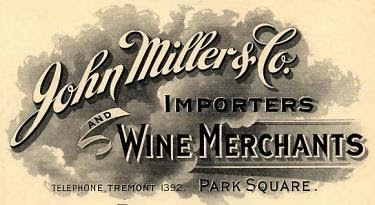 Off in Boston, John Miller, a major local liquor dealer, was taking note of this popularity.  Miller had founded his company in 1850 and operated it with considerable success for several decades at Boston’s Park Square. During this period Miller featured several brands of whiskey: "Calumet Rye,” “Elkwood,” “Overton,” and "Owl Gin.  Eventually he  brought his sons into the business.  William A. Miller appears on a company letterhead dated 1898 and Louis J. Miller is listed in directories after 1900.

Almost certainly noting the identity of his own surname and first initial with the Kentucky distiller, in 1887  John Miller hatched an idea to sell more whiskey.  He adopted brand names for whiskeys called “Miller’s Game Cock Bourbon” and “Miller’s Game Cock Rye.”  For a time Miller’s whiskey did not attempt close identification with Chicken Cock. Note the plain bottle at left.  Soon that mode of merchandising was abandoned.  Game Cock advertising, labels and embossed bottles began carrying a likeness of a rooster standing upright, often enclosed in a circle.  As the Massachusetts Court pointed out, a glance at the two marks indicated that John Miller & Co. had “taken bodily the picture or representation which forms the complainant’s trade-mark and appropriated it to their own use.” 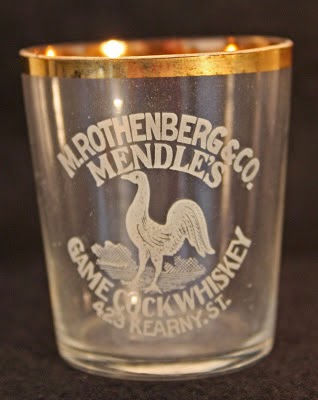 The Boston “copy cat” effort clearly met with success.  A bottle shown right with the rooster was issued by the Rothenberg Company of San Francisco, who also featured a shot glass with the standing chicken.   Other distributors for Game Cock Whiskey could be found on the East Coast and Midwest.  It must have been galling to George White and his colleagues that while Chicken Cock was straight bourbon whiskey,  Game Cock was a rectified blend, cooked up by the Millers in some back room of their Boston address.  Even more galling was that the difference became a part of Miller’s defense.  His lawyers claimed that because a barrel of “straight” whiskey needed two federal stamps and a rectified whiskey only one, that no one would ever be deceived.  The court dismissed the argument as specious.
For some months after Miller put his whiskey on the market, George White was blissfully unaware of what was afoot until 1889 when he found out and subsequently brought his suit in the courts of Massachusetts.  That in itself was a bold act.  The history of trademark infringement cases was that a complaint and subsequent granting of an injunction was seldom successful in the state in which the offender did business.   Politics frequently got in the way of a fair hearing.   Circuit Court Judge Colt, however, was not one to be swayed by local ties.  In his written opinion, one by one he swatted down John Miller’s arguments and agreed with White’s lawyers.  He granted an injunction to the Kentucky distiller.  In the cross-country rooster tussle, the Chicken Cock had bested the Game Cock. 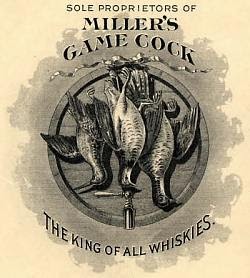 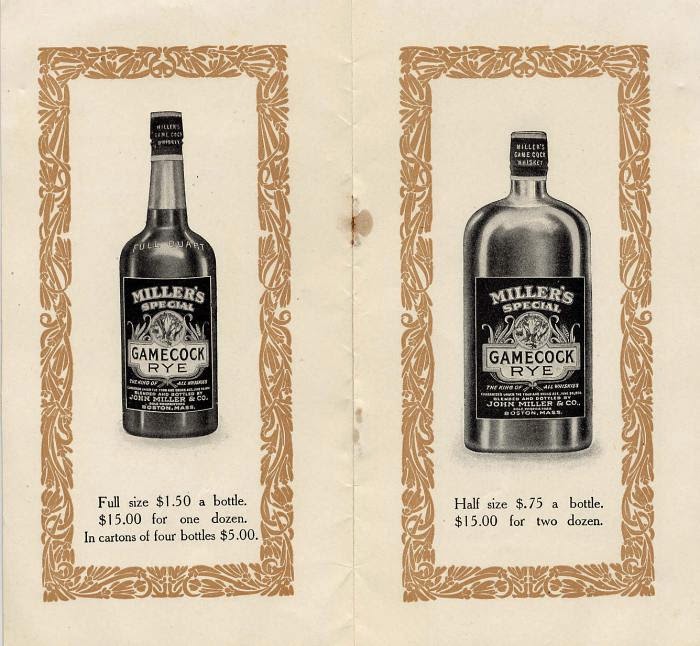 The injunction simply told John Miller that he must find other ways to illustrate his whiskey.  So he did.  The result was a change in the way he advertised Game Cock Rye.  Instead of the upright chicken, the birds were shown dead, presumably shot, hanging upside down from the front of a barrel.  Added was the motto:  “The King of All Whiskies.”  As shown right, that label was applied to full quart bottles and to pint flasks.   Now Miller’s Massachusetts birds could not be mistaken for Miller’s in Kentucky.

Within a few years, however, the court settlement meant nothing to either party,  Prohibition shut down both operations for the duration of America’s “dry” period.  Chicken Cock Whiskey was revived after Repeal, but a brand name only and under other auspices.

Posted by Jack Sullivan at 6:21 AM