The Beverage Legacy of Will and Glenna Joyce

Beginning with a Columbus, Ohio, liquor house and evolving into a major bottler of soft drinks, William and Glenna Joyce, a couple themselves with limited educational opportunities, over the past 57 years through the Joyce Trust have distributed tens of millions of dollars toward the college education of more than 800 students at Ohio State and Notre Dame Universities.

The story began in June 1873 when William Henry “Will” Joyce was born in Shawnee, Ohio, the first child of John, 25, and Anna, 19, Joyce, both the progeny of Irish immigrants.  Will would have five brothers and two sisters.  Shown above, Shawnee is village about 66 miles southeast of Columbus.  By the 1900 census the family had moved to the Ohio capital city.  John Joyce was recorded as a “day laborer” and William, now 25 and living at home, as a salesman. 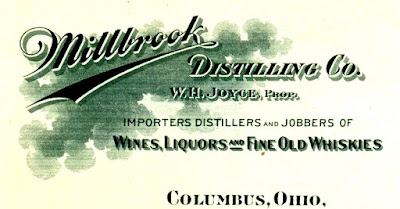 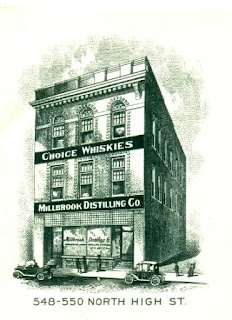 Within a few years, Joyce had established himself as a up-and-coming Columbus businessman.  About 1909, with a partner, he founded the Millbrook Distilling Company, described as “Importer Distillers and Jobbers of Wines, Liquors and Fine Old Whiskey.”  It was located at   548-550 High Street, the three story building shown here.  Milbrook Distilling also had a presence across the Ohio River in Covington, Kentucky, at the corner of Front and Scott Streets. 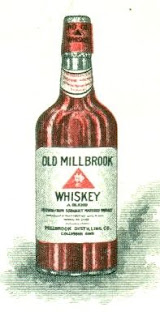 Joyce was not a distiller but a “rectifier,” blending whiskey purchased from distilleries in Ohio and the adjacent states of Kentucky and Pennsylvania to achieve a desired smoothness, color and taste.  His flagship brand was “Millbrook Whiskey,” openly advertised as a blend.  He sold it in both quart and flask-sized labeled glass bottles.

The young entrepreneur’s efforts did not end with his liquor interests.  In 1905 he had join with a fellow Irishman, George Francis Mooney, in founding a new Columbus brewery, called the Washington Brewing Company.  Mooney oversaw the construction of the brewery at West Second Avenue and Perry Street, shown below, and upon its opening became general manager.  Joyce was vice president. 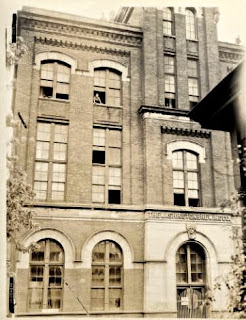 Joyce’s ventures into liquor and beer were coming at a time when markets for alcoholic beverages was shrinking in Ohio and surrounding states as a result of “local option” laws that allowed counties and towns to vote themselves “dry.”  Moreover, clamor for complete prohibition in Ohio was rising.  The canny Joyce may have sensed the trend and early in the new century created the Wyandotte Pop Company to make and sell soft drinks.

In the meantime, Will had married.  His wife was Estelle Clair (Smith?), a native Ohioan who was eight years younger than her husband.  They had no children.  The 1910 census found the couple living in Columbus with Estelle’s sister in residence.  In bad health as the century progressed, Estelle died in September 1914 at the age of 33 and was buried in St. Joseph Cemetery in Lockbourne, Ohio.

Meanwhile Glenna Stengel, the daughter of Martin and Nellie McCourt Stengel, was learning the craft of seamstress.  Born in 1890 in Columbus into a family of modest means, at 18 she married a man named Clarence Burger but divorced him after eight years.  How she then met Joyce is unknown but three years after his first wife’s death, Will married Glenna in 1917 in a Catholic church, officiated by Rev. Father McDermott.  Although the wedding license states that Burger was dead, another record has him living until 1976.  If he was known to be living, the couple could not have been married in the church.

Despite Glenna’s lack of formal education, Joyce had made a good decision.  She proved to have a penchant for business.  When the coming of statewide prohibition forced the shutdown of the Millbrook Distillery and the Washington Brewery, Joyce started two new enterprises devoted to soft drinks, the Joyce Products Co. and Beverage Management Inc.  Joyce brought Glenna into company management.

Now the emphasis became 7-Up, the lemon-lime-flavored soft drink with which the Joyce family name had long been associated.  While the exact relationships are fuzzy, Will Joyce early on was involved in producing this carbonated drink, owning bottling plants in both Columbus and Norwalk, Ohio.  Shown here are green 7-Up bottles that carry “Joyce”  embossing.  Like Joyce’s liquor business, his venture into soft drinks proved very profitable.

Will Joyce died at the age of 60 in November 1933 and was buried in St. Joseph’s Cemetery in a plot adjacent to his first wife.  Having no children, his estate counted in the multi-millions went to Glenna.  She also became a major stockholder and First Vice President of Joyce Products Company, a position she would hold for several decades. 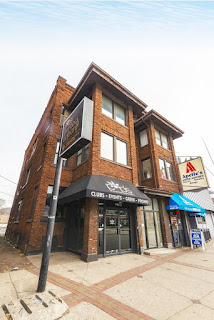 Whether the idea for the Joyce Trust and the Glenna R. Joyce Scholarships originated with her or had been agreed earlier with her husband is unknown. Nor is it entirely clear why she selected to assist Ohio State and Notre Dame since the Joyces had no direct ties to either university.  For a number of years, however, they had lived in the building shown here, directly across from the OSU campus.  As a Catholic, the idea of assisting a leading church university like Notre Dame may have appealed to Glenna.

Candidates for the Joyce scholarships are limited to residents of Delaware, Fairfield, Franklin, Licking, Madison, Pickaway, and Union Counties, Ohio.  In addition candidates “must exemplify superior academic potential, potential contribution to the university, and high character; must demonstrate financial need.”  The scholarships pay for the full cost of attendance for four years and are split evenly between Ohio State and Notre Dame.  Because the latter as a private school is considerably more expensive, there is a monetary imbalance. 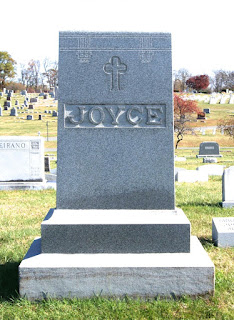 After Will’s death Glenna moved out of Columbus to Upper Arlington, a middle-class suburb.  She died at home there on the day before Christmas in 1960.  She was buried next to her husband in graves graced by a large monument in St. Joseph’s Cemetery.  Following the dictates of her will, the Joyce Trust and Glenna R. Joyce Scholarships were established the following year.  As of 2017 its assets were in excess of $28 million and the number of recipients annually has been increasing.  The Joyce Trust is administered by the National City Bank of Columbus. 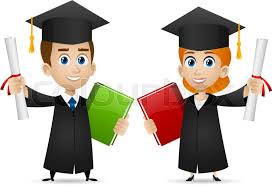 Posted by Jack Sullivan at 7:45 AM