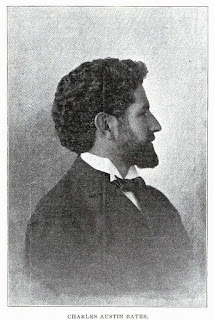 In any Advertising Hall of Fame, Charles Austin Bates, left, deserves a statue.  Beginning in the late 1880s, writing in the publication “Printer’s Ink,” Bates judged American advertising for the effectiveness of the sales pitches and was instrumental in its improvement.  In 1898, Bates happened on competing ads from two Vicksburg, Mississippi, whiskey dealers, John Brennan and Wesley Crayton.   As a result, he pitted them against each other for quality and delivered his verdict.

Bates had clipped two long advertisements from a Vicksburg newspaper that he believed indicated the whiskey business in town was good.  Which ad was more likely to draw customers?  What Bates almost certainly did not know was that the social divide between Brennan and Crayton was immense.  In “Jim Crow” Mississippi, Brennan was white;  Crayton was black.

John Brennan was born in Scotland of Irish parents and was brought to the U.S. as an infant.  Apparently unmarried, the 1900 census found him at the age of 49 living on Walnut Street in Vicksburg’s Fourth Ward at the home of his brother-in- law, Felix Hoerner.  Hoerner apparently was working with Brennan in the liquor business located at 330 South Washington Street, a major Vicksburg commercial avenue, shown below. 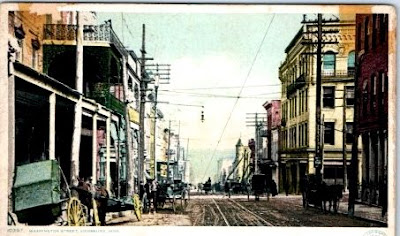 In his advertising Brennan claimed that his was “The Oldest Liquor House in Mississippi,” established in 1868, only three years after the end of the Civil War.  Since he would still have been a teen, it is likely that he inherited or purchased an existing whiskey business.  Brennan also claimed to be the “The Cheapest Liquor House in America on Delivered Case Goods.”  Note the claim — not just cheapest in Mississippi, but America. 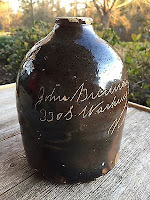 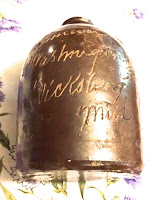 Brennan was not a distiller but a whiskey wholesaler and rectifier, someone blending whiskeys made elsewhere and decanted into his own containers for sale.  He was notable for having used stoneware covered in brown “Bristol glaze” with his name scratched in the surface.  Because of the method used, each jug was individualized, as shown here. 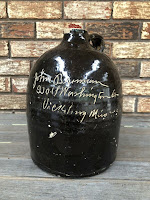 They ranged in size from quarts to two gallon containers.  With time and technological improvements Brennan switched to a salt-glazed stoneware with a cobalt blue top and his name and address stenciled across the body, as well as using glass bottles.

Just off Washington Street at 507 Veto Street, Wesley Crayton was running a saloon and liquor store.  Although he was listed in city directories just below Brennan, there was a “c” behind his name that designated him as “colored.”Crayton had been born in 1859 in Mississippi of native-born Mississippians and had married in 1882 at the age of 23.  His wife, Henrietta, was from Virginia.  The 1910 Federal census found him living with her, a boarder, and a 75-year-old man listed as a servant.

As a successful businessman, Crayton had stature in the black community. In 1908 he was named a delegate to the Republican national convention, shown below, to select a successor to President Theodore Roosevelt.  Since the event was held in Chicago he would have ridden a train there, some of the time in the South in a segregated “Jim Crow” car. 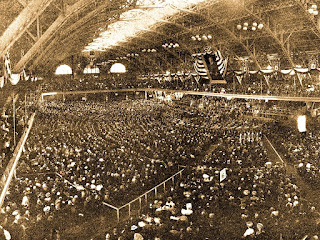 Despite discrimination, Crayton sold liquor to blacks and whites alike.  Like John Brennan, he advertised extensively in Vicksburg newspapers like the Herald, challenging the Irishman by claiming that his was “The Oldest Whiskey House in the City.”  He would sell whiskey by the barrel or half barrel, he advertised, and “Wesley Crayton will fill your jug for you.”

This brings us back to Charles Austin Bates seizing on ads by each whiskey man and providing his analysis and judgment.  Both Vickburg dealers opened their ads with essays.  Brennan headlined his, “Whiskey Man Talks!”  There followed a screed on drunkenness:  “A man who is drinking for the mere brutal indulgence to satisfy an abnormal appetite, loses his good temper, watch, money and any other valuables he may have concealed on his person….”  Brennan dismissed that lout as a desirable customer in favor of “a sober, sensible man” who will appreciate that the Irishman sold “nothing but the best” brands of liquor.

Crayton began his ad by commenting on “The Peace Commission” that was arranging a final settlement with the Spanish government after its loss to the United States in the brief Spanish-American War.  He linked the Commission effort to the performance of duty and saw the current times (ignoring “Jim Crow”) as “a flourishing age of advancement” in which he himself had demonstrated “especial justice” in his conduct of the jug trade in Vicksburg.

Brennan followed his essay with a list of the liquor brands he featured with prices and ended with a special endorsement of his “Eight Year Old Brennan’s Choice” whiskey, likely a blend mixed up at his Washington Street establishment.“One drink to a well person,” he claimed, “is a guarantee of six months longer life of usefulness to the community in which he resides.”  In concluding his ad, Crayton headlined “Honesty is the Best Policy” with the assertion, countering Brennan, that:  “Wesley Crayton has the oldest Whiskey House and Jug Trade in the City of Vicksburg” and that he marketed to one of the largest territories for liquor sales in Mississippi.

Bates then provided his 1898 analysis of both ads, in keeping with his well known basic creed of advertising: “Show price.  Use simple English.  Never overestimate the consumer’s IQ.”  Finally and most important:  “Be truthful.”  He found Brennan’s lengthy discussion of drunkeness “questionable” but liked his pricing of brands, despite wondering how the dealer reconciled carrying nothing but the best whiskey with selling some for $1.50 a gallon.  Bates did not comment on the Irishman’s claim that drinking his “Brennan’s Choice” added six months of useful life.

Crayton’s ad puzzled Bates:  “All his talk about the Peace Commission doesn’t seem to have much of anything to do with jug promotion in Vicksburg.”  Bates also noted of Crayton that:  “He starts out in the first person singular, switches over to third person singular, and then in the last three lines he takes a hack at the subject in the first person plural.  Possibly that’s the effect of writing about whiskey.  The longer a man dallies with whiskey, the bigger and more numerous he thinks he is.”

In rendering his final judgment to his national audience, Bates gave the nod to the Irishman:  “Mr. John Brennan is distinctly modern in his methods.”  As for his rival:  “Mr. Crayton has made a desperate effort to break away from the old-style ad but he hasn’t succeeded.”

Although the assessment of Charles Austin Bates may have given Brennan some temporary bragging rights, both men would soon be facing reduced markets as Mississippi localities increasingly went “dry” under local option laws. When a statewide ban on making or selling on liquor was enacted in 1908, both Brennan and Crayton were forced to shut their establishments.  Brennan seems to have retired, spending his latter days rooming at Vickburg’s Royal Hotel.  Crayton in 1910 was recorded as running a billiard parlor and later working for a lumber company.

Note:  Although it is clear that Wesley Crayton catered to the “jug trade,” I have been unable so far to find containers with his name on them to complement those of Brennan.  Crayton was one of several African-American liquor dealers in pre-Prohibition Vicksburg.  Vignettes of two others, Jerry Blowe (April 6, 2013) and N.C. Cannon (March 26, 2018) also can be found on this website.

Posted by Jack Sullivan at 7:37 AM