Foreword:   Having provided two recent posts on whiskey men who were heavily engaged in building up their communities, I think it appropriate here to feature three who defied authority in states from North Carolina to Wisconsin to Iowa.   Although the three are linked by their clear distain for government controls and the officials designated to enforce them, each had his own way of dealing with them. 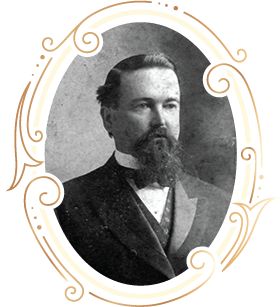 “Old Nick.”  It is a common term for the Satan, the Devil, Beelzebub, or what ever you call the evil spirit.  Nicholas Glenn Williams, a North Carolina whiskey man, not only ran a distillery business called the “Old Nick Williams Company,” but demonstrated repeatedly during his life, that he truly had the “Old Nick” in him and indeed was capable of “raising Hell.”

Established in the distilling business at Panther Creek plantation, shown below, Williams was constantly harassed by temperance forces in North Carolina, for a time outsmarting them..  Early in the 1900s he got crosswise with the Federal Government by failing to pay his liquor taxes.  The story is that during a visit to nearby Winston-Salem, North Carolina, Williams was confronted by a  revenue officer who accused him of tax evasion.  A powerfully built man, Williams is said to have pulled the official out of the Federal Building and onto the street where he beat him with a buggy whip.  So potent was Nick’s political clout that he was never charged or arrested for the assault. 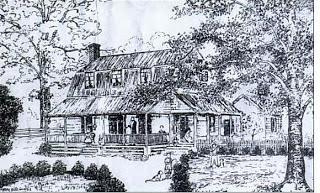 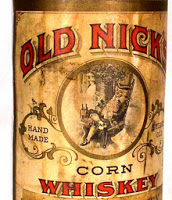 As everyone knows, however, the Feds are not easily discouraged.  Williams was hauled into Federal Court for failure to pay his rectifier tax. In addition to distilling spirits he also was rectifying (blending) them for sale.  Already paying a stiff federal tax on each gallon of whiskey he was distilling, the law directed him to pay the government to blend them, a levy he and other rectifiers bitterly resented.   Found guilty. Williams was ordered to pay a fine of $5,000, more than twenty times that amount in today’s dollar, and assessed court  costs.

Ever the stubborn rebel,  Williams fought the decision, claiming that the original Federal Circuit Court had erred in setting the payment date and thus nulled the verdict.  He claimed to owe nothing. First heard in Federal Appeals Court, the case eventually made its way to the United States Supreme Court. That body in 1905, rendered a decision that, in effect, told Old Nick to pay up.

Soon after, Williams was out of the whiskey trade.  In 1908 North Carolina by a substantial vote of the populace banned all alcohol production and sales.  The Williams distillery was forced to close.  Some of his work force moved on to Kentucky, reportedly taking the stills with them.  Panther Creek reverted purely to farming.  In the 1910 census, Williams would list his occupation as running a horse farm.  He was 45 years old. 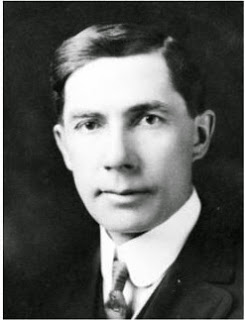 William Bergenthal was well known for his ferocious temper.  The Milwaukee, Wisconsin, distiller and liquor dealer, it is said, once physically threw a deputy sheriff out of his office who had come to collect a bill because the lawman made a remark impugning his honesty.  Bergenthal would have been well advised to do the same when corrupt Federal revenue officers came looking for bribes.  He did not and thus became implicated in the giant 1870s criminal conspiracy known as “The Whiskey Ring.”

When Milwaukee distillers found that Chicago whiskey was selling in town for $1.15 a gallon, they quickly understood that the Illinois distillers were not paying the tax but paying off the tax collectors.  Some Milwaukee whiskey manufacturers, including William Bergenthal, were enticed by crooked revenue agents to join them.

In 1875 the Department of the Treasury conducted a series of raids in Midwestern cities, arresting distillers and liquor wholesalers.  Bergenthal was among them.  Apparently taking the fall for William was his brother August who, with another company employee, spent four months in the Milwaukee County Jail for “misrepresenting the company’s alcohol tax records.” 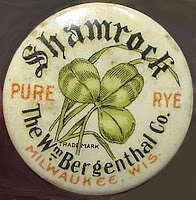 William Bergenthal himself was far from being off the hook.  In 1876 the U.S. District Attorney brought an indictment into Federal Circuit Court in which the Milwaukee distiller was cited as a material witness.  The government charged that he had met with a group of co-conspirators two month after the raids to plot with them the theft and destruction of incriminating documents that were believed held by Federal authorities in Chicago.  For this heist the alleged thieves demanded $50,000, the present day equivalent of $12.5 million.

If the government had been able to prevail in this case, it was only a matter of time until Bergenthal and other colleagues would be in the dock.  The Court, however, ruled that the theft had never gotten beyond the discussion phase and that “some act must actually be done” to constitute a conspiracy.  While far from exonerated, Bergenthal continued to be a major figure in Milwaukee business circles until his death in 1909.

To suggest that Kinsey “Stormy” Jordan was a complicated character is an understatement.  The famous Prohibitionist preacher, Billy Sunday, hailed him “as the only liquor owner who told the truth about booze.”  On the other hand, Jordan was described by another anti-alcohol zealot as “a man, known the State and nation over for his shameless, law-defying wickedness….”  Stormy’s reputation spread far beyond Ottumwa, Iowa, and rendered him the subject of national attention and controversy. 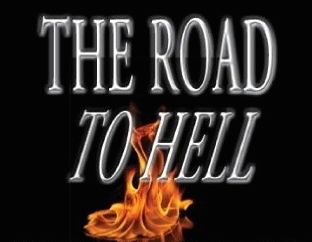 Gaining the respect of Prohibitionist Billy Sunday, shown here, for calling his saloon “The Road to Hell,” Jordan prospered in his Ottumwa drinking establishment.  Despite the Iowa legislature voting the state “dry” in 1881, he filed a suit in Federal Court and continued to run his saloon.  Local authorities regularly jailed him only to have sympathetic judges let him go.  With his releases and the continued operation of his saloon — Stormy’s defiance made headlines across America.

Almost overnight Jordan became a national figure, attacked by some, lauded by others.  Appleton’s Magazine opined:  “Let us not do injustice to “Stormy” Jordan, in some ways the most picturesque figure that emerged from the dust of the fight and the most irreconcilable fighter of them all….Jordan kept his place wide open day and night, paying penalties, fighting, and gaining national fame as a consequence.”  Jordan continued to run his establishment for years in Ottumwa, shown below, as the only operating saloon in Iowa, while his case toiled through the federal judicial system all the way the way to the United States Supreme Court. 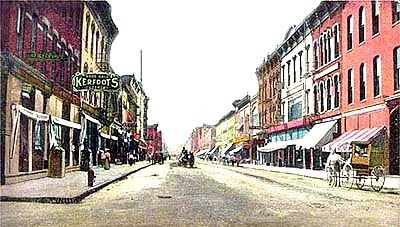 After the Supremes decided against him, however, Jordan decided on a drastically different course.  According to the Ottumwa Courier, he called the newspaper to say he would succumb to the inevitable and quit the saloon business.  Perhaps remembering his salute from Billy Sunday, Stormy Jordan became a traveling Methodist evangelist. Reported the Wines and Spirits Journal:  “His appeals now to his old associates are eloquent and hundreds are flocking to hear him.”

Each of these whiskey men were notable for their defiance of law and government officials —  two of them employing bodily violence. Yet all three managed to avoid any prolonged incarceration for thumbing their noses at authority and, as they aged, each of them settled down to less contentious occupations.

Posted by Jack Sullivan at 7:26 AM