Dictionaries generally define a “missionary” as “a person sent on a religious mission, especially one sent to promote Christianity in a foreign country.”  That had been my understanding until my research on Chicago liquor dealer Louis Abel took me to a court case in which the word “missionary” assumed a whole new meaning. 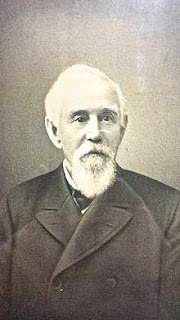 First, some background:  In 1918 Hiram Walker & Sons, a U.S. and Canadian distilling company and the maker of “Canadian Club Whiskey,” filed suit against Louis Abel, along with his brother Joseph, for infringement of trademark, simulation of labels and direct fraud in refilling Canadian Club emptied bottles with their “imitiation” Canadian whiskey.  Walker, shown here, was assiduous in taking to court any whiskey outfit that seemed to be infringing on his trademarks.

Circuit Judge Baker, presiding in the Federal District Court of the Northern District of Illinois, obviously approached the case with a great deal of relish, providing his written opinion with a flair unusual for federal cases.  Baker was particularly intrigued by Abel’s “established sales methods” for promoting his liquor at the expense of the Walkers.  He noted that numerous men were employed by the Chicago liquor firm to go to saloons throughout the country and “puff” the house liquors, so that subsequently their salesmen and jobbers would find their way prepared for them.  “In the liquor world these puffers are called ‘missionaries,’” the judge asserted.

These so-called “missionaries” exclusively were men — women generally were not allowed in drinking establishments — who went from saloon to saloon to ask for an Abel labeled whiskey.  When told the saloon did not have it, they would raise a fuss, either ask the proprietor to get it or leave in a huff.  In a day or two Abel’s salesman would appear to take an order.  In other words, these missionaries were not asking for a reform of religious beliefs but for a switch in brands of booze. 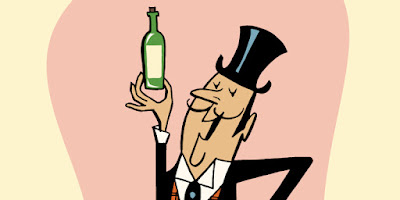 Two of those whiskey emissaries were in the courtroom to testify for the Walkers.  They gave enthusiastic accounts of their success as missionaries to achieve “conversion” from Canadian Club to their client’s erzatz product.  Judge Blake was not impressed:  “…The testimonies of Missionaries Craig and Blake is discredited.  They in fact were not the such glowing successes as boosters as they pictured themselves….It is easy to see their tendency to exaggerate.  They might not hesitate to lie…”  In the end, however, Judge Blake found their testimony sufficiently credible to consider, given the dubious accounts of other “…missionaries, salesmen, and bartenders, who testified….” for Abel and co-defendants.

In the final court document under “Words and Phrases,”  a new definition emerged:   “The term “missionaries,” as used in the liquor trade, applies to men employed to visit saloons throughout the country and puff liquors of a particular manufacture, so that salesmen of wholesalers and jobbers will find the way prepared for them.”

Judge Baker opined that he found the testimony of two private detectives who testified against Abel more credible than the witnesses who spoke for the Chicago liquor dealer.  Baker found him guilty as charged and issued an order to cease his trespasses against Hiram Walker & Sons.  The judge did not assess monetary damages.

Louis Abel was the son of Henry and Ellen Abel, born in Baden, Germany, about 1864.  When he was just a child, his parent emigrated to the United States bringing their five sons with them.  The Abels settled in Chicago where the father found work in a lumber yard.  Although the eldest son, John, ultimately was employed as a baker, the second, Charles, became a whiskey dealer and saloonkeeper.  As soon as he had achieved some maturity, Louis left school and joined Charles in his establishment as a bartender. 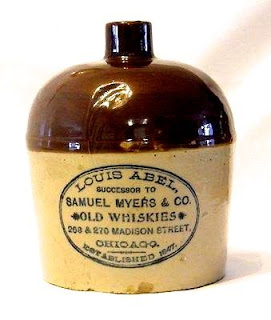 At some point Louis made a connection with a longtime Chicago liquor wholesaler named Samuel Myers who claimed his firm had been founded in 1847, although it first showed up in Windy City business directories in 1860.  Although Myers at times claimed to be a distiller, in reality he was a “rectifier,” compounding his own brands — one of them “Brown-Red Bourbon.” Samuels Myers & Co. initially was located at 276 Madison Avenue, moving a decade later to 268-270 Madison Avenue where it spent the next four decades.

How Abel hooked up with Myers is not clear but by 1904, Louis was advertising himself as “successor to Samuel Myers.”  Abel sold his whiskey in a series of stoneware jugs that carried a standard label that advertised:  “Louis Abel, successor to Samuel Myers & Co., Old Whiskies, established in 1847” and listing the same address as the Myers firm.  That address also showed up on an amber flask embossed with Abel’s name.

For his ceramic jugs Abel turned to The Red Wing Potteries of Red Wing, Minnesota.  That company, founded by a German immigrant named John Paul, had become renowned for the quality of its salt-glazed, hand thrown, kiln-fired items and for the crisp lettering of its under-glazed labels. 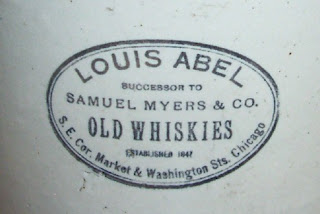 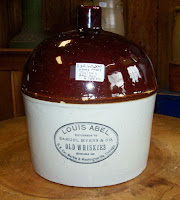 Abel’s jugs, in sizes from one to two gallons, indicate a preference for two-toned containers, with brown Albany slip tops and spout and plain stoneware bases.  Red Wing jugs likely were more expensive than other ceramics and today ceramic items of pre-Prohibition vintage from the pottery fetch fancy prices. 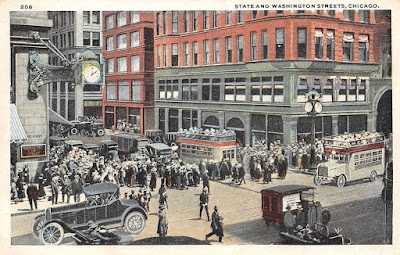 By 1911, Abel had moved from his earlier location to the southeastern corner of Market and Washington Streets, near the Chicago intersection shown here.  That new address was added to the company Red Wing jugs.  Beginning about 1908, according to court records, Abel began to compound and sell “Canadian Type” whiskey, ostensibly similar in proof, color and flavor to Hiram Walker’s Canadian Club.  Missionaries and salesmen then were employed to boost and sell Abel's faux Canadian in bulk to retailers whom they knew would use it to refill Walker’s bottles, “the brand being practically unknown to and never called for by consumers,” according to Judge Baker. 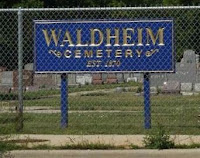 This dubious and illegal practice apparently proved to be quite lucrative to Abel until the Walkers’ 1918 lawsuit.  Subsequent publicity about scheme, however, seemingly led to the firm’s demise.  The same year that Judge Baker accused it of “direct fraud,” the Louis Abel liquor house disappeared from Chicago business directories.  Seven years later Louis died and was buried in Chicago’s Waldheim Cemetery.

Note:  This blog contains two other articles dealing with Hiram Walker’s court actions against trademark infringement.  On April 16, 2016, I posted on Walker bringing down Charles Klyman, another Chicago liquor dealer, and, on December 4, 2017, his less successful campaign against the Turner-Look Co. of Cincinnati.

Posted by Jack Sullivan at 6:32 AM