Whiskey Men — From Booze to Banking

Foreword:  The numbers of distillers, liquor wholesalers and saloonkeepers who turned to banking sometime during their careers is legion.  But it should not be too surprising.  Selling alcohol could be a very lucrative profession and many whiskey men had ready cash for investment.   Banks proliferated during the latter half of the 1800s and these gents had ready money to take advantage of the opportunities.  Some continued their liquor interests while engaging in the financial world; others turned to it when prohibitionary forces shut down their liquid operations.  Out of the many I have profiled, four men have been selected to illustrate the various paths from booze to banking. 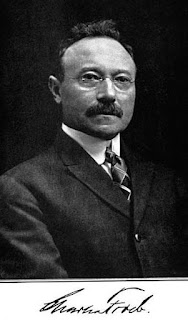 Charles Froeb, an immigrant to the United States as a teenager, founded a highly successful liquor business in Brooklyn and used it as a springboard to an equally successful career in banking.  While other whiskey men moved into banking once Prohibition forces shut them down,  Froeb, shown here, embarked entered the financial world as a parallel career.

Born in Germany in 1857 and brought to the United States as a youngster, settling in Brooklyn, Froeb spent eleven years working for a New York liquor house before striking out on his own, inn 1883 founding the Charles Froeb Co, wholesale liquor dealers.  Success came quickly. During the late 1880’s he engaged a well-known New York architect to build him a mansion in the Bedford Stuyvesant district of Brooklyn.  It is shown here. 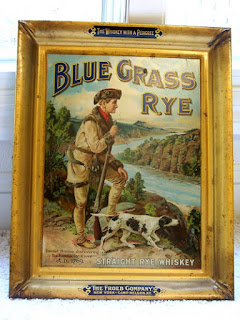 Froeb’s flagship brand was “Blue Grass Rye” that he sold in ceramic jugs and glass bottles. He advertised it heavily, emphasizing its medicinal uses, asking “physicians and consumers” to note such qualities as “very digestible,” “very nourishing,” and “entirely natural.”  Like many of his competitors, Froeb issued color lithographed signs for saloon customers. Froeb’s depiction of Daniel Boone, advertising Blue Grass Rye stands out. Even as he was prospering, Froeb perhaps anticipating Prohibition, was embarking on an alternative career. During the early 1900s he became a vice president of the German Savings Bank of Brooklyn.  By 1914 he had achieved the presidency.  This financial establishment merged several times and each time Froeb emerged at the top of bank management. He ultimately became president of the Lincoln Savings Bank, shown here, a post he held until retirement.

Meanwhile the original source of his wealth and business prestige had been shut down by the dictates of National Prohibition.  When he died in 1946 at the ripe old age of 89, Froeb could look back on a career that brought him from a teenage immigrant, speaking only a foreign tongue, to the top of the New York City financial world, living in one of Brooklyn’s most elegant mansions. The function of a “breaker boy” in mining was to break coal into pieces and sort those pieces into categories of nearly uniform size, a process known as “breaking."  The individual also chipped away any impurities that might be clinging to the coal.  It was hard, low-paying labor.  How Michael Bosak went from breaker boy in a Pennsylvania mine to proclaiming himself “The Richest Slovak in America”  is a story of brains and initiative.

Born in 1870 in Saris, a town now the Slovak Republic, Bosak immigrated to the U.S. about 1887, settling in Northeastern Pennsylvania.   After a few months he left mining and worked for several liquor merchants, taking orders and delivering merchandise.  Frugal in his habits, Bosak saved sufficient money to open his own liquor store in Hazelton in the 1890s.  When it prospered he opened a saloon called Glinsky’s Tavern in nearby Olyphant, Pennsylvania, and subsequently a branch liquor house in Scranton. 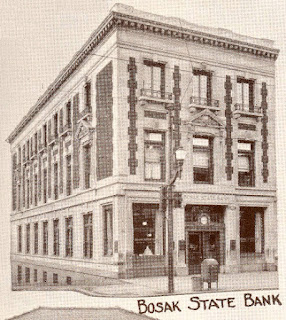 Bosak's Growing wealth allowed him to pursue other business interests.  Early on he moved into  banking.  The force of his personality led other Slovak immigrants to trust him and seek his help in purchasing steamship tickets, exchanging foreign currency and making small loans. Bosak established  private bank in 1897 that grew into the Bosak State Bank of Scranton by 1915.  In time he also became president of the Miners Savings Bank of Olyphant and the Trust Company of Wilkes Barre.  Bosak's signature could be found on U.S. backed bank notes.

Once the self-proclaimed “richest Slovak in America,” Bosak saw his business empire crumbling in 1929 with the advent of the Great Depression. His banks faltered and finally in 1931, failed and closed.   His earning of a lifetime were virtually wiped out.  Despite these setbacks, a biography of his life was entitled: “Michael Bosak:  An American Banker from Saris.”

The Muehleisen, William Sr. and William Jr., father and son, were proprietors of one of Washington, D.C., best known and most prosperous liquor businesses until Congress in a fit of political correctness voted the District  “dry” and the son gravitated to running one of the more unusual banking institutions in the history of the Nation’s Capital. 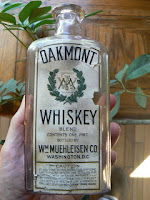 About 1867, in the wake of the Civil War, Muehleisen Sr. struck out on his own, establishing himself as an importer and dealer in foreign and domestic wines and liquors at 918 Fifth Street, NW, in the District of Columbia.  The firm's flagship brand was Oakmont Whiskey.  For the next fifty years the Muehleisens ran a highly respected, very profitable, liquor house until William Jr. was forced out of business when Congress voted D.C. “dry” in 1917. 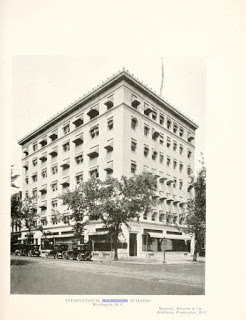 Muehleisen’s  transition from liquor to liquidity seems to have been an effortless one. He founded a bank.  A 1921 D.C. business directory listed him as president of the Mount Vernon Savings Bank, located in the International Machinists Building at 9th St. and Mount Vernon Place, N.W.. shown here.  As related in a historical account of D.C. banks, Muehleisen’s financial institution was the first U.S. bank in which a labor union owned a large bloc of the stock.  Known as a “labor bank,” with a mandate to benefit the working class,  this institution provided a higher return on worker money than other banks, namely, three percent on savings and four percent on certificates of deposit. The bank also worked closely with credit unions, holding their deposits and extending loans
to them.

Even after relinquishing the presidency of Mount Vernon Savings, Muehleisen Jr. stayed on as a director, listed as late as 1828 among their number.  The coming of the Great Depression, however, had a negative effect on this unusual financial institution when many small borrowers were forced to default on loans. The bank went out of business in the early 1930s.

Alexandria was a Virginia town with strong Confederate sympathies that greatly resented Union occupation during the Civil War. That animosity failed to deter a New Jersey lad of 23 who arrived in 1862 to sell whiskey to thirsty troops. Despite this problematic start, he became Alexandria’s mayor and a leading citizen while founding a liquor business that prospered until the advent of Prohibition.  His name was Emanuel Ethelbert (E. E.) Downham and his career ended in the financial sector. 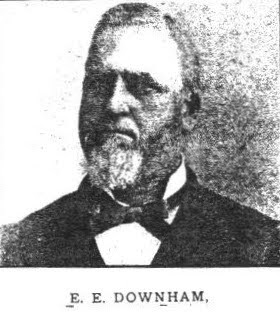 After arriving in Alexandria, Downham quickly established himself as a wholesale liquor dealer with a profitable business.  His promise as an “up-and-comer” must have been evident very early. In 1865, despite being a Yankee, he married the daughter of a leading Alexandria merchant.  He also became politically active, in 1874 seeking and winning seats on the City Council and Board of Aldermen, eventually becoming mayor of Alexandria in 1887, an office he held for four years. 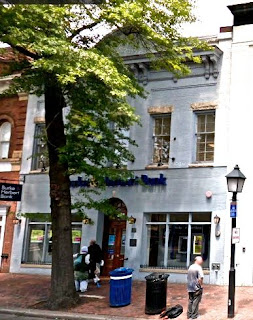 As Virginia came closer and closer to going “dry,” Downham changed direction and became a banker.  By the early 1910s his principal occupation had become president of the German Co-Operative Building Association, a financial organization located at 615 King Street.  This institution had been founded in 1890.  According to a local newspaper, the savings and loan association enjoyed “a steady patronage.”  The building, shown here, still stands in the city’s “Old Town” and is home to a bank.

Featured here are four whiskey men whose fortunes ultimately took them from operating liquor establishments to running financial institutions.  For some the onset of state and national Prohibition forced them into a new career.  For others the transition appears to have been a natural extension of their business interests.  In all cases their investments ultimately were fueled by money from selling whiskey.

Posted by Jack Sullivan at 7:35 AM