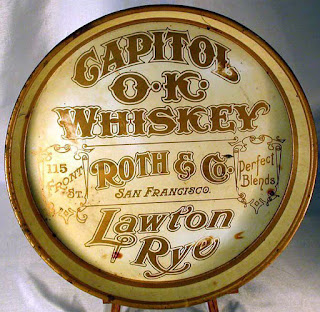 Roth & Company of San Francisco, founded in 1859 by Joseph Roth, survived for sixty years but Roth himself did not.  So potent was his reputation among California liquor houses that his successors maintained his name until shut down by National Prohibition in 1919.

Roth was an immigrant from Germany who arrived in San Francisco at an early date in its history.   Starting overnight as the base for the Gold Rush of 1849, the city quickly became the largest and most important population, commercial, naval, and financial center in the American West.  Roth was quick to recognize the potential for wholesaling whiskey in a town teeming with saloons and other “watering holes.”

Roth’s whiskey business originated about 1859, growing along with San Francisco’s development.  His first recorded address was 805-809 Montgomery Street in the Old Court House building, across from Pioneer Hall which was an early library and meeting place, insuring considerable pedestrian traffic in the area.  After a few years operating on his own, in 1867 Roth took Henry Videau as a partner.

Roth had made an interesting choice.  Later known as the “Prince of Restauranteurs,” Videau, born in 1823, had immigrated from France in 1849, drawn by the lust for gold, settling initially in Marysville, California.  By 1853 he was married and running a hotel there and later a restaurant.  By 1866 he was recorded as president of the Jefferson Mining Company, whose headquarters he soon moved from Marysville to San Francisco.

With mining possibly not paying off as Videau had expected, the following year he joined Roth in his liquor house.  The partners called themselves “Importers and Dealers in Fine Wines, Liquors, Brandies and Provisions.”  They also were selling liquor wholesale to local saloons and “rectifying,” that is, blending their own brands.  Their flagship label became “Capitol Whiskey,” trademarked in 1874, a very early registration, the legislation having been adopted by Congress only four years earlier.

Meeting with considerable success, the partners moved in 1873 to larger quarters at 214 and 216 Pine Street.  Their Capitol OK Whiskey, as show here, was sold in quart bottles of both clear and amber that held the Roth monogram, as well as in flasks that advertised the Pine Street address.  In 1876, Videau, likely interested in returning to the restaurant business, sold his share of Roth & Company to Herman L. Levy. 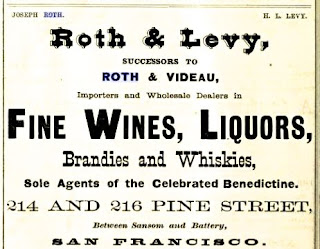 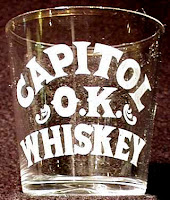 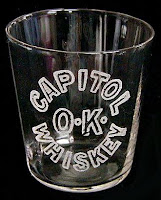 That partnership became Roth & Levy, advertising as “Importers and Wholesale Dealers in Fine Wines, Liquors, Brandies and Whiskies.”  To be successful liquor wholesalers recognized the value of giveaways to prime customers like saloons, restaurants and hotels.  The firm was noted for its saloon signs and shot glasses advertising Capitol OK.  Examples of both are scattered throughout this post. 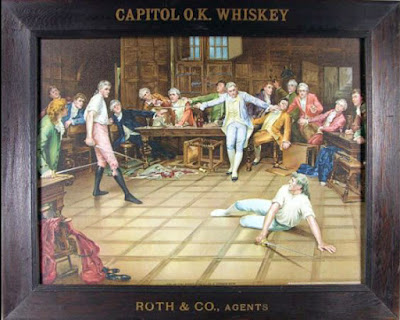 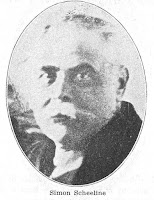 After three years partnering with Roth, Levy sold his half interest to Adolph Roos and Simon Scheeline.  Roos was a San Francisco businessman and Scheeline, shown here, sold general merchandise.  Both had immigrated from Germany as youths.  When Joseph Roth died in 1891, Roos and Scheeline bought his share and continued to operate the company under his name.

The new partnership continued vigorously to market Capitol OK whiskey, adding a second featured brand, “Lawton Rye.”  Shown here, front and back is a labeled flask of this whiskey, advertised as a “blend of straight rye whiskeys,”  likely compounded on company premises.  The Lawton Rye brand name was trademarked in 1906.  Other Roth & Company labels were “Concord BBB Blended Whiskey” and “Blue Grass Whiskey.” 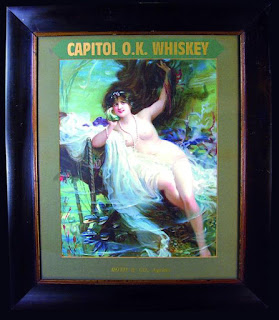 After Simon Scheeline died in 1901, his share of the liquor house devolved on members of his family, his wife Henriette (Leydecker) Scheeline and his 29-year-old son, Edwin.  The latter likely was already working for the liquor house, being schooled by his father in the business.  Some months later Roos retired, selling his share to mother and son Scheelines, who now owned Roth & Company outright.  They moved the business to 316 Market Street in 1904. 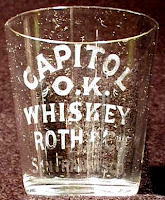 When the great San Francisco earthquake and fire of 1906 destroyed those premises, the Scheelines took only a few months before locating the firm at a new building at 117 Front Street.  That would be the address of Roth & Company from 1907 to 1919 when the Scheelines were forced to shut down by the arrival of National Prohibition.  Henriette Scheeline died later the same year.

Joseph Roth, Henry Videau, Herman Levy, Adolph Roos, Simon Scheeline, Henriette Scheeline, and Edwin Scheeline all played roles in the longevity of Roth & Co., a remarkable run in San Francisco of sixty years beginning before the Civil War and ending after World War One.  While the United States and the world had experienced dramatic changes, Roth & Co. had survived and prospered, providing future generations with an abundance of artifacts by which to remember it.