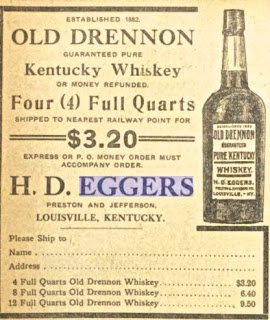 Try to put yourself in Herman Egger’s shoes.  In an overcrowded field of liquor dealers in Louisville, Kentucky, he was trying to distinguish himself and his “Old Drennon” whiskey by emphasizing mail order sales, asserting that for $3.20 he would ship four quarts to the nearest railway point of the buyer.   As more and more Kentucky counties under “local option” laws voted dry, however, he found his business rapidly dwindling. What could he do?

Adding to his problem was a quirk in the laws.  Kentucky banned Eggers from sending his whiskey to any county in the state that banned alcohol.  Because of the Interstate Commerce Clause of the Constitution, however, liquor dealers other states could send booze by railway express to individuals in those counties with impunity.  Federal courts all over the U.S. had upheld that right. 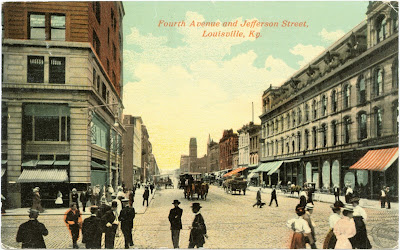 Faced with a dismal financial future, Eggers in 1912 from his Jefferson Street liquor house hatched a scheme to sell his whiskey to customers in officially dry Kentucky counties.  He composed and sent a form letter to doctors and druggists in “dry” localities asking them to help him.  In the letter the Louisville liquor dealer pointed out that for “medicinal purposes”  Kentucky law allowed licensed doctors and druggists to receive whiskey shipments in five gallons or less.  Eggers explained:  “There are a number of people in your neighborhood who would like to receive goods but cannot order within the state as the laws prevent shipments….If you will permit those who order to have goods shipped to you, without expense to you, it will be an accommodation to both of us.”

Eggers assured his potential collaborators that his proposal was within Kentucky law and urged them to write him with the names of friends who might be interested in shipments.  As a reward for their trouble in handling his liquor, cooperating doctors and druggists would be given one free gallon of whiskey for every ten gallons he shipped.  “I do not know if this would be legal,”  Eggers acknowledged, but went on to give detailed instructions how the process would work:

“Write on the back of this letter the names of those who may mail me an order in your name and have the goods go to you — they can call at your office for he package, or get it in your name, at the express office.  I will handle the shipments in such a way as to cause you no trouble, and your will receive a gallon of my very finest Old Drennon for your kindness, every time I receive orders for 10 gallons.”

Among the physicians who received Eggers’ letter was Dr. Thomas C. Holloway, an eminent gynecologist of Lexington, Kentucky, a town that intermittently had gone dry.   Dr. Holloway was caustic in his response to Eggers:  “As I have no intention of engaging in the whiskey business, I do not see what right you had to presume I would be interested in your bootlegging proposition.”

Branding Egger’s proposition as insulting, Dr. Holloways sarcastically added:  Since you doubtless find it profitable to deal with the weaker element of the medical profession, I wonder that you do not branch out a little and include the illegal sale and distribution of cocaine, morphine and some of the other deadly poisons which doctors are permitted to order and which unfortunate human beings often want.”

“As for sending you a list of my friends I must say that unless your whiskey is vastly superior to your ethics, I have no friends for whom I care so little as so expose them to either, and I feel it would be a cowardly way of getting even with my enemies.”

Dr. Holloway ended his broadside by asking Eggers how he had gotten his name and what justification he might have for thinking he would be interested in the Louisville liquor dealer’s scheme.  The outraged physician went further by sending the exchange of letters to the Kentucky Medical Journal, the state’s leading publication for doctors and druggists.  They published it under the headline “Forum” on September 1, 1912. 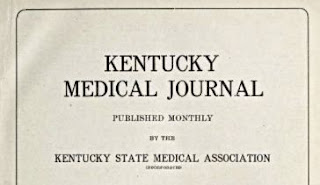 With Eggers’ scheme exposed, its utility was gone.  Even if tempted initially, the “weaker elements” of the medical fraternity, to use Holloway’s term, likely found themselves walking away from Egger’s proposition once it was widely known to the medical fraternity and likely revealed to law enforcement officials.  Moreover, Eggers had been exposed as someone willing to conspire to evade the law.

Herman Eggers was born in rural Kentucky in October 1857 to Johannes and Amalia Stutenbecker Eggers.  At the time of his birth his father was 18 years old, his mother was 14.  After an elementary education in local schools, Herman moved to Louisville sometime in the 1870s where he likely served an apprenticeship in one of the city’s many liquor houses. 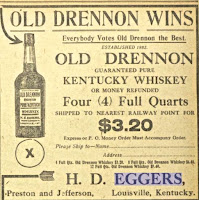 According to Kentucky records, Herman was married in 1881 in Louisville.  His bride was Elizabeth Henrietta  (called “Lizzie”) Simms.  Their union produced five children,  Herman Junior, born 1888;  Hiram — who became a doctor — 1890;  Eva, 1892; Helen, 1896, and Herbert, 1889.  Marriage may have provided the incentive for Eggers, age 25, to strike out on his own.  His advertising materials claimed 1882 as the origin of his company.

Egger’s establishment as described in public records appears to have been a combination liquor store, saloon and grocery.  He was known for heavily advertising his flagship brand, “Old Drennon.”   It likely was named for Joseph Drennon, an early Kentucky pioneer and the man who discovered the healing hot waters of Drennon Springs in Henry County.  Of this whiskey, Eggers boasted: “Old Drennon Wins…Everybody Votes Old Drennon the Best.” 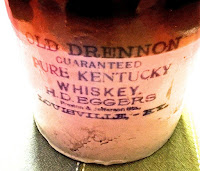 Eggers was not a distiller but was compounding his whiskey from product bought from in-state distilleries so that it could be advertised as the “pure Kentucky whiskey” he claimed it to be.  Blended to achieve a particular color, taste and smoothness, Eggers was selling Old Drennon wholesale in gallon and larger ceramic jugs, two variations shown here.  The one shown left featured a brown Albany slip top and a white Bristol glaze base on which a cobalt label has been under-glazed.  The example below combines the brown top with a basic salt-glaze finish.

For retail customers, Eggers packaged Old Drennon in labeled bottles with embossing on the glass.  These could be quart sized, as shown in his ads, or flasks in several sizes.  Note that in the flask below, Eggers identified his business as “wines and liquors.”  The 1910 U.S. census listed his occupation as “retail grocery & liquor.” 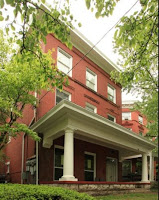 Those were prosperous days for Eggers who moved his growing family into a large house at 1181 East Broadway, a home big enough to accommodate a live-in servant woman.  Shown here, the house currently is divided into five apartments.

As the noose of National Prohibition slowly tightened around the Kentucky liquor industry,  Eggers phased out liquor and increasingly emphasized his grocery trade.   After Lizzie died in 1924, Herman, having reached his middle sixties, closed out his grocery business and retired.  The 1930 census found him at the East Broadway address, living with two unmarried adult daughters.  Eggers died in December of that year.  The cause given was heart disease.  He was buried next to Lizzie in Section 5, Lot 136, of Cave Hill Cemetery, a graveyard in which many Kentucky whiskey men are laid to rest.

I began this inquiry into the life of Herman D. Eggers by delving into his attempt to wet “dry” Kentucky with alcohol by convincing doctors and druggists into helping him reach customers in places where spiritous drink was outlawed.  It was a scheme blunted by Dr. Holloway’s scathing public response.  This leaves the nagging question of what effect, if any, the exposure of Eggers’ attempt at “bootlegging” had on his personal life and community standing.