For Charles Kaier “Liquor then Beer” Held No Fear 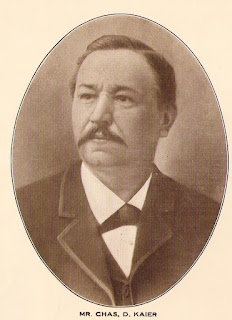 There is a popular saying among the imbibing public: “Beer then liquor, never been sicker; liquor then beer, have no fear.”  Charles D. Kaier of Mahanoy City took that philosophy to heart, and built a highly successful Pennsylvania brewery out of riches he earned by selling whiskey.

Kaier, shown right, was a German immigrant, born in March 1939 to Andras and Cresentia (Wittmer) Kaier in Binnigen, Baden-Wurttemburg.  Christened “Anselm Troian,” he anglicized his name after coming to the United States at the age of 16  in 1854 with his blacksmith father, mother, and four siblings,  Their two-month journey took them through France where they boarded the ship, Valanden,  at Le Havre to sail to New York City.  Initially settling in Norristown, Pennsylvania, the Kaiers subsequently moved to St. Clair, Pennsylvania, where Charles became a baker’s apprentice.

Of age militarily when the Civil War broke out, Kaier, perhaps luckily, was quick to respond.  As a private he enlisted in Company H (“Wetherill’s Rifles”) of the Ninth Regiment of the Pennsylvania Volunteer Infantry.  Although the war dragged on for four bloody years, military leaders of the Union initially thought the Southern rebellion would be put down quickly.  Early enlistments accordingly were for 90 days.  As a result Kaier joined in April, 1861, and was honorably discharged by July of that year.   In the meantime, he had seen no combat, simply providing garrison duty in Washington, D.C. 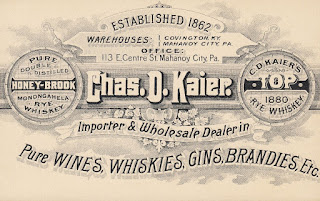 Although recruits were strongly urged to re-enlist, Kaier apparently had seen enough of military life and returned to civilian pursuits.  Now 22 years old,  he had the confidence to move to another town, Mahanoy City, Pennsylvania, and start his own liquor and beer business, an enterprise he called “Chas. D. Kaier Co.”  Part of Schuykill County, Mahanoy at the time was growing as a major center of anthracite coal production, with many thirsty miners to create a customer base.  The town, shown below, also was served by both the Lehigh Valley and Philadelphia & Reading railways, facilitating Kaier’s receiving whiskey supplies from the state’s distilleries and distributing his own products regionally.

Charles also found a wife not long after his military discharge.  In 1863 at St. Patrick’s Church in Pottsville, Pennsylvania, Charles married Margaret Curry, a 22-year-old schoolteacher whose Irish immigrant parents owned a hotel and restaurant in Pottsville. The Kaiers went on to raise six daughters and one son, Charles F., but tragically lost three others, all of whom died in childhood.

Kaier was buying whiskey by the barrel and likely “rectifying” it, that is, mixing and blending them in his own facilities at 113 East Centre Street to achieve particular taste and color.  For his wholesale customers, he was providing these spirits in gallon or larger ceramic jugs. For retail customers, the whiskey was decanted into quart bottles and smaller flasks.  As shown on the letterhead above, Kaier featured several proprietary brands, “Honey-Brook Monongahela Rye,” “C.D. Kaier’s TOP 1880 Rye” and “Kaier’s Special ‘A’ Whiskey.” 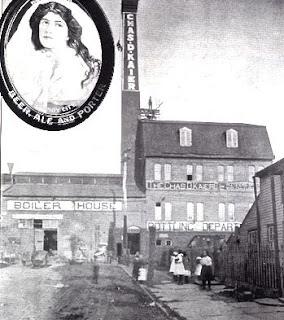 Initially, Kaier’s business chiefly was in whiskey, although he was a distributor for brewers.  With the growing wealth from his liquor business, he accrued sufficient capital to decide to open his own brewery.  In 1880 he convinced his cousin, Franz Kaier, to leave Germany and become the brewmaster in the new beer-making facility he was building in Mahanoy City.  The earliest known photo of Kaier’s Brewery, with an inset of an advertising tip tray, depicts the plant as it looked during the 1880s.
Meanwhile, Kaier was bringing his sons-in-law into the business.  Daughter Ella, the eldest, had married John B. Lieberman.  He became the brewery treasurer.  Daughter Josephine married Michael Haughney and he was appointed the company secretary.  A undated letter exists, to Kaier in Philadelphia from his daughter, Mary (known as “Mame”), who also was involved in corporate operations in Mahanoy City.  She informed him:  “Mike (likely Haughney) was in town all afternoon.  Everything is going on all right.  You need not be worried.”  Then she proceeded to tell him their Mahanoy bank account was $5,873.46 short. 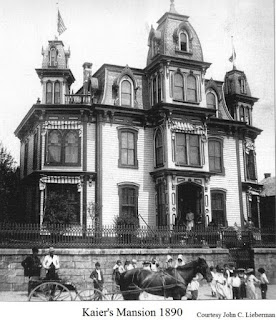 Kaier’s growing wealth allowed him to move his family into a stunning mansion in Mahanoy City.  Located at 729 East Center Street and shown here, he is said to have “spared no expense increasing a home to incorporate all the grandeur and elegance associated with the Victorian Era.”  Now on a register of historical sites as an excellent example of Second Empire Victorian style, it functions today as a bed and breakfast.

As shown on the letterhead above, Kaier incorporated making beer and his liquor business into one corporate entity.  When he expanded the brewery in 1892, he moved whiskey rectifying to the third floor of the beer bottling department.  In time Kaier’s enterprises grew enormously.  An artist’s concept of the complex shows that perhaps encouraged by his wife’s parents, he had moved into the hospitality business with a three story Kaier Hotel. On the illustration note the stables at right where the horses for his brewery wagons were kept and at left the train spur right to his warehouses. 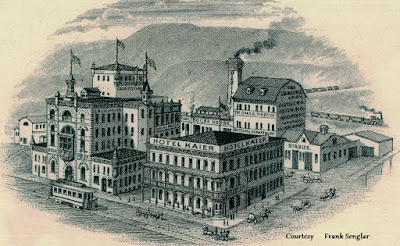 Growth, however,  was not without its incidents.  A plant superintendent and personal friend of Kaier’s named Philip Fuhrman, had accrued $25,000 in stock in the facility (equiv. $1 million today).  When he returned from an extended stay in Germany, Fuhrman professed shock and disappointment in what he alleged had been management lapses at the brewery in his absence.  He filed suit.  Unwilling to go to court, Kaier bought out the employee and fired him.   Moving to Shamokin, Pennsylvania, with his boodle of cash, Fuhrman and a partner started their own brewery in competition with Kaier.  Some speculated that had been Fuhrman’s objective all along.

Throughout his life, Kaier was known for a vision beyond business and family.  As one account says:  “Mr. Kaier gave  his time to charity and church work.”  It cited his membership in the Severn Post of the G.A.R., providing aid to returned Civil War veterans and their families, and, although not Irish, working with the Friendly Sons of St. Patrick in Philadelphia, providing assistance to Irish immigrants. Kaier also built and operated an opera house in Mahanoy.

As Kaier aged, his health declined.  He died in 1899 at the age of sixty.  With his  widow and children, with their families, gathered around the grave he was laid to rest at St. Fidelis Catholic Cemetery.  His monument is shown here.  After Charles’ death, management of the brewery and liquor establishment bypassed Lieberman and Haughney and fell to Kaier’s widow, Margaret, shown below, to the unmarried Mame, and to the only son, Charles F.  At the time only twenty, this Kaier later would become known as “Champagne Charlie” because of his extravagant and profligate lifestyle.  Despite being bypassed for ownership,  sons-in-law Lieberman and Haughney stayed on. 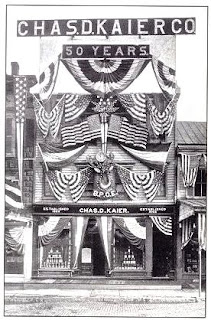 From the beginning this new and inexperienced ownership group found it difficult to manage the multiple enterprises Charles Kaier had built.  The trio tried unsuccessfully to sell the brewery in 1900 — only a year after the founder’s death — and again in 1903.  In 1902, the family celebrated the 50th anniversary of Kaier’s original store on East Center Street, with the B.P.O.E. (Elks) decorating the storefront with bunting and flags as part of the observance.

The trio were able to keep the beer and liquor enterprises afloat until 1913 when Mother Kaier died, leaving the company to Mame and Charles. Then all hell broke loose in the family in vicious court fights over her will.  Lieberman quit and moved his family to Allentown, Pennsylvania to work at his father’s brewery;  Haughney left to work as a salesman for a distillery.  By the time of National Prohibition, Mame and her husband had ousted her brother, Champagne Charlie, from ownership.  During the “dry” 14 years the company made soft drinks and, according to some accounts, bootleg beer.   After Repeal, the couple resumed making beer and the Chas. D. Kaier Co., eventually under other ownership, lasted an estimated 100 years.

That was the legacy of Charles Kaier,  an immigrant from Germany with limited education who created a major brewery made possible by profits from his earlier and continuing liquor sales.  After finding nothing risky in whiskey Kaier definitely had had no fear in embarking on beer.

Note:  Some of the material for this post and the brewery photo came from an article by John C. Lieberman in the Jan.-Feb. 2002 issue of the American Breweriana Journal, entitled “Charles D. Kaier — American Success Story.” Other information was derived from the website of the Mahanoy Area Historical Society.

Posted by Jack Sullivan at 6:18 AM