The Family Squibb and Their Indiana Whiskey

Although not famed for its whiskey as its neighbor Kentucky has been,  Indiana in the mid 1800s and early 1900s boasted a number of distilleries that achieved respectable regional and even national reputations for quality.  Among the earliest in the Hoosier State was a facility founded  by William P. Squibb and his brother.  Their work was carried on by Squibb’s sons and a nephew for a total of more than 50 years, until ended by National Prohibition.

William Squibb was born in 1931 near Aurora, Indiana, in Dearborn County  There he grew up, was educated, and registered for the Union Army in the Civil War, although no evidence exists that he served.  In Aurora he met his wife, Mary Frances Plummer.  Together they reared a family of ten children, four girls and six boys.  As a young man William worked in the grocery trade and the liquor business in Aurora, with brother George, opening a small distillery there about 1846.  Subsequently, the Squibbs moved down the road five miles to Lawrenceburg, Indiana.  There about 1869 they built a new distillery at Second Street near Main, the avenue shown below.  Calling it the W.B. Squibb Company, their plant could mash 300 bushels of grain a day. 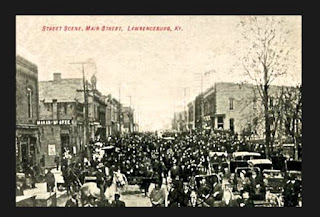 The Squibbs were advantaged by the “new age of industry” that followed the Civil War.  As one author put it:  “Hoosiers were at the center of this unprecedented growth.  By the end of the nineteenth century Indiana was among the top ten manufacturing states in the nation.”   At the center of this growth were the rail lines that crisscrossed the state.  Railroads brought the grain and other supplies needed for the Squibb’s distilling and then provided wide distribution for the finished products. 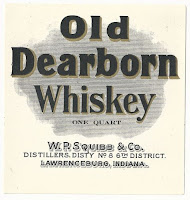 The brothers’ business grew constantly from year to year as word about the quality of their whisky spread.  In 1885 the Squibbs built a continuous still and, as the need arose, additional warehouses, including several bonded structures under U.S. supervision. 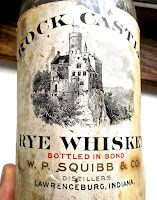 The ample supply of manufactured whiskey made it possible for the Squibbs' to feature multiple brands.  Among them were “Dearborn Mills Whiskey,”  “Rock Castle Rye,”  “Chimney Corner,” and “Greendale Whiskey,”  all trademarked in 1906.  Subsequently the Squibb’s added “Gold Leaf Rye,” trademarked in 1910.  The firm retailed its whiskey in glass quarts and flasks, with attractive paper labels. 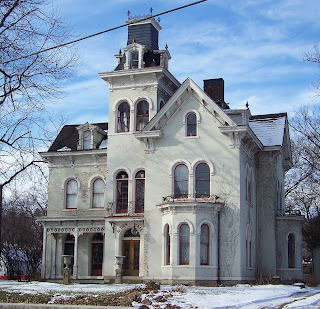 As Squibb’s family increased in size, William like many successful whiskey men, built them a large mansion, shown above.  Located on Manchester Pike in Lawrenceburg, the house was completed in 1876.  While not as elaborate as the castle shown on the Rock Castle Rye label, it bares some resemblance in its central tower, rounded windows, and peaked roofs. 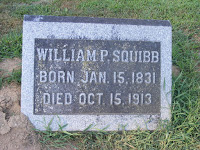 Together William and George piloted their distillery successfully for a period of some 50 years.  During that period, William’s sons had been taken into the business, working in various roles in management and sales.  Both the founders died in 1913.  William, age 82 at his death, was buried in Greendale Cemetery near Lawrenceburg.  His gravestone is shown here.  Wife Mary Francis, 45, had preceded him in death 25 years earlier.  With the deaths of the founding brothers a new generation of Squibbs, four sons and a cousin, took over the distillery.  They were Robert Lincoln, George L. P., Nathaniel Edmund, and Horace Greeley Squibb, and cousin Louis Foulk. 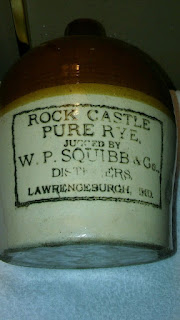 A 1915 publication entitled “A History of Lawrenceburg Township, Dearborn County, Indiana,” did short biographies of three Squibbs involved in the distillery.  The elder, George, born in 1869, attended public schools in Aurora and Lawrenceburg before leaving school at age fifteen to work at the distillery.  He literally grew up in the business and remained there, serving as secretary of the corporation.  Nathaniel followed the same path as his brother.  “He began at the bottom of the business and learned it from the bottom up.”   Nathaniel eventually became a sales agent for W. S. Squibb and ultimately its vice president.  The youngest, Horace, also went to work for his father at 15, later becoming a partner. Accounted an expert on cattle, Horace was in charge of the herd on the premises that were being fed spent mash from the distillery.

Each of these three Squibbs had families of their own.  George married Mina Louise Brand in 1900, a woman born in Lawrenceburg but educated in Louisville.  They raised a family of five children.  George served three terms as a school trustee in his community.  Nathaniel was married in 1901 to Elizabeth Hunter Carter, herself the daughter of a Kentucky distiller.  They had two children.  Nathaniel was said to have a charming personality which led to his business success:  “…For many years he has been regarded as one of the worthy, industrious and well-equipped young men of this section of Indiana.”  The biography for Horace emphasized his love of domesticity, home and family. He was married in 1908 to Edna Mae Weist, an Ohio native.  They had one son.  Of Horace, the biographer said:  “…There is accorded to him the fullest measure of popular confidence and esteem throughout the community.”

The new generation of Squibbs had moved quickly after taking control to build a new distillery on the site of the old one.  They continued in business until the coming of National Prohibition when their distillery production was forced to terminate.  Just before Prohibition ended in 1934,  Schenley bought the Lawrenceburg plant and folded it into a conglomerate with other facilities in Frankfort, Kentucky, and Fresno, California.   They called it Old Quaker Distilling, as shown here on a bottle. The motto of the whiskey was  "Old Quaker is in tune with today's growing preference for mildness and mellowness. You don't have to be rich to enjoy rich whiskey.”  Shown below in 1941, the Lawrenceburg plant later was used to make penicillin during World War II.

During Prohibition and after the sale of the distillery to Schenley, the Squibbs went on to other business pursuits.   George passed away in 1944 and was buried in Greendale Cemetery near his father and mother.   Nathaniel died a year later and also was interred there.  A tall monument, shown below, marks the Squibb family graves in Lawrenceburg.  Horace lived until 1953, by which time he had moved to Sonoma, California, where he is buried. 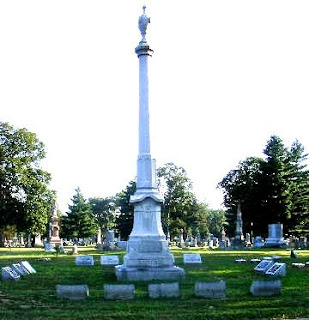 The Squibbs were a part of the wave of Midwest industrial growth that began after the Civil War and extended into the Twentieth Century.  For more than half a century, father, brother, and sons prospered in their enterprise, earned reputations in Indiana for business acumen, and were respected citizens of their Lawrenceburg community  — their standing based on the Squibb family making really good whiskey.