“What’s in a name?”  Shakespeare has Juliet ask.  Whiskey men thought long and hard about naming their brands, hoping that a attractive moniker would draw customers to their liquor.  John Bardenheier and his sons in St. Louis had a penchant for selecting names, including “Progress Rye,”  “Perfection Whiskey,” and particularly “Old Fashioned Honesty.”  Their merchandising of these brands throughout the Midwest and West led to forty-four years of business success. 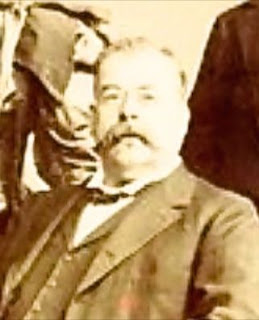 John Bardenheier, shown left,  first surfaced in Missouri business directories in 1873 as a partner in a St. Louis liquor firm called Bardenheier & Ochsner, located on Market Street.  By the following year, Ochsner had departed and the business had become John Bardenheier Wine & Liquor Co., the name it would bear until the end. This firm was a wholesaler and a whiskey “rectifier,”  that is,  blending and mixing raw product and perhaps adding ingredients to achieve desired taste and color.   The company’s three-story Bardenheier Building at 210-214 Market Street had ample room for a rectifying operation, as well as space to store and age the finished liquor.

Protecting its brand names, the company in 1905 trademarked Progress, Perfection, Old Fashioned Rye, and several other labels.  Those whiskeys were sold to retail customers in small pottery or glass bottles and in wooden barrels or in large ceramic jugs to wholesale buyers.   The latter, often saloonkeepers or bartenders, also could expect to be gifted with useful advertising items — a frequent merchandising strategy by wholesalers. 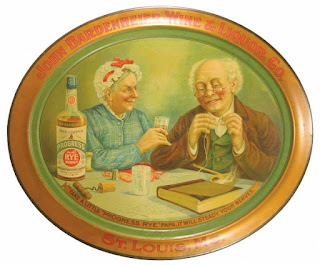 The Bardenheiers were noted for the serving trays they provided.  Shown here is one in which an elderly gentleman is striving, apparently unsuccessfully, to thread a needle.  His wife has opened a bottle of Bardenheier’s Progress Rye and is offering him a half tumbler of it, saying “Take a little ‘Progress Rye,’ Papa, it will steady your nerves.”  A second tray shows two elderly gents toasting each other from a bottle with another Bardenheier product.  It reads:  “We owe our perfect health to “Perfection Whiskey.” 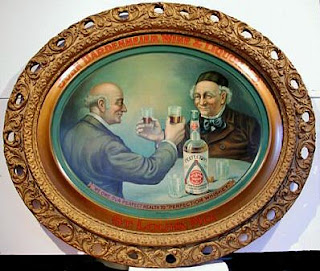 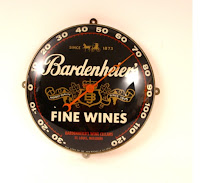 Wine also was a major component of Bardenheier’s business.  Coming as John did from the Rhineland, a principal German grape-growing and winery region, the company was both importing wines and buying it from the many area wineries.  The company bottled and labeled it, then marketed it widely. In just one year Bardenheier sold 1.5 million gallons of wine outside Missouri.  A giveaway thermometer recorded “Bardenheier’s Wine Cellar.”

The man behind this highly successful liquor business, John Bardenheier, was born in February 1844 in Oberlahnstein in Rhineland-Palatinate, Germany.   He emigrated to the United States in 1865, at the age of 21, settled in St. Louis, a city with a large German population, and became a naturalized citizen in 1870.  A physical description taken from a passport application described him as six feet tall, with dark hair and eyes.  His complexion was described as “fresh and hearty,” as he appears above.

Three years after arriving in the U.S., John married Elizabeth Schaub Stier, a native born Missourian and the daughter of Dionysius and Franziska Roederer Schaub.  She was a widow both of whose previous children had died in infancy.  John and Elizabeth would produce a family of nine, including three sons who upon maturity joined their father in the liquor and wine trade. 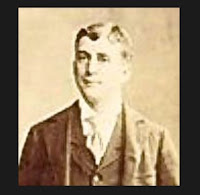 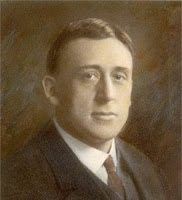 As he aged, Bardenheier trained his sons to take over his prosperous business.  The eldest, Charles, was sent to Christian Brothers College and then to a St. Louis business college.  After leaving school in 1881 and entering his father’s employ, Charles was sent for year to Europe, serving in a German wine house where he “learned the wine art in all its branches, including the art of preserving and keeping wines.”   His younger brother, John Henry, shown left, followed the same educational route, then entered the business in 1889.  He was sent to California, where among Italian Swiss Colony vintners he learn how good American wines were made and preserved.  The youngest brother, Joseph Anthony, right, trod the same educational path of his brothers, entering the firm in 1894 as the assistant secretary. 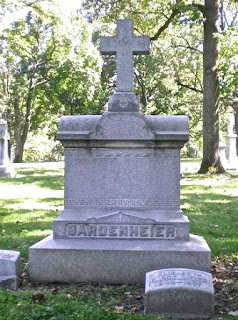 In June 1905, John Bardenheier who was on a visit to Germany, died there, apparently of complications from diabetes.  In a death notice that identified him as “the well-known St. Louis businessman,” the St. Louis Post Dispatch reported that his wife and daughter had sailed to Hamburg to bring back his body.  Both John Henry and Joseph later met their mother and sister in New York to accompany their father’s body back to St. Louis.  After his funeral Bardenheier was buried in Calvary Cemetery, near the family plinth, shown here. 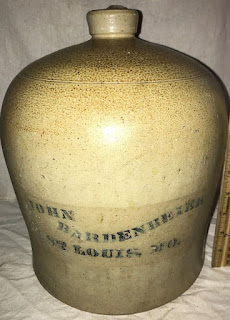 Upon their father’s death his three sons managed the business. Charles became the president and treasurer,  John Henry, the vice president, and Joseph, full secretary.  In addition to successfully merchandising Progress, Perfection and Old Fashioned Honesty whiskeys, all three men became noted figures in St. Louis business and social circles. Charles, married with one daughter, was active in the Prairie Slough Hunting and Fishing Club.  John Henry, married with no children recorded, had memberships in the Eagles, Knights of Pythias, and the Traveler’s Protective Assn.  Joseph, the father of six,  was active in the Liederkranz Society, a German singing and cultural club.  All three merited significant biographies in the 1912 publication, The Book of St. Louisans.

With the coming of National Prohibition in 1919, the Bardenheier brothers were forced to shut down their liquor and wine operations some forty-four years after its founding by their father.  With Repeal, Joseph Bardenheier reopened the business, locating it at several addresses in St. Louis.  The firm became one of the oldest and largest family-owned wineries in America, operating in some 39 states.  The winery was sold in 1983 and closed about ten years later.