Gregor Meyer and the Origins of a Rare Whiskey Jug 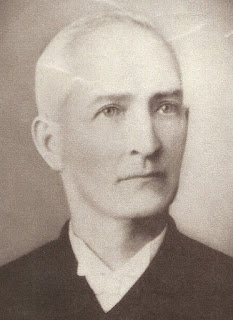 Just before the end of the 19th Century, a wholesale liquor dealer named Gregor Meyer, shown left,  apparently looked down Ohio Street from his Allegheny, Pennsylvania, business and saw that for several years running a competitor had featured fancy porcelain whiskey jugs that prominently bore his name.  “I can do that too,” Meyer decided, and subsequently commissioned a china bottle that is one of America’s most rare. 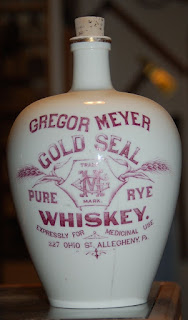 Shown here, it bore a purple overglaze transfer on a hotel china white body  that advertised “Gregor Meyer Gold Seal Pure Rye Whiskey” and declared that the contents were “strictly for medicinal use.”  The jug has a monogram of Meyer’s initials as a trade mark and a gold ring around the neck.  The item also has as its handle the signature “snake eating its tail” and a base mark that reads, K.T. & K, representing the Knowles, Taylor & Knowles pottery of East Liverpool, Ohio. Meyer also issued one in green, shown below: 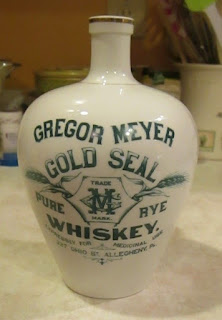 The company, in operation from 1854 to 1930, began to make these whiskey jugs during the late 1800s when a K.T. & K. employee named George Meredith quit the pottery to become a liquor dealer featuring his own proprietary brands.  Meredith wanted a distinctive package for the widely-advertised whiskey he called “Diamond Club.”  At the time, K.T.& K. was making white “hotel china” blanks for both amateur and professional ceramics painters, a fad at the time.  Meredith talked management into using them as a base for a jug of his own label design.  So packaged, “Diamond Club”  was a huge success with the drinking public and Meredith issued thousands of them. 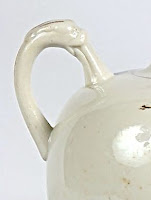 The Ohio pottery, shown below, subsequently decided to advertising these containers generally to the whiskey trade and found customers from approximately twenty distilleries and wholesalers across America. Because these jugs were relatively expensive compared to common stoneware or even glass bottles, the cost probably discouraged wider sales in the liquor industry. 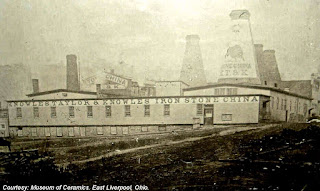 Nonetheless, Gregor Meyer was moved to commission one.  He had been born in Switzerland in 1830 and came to the United States when he was 18 years old.  He settled in Allegheny, Pennsylvania, a town adjacent to Pittsburgh, and annexed by it in 1907.   Initially Meyer went to work in a butcher shop.  Striking out on his own several years later, he opened a meat market and grocery store, one that likely sold liquor as most groceries did in those times. 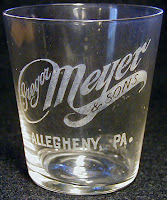 Apparently determining that booze paid better than bean soup, Meyer left the grocery trade in 1883 and opened a wholesale liquor business at Ohio Street and Madison Avenue in Allegheny.   Before long he became recognized as one of the leading wholesale liquor dealers in the Pittsburgh area.  Part of his success may have been his generosity in providing giveaway items to his customers.  He provided his wholesale customers — saloonkeepers and bartenders — with advertising shot glasses.  For the retail trade he handed out Indian head pennies encased in aluminum.   Shown here front and back with four leaf clovers and horseshoes, these were good luck charms, meant to be stuck in a pocket.

None of this explains why Meyer opted for a fancy jug for his whiskey.  My theory is that he likely was influenced by a competitor down the street.  Gregor’s shop was at 227 Ohio Street.  Two blocks away at 44 Ohio stood the liquor store of John Limegrover Jr.  Over time Limegrover issued three K.T.& K. jugs each advertising a different whiskey — Gibson and Dougherty of Pennsylvania and Sherwood of Maryland.  His Gibson jug is shown here. 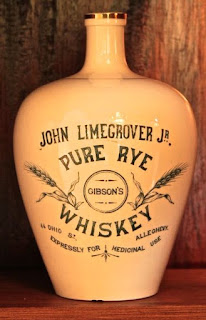 The possibility exists, of course, that Limegrover might have been imitating Meyer, rather than the other way around.  My evidence on who was first to adopt the fancy containers is largely based on the addresses shown on the jugs themselves.  Limegrover moved from the location noted on his jugs, as on the one shown here, before 1898.  His three examples had to come prior to that date. Meyer was still at his Ohio Street address on his jug in 1899 and thus my assumption is that his jug followed.  Meyer seemingly did not make many of them, leading to their being highly rare today. 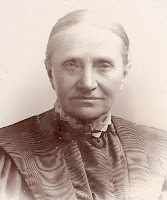 Meyer’s jug predates his incorporating two of his sons, Joseph J. and Adolph H., into the business and ultimately changing the name of the firm to Gregor Meyer & Sons.  That occurred after 1900, dating the Meyer jug to the very end of the 19th Century.  Note that the shot glass above was issued after the sons came aboard. They were two of Gregor’s seven children.  His wife, shown here, was Margaret Lavo Meyer.  For his family Meyer built a home in the attractive Troy Hill area of Allegheny, shown below. 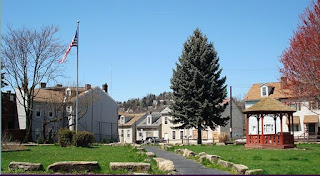 Some additional information will help round out the personality and character of Gregor Meyer. It was reported in his obituary that he was “identified with the early development of the city” and well-known in financial circles. He was president of the Real Estate Loan & Trust Company from the time of its organization until it was absorbed by another financial institution.  Meyer also took an active interest in civic affairs. He represented the 13th Ward on the Allegheny Select Council for several terms and for many years was a member of the school board of his ward.  When he died, Gregor Meyer was buried in St. Mary Catholic Cemetery in Allegheny County.  His gravestone is shown here. 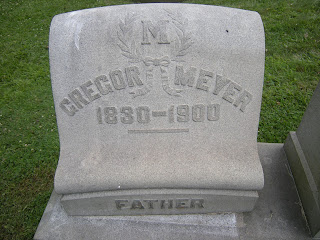 Note:  Thanks to Jay Hawkins, a Pittsburgh bottle collector, for permission to use the photo of this “rare find” jug in his collection.  Since this was written another Meyer KT&K jug has come to light in Pittsburgh, this one in green.  For anyone seeking further information on the three brands of whiskeys John Limegrover advertised, I previously have posted articles on each distiller:  Sherwood, July 2011; Dougherty, January 2012; and Gibson, July 2014.