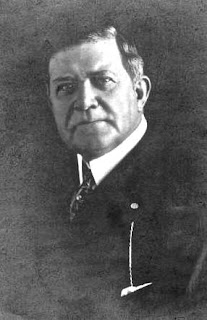 When two unrelated Kentucky colonels, both named Taylor, were engaged in the distilling trade, conflict might have been inevitable.  That was the case when Marion Elliott Taylor named his whiskey, “Old Kentucky Taylor,” thereby approximating the name under which Edmund Haynes Taylor, a major figure in Kentucky distilling, successfully been had marketing his bourbon. Col. Marion lost that fight but, in the end, losing might not have mattered much.

Col. Marion was born in Louisiana, of native Louisianan parents.  His birth date variously was given on U.S. census forms as 1850 and 1852, and on his gravestone as 1855.  An 1893 passport application described this Taylor as standing five feet, eleven inches tall, with brown hair and blue eyes.  From his photo at right he looks like a genial enough chap.  Sometime after the Civil War, Col. Marion found his way to Kentucky.  Col. Edmund sneered that his rival had “immigrated” to the state “and began to simulate our product” twenty-five years after he (Col. Edmund) had been making good Kentucky bourbon.

Col. Marion first surfaced in the liquor trade in 1886 as a partner with John J. Wright in a Louisville wholesale house called Wright & Taylor, located initially at 220 Second Street.  The company quickly became well established with whiskey brands that included “Pride of Louisville,” “Cane Spring,” and “Old Logan.”  Likely needing more space because of their rapidly expanding business, the owners in 1891 moved to 137 Third Street.

Like many wholesalers who were featuring their own whiskey brands, Wright and Taylor seemingly often found themselves stymied in obtaining adequate supplies of raw product.  As a result in 1892 they purchased the Old Charter Distillery (RD#266, 5th Revenue District of Kentucky).  This whiskey-making plant had been established in 1874 by A.B. Chapeze on the Bardstown-Springfield Branch of the Louisville & Nashville Railroad. [See my post on the Chapezes, June 2015].

The partners bought a facility from the Chapezes that although largely of frame construction was a going operation, capable of mashing some 260 bushels of grain daily.  In addition to the distillery itself, it had three frame warehouses with shingle roofs, one of which was vacant and another used to store spent mash for cattle feed.  Only one bonded warehouse was on premises, of iron-clad construction and located 100 feet east of the still.

Col. Marion and his partner quickly set about upgrading the property, tearing down old structures and constructing new ones, shown above.  At some point prior to 1895, Col. Marion purchased John Wright’s interest in the distillery, but continued operating under the Wright & Taylor name.  In time the plant daily mashing capacity was increased to 600 bushels.  This allowed Col. Marion to produce “Old Charter,” a brand name purchased from the Chapezes, and to add other proprietary labels, including “Dunmore,” “Elliott Reserve,” “Kentwood,” “Redwood,” and “Taylor’s Golden Rye.”  He bottled these brands in amber glass containers, both quarts and smaller flasks, embossed with the company name and “Louisville.” 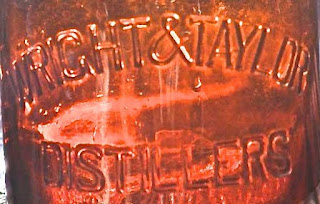 Meanwhile, 55 miles down the road in Frankfort, Col. Edmund was training a gimlet eye on what this other Taylor was selling.  When Col. Marion began marketing a brand he called “Fine Old Kentucky Taylor,” Col. Edmund exploded, claiming that it infringed on his similarly named “Old Taylor.”  In 1903 he took his Louisville rival into Jefferson County Circuit Court seeking $100,000 in damages (more than $2.5 million today) and an injunction on further marketing of Old Kentucky Taylor.  He claimed that Col. Marion’s whiskey, a blended and to his mind “inferior” product, was creating confusion among consumers with his quality straight bourbon.

Col. Edmund may have made a mistake by suing in a Louisville court.  Local judges almost everywhere were reluctant to find against a resident businessman on trademark issues and Col. Marion, despite his Louisiana origins, had become highly regarded in Louisville commercial circles.  The decision gleefully was quoted in an ad, shown above, that Col. Marion placed in the Wines & Spirits Journal, a leading trade publication.  He quoted from the court decision: “The defendant, Marion E. Taylor (Wright & Taylor) in branding his bottles, cases, packages and barrels with the trade mark “Taylor,” or “Old Taylor,” or “Kentucky Taylor,” or “Fine Old Kentucky Taylor,” had a perfect right to brand them.”  The judge went on to deride Col. Edmund’s claim of priority of adoption, dismissed the case and charged him court costs.

Gloating on the part of Col. Marion was short lived.  Subsequently Col. Edmund took his case to the Kentucky Court of Appeals in a case known as “E.H. Taylor, Jr. & Sons Co. v. Marion E. Taylor.”  This time Col. Edmund got some satisfaction.  Although the court denied damages and allowed Col. Marion to continue to use the Old Kentucky Taylor brand name, it granted an injunction that required that he advertise it as a blended product, thereby presumably reducing likelihood of confusion with Old Taylor.  The court also found that Col. Marion “intentionally” had tried to mislead  the public through his advertising practices.  As shown below, some Col. Marion ads subsequently hewed the court line: Old Kentucky Taylor was described as a blend.

None of this completely mollified Col. Edmund.  He continued to pursue action against Wright & Taylor.  In 1907 he got a ruling from a more understanding Jefferson County court granting a “perpetual injunction” against any advertising of Old Kentucky Taylor that failed to mention that the whiskey was blended or “rectified.” In 1909 Col. Edmund achieved a ruling from the Commissioner of Patents in Washington, D.C., that Col. Marion’s product “from its inception has been deceptively labeled.”  Six months later The U.S. Court of Appeals in D.C. agreed, adding:  “And it is unfortunate that one honestly complying with the law [i.e.,Col. Edmund] is compelled to suffer at the hands of ‘commercial sharks.”  Piling on, the U.S. Attorney General in a report to President Theodore Roosevelt alluded to “fraud” on the part of Wright & Taylor. 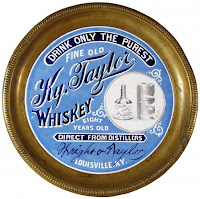 None of this support, however, assuaged the ire of Col. Edmund against Col. Marion.  In 1913, responding to an Old Kentucky Taylor ad in Mida’s Criterion, a liquor industry journal, he paid to publish a full page open letter in a competing journal to flay what he called “a fraudulent reading notice.”  Col. Edmund contended: “The courts of Kentucky, the District Court of Appeals at Washington and two departments of the Federal Government have pilloried these compounders for this very type of fraud upon our pure Kentucky-distilled Old Taylor.”  He added that he was initiating new proceedings against Wright & Taylor for “contempt of court.”

Although Col. Marion could not have been happy about repeatedly defending himself before the bar of justice with its costs in money and time, his rival’s vendetta seems never seriously to have impeded his progress in the whiskey trade and elsewhere.  During this period he continued to expand the Old Charter Distillery, increasing its mashing capacity to 1,000 bushels daily and its warehouse storage space to 36,000 barrels.

In another sign of success, by 1894 he had moved his headquarters to Louisville’s “Whiskey Row” on West Main Street where top Kentucky whiskey men kept their offices.  Like his successful colleagues, Col. Marion also was generous in giving advertising items to favored customers, including back-of-the-bar bottles, shot glasses, and serving and tip trays.  Examples are shown throughout this post. 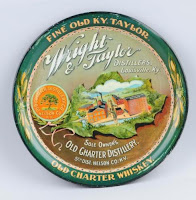 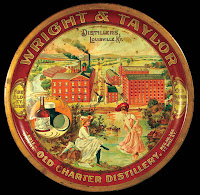 Nor did the wrath of Col. Edmund have any apparent effect on Col. Marion’s standing in his own community.  When citizens decided to build a statue to honor a beloved former Confederate general who was active in Louisville civic affairs, Col. Marion was chosen to head the committee raising the funds and supervising the project.   Along with other Kentucky worthies, he was a delegate to a statewide group formed to plan and build the Kentucky pavilion at the 1903 Louisiana Purchase Exposition in St. Louis.  Moreover, the author of the pamphlet History of Kentucky Distilling fantasized that “our gracious friend” Col. Marion would be appointed U.S. ambassador to England by President Theodore Roosevelt and there able to promote Kentucky whiskey. 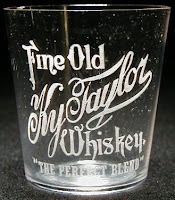 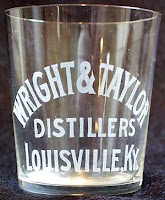 The coming of National Prohibition laid blows indiscriminately  on both colonels, as both were forced to shut down their distilleries and wholesale liquor enterprises.  In the 1920 census, Col. Marion gave his occupation as “merchant - real estate,”  evidence that he had been buying local properties with his ample wealth.  He died a year later, just a few days short of his sixty-sixth birthday, given the dates on his tombstone, and was buried in Louisville’s Cave Hill Cemetery where many notable whiskey men are interred. 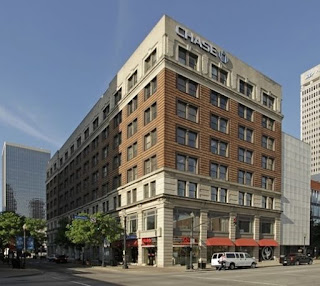 Although he is gone, Col. Marion is far from forgotten in Louisville.  Built in 1906 the Marion E. Taylor Office Building at 312 South Fourth Street is a downtown landmark of eight stories.  Over the years it has held several financial institutions and offices for dozens of attorneys and other professionals.  Over in Frankfort I have been unable to find any memorial to Col. Edmund to compare to the man he pilloried as “discredited” and repeatedly accused of fraud.  Seemingly, in the final analysis, Col. Edmund’s attacks meant little in the life of Marion Elliott Taylor.

Note:  I have chronicled the career of Edmund Haynes Taylor Jr., including other legal battles he fought, in a post of January 2015.  Additionally, while researching Col. Marion, I came upon the “Sipp’n Corn blog, a website devoted to the Kentucky whiskey industry as viewed through the many lawsuits it engendered.   In December 2013 the author also recounted the legal battles of the two colonels and did it well.  Take a look.

Posted by Jack Sullivan at 6:15 AM